Brazil, the World Cup host and the clear favorite (in our view), will start off the tournament Thursday with a match against Croatia. Soon after, 30 other countries will take to the pitch with varying prospects of achieving their World Cup dreams. See the FiveThirtyEight World Cup predictions for more on that.

But first: a brief tour of World Cup history. We wanted to answer a few basic questions: How often do favorites win? How often do host nations win? Is the spread of soccer talent throughout the world becoming more top-heavy or more even?

The 20 charts below provide some answers. They rank each team that entered the World Cup based on its Elo ratings before the tournament.

These Elo ratings, which were adopted from a system developed for chess, have relatively little meaning in an absolute sense. We could say, for example, that Italy has an Elo rating of 1879 — but it’s not clear what you’d do with that.

The Elo system is set up such that the average team has a rating of 1500. There are more than 200 countries that field national soccer teams, however, so being average (as Cape Verde or Trinidad and Tobago are, according to Elo) won’t normally get a team into the World Cup field, much less win it the trophy.

The charts include one other important adjustment: We’ve given a 100-point bonus, in accordance with the Elo system’s recommended value, to the host nation.2

The 1930 World Cup, the first on our tour, was one where the home-nation adjustment makes a difference. Held in Uruguay, it was composed mostly of teams from the Americas; few European nations were willing to make the journey. Argentina and Uruguay were the two best teams in the field by some margin, with Argentina just slightly ahead in the Elo ratings. But Uruguay’s home-nation status was enough to make it the favorite. The two met in the finals in Montevideo, with Uruguay winning 4-2. More surprising: The United States and Yugoslavia won their groups and advanced to the semifinal, ahead of the higher-rated Brazil and Paraguay. 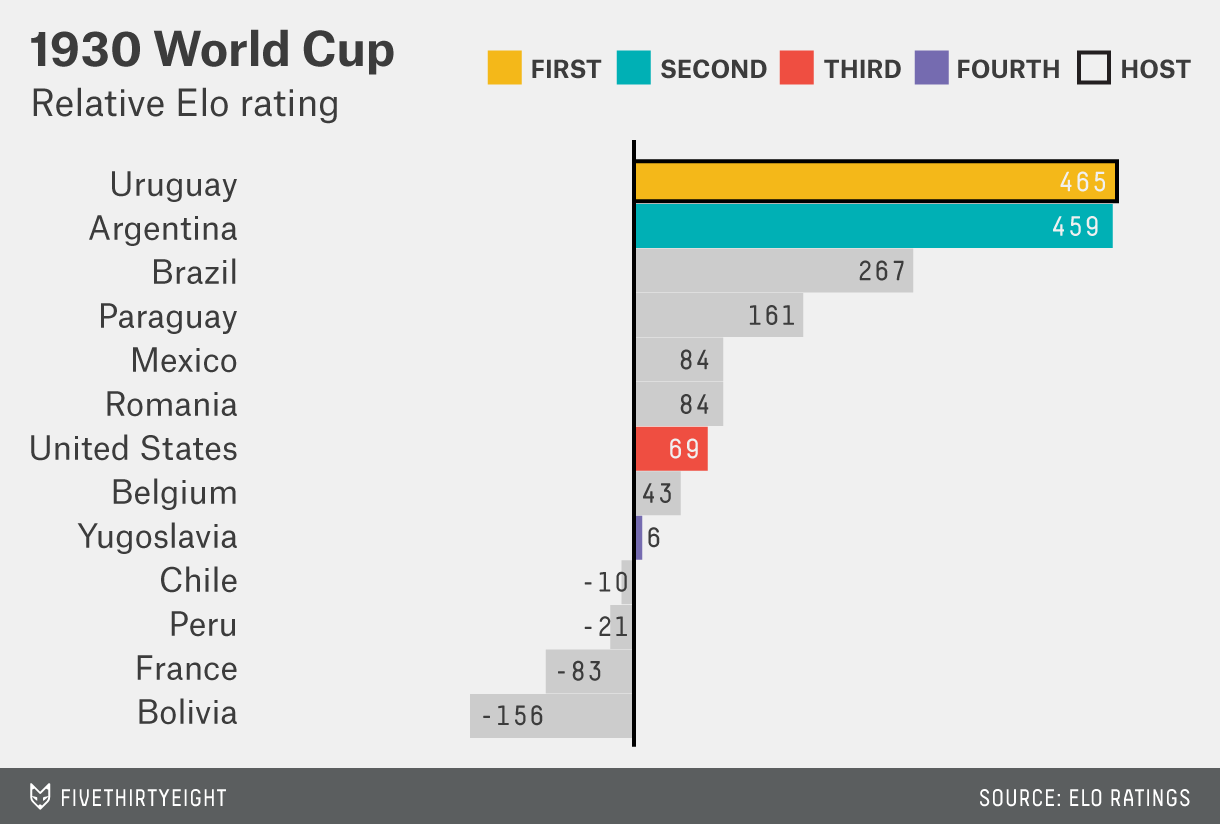 Italy played host to the 1934 World Cup. Several South American teams, including Uruguay, declined to participate, as did the countries of the United Kingdom. Overall, however, the field was deeper and had more parity than four years earlier. Italy, Argentina and Austria would essentially have been co-favorites before the tournament began, with Italy slightly ahead on the basis of the home-country effect. Indeed, Italy won. 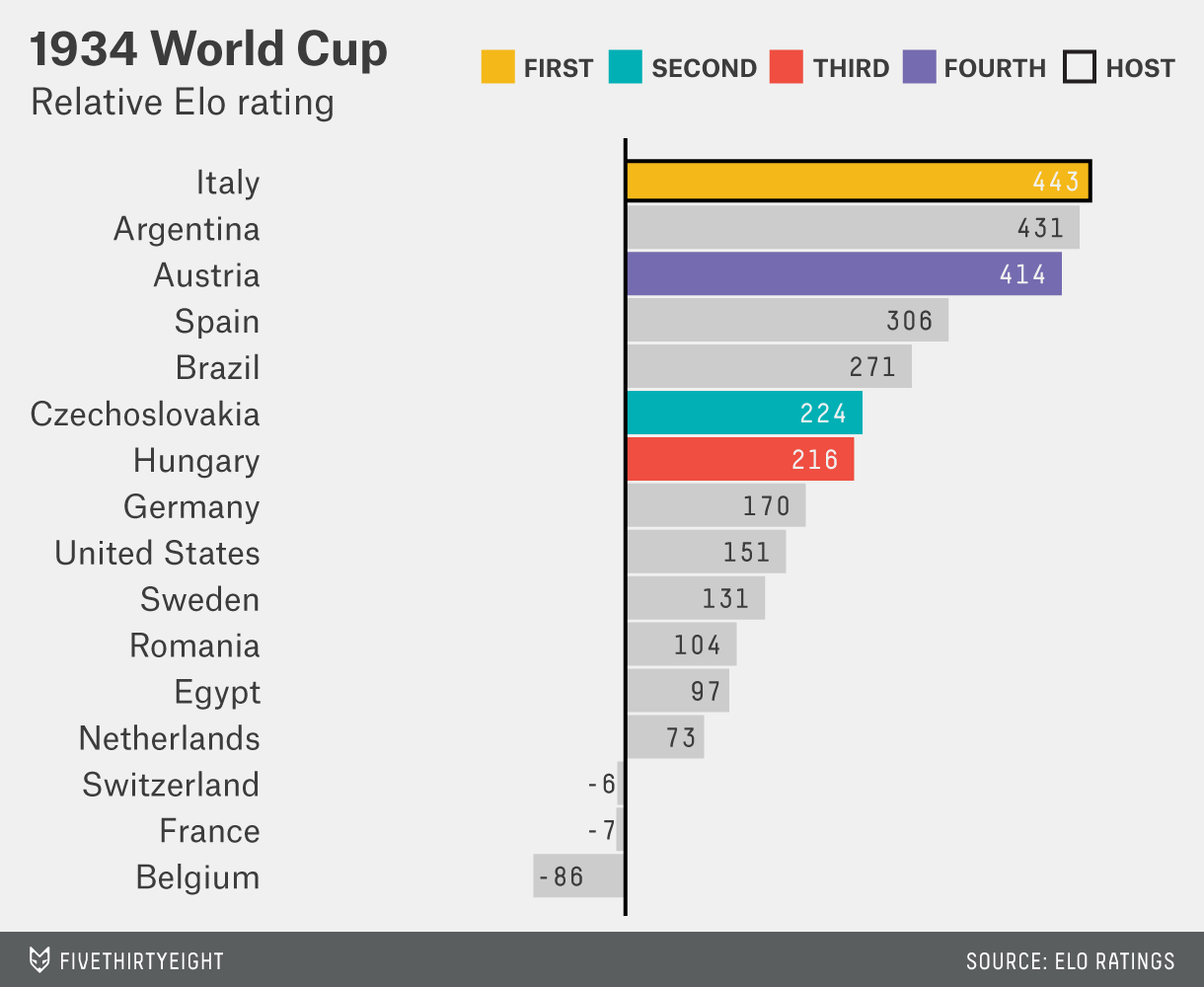 Italy was also the favorite in the 1938 World Cup, which was played in France under the cloud of creeping European fascism. Italy was a clear favorite because Argentina, No. 2 in the Elo ratings at the time and disappointed that Europe had hosted two World Cups in a row, refused to participate. Italy won, keeping the streak alive for Elo favorites. 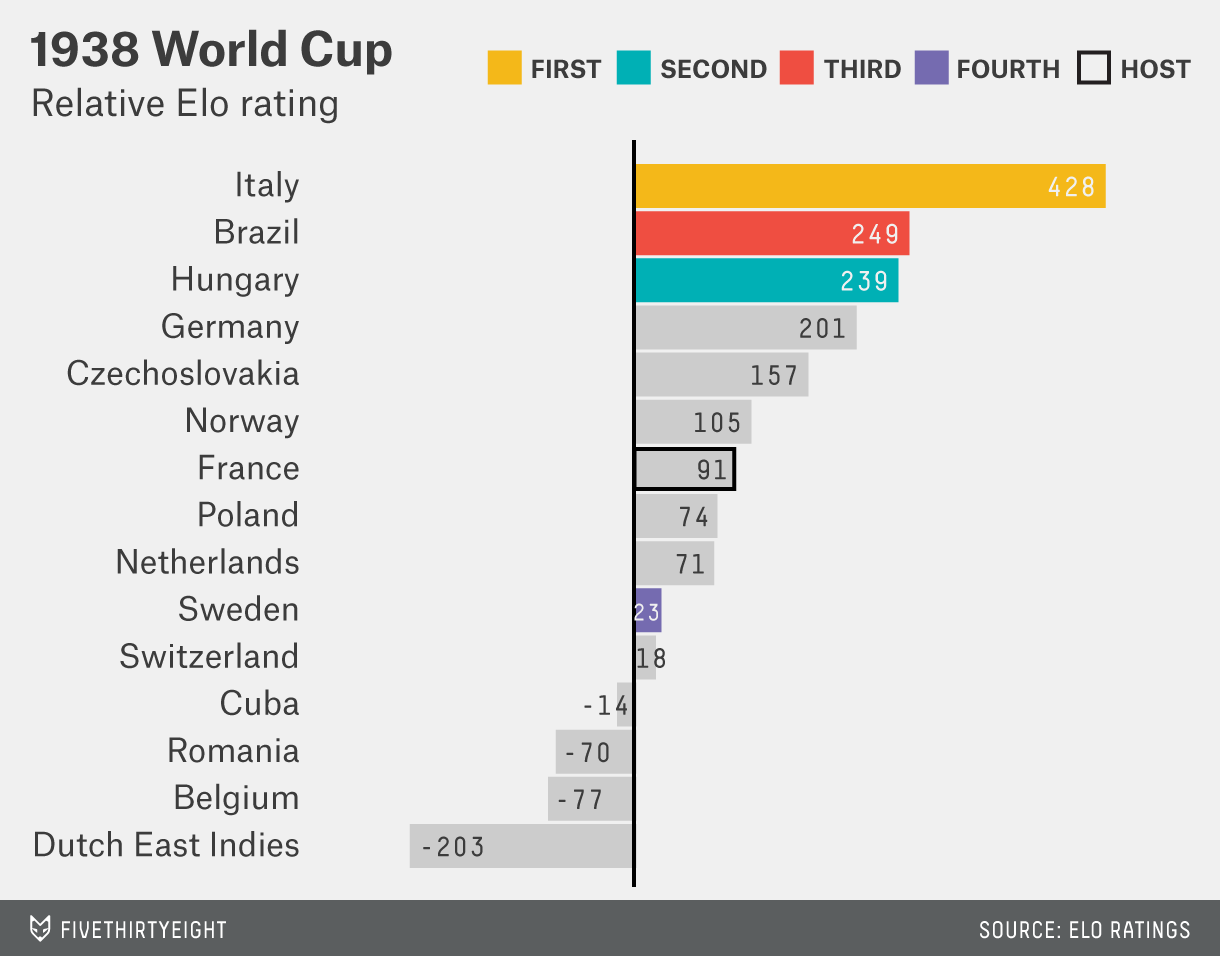 But when the World Cup returned in 1950 after a 12-year hiatus because of World War II and its aftermath, there was a surprise in store. Brazil hosted the tournament and, with its home-country boost, would have been the slight favorite per Elo. But it was a deep field — with England participating for the first time, and strong entrants from Italy, Sweden and several other countries (although Argentina again declined to enter). Uruguay, just the ninth-best team in the field, according to Elo, prevailed in a famous upset. 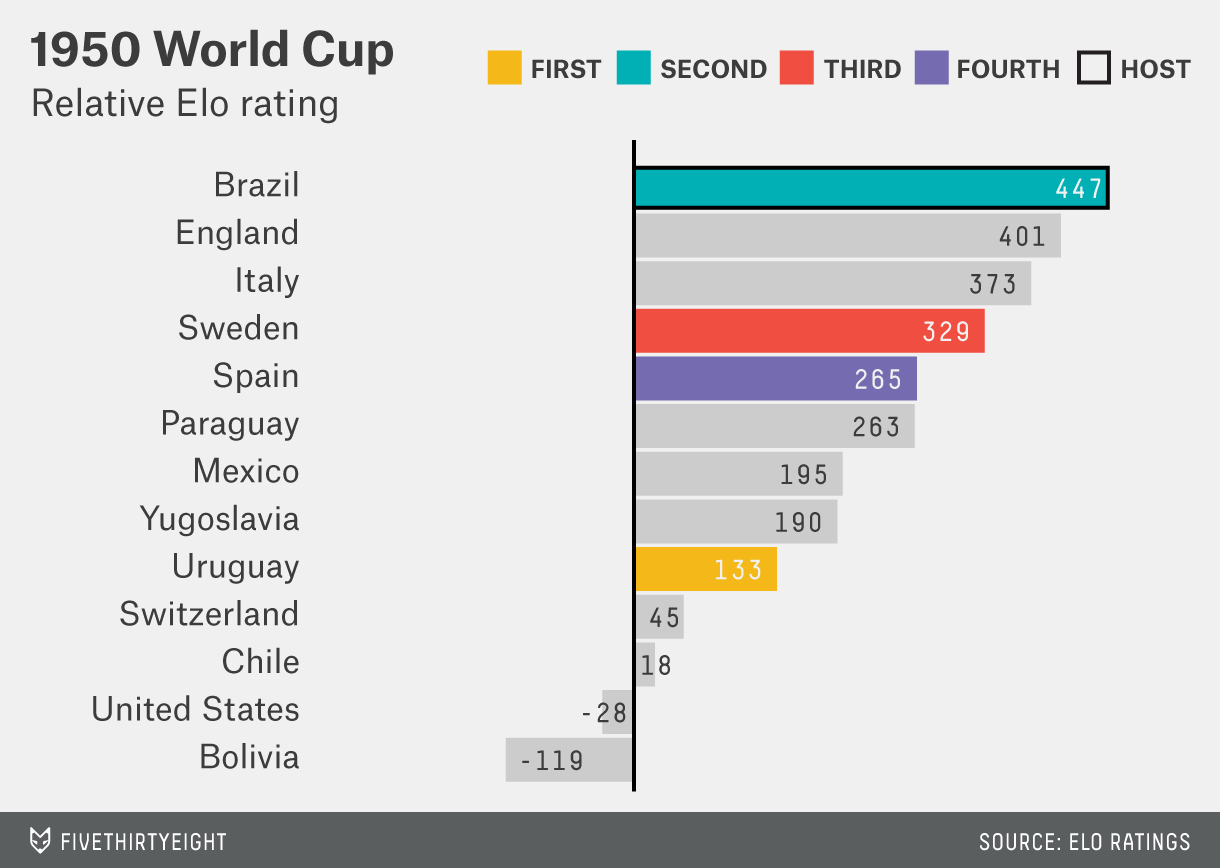 We’ll accelerate our pace a bit now that we’ve gotten the hang of this. The 1954 World Cup, held in Switzerland, featured another famous upset in the final, with West Germany defeating heavily favored Hungary in the so-called Miracle of Bern. 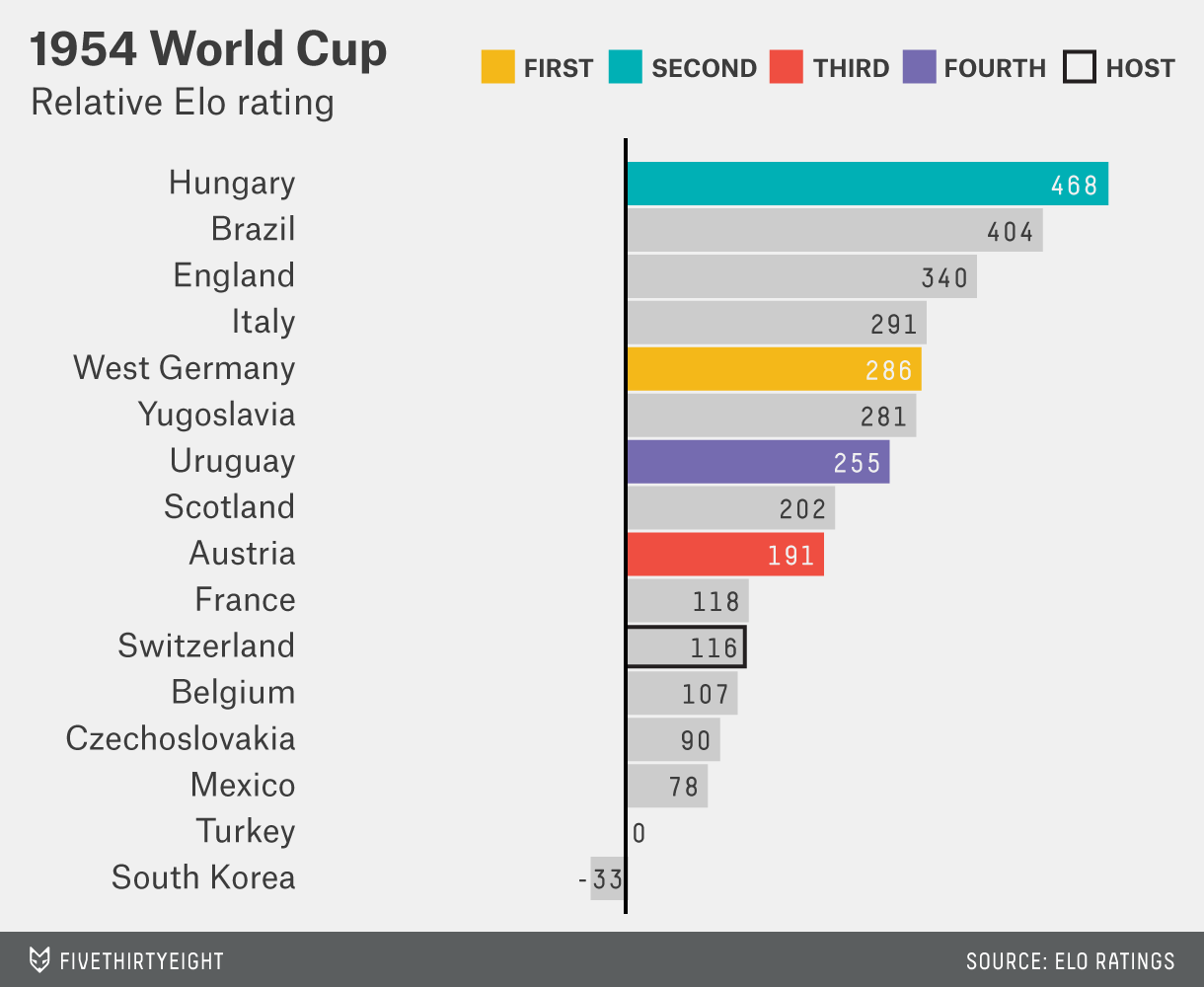 The 1958 World Cup featured a deep and competitive field. Hungary or Argentina would probably have been the favorite, but Brazil and England were not far behind them. Brazil won for the first time. 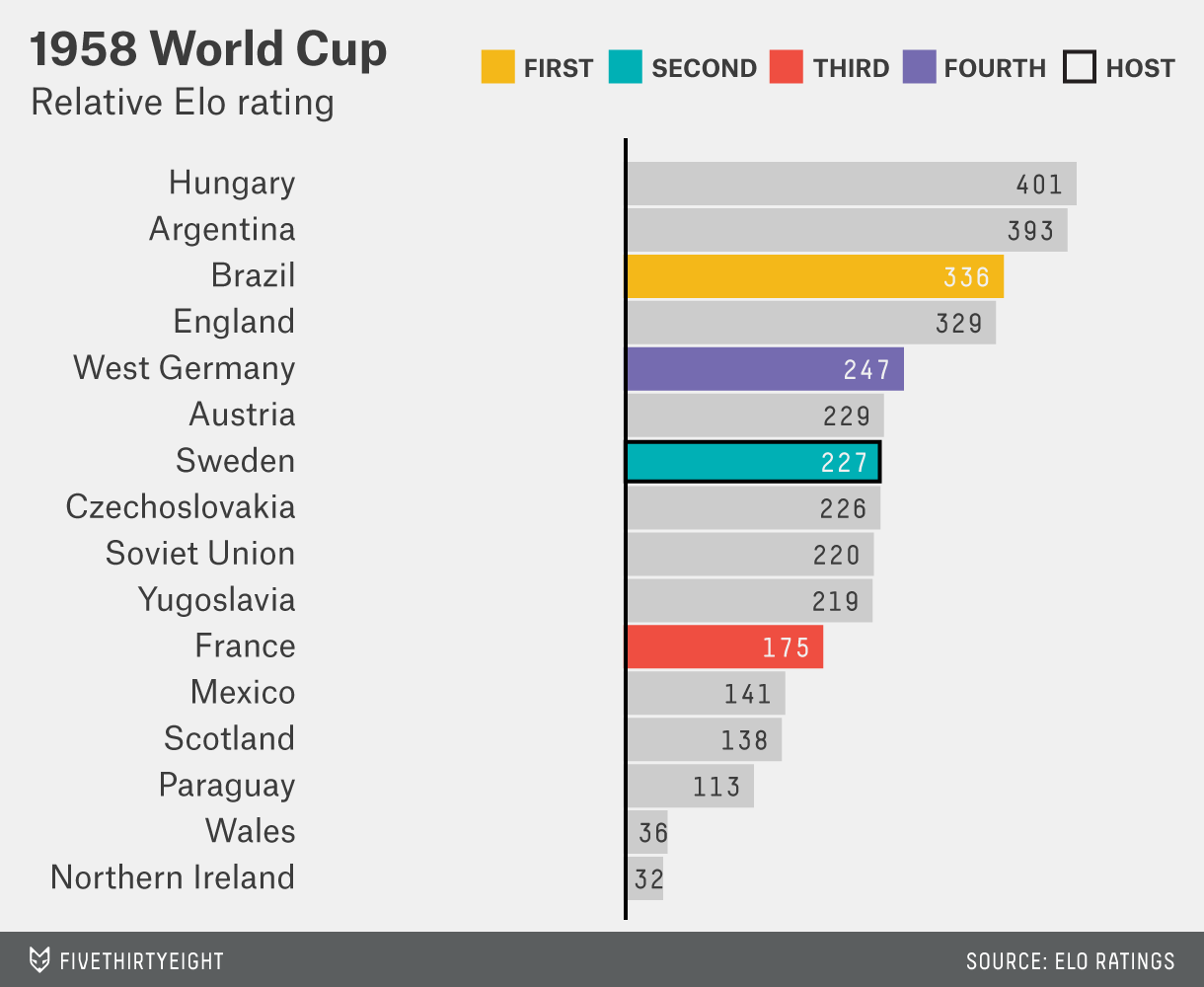 This touched off Brazil’s golden era, helmed by its star Pelé. The team entered the 1962 World Cup in Chile as the favorite, and it won — marking the last time a team has won two consecutive World Cups. 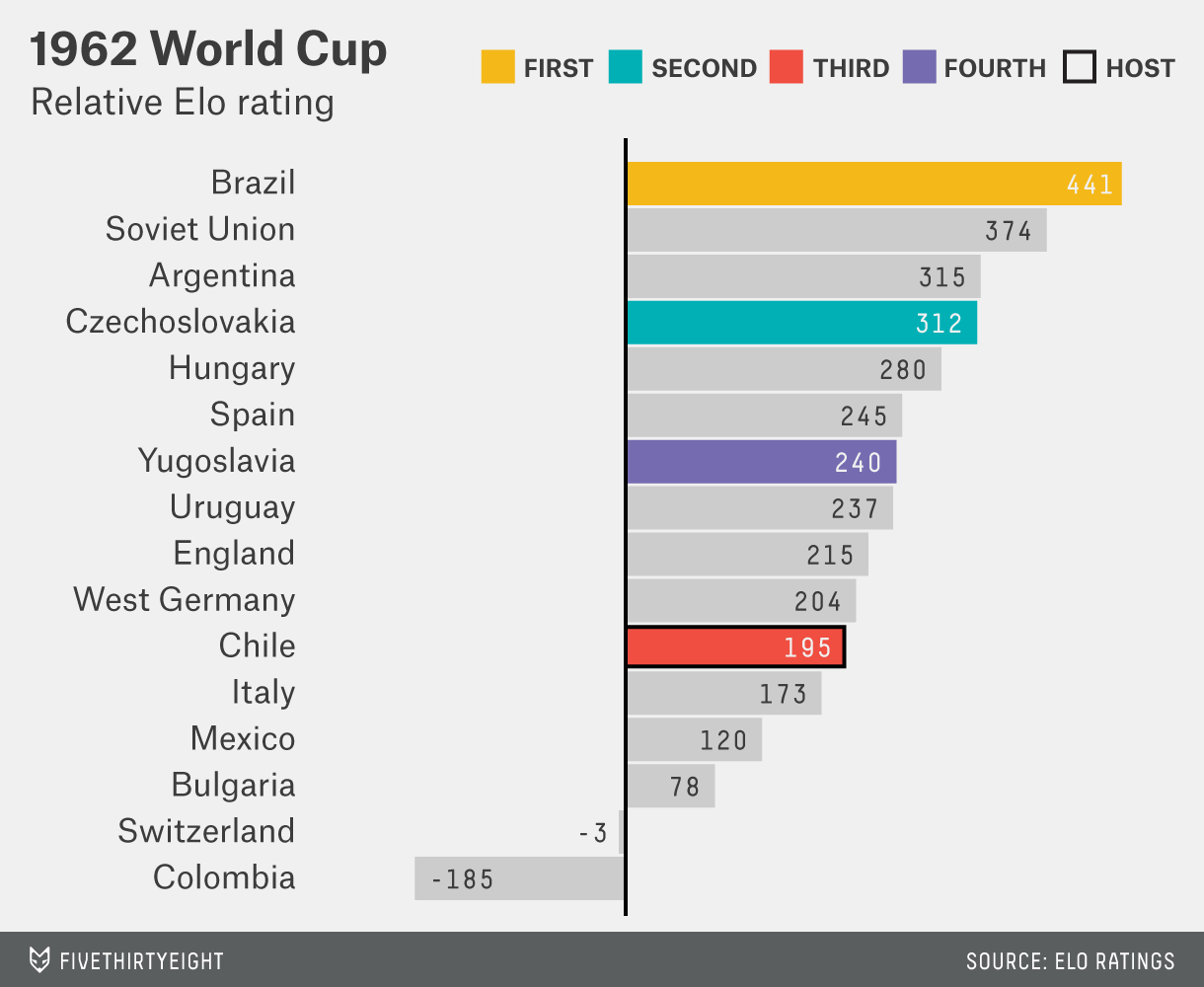 By 1966, Brazil’s Elo rating had slipped closer to the rest of the world. Among a deep group of contenders, England would have been the Elo favorite because of its host-nation status. And just this once, England won. 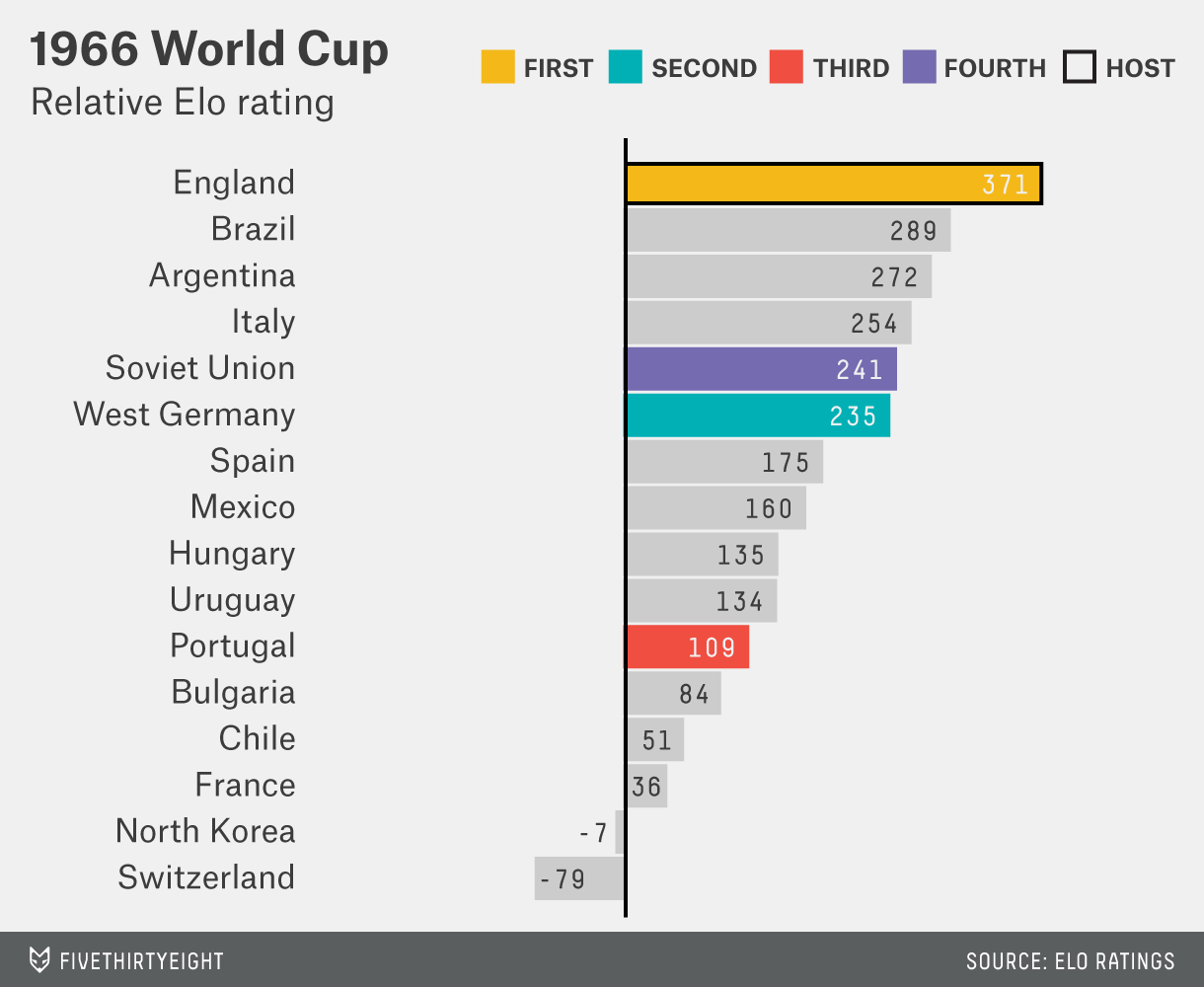 The 1970 World Cup, held in Mexico, featured one of the deepest fields ever. England was nominally the favorite again, according to Elo, but five other countries were within 100 points of it — including the eventual winner, Brazil. 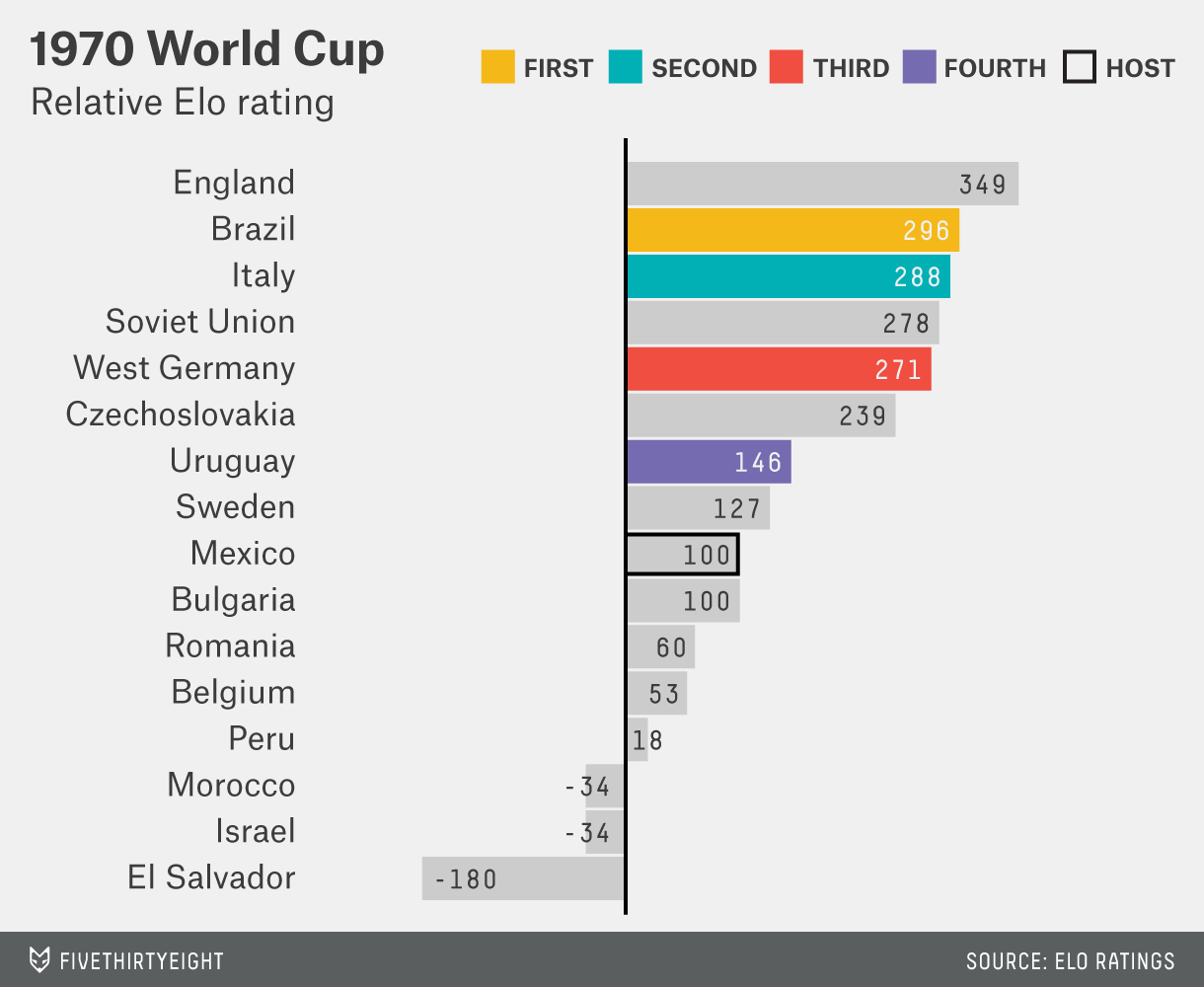 The 1974 World Cup, by contrast, had a relatively clear favorite. West Germany and Brazil were the best teams in the world by some margin, but West Germany, led by Franz Beckenbauer and having built momentum by winning the 1972 European Championships, played host to the tournament and won. 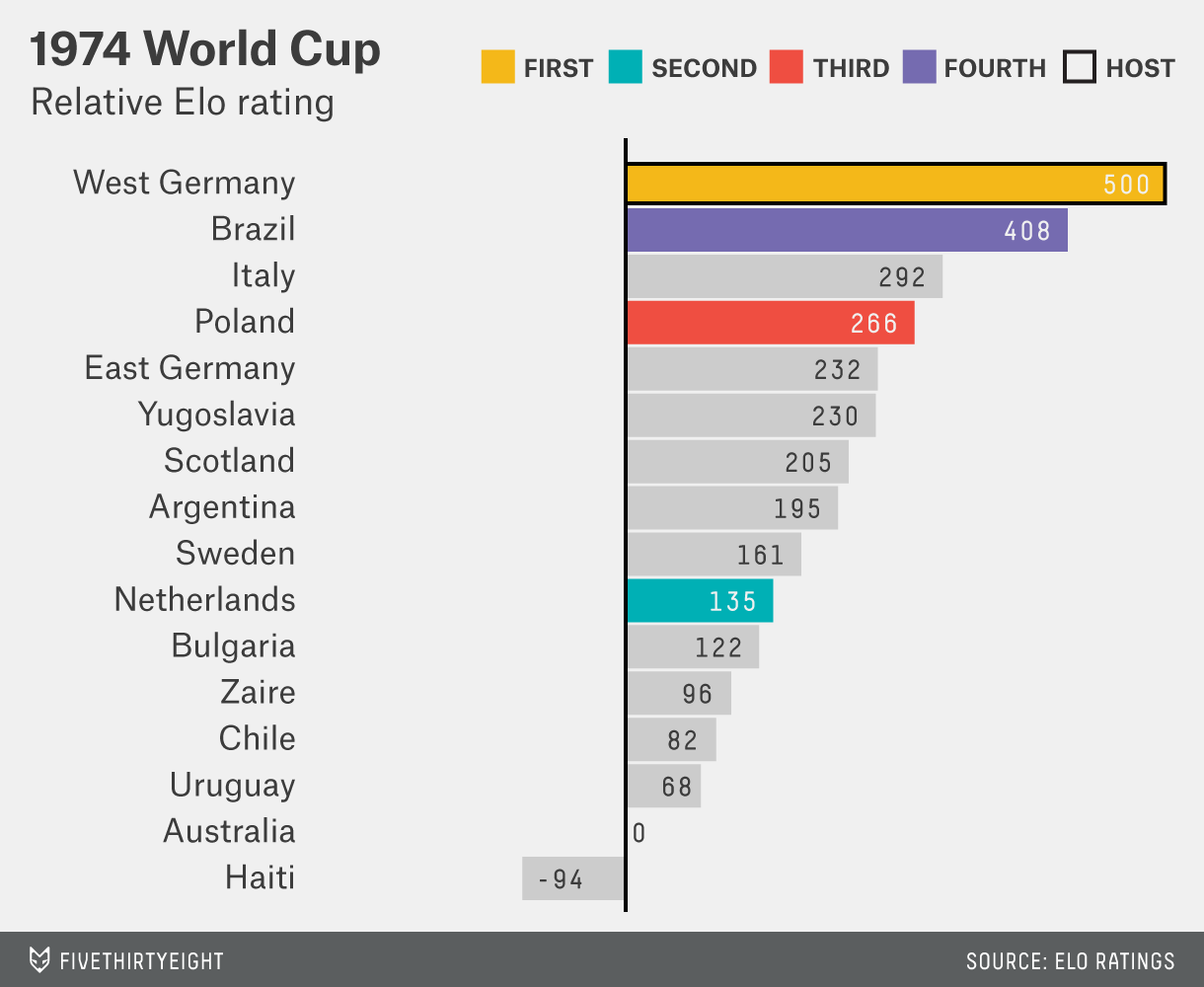 The 1978 World Cup, held in and won by Argentina, is one of the least fondly remembered. Argentina was ruled by a military junta, which had come to power in 1976 after the overthrow of Isabel Perón. That World Cup has also long been associated with accusations of match-fixing. Was Argentina’s home-country advantage, for whatever reason, larger than usual? It’s hard to say; Argentina was a good team on its football merits, and the customary 100-point home-country boost would have put it in a group of front-runners that included West Germany, the Netherlands and Brazil. 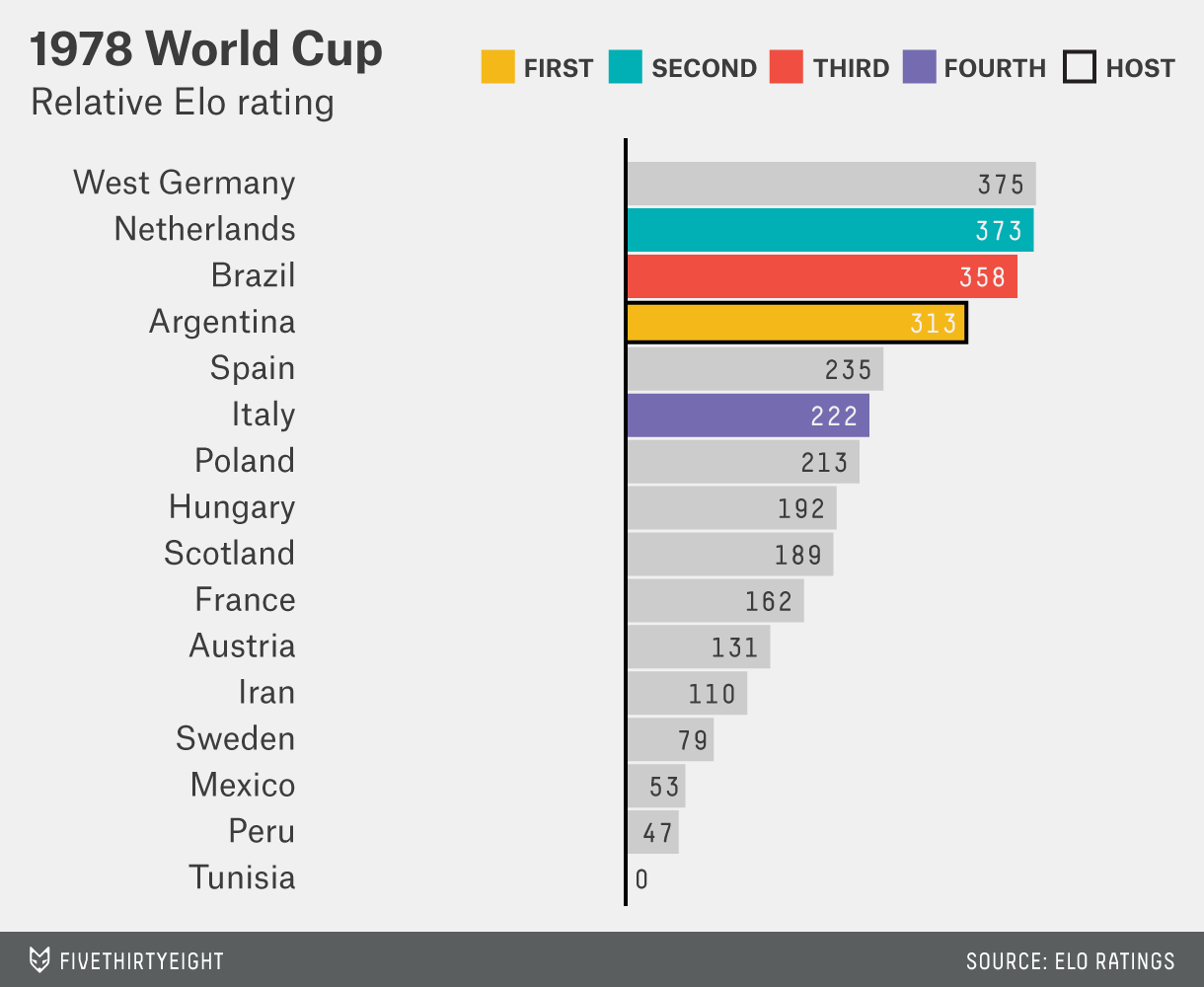 Spain hosted the World Cup in 1982; West Germany and Brazil would have been the favorites, according to Elo. Instead, it was Italy — just the 12th-best team in the field — that won. 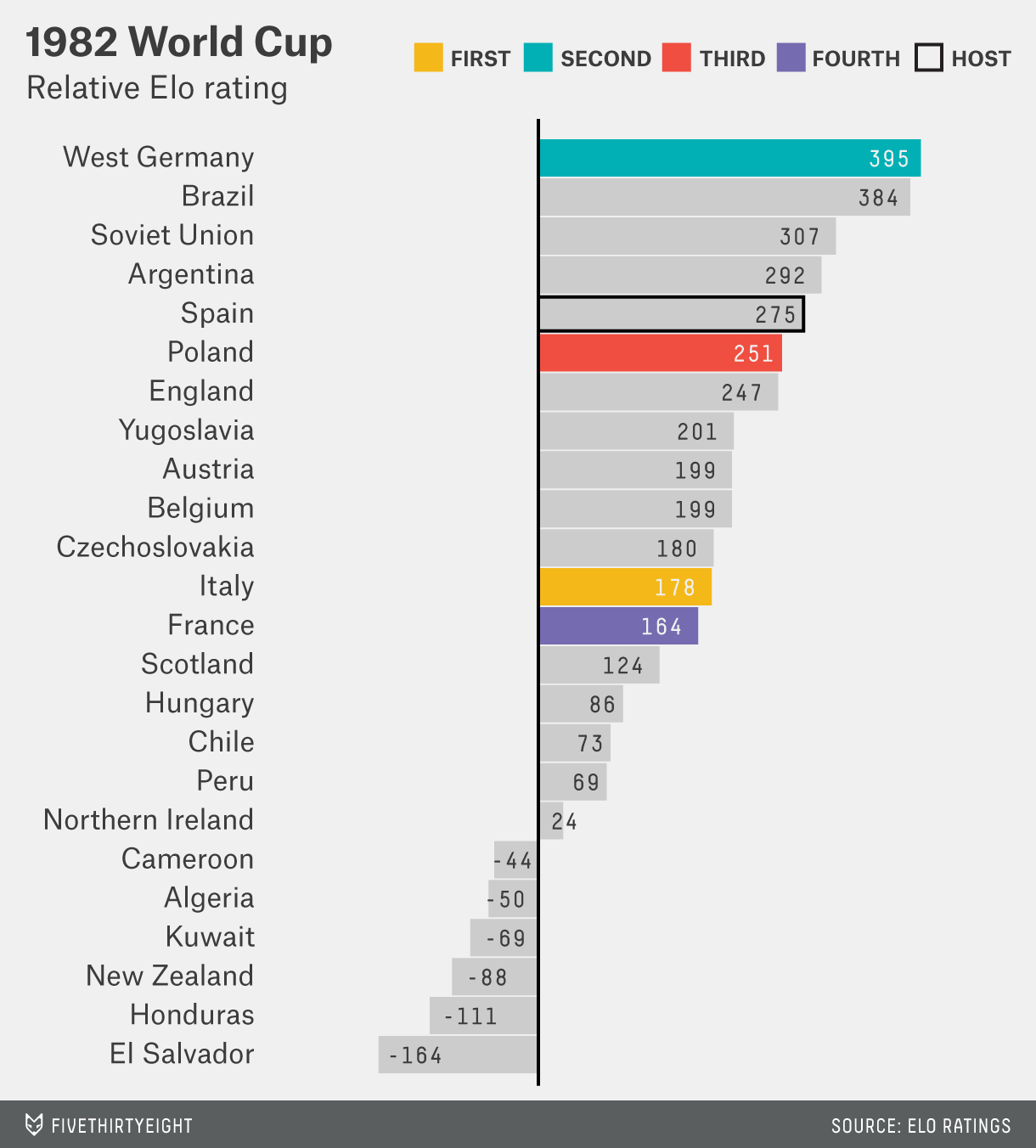 The 1986 World Cup initiated an era of relative parity. It would have been hard to pick a favorite: 14 teams, including the host, Mexico, were stacked within 140 Elo points of one another, and they weren’t that far ahead of some of the also-rans. Argentina won, not uncontroversially, on Diego Maradona’s “Hand of God” goal. 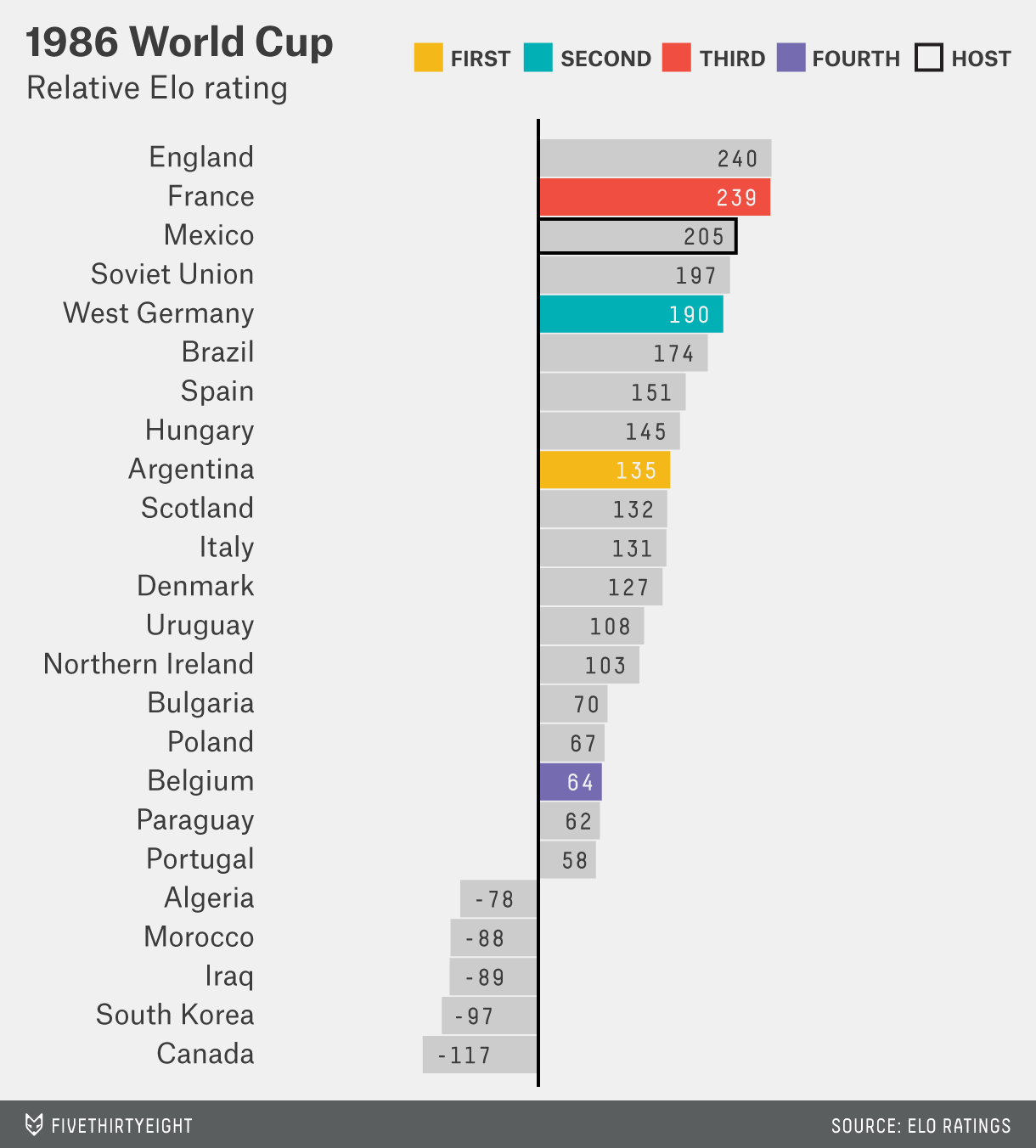 The 1990 World Cup also featured a fairly flat distribution of talent, although the host, Italy, would have been the nominal favorite on the basis of the home-country advantage. West Germany won instead after a low-scoring and poorly played World Cup. 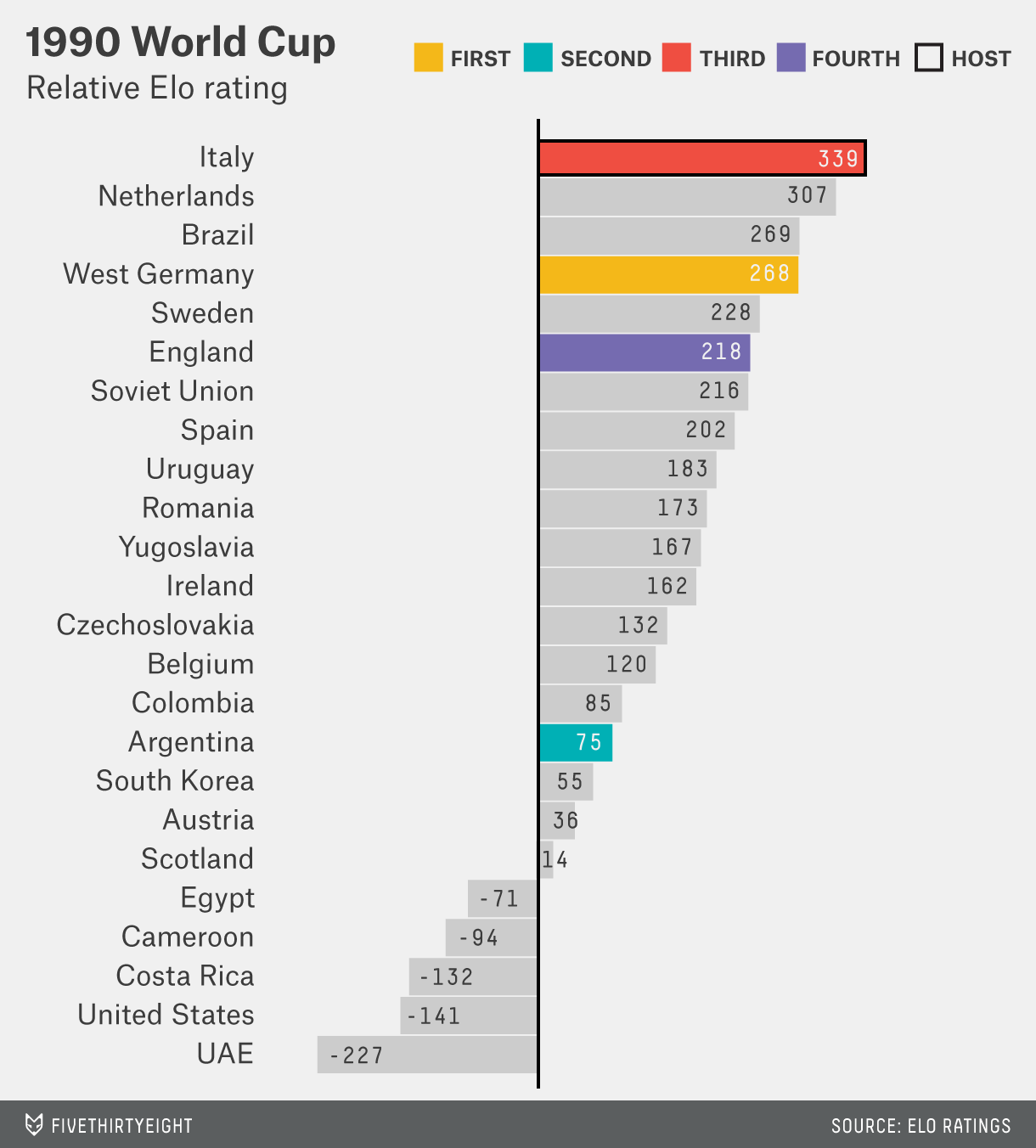 The World Cup returned to the Americas in 1994, when it was held in the United States. This was perhaps the first time that the host nation had no real chance of winning; the U.S. was rated as just the 18th-best team, despite its home-country boost. Much like the 1986 tournament, there was a large group of good-but-not-great teams atop the field. The Brazilian team, led by Romário and Bebeto, won in Pasadena, California, after Roberto Baggio’s penalty kick sailed over the crossbar. 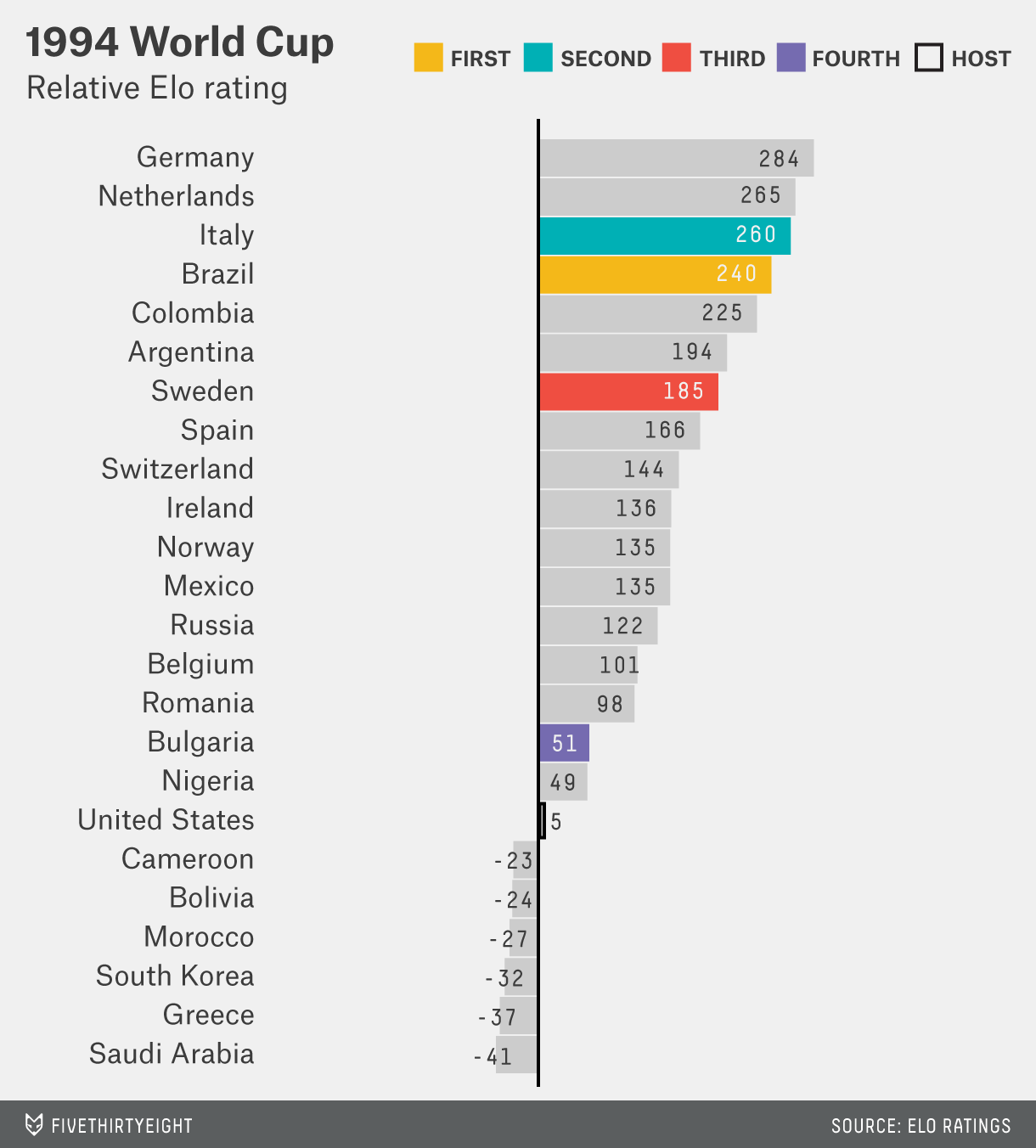 The 1998 World Cup featured co-favorites, according to Elo: France and Brazil were tied in Elo entering the tournament (after giving France its 100-point home-country bonus). Those two teams met in the final, and France won 3-0. 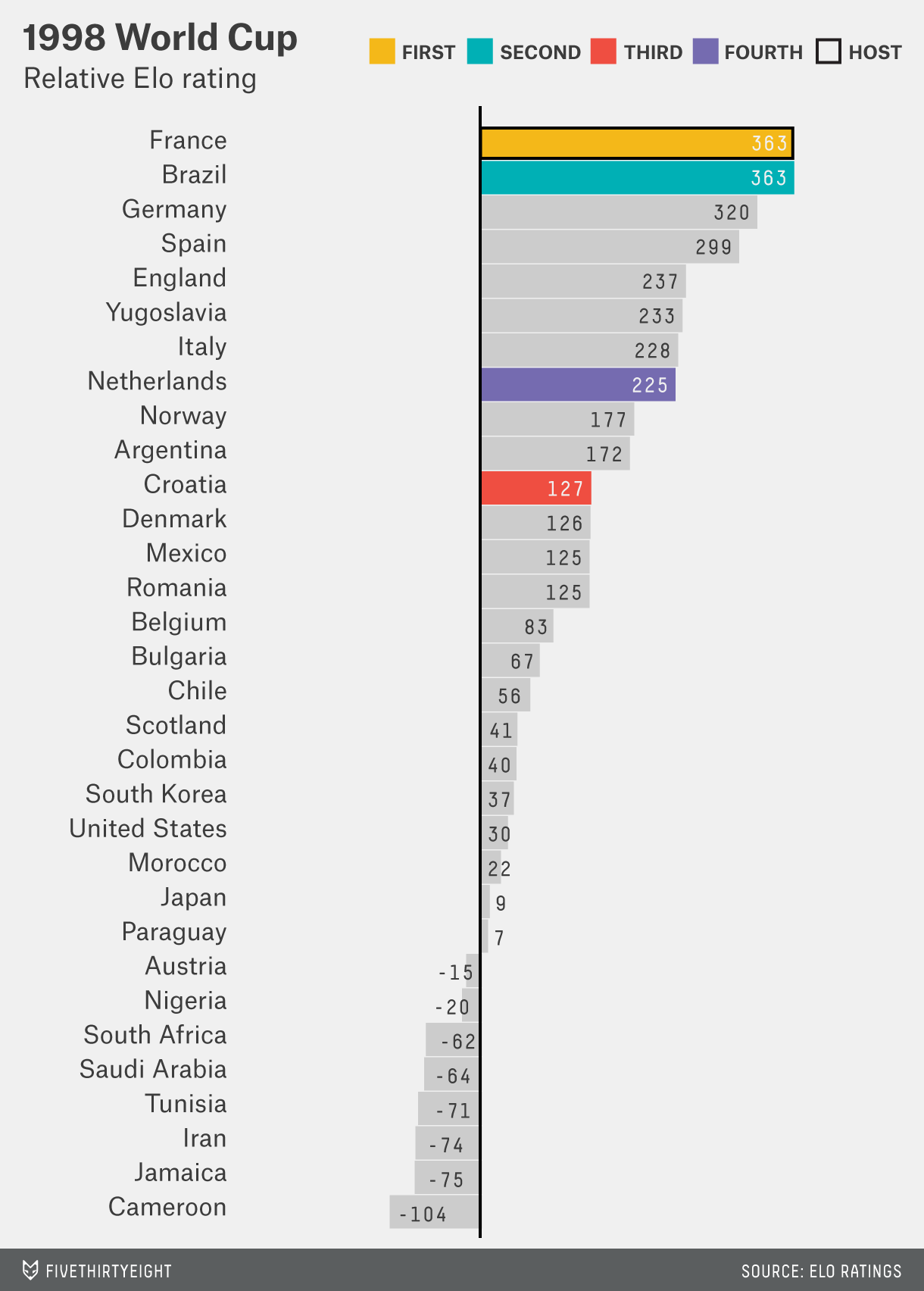 The 2002 World Cup, co-hosted by Japan and South Korea, was one of the oddest tournaments. France was the best team entering the tournament, according to Elo, but it went winless in the group stage. The final featured some customary names — Brazil and Germany, with Brazil winning — but neither the Brazilian or German teams were especially strong by the Elo ratings. Turkey took third place despite being just the 23rd-best team in the field. 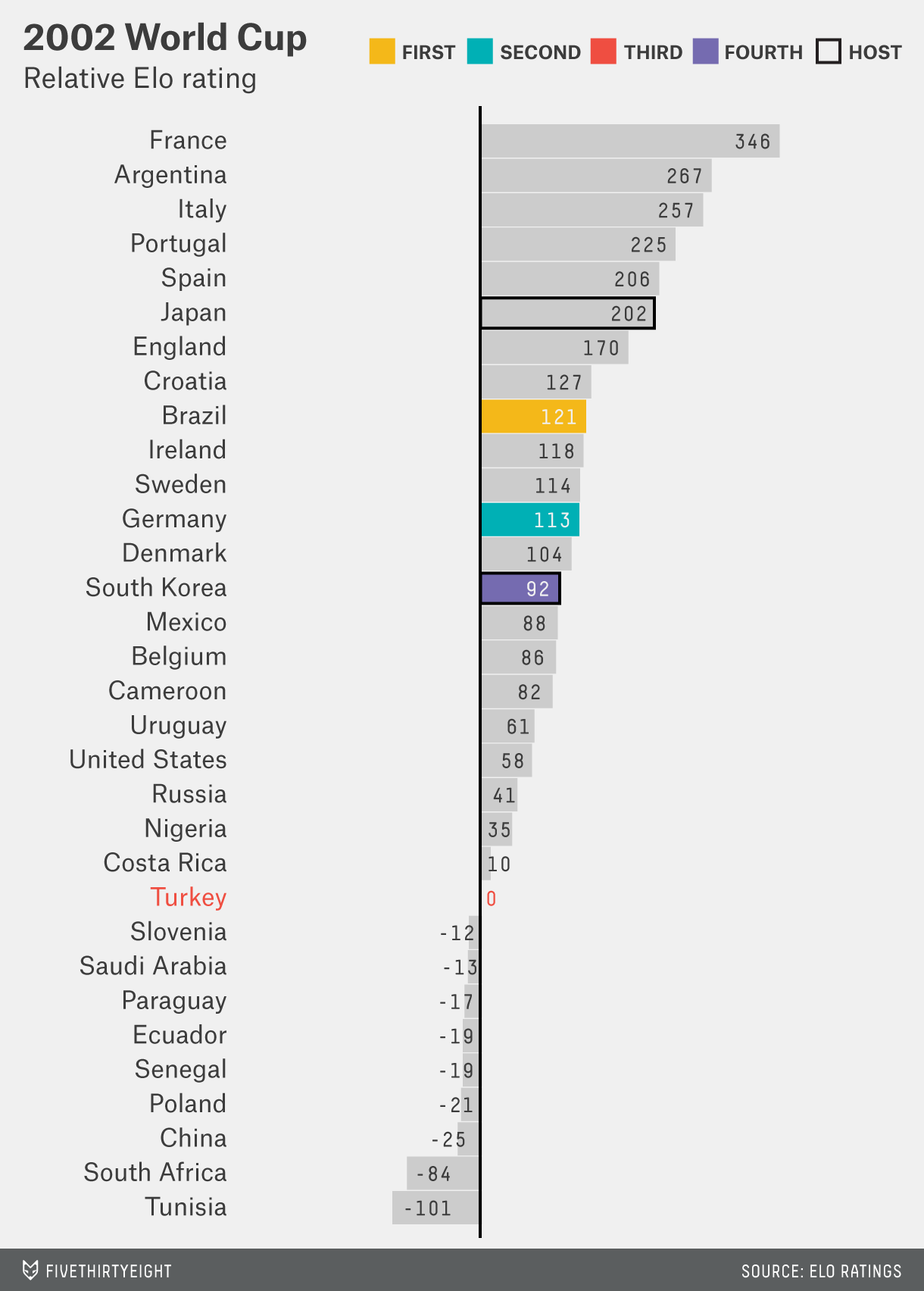 The 2006 World Cup also featured a great deal of parity, with at least 10 plausible winners, including the host, Germany. It was Italy who prevailed over France on penalties in a final remembered for Zinedine Zidane’s headbutt. 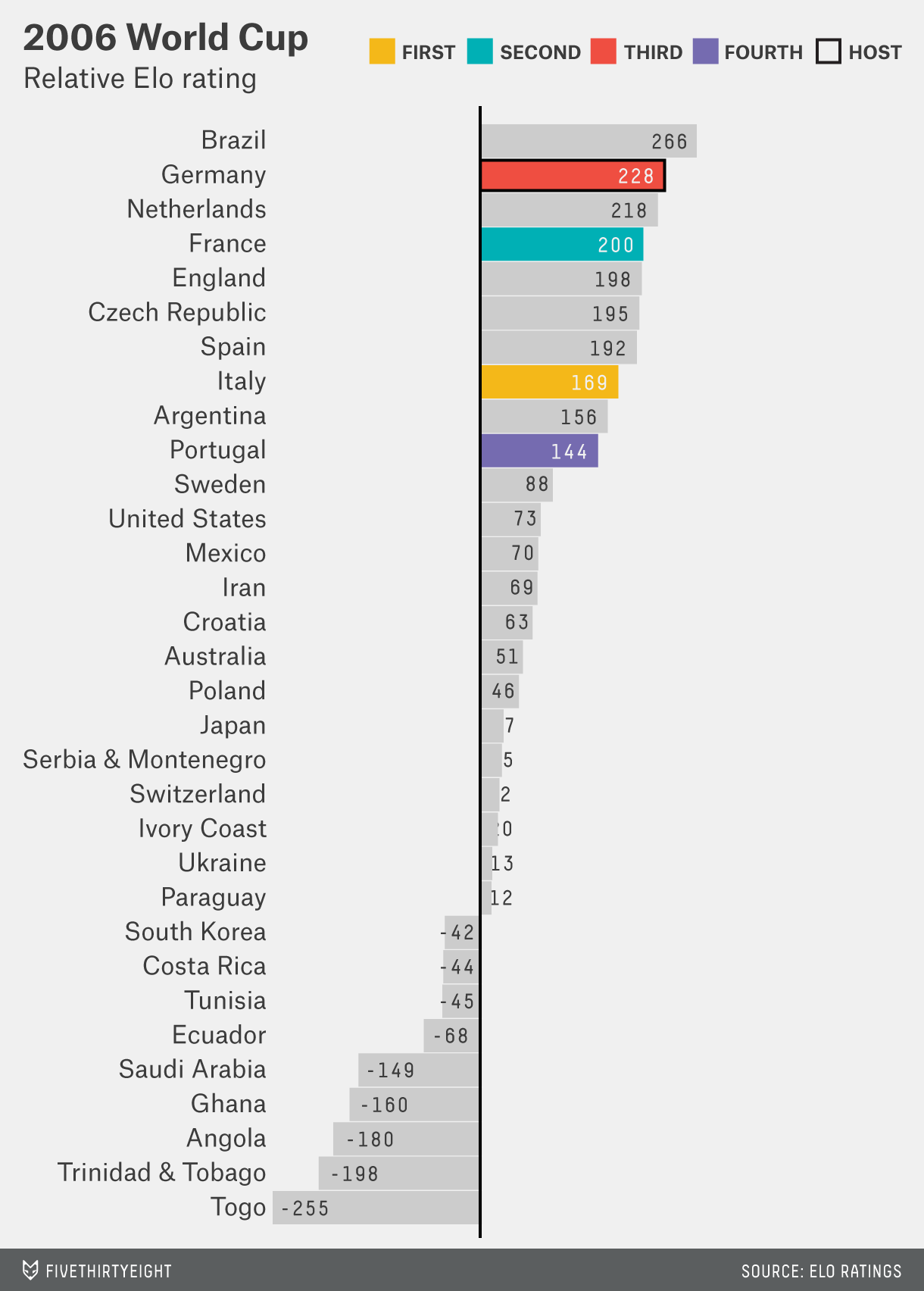 The past two World Cups, however, have seen a reversal in the trend of greater equality among footballing nations. Brazil and Spain entered the 2010 World Cup in South Africa as the front-runners, with Brazil just two points ahead of Spain in Elo entering the tournament. In the final, Spain defeated the Netherlands, ranked third in the world per Elo. 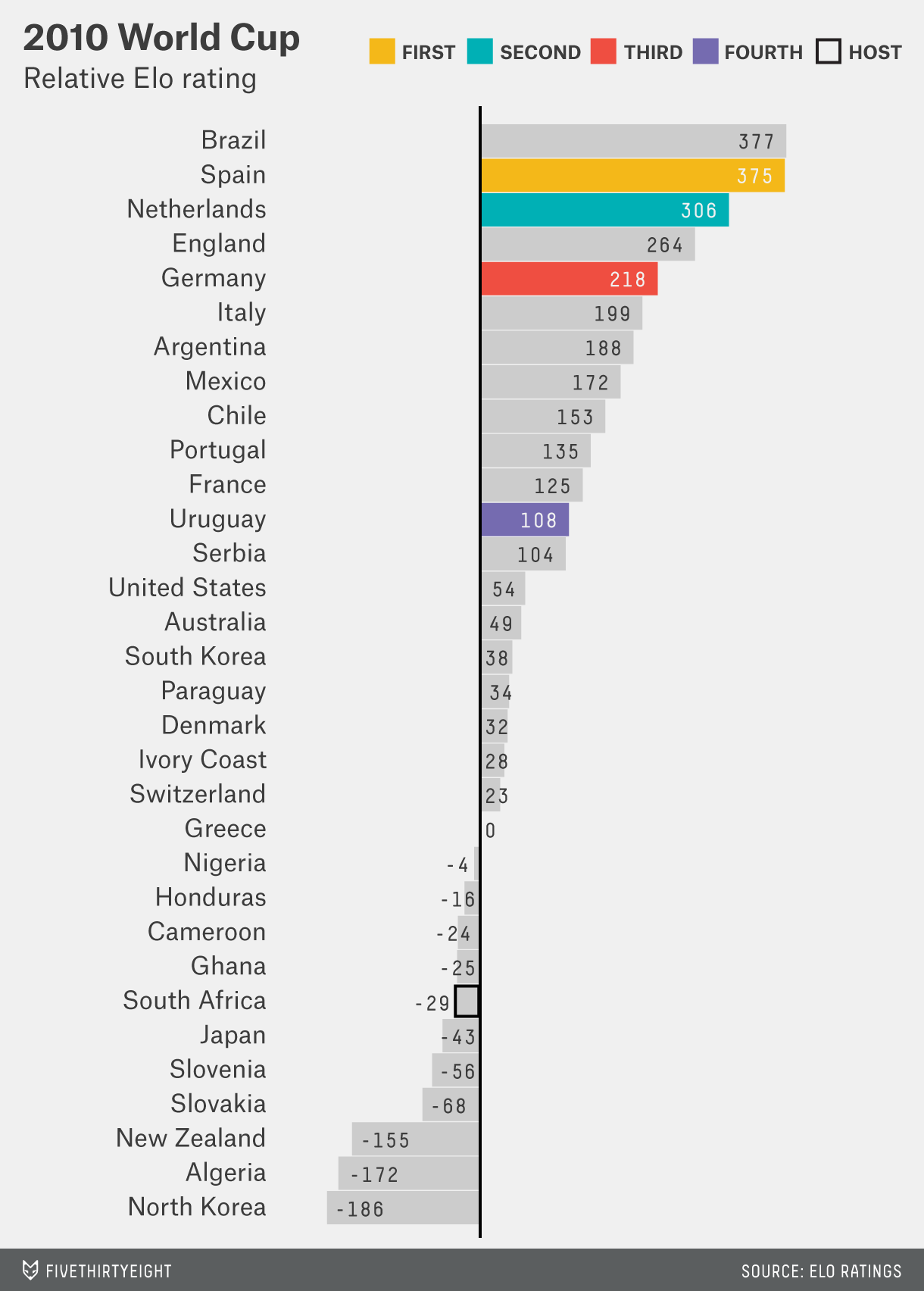 That brings us back, finally, to this year’s tournament. Here are the Elo ratings, and then a few closing observations. 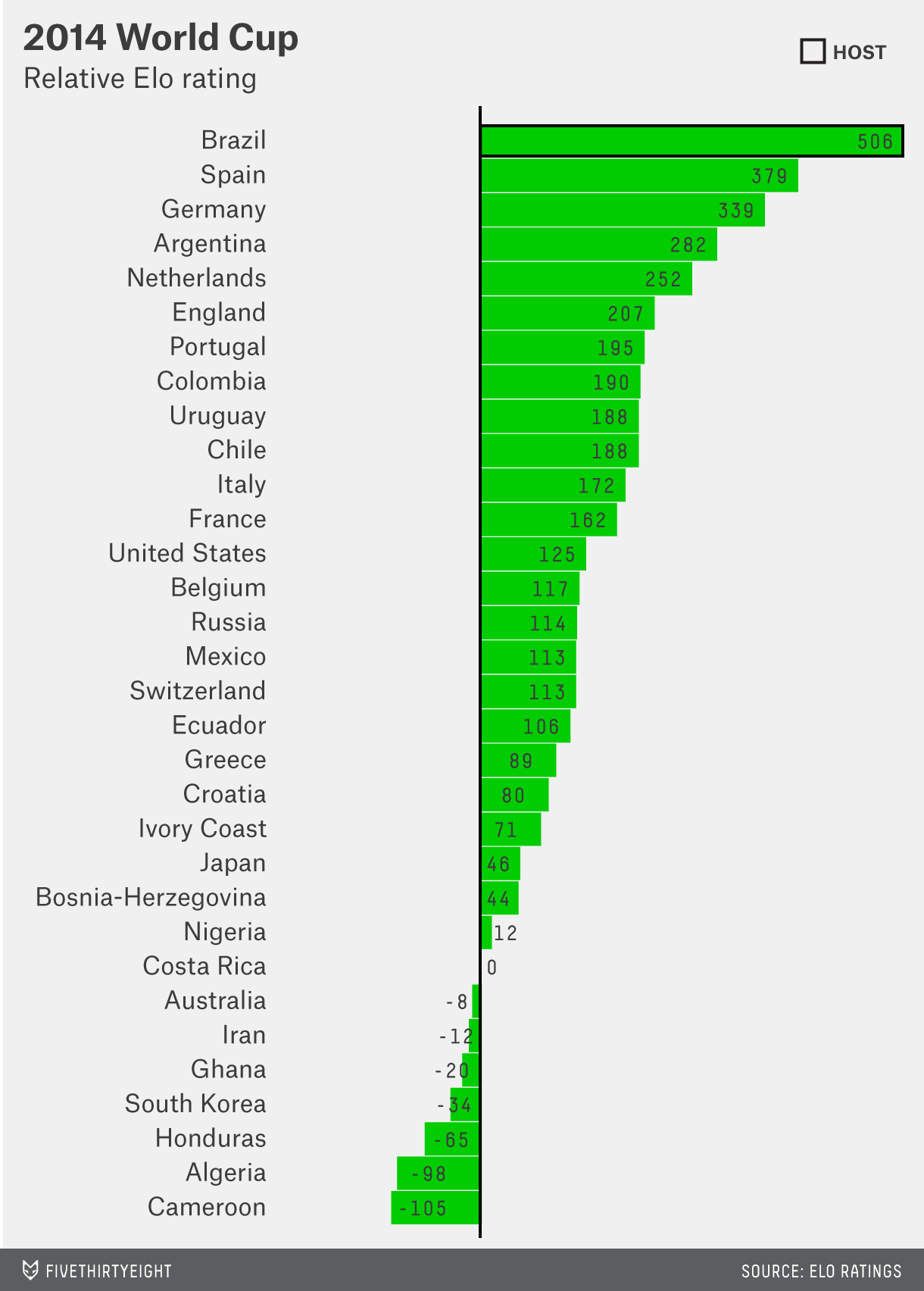 Brazil is the best team in the world, according to Elo, as it is in our Soccer Power Index. There have been several other times when a home country was close enough to the top in Elo that it would have been the favorite after accounting for its home-country bonus. However, this is the first time the No. 1-ranked Elo team also played host.

That’s not to say Spain, Argentina and Germany are poor teams. Spain’s Elo rating — 379 points ahead of the No. 32 team — would have made it the favorite in any World Cup played from 1986 through 2010. Argentina and Germany are strong enough that they would have been the favorites in a number of recent World Cups as well. Any of them would be a worthy champion, but they’ll have to get by Brazil.