Early polls have historically done fairly well in predicting the the outcome of governors’ races. We can add bells and whistles to improve the forecast — and we will — but the polls are a good start and a good baseline.

So, let’s check out what the early gubernatorial polls say (I did a similar exercise with the Senate this week). The model I’m using to turn current polling into win probabilities is basically the one I presented in late May, except that I don’t control for the fact that the president’s party typically underperforms in midterm elections; we’re just using polls. The probabilities are derived from polling errors in gubernatorial elections from 2006 to 2013. I take a simple average of polls conducted from January to June by each pollster in each state, and then average each pollsters’ polls so that each pollster only counts once in the overall average. (I average the contenders in races where it is unclear who will be the nominee.) 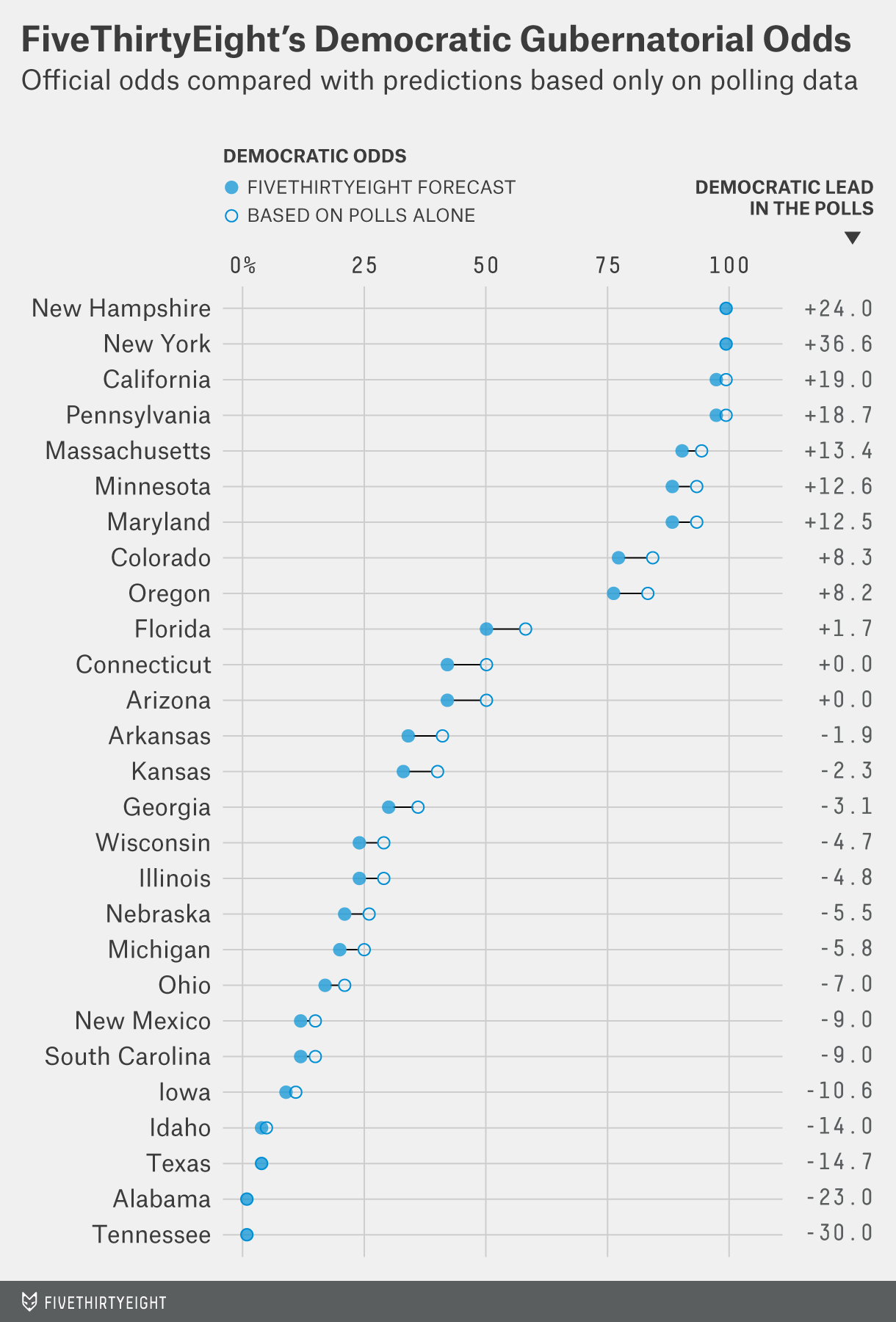 But Democrats have a 20 to 40 percent chance of winning seven races. Republicans have only two races that meet this criteria. This suggests that Democrats have the bigger upside. If a minor Democratic wave develops — let’s call it a ripple — Democrats could win in states including Michigan, Nebraska (though there haven’t been many polls in the Cornhusker State), Ohio and Wisconsin. Some surveys have found tight races in those states, though the majority of polls say Republicans are favored.

The states most likely to see a change in party are pretty much the same as in May.

Illinois’s Democratic governor, Pat Quinn, continues to pay for his state’s budget troubles and trails Republican Bruce Rauner. His best chance to win is for a 2010-like polling error to occur. Given that there is a scarcity of polls not conducted by We Ask America, which has historically overestimated Republican support, Quinn is probably not done yet.

The same probably cannot be said for Pennsylvania’s Republican governor, Tom Corbett. Still dealing with the fallout from the Penn State sex-abuse scandal (among other problems), Corbett is down nearly 20 percentage points to his Democratic opponent, Tom Wolf. To come back from this deficit, Corbett probably needs Wolf to say something outlandish.

Looking at only the polls, Republican Asa Hutchinson continues to be a slight favorite against Democrat Mike Ross in the Arkansas race to succeed Democratic Gov. Mike Beebe. This result isn’t too surprising given that Arkansas has quickly trended away from the Democratic Party. The surprise here is that Hutchinson is ahead while fellow Republican Tom Cotton is slightly behind in Arkansas’s Senate race.

Beyond Arkansas, Illinois and Pennsylvania, no other state for which we have at least one poll is likely to see control of the governor’s mansion change parties come January, but three other states are tossups.

Four candidates could conceivably win the Republican nomination in Arizona. The polling is limited, but an average of the polling of the Republicans (Ken Bennett, Doug Ducey, Christine Jones and Scott Smith) against Democrat Fred DuVal gives neither side an edge. Keep in mind, Democrats hold an edge in Arizona’s congressional delegation, so a Democratic win isn’t inconceivable. (Controlling for the president’s party puts Republicans in a slightly better position, but the state would still be very much in play.)

There haven’t been any new polls in Connecticut since our previous look; Democratic Gov. Dannell Malloy and Republican Tom Foley, in a replay of their 2010 face-off, are close to even.

In Florida, Democrat Charlie Crist is a slight favorite over Republican Gov. Rick Scott. That’s not too surprising given that we’re looking at surveys from January to June. Most of the pollsters most favorable to Crist (such as Quinnipiac) haven’t polled the race in a couple of months. Scott has been hammering Crist on TV, and that has helped to slowly close the gap. And Crist’s tenuous lead is eliminated completely if we control for the fact that he’s a member of the president’s party.

There are two other races to keep an eye on: Georgia and Kansas. Both states consistently vote Republican in presidential elections, but circumstances this year appear to be giving Democrats a chance in the fall.

Georgia’s Republican governor, Nathan Deal, has had problems since a botched handling of a snowstorm this year. Add a potential ethics problem, and Democrat Jason Carter has an opening; he has outraised Deal in the latest fundraising reports. Deal is still favored, but Carter has no worse than a 30 percent chance of winning.

Kansas’s Republican governor, Sam Brownback, has seen a familiar fissure in the state’s Republican Party come back to bite him. Democrat Paul Davis has recently been endorsed by more than 100 moderate Republican officeholders in Kansas, and budget problems have plagued the governor. The polls give Brownback only a 60 percent chance of being re-elected — not exactly a comfortable position for a Republican governor in a ruby-red state.

You might be wondering why Hawaii, Maine and South Dakota aren’t on our list. These races feature third-party candidates who are polling above 10 percent. As I have previously pointed out, these contests are extremely volatile; the margin of error is double that of races with no viable third-party candidate. While Republican Gov. Dennis Daugaard’s lead in South Dakota is likely large enough to overcome any surprising third-party surge, Hawaii and Maine’s races are too close to make a relatively accurate prediction.

All in all, Republicans should hold onto their majority in gubernatorial seats. They have 29 and are unlikely to lose more than three seats. But if Democrats win every race in which they currently have at least a 20 percent chance — again, that’s unlikely to happen — they’d pick up nine governorships. If the GOP prevailed in every race in which it has at least a 20 percent chance, it’d pick up three.