We continue our Presidential Geography series, a one-by-one examination of the peculiarities that drive the politics in all 50 states and the District of Columbia. Here is a look at Arkansas, The Land of Opportunity. FiveThirtyEight spoke with Dr. Janine Parry, a professor of political science at the University of Arkansas and the director of the Arkansas Poll; and Dr. Jay Barth, chair of the department of politics and international relations at Hendrix College in Conway, Ark.

The high point of last week’s Democratic National Convention was, by most accounts, the energetic address given by Bill Clinton, the former two-term president and governor of Arkansas. Mr. Clinton can still deliver a rousing speech, but the electoral landscape has changed considerably since he was last on the ballot, perhaps nowhere more so than in his home state. 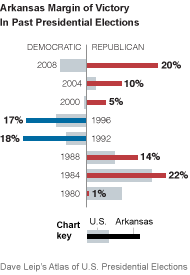 In the 12 years since Mr. Clinton’s run for re-election in 1996 to President Obama’s run for office in 2008, Arkansas has experienced the largest drop in Democratic support — a whopping 37 percentage points. Part of that is explained by Arkansas being Mr. Clinton’s home state. Race may have also played a role, and perhaps some of the decline stems from hometown unhappiness that Mr. Obama had ousted the former first lady of Arkansas, Hillary Rodham Clinton, in the Democratic primaries.

But much of Arkansas’s change of heart is explained by the same trend evident in other Southern states: the exodus of Southern whites from the Democratic Party, particularly working-class whites in rural areas.

This exodus has been extensive in Arkansas, one of the most rural, most religious, least-educated and poorest states in the nation.

But there is a catch: Democratic losses have so far mostly been limited to presidential elections. While other Southern states have gone from Democratic to Republican control, Arkansas remains one of the few states — West Virginia is another — where voters still split tickets. And Democrats still control the governor’s mansion, the State Senate and the state House of Representatives.

For years, analysts have predicted that the state’s Republican-preferences at the presidential level would trickle into state-level races. But Arkansas is a small state where years of one-party rule trained people to focus on personality, Mr. Barth said. And personality has helped the Democrats keep the Republican tide from rolling in.

A series of immensely popular Democratic politicians — Mr. Clinton, Dale Bumpers and David Pryor — helped to delay a Republican takeover of the state, both Ms. Parry and Mr. Barth said.

But it may finally be getting less palatable to many Arkansas voters. The Republicans made significant gains in 2010, cutting the Democratic advantage in the Senate from 19 seats to 5, and in the House, from 44 seats to 11. 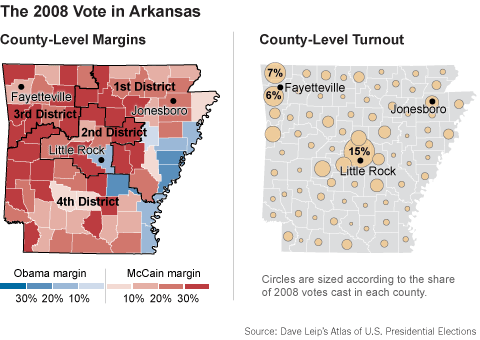 Arkansas’s political geography is hard to sort out because voter preferences are so dependent on the particular contest. For example, Senator John McCain, the Republican nominee in 2008, won 66 of Arkansas’s 75 counties in the presidential election. But the same year, the Senator Mark Pryor, an Arkansas Democrat, won all 75 counties in his re-election bid. In 2010, Republicans made gains nationally and in Arkansas where Senator Blanche Lincoln, a Democrat, was beaten handily in her bid for re-election, but Mike Beebe, Arkansas’s Democratic governor, swept every county in the state.

In presidential elections, most Democratic voters in Arkansas are found in Little Rock. The state capital is more than 40 percent African-American and is home to well-off, well-educated white voters, Ms. Parry said. The other consistent source of Democratic presidential votes is the Arkansas Delta, a string of rural, predominately African-American counties in the east running along the Mississippi River. These counties, however, have been losing population.

Northwest Arkansas (excluding the liberal university town of Fayetteville) is the most heavily Republican region in the state. The northwest — particularly Benton and Washington counties — has emerged to rival the Little Rock area as the economic engine of the state. Giant companies like Walmart, Tyson Foods and J.B. Hunt are headquartered in the area and have helped fuel the northwest’s booming economy. 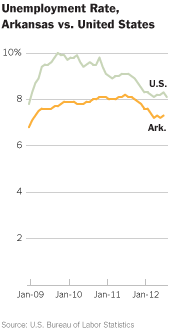 Those jobs have attracted business-oriented, anti-tax conservatives, Mr. Barth said. Those newcomers, along with an influx of retirees, have joined social conservatives already in the area.

In addition to the northwest, the ring of suburbs around Little Rock — in Faulkner, White, Saline and Lonoke counties — is also overwhelmingly conservative. And both the suburbs in Central Arkansas along with Washington and Benton counties in the northwest have been fast-growing regions, pushing the state toward the Republican Party.

The rest of Arkansas is rural, overwhelmingly white and culturally conservative. But these counties are also relatively poor and “are more progressive on economic issues,” Mr. Barth said. Given the right candidate, they will still vote Democratic in state-level races.

Hot Springs in Garland Count
y, where Mr. Clinton grew up, has been a close barometer of the statewide vote in the last three presidential elections. Many of the state’s characteristics are evident in Garland County. It has a substantial African-American population, although not as high as Little Rock and the delta. And Hot Springs has attracted retirees, just like the northwest. Garland County is not a perfect microcosm of the state, Mr. Barth said, but it is close.

Mr. Romney is a 100 percent favorite in Arkansas, according to the current FiveThirtyEight forecast. And for the foreseeable future, Republican presidential candidates will likely be able to count on carrying the state.

The bigger question is how long Arkansas’s split personality — Republican for president, largely Democratic at the state-level — can hold. Mr. Beebe, a Democrat, is still popular in the state, but “the conventional wisdom in Arkansas is that there aren’t that many Beebe’s left,” Ms. Parry said.

“The tide is clearly in one direction,” Mr. Barth added.

There may still be enough residual affinity for the Democratic Party in Arkansas that if the right presidential candidate came along at the right time, the state could be in play (in 2008, Mrs. Clinton was polling ahead of Mr. McCain in Arkansas).

But in the near future, Mr. Barth said, Arkansas may have moved beyond the reach of any Democrat — even a Clinton.