Major elections in the United States are almost always two-party affairs. Yes, third-party candidates run, but they’re rarely competitive, and they almost never win. Still, there are exceptions, and the 2014 New York governor’s race may be one of them.

The progressive Working Families Party perceives Democratic Gov. Andrew Cuomo to be too centrist, and it will decide this weekend whether to field its own candidate instead of cross-endorsing Cuomo. (New York allows candidates to appear on multiple ballot lines.) An opponent from his left could put Cuomo’s re-election bid in at least some danger.

An average of early polls by Quinnipiac University and Siena College shows the governor garnering 38 percent support, Republican Rob Astorino 24 percent and an unnamed Working Families Party candidate 23 percent. That’s down from Cuomo’s average lead of about 30 percentage points over Astorino in a two-way affair. 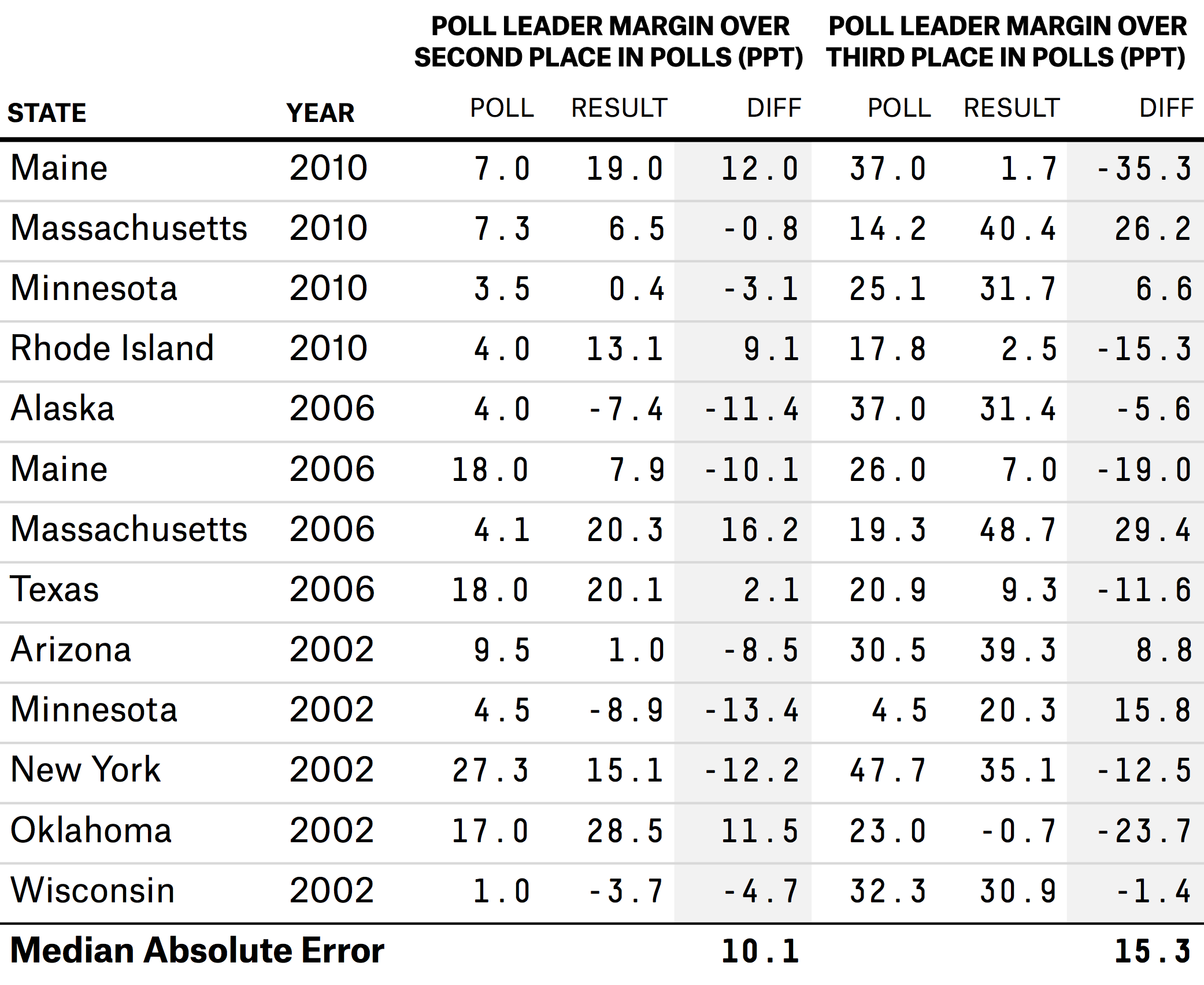 The median absolute error in these races between first and second place was a little over 10 percentage points. That’s not too far from the 14-point lead Cuomo currently holds over Astorino. In eight of these races, the second-place candidate gained; five times he or she lost ground. That suggests that Cuomo could blow Astorino out of the water, or the race could end up very tight. In the 2002 Minnesota three-way bonanza, for example, Republican Tim Pawlenty overcame an early deficit to beat Democrat Roger Moe and Independence Party candidate Tim Penny. In the 2006 Massachusetts gubernatorial election, on the other hand, Democrat Deval Patrick led early and ended up running away from Republican Kerry Healey with independent Christy Mihos in the race.

Overall, races with a strong third-party candidate have broken both for and against the frontrunner, and the polling errors have been pretty wide.

The candidate considered the most likely to be nominated by the Working Families Party, Zephyr Teachout, a law professor at Fordham University, may poll significantly weaker than the generic Working Families Party candidate. If, however, she polls anywhere close to 23 percent, then Cuomo’s lead might not be as secure as it seems.

A look at the crosstabs of the polling in New York gives you an idea of why three-way matchups are more susceptible to error. In a three-way election, the political identification cues many voters use to make their choices are thrown for a loop. Here’s the average of an April Siena poll and a May Quinnipiac poll:

Only a little more than half of self-identified Democrats are behind Cuomo, only 60 percent of Republicans are backing Astorino, and independents are splitting their vote nearly evenly between the three possible candidates. If it becomes clear that all three candidates are viable, then there could be a lot of moving around. Or — if the Working Families Party candidate is a bust — Cuomo may consolidate his support among Democrats.

This is New York, of course, where Democrats usually win. Third party or no, Cuomo is the favorite. But if the Working Families Party does put forward a strong candidate, the race will become much more unpredictable.