Can you predict Senate elections more accurately than a basic polling average? It’s something we at FiveThirtyEight try to do. For our official Senate forecast, we’ll include adjustments for fundraising, candidate quality, pollster bias (statistical bias, that is), the historical political leanings of each state, etc.

But the basic polling average still does pretty well. So before we launch our official projections, let’s take a look at what the latest polling shows and how that compares with FiveThirtyEight’s informal Senate forecast.

We’ll look at Senate races with at least one poll from the first six months of this year — only races without a major third-party contender. I took a simple average of polls, one from each pollster. For pollsters that published more than one poll in a state, I took average of their polls, then treated that as a single poll in the overall average. In races where it’s relatively unclear who will be the general election candidate, I simply averaged the contenders. (This is basically an offshoot of the model I presented in April.)

Here’s how the polls-only forecast sees things compared to our most recent FiveThirtyEight projection (from June): 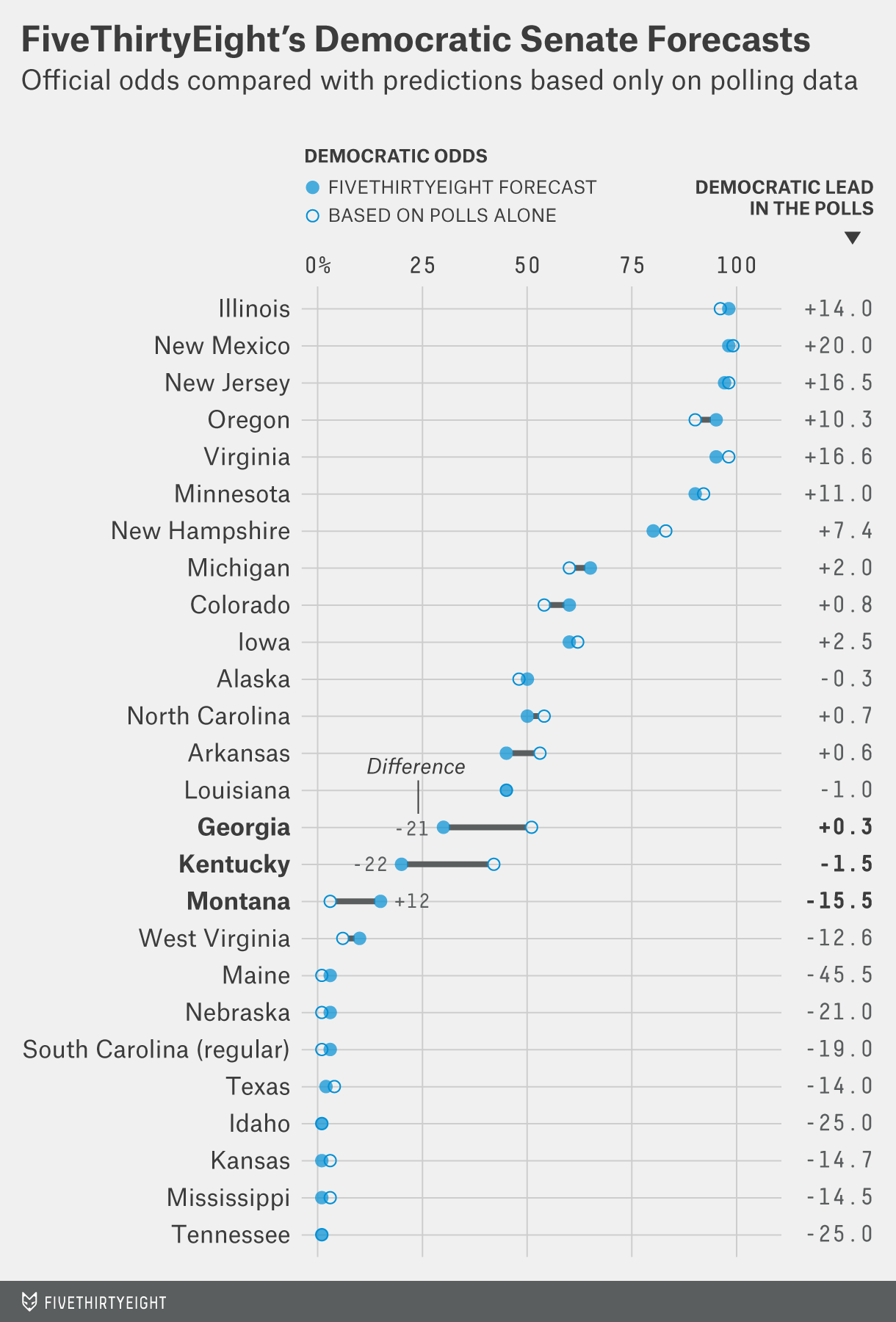 If Democrats win all the states in which the polls now favor them, the party would lose four seats (Alaska, Louisiana, Montana and West Virginia) and pick up Georgia. Add on a probable loss in the Senate race in South Dakota (which isn’t included here because it’s a three-way matchup), and Democrats will hold on to a 51-to-49 seat majority in the next Senate. Sum up the probabilities of each race, and Democrats end up with about 50 seats, on average, in the new Senate. That would be good enough for them to keep control of the chamber, with Vice President Joe Biden acting as a tiebreaker.

But notice that, according to the polls, there are a lot of tight races. Democrats have between a 42 and 62 percent chance of winning in nine races. At least per the polls, we can probably call Alaska, Arkansas, Colorado, Georgia, Kentucky, Iowa, Louisiana, Michigan and North Carolina all tossups. Note how, for the most part, the FiveThirtyEight forecast sticks relatively close to the polling average. There are three races for which the two disagree.

In Georgia, the FiveThirtyEight projection is far more pessimistic about Democratic prospects than the polls. Here’s why: No Democrat holds an elected statewide office in Georgia. No Democrat has won a U.S. Senate race in the state in 14 years. No Democrat has won a presidential race in the state in 22 years. The Democratic candidate, Michelle Nunn, is probably benefitting from name recognition; her father, Sam Nunn, was a well-regarded senator from the Peach State. That edge may disappear once voters realize Michelle is not Sam. Moreover, Republicans may coalesce around the winner of the contentious GOP primary between Jack Kingston and David Perdue.

Kentucky is a similar case — the polls show a Democrat holding her own a in a deeply red state. But Senate Minority Leader Mitch McConnell, a Republican, has all the fundamentals going for him: President Obama is deeply unpopular in Kentucky, McConnell is an incumbent, and Democrats haven’t won a statewide federal race in Kentucky in 18 years. They haven’t won a Senate race in 22 years. In May, I estimated that these factors knocked down Democrat Alison Lundergan Grimes’s chances of winning by nearly 30 percentage points, from the low 40s into the teens.

In Arkansas, there has been talk about how Republican Rep. Tom Cotton, as a candidate, hasn’t lived up to expectations. Still, Obama is also deeply unpopular in Arkansas, and there have been many Republican-sponsored polls in the past few months suggesting that Cotton is ahead by about 5 percentage points. Those polls are down-weighted in our average because no pollster is counted more than once. But it seems odd that Democrats haven’t responded with their own internal polls, as they had done earlier in the campaign.

But right now, let’s take the polls’ word for it; if Republicans sweep those nine close races (plus South Dakota), the GOP would pick up 10 seats, controlling 55 in the new Senate. If Republicans lost all of them (including Georgia, Kentucky and Arkansas), they’d pick up only two seats — holding 47.

In other words, the final outcome for the Senate could be anything from a minor Republican gain to a GOP romp. At the moment, the state of play seems manageable from a Democratic perspective, but the party’s position is perilous. A tiny shift could tip the canoe and spill a lot of Democrats overboard.