Democratic Sen. Mary Landrieu of Louisiana is in danger of losing re-election. Polls show her trailing Republican Bill Cassidy, and President Obama is deeply unpopular in Louisiana. But Landrieu does have at least one advantage: She’s an incumbent.

Figuring out who will win a Senate election that’s months away requires figuring out what matters and how much it matters. Does the president’s popularity affect Senate races? Or should you only look at the horse-race polling?

FiveThirtyEight hasn’t released its Senate model yet, and different statistical models look at different things. But simple models tend to do well. Last month, I analyzed Senate elections since 2006 and showed that even early polls (taken from in the first half of an election year) have been a better predictor of the outcome than the president’s approval rating. Although presidential approval still matters.

But some modelers add a variable for incumbency, including the folks at The Monkey Cage. The inclusion of such a variable makes sense on its face. While incumbency may not tell us much in addition to polls, Democratic incumbents in red states and Republican incumbents in blue states have overcome their state’s partisan tide many times. And as it turns out, being an incumbent does help a candidate, even when taking into account early presidential and polling information.

What I’ve done below is rerun my analysis from a month ago with up-to-date polling. I’ve only included races in which an incumbent is running. Keep in mind, we’re talking about the polling average since January, so the model’s odds will tend to be more pessimistic for a candidate like Mark Pryor, an Arkansas Democrat, who has done better in the most recent surveys. Also, some states, such as Alaska, have been difficult to poll, even at the end of the campaign.

What’s most important here is to see how the odds change depending on the variables included. 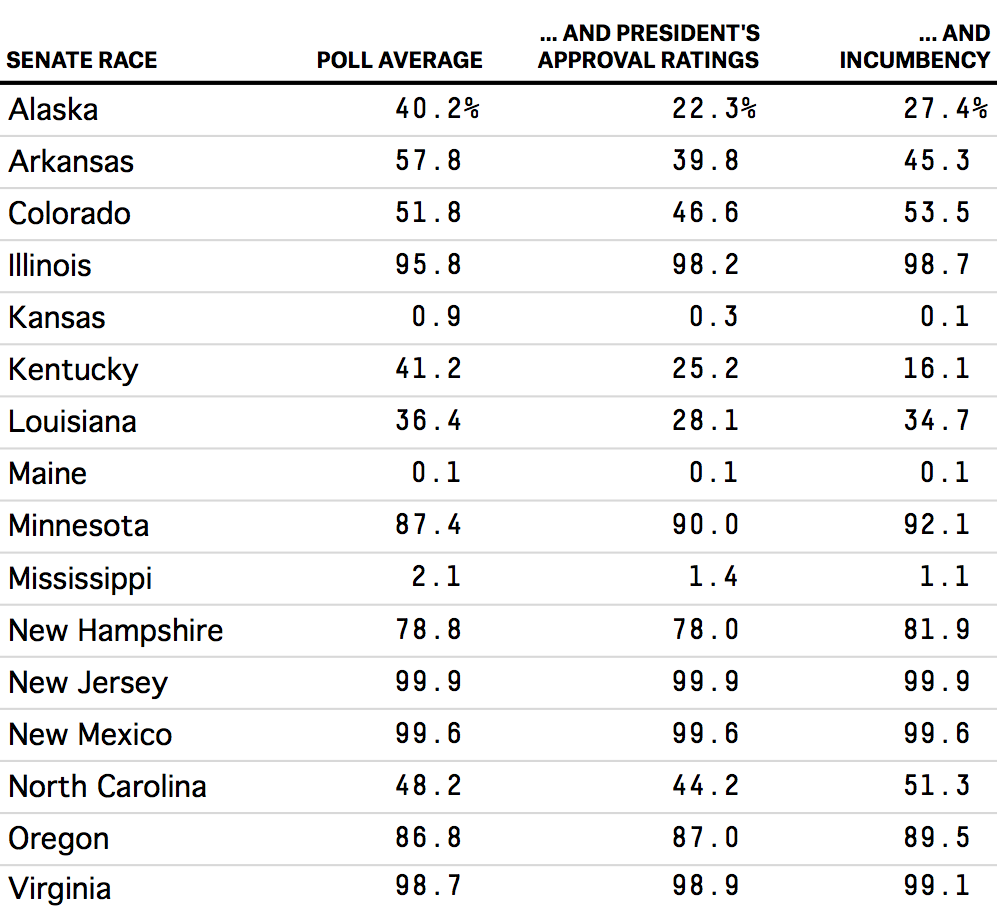 Being an incumbent doesn’t cancel out the effects of an incumbent president who has a very low (or high) approval rating. It does, however, have an additional effect. Most of these races aren’t competitive enough for incumbency to make much of a difference. New Hampshire Democrat Jeanne Shaheen has about an 80 percent chance of winning her Senate race no matter what you throw into the model. Democratic Sen. Jeff Merkley of Oregon is just below 90 percent in pretty much every forecast.

In Louisiana, Landrieu still has only about a 1-in-3 chance of winning even when her incumbent status is included. Her polling at this point isn’t good enough for incumbency to put her over the top.

In the closest races, however, incumbency may very well turn a loser into a winner.

Likewise, Democratic Sen. Mark Udall’s chances in Colorado climb back over 50 percent when we account for the fact that he is the incumbent. And because President Obama’s approval rating in Colorado is low (at 40 percent) but not as low as in Arkansas (below 35 percent), the model calculates the incumbency effect overrides the ill effects of Obama’s rating.

Overall, the effect of incumbency isn’t large. It could make the difference in some tight races, but it’s usually not enough to save a senator who doesn’t have at least some other things going for her.