Republican Kentucky Senator Mitch McConnell is fighting for his political life — or is he? The Senate minority leader is nearly tied in the polls with Democratic opponent Alison Lundergan Grimes. But President Obama’s approval in Kentucky is in the low 30s, suggesting the Democratic brand is so unpopular that McConnell could be fine by the time votes are cast. These competing indicators have led to myriad predictions from political analysts. The Cook Political Report rates the race as tossup, the Rothenberg Political Report puts it in the leaning Republican column, and Sabato’s Crystal Ball goes one step further at likely Republican. My colleague Nate Silver’s forecast, meanwhile, says McConnell has a 75 percent chance to win.

Kentucky isn’t the only state with a disparity between what the polls are telling us and the state��s opinion of Democrats. Dems’ other possible Senate pickup opportunity, according to the polls, is in Georgia, a state that didn’t treat Obama kindly in 2012. The polls are also close in Alaska, Arkansas, Louisiana and North Carolina, despite Mitt Romney’s success there in the last presidential election.

More than six months from the midterm elections, current polling and past precedent are competing for our trust. I analyzed which measure is more indicative come November, and it turns out that polls are a more robust metric even though their numbers are still sparse and there’s still so much time remaining before the election. That’s not to say that a president’s approval rating is useless: It can help refine early polls to make them more accurate. This year, when we factor in both, it doesn’t look promising for Democrats in Alaska, Arkansas, Kentucky or Louisiana.

For my analysis, I took a RealClearPolitics-style average of all the polls1 for 107 races since 2006.2 Separately, for comparison, I collected the president’s approval rating in the matching states in the first half of the year.3

Once that was all in place, I produced this chart, which shows that early4 polls do a pretty good job of forecasting the final vote margin. 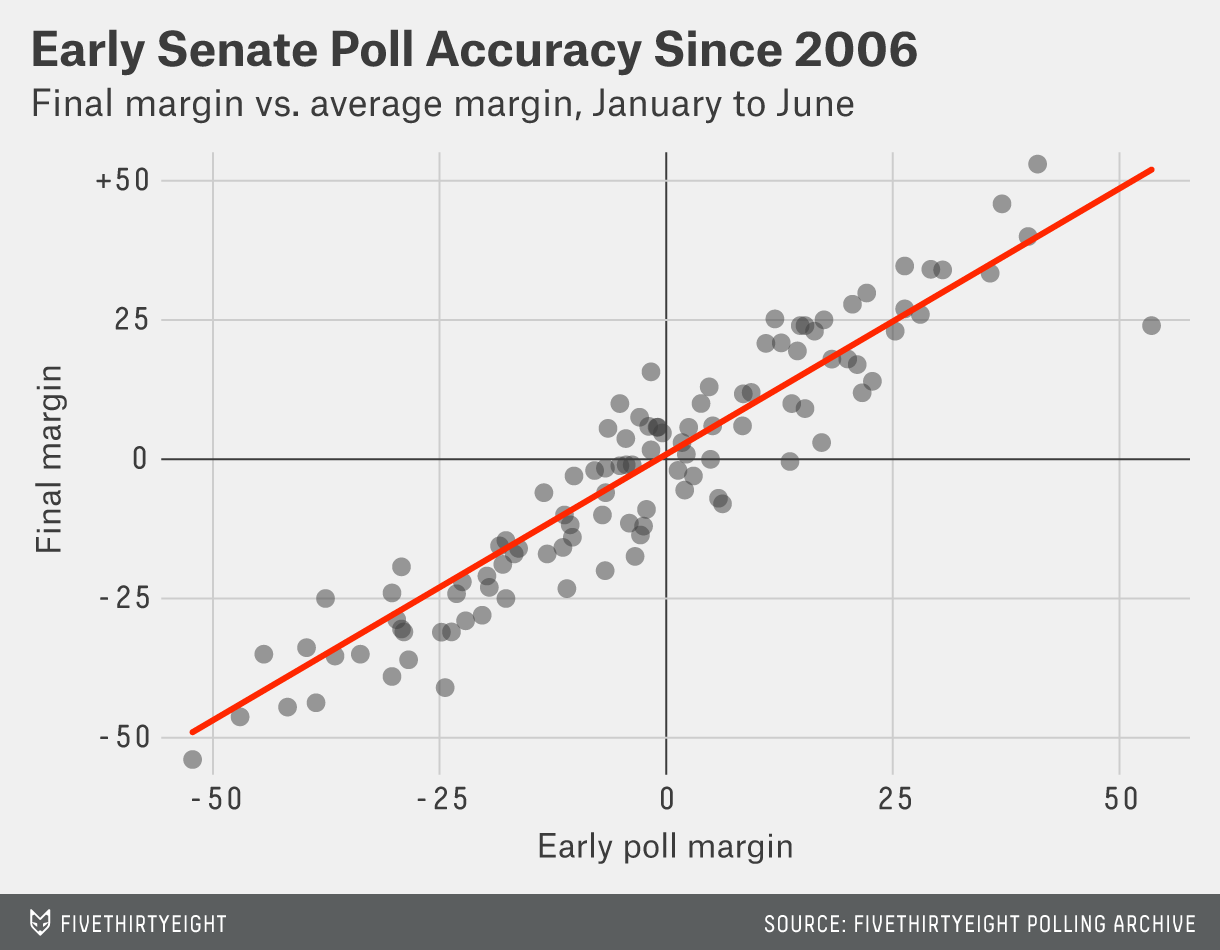 The average error between the early polls and the final results was 6.4 points.5 For comparison, in the 2012 Senate race, polls taken in the final month before the election still had an average error of 4.8 points.6 Overall, the president’s party’s candidate won 83 percent of the time he or she led in the early poll average and lost 88 percent of the time when he or she trailed.

A president’s approval rating isn’t as strongly tied to the ultimate result. There is a link — just a weaker one. Note how much more scattered the data points are in the chart below compared to in the chart above.7 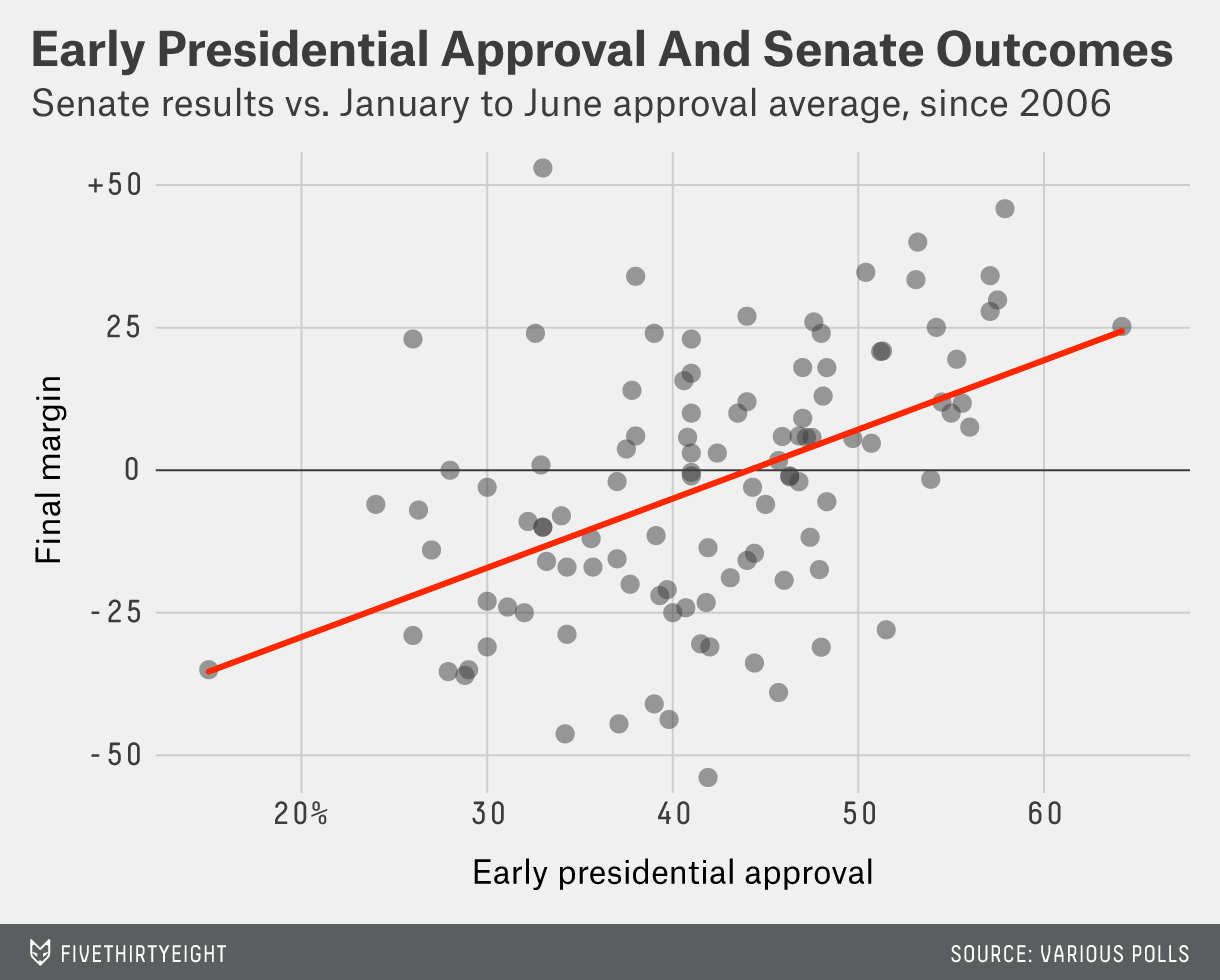 But even though polls are better predictors than presidential approval, the latter still has plenty of information to offer. When I combined early horse-race polls and presidential approval, the median error in early-cycle predictions dropped to 4.0 points.8 That’s nearly two points lower than using the polls alone, and the average error dropped about a point to 5.6 points.

The fact that presidential approval ratings do matter in addition to early horse-race polling should worry some Democrats in 2014. Right now, I estimate Obama’s approval rating is somewhere between 30 percent and 33 percent in Alaska, Arkansas and Kentucky.9 In Louisiana, I estimate it to be in the high 30s.

To give you an idea of how the data suggests Obama is going to hurt these candidates, I pulled probabilistic 2014 projections10 from a model that looks at both the polls11 and Obama’s approval rating and one that looks at only the polls. The table below shows the Democratic candidate’s chance of winning. (The states included have had at least one poll taken in 2014.) 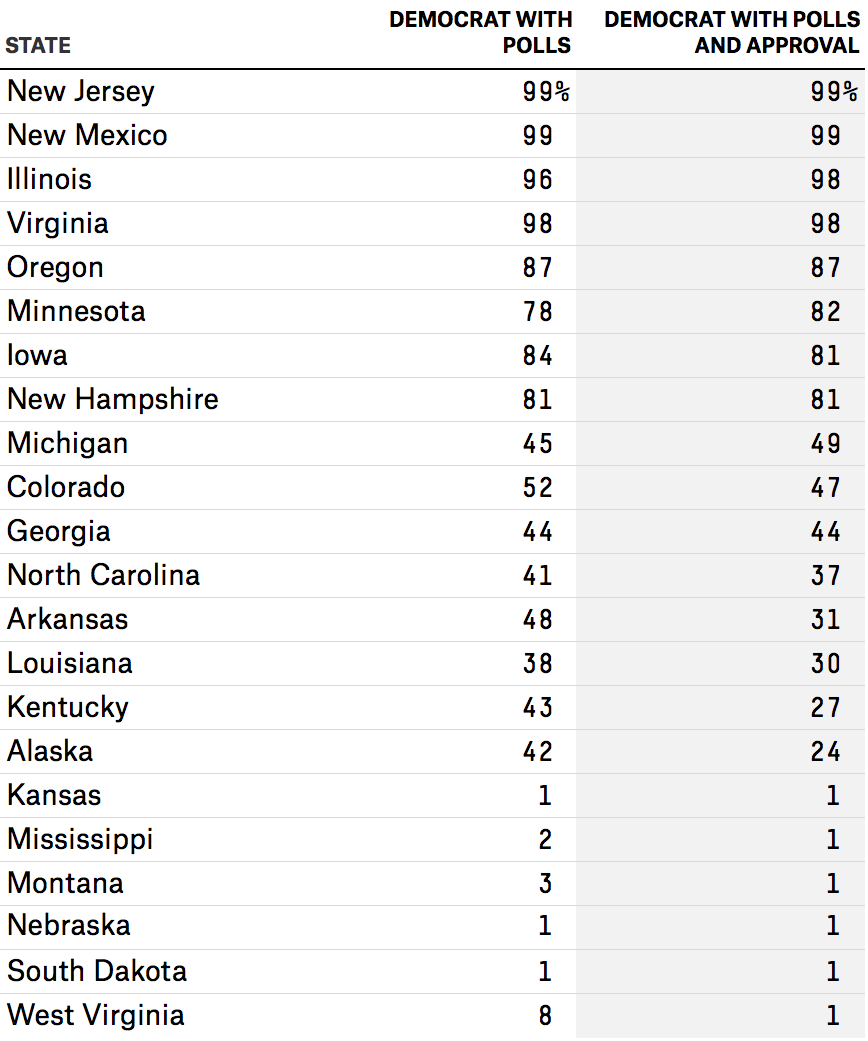 Using polls and approval ratings, the current close races in Alaska, Arkansas and Kentucky are estimated to favor Republicans. (For instance the model gives McConnell a 73 percent chance to win, which is quite close to Nate’s estimate.) In Louisiana, Obama’s rating hurts Democratic Senate candidate Mary Landrieu, but the current polling average this year already had her projected to lose. In Georgia and North Carolina, Obama’s approval rating is high enough that it doesn’t hurt the Democrats too much. Democrats Gary Peters in Michigan and Al Franken in Minnesota are likely helped a bit by President Obama. Overall, this simple model puts Democratic losses in the Senate at 6.8 seats, just off the FiveThirtyEight Senate forecast of 5.8 seats, which takes into account other factors including fundraising totals and candidate ideology.

Still, it’s important to emphasize that we’re talking about early numbers. Twenty of the 107 races from 2006 to 2012 in our model have errors of 10 points or greater, even when controlling for both approval and early polls. Ohio Republican Rob Portman beat Democrat Lee Fisher by nearly 17.4 points in 2010, even though early polls were close and Obama’s approval wasn’t bad early in the year. The same goes for Republican Roy Blunt in Missouri in 2010.

So Mitch McConnell’s close race in Kentucky this year is not just about polls, it’s about Obama’s approval rating, too. Conversely, even if Obama’s approval rating is holding Democrats back in the midterms, remember that statewide polls are usually the more predictive metric. Smart political forecasts incorporate both.