Our gubernatorial projections took a little longer than I expected. The original idea was that we could just take our Senate model, tweak a few of the parameters, and be ready to go. Indeed, our gubernatorial forecasting model shares a lot of the Senate model’s DNA. The basic blueprint of taking a robust average of polls, supplementing them with some demographic information and then using them to project the final standing of the candidates remains the same.

But there were more differences between polling in governors’ races and Senate polling than anticipated. A particularly noteworthy trait of the polls of governors’ races is the tendency in some cases for those polls to regress toward the mean.

For instance, suppose we’re 90 days before the election and we’re looking at the polling average in a state where the governor is retiring. In this state, Candidate A leads Candidate B by an average of 15 points in the polls. Knowing nothing more than that it’s 90 days until the election, and Candidate A leads by 15 points in a race with no incumbent, what’s our best guess as to the margin that Candidate A will eventually win by on Election Day?

Our first guess might be 15 points, the margin of Candidate A’s lead in the polls. We might acknowledge that our guess is subject to a large margin of error; while the candidate is leading by 15 points, maybe he’ll actually win by 25 points, or by only 5 (or on rare occasion, he’ll lose). But if we had to pick just one number, we might say: “All right, this candidate is leading by 15 points in the polls. So I’m going to guess that he’ll win by 15 on Election Day.”

But that wouldn’t be the best guess. It turns out the best guess would be about nine points because we should expect the race to tighten.

This is all based –- like everything else in our models -– on historical evidence. In governors’ elections since 1998, for example, there have been 24 candidates in open-seat races who, 90 days before the election, had a lead of 10 points to 20 points in the polls (i.e., “about” 15 points). Three-quarters of these candidates –- 18 out of 24 –- underperformed their polling on Election Day. On average, they won not by 15 points, but by 9 (although only one actually lost).

The chart below presents this concept in a somewhat more rigorous way. It evaluates the actual performance, on Election Day, of candidates in open-seat governors’ races who were leading in the polling average 90 days before the election.

Performance of candidates in open-seat gubernatorial races since 1998, based on polling average 90 days before Election Day: 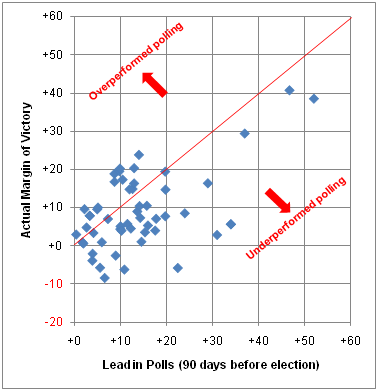 This is regression toward the mean. Generally speaking, open-seat races are expected to be tightly contested. Since 1998, two-thirds of them have been decided by 10 or fewer points, and almost a third have been decided by 5 or fewer points. So, if the polling is projecting a blowout, the race should be expected to tighten some. The greater a candidate’s lead is in the polls, the more profound the tendency: a 30-point lead will regress more than a 3-point lead. Of course, there have been plenty of exceptions in the past, and there will be some this year, but in general, we can improve our forecasts quite a bit by accounting for this tendency. There are a handful of other factors, like the presence of a large number of undecided voters, and the further away from Election Day it is, that also helps to predict the extent to which a candidate’s lead in the polls might diminish.

What’s interesting is that this tendency is much less robust in Senate races: large polling leads there are more likely to hold. There is some theory that might help to explain this. Congressional races are national in ways that governors’ races are not. Candidates in Congressional races, for instance, can get money from national party committees, like the National Republican Senatorial Committee, and from individual donors outside their states. This, of course, can be a boon to a candidate in a competitive race. But, these national donors have to spend their resources wisely: they’re unlikely to contribute to a candidate, for instance, who is trailing by 20 points in the polls. Thus, even if there were otherwise some natural tendency of open-seat races to tighten as voters take a second look at the candidates, it may be impeded by the fact that, in races for Congress, a candidate trailing in the polls will often lack the resources to run an adequate campaign.

So here’s the takeaway: governors’ races, when there is no incumbent, tend to tighten down the stretch run.

What about when there is an incumbent? Well, there the rules are somewhat different, so we’ll reserve that discussion for another post.