In preparation for the 2015 NFL season, FiveThirtyEight is running a series of eight division previews, each highlighting the numbers that may influence a team’s performance (including projections and rankings based on ESPN’s preseason Football Power Index). This is our NFC West preview.

Football isn’t baseball, where it’s easy to size up a player’s value objectively. Outside of quarterbacks and fantasy points, NFL player evaluation — even the statistical variety — is more art than science. We’re not really even sure how important individual positions are overall, much less how valuable individual players are within them.

But the kicking game is the baseball of the NFL — it’s one (possibly the only) thing that can be measured independently, and it’s rich with history. Earlier this year I wrote “Kickers Are Forever,” a passion project about the incredible and almost eerily consistent improvement NFL place-kickers have shown over the past 80-plus years, and the huge (though largely unnoticed) impact this has had on the game.1

The NFL is a game of lopsided scores and relatively small margins. Top kickers are likely worth more than people think, and top players who aren’t QBs or kickers are likely worth less than people think. The top five kickers over the past five years have added about 0.4 points per game to their teams vs. expectations.2 That may not sound like much, but it’s more than a typical non-QB contributor on a championship-contending team: The top five teams over that period have outscored their opponents by only an average of 6.4 points per game, with QB production alone accounting for much of that. In other words, the difference between an average team and a contender is one quarterback plus a bunch of players worth fractions of a point (on average) each.

Thus, to my editor’s delight, I am devoting this NFC West preview to its diverse and interesting assortment of kickers. Who wants to read about Russell Wilson anyway? There will be time for quarterbacks later.

Here are the career paths of all kickers who played in 2014 (minimum 10 attempts per season shown), with the NFC West’s kickers highlighted3: 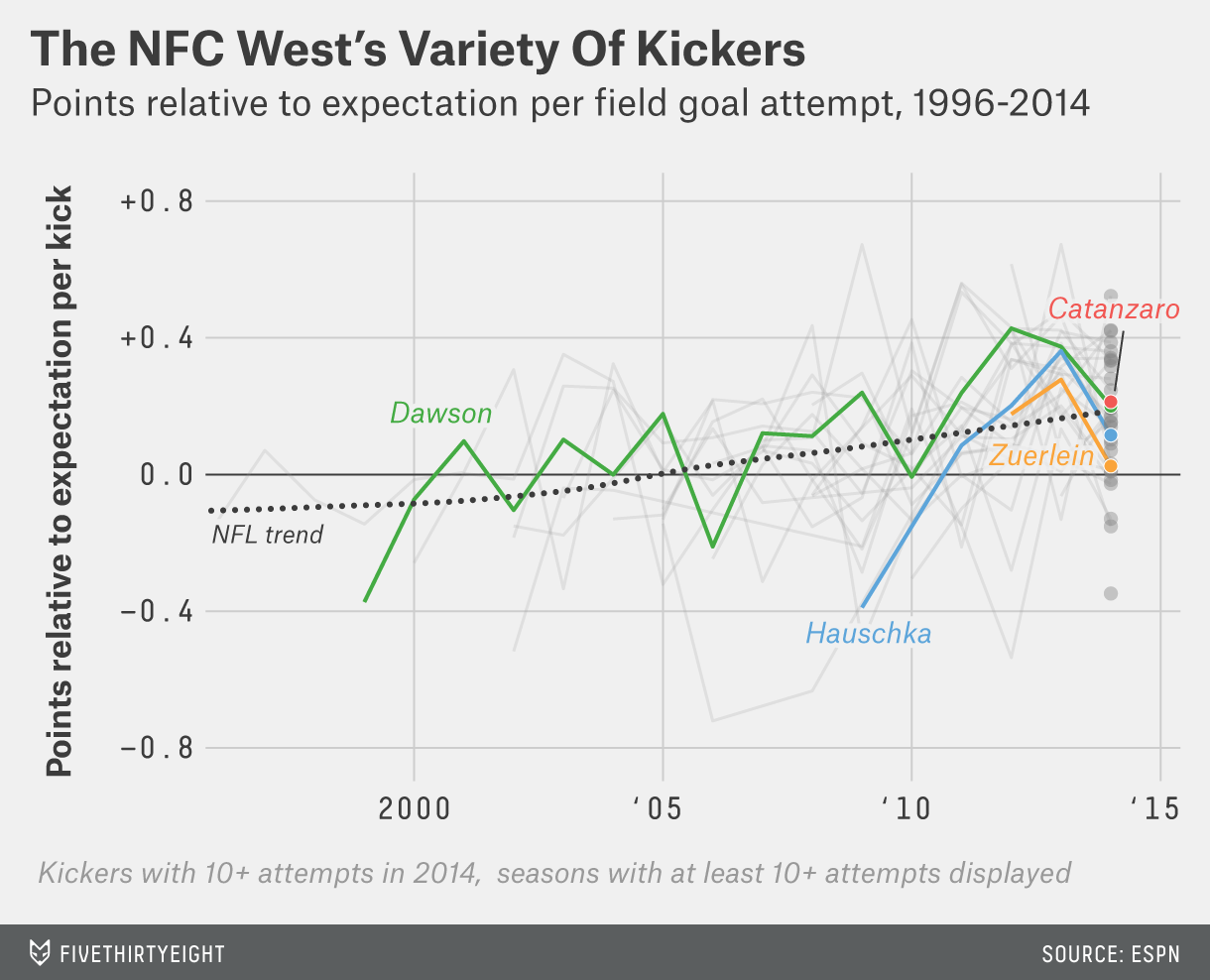 The dotted line is the relentlessly rising league expectation. The four kickers in this division are some of the best in the history of the game at putting a ball through the uprights, yet they’re fairly mainstream (though definitely above average over the last few years combined) by 2014 standards.

And each has his own story.

How clutch is Steven Hauschka?

Now that back-to-back Super Bowl participant Seattle has to field a team without getting more than $20 million in savings from its underpaid quarterback, it will need every last drop of value it can get. Enter Steven “Hausch-Money” Hauschka. Over the past four years, Hauschka has been worth about +0.15 points per game from his field goal place-kicking alone.4 Although 2014 was a slightly “off” year for him (he missed six field goals, though all from more than 40 yards), he has been trending upward.

When I met Hauschka at the Super Bowl Media Circus last year, I got a chance to ask him whether kickers can truly be “clutch” and he said, “I think if you’re a 90 percent kicker, the best you can do under the most important situation is be a 90 percent kicker.” Good answer!

The hunt for “clutch” in sports continues apace, and I won’t settle the issue today. One reason this debate never ends is that there’s almost never enough data. The same holds for kickers, who may see only a handful of opportunities to win or lose a game on their own, ever. So rather than model this, I thought it might be fun just to visualize all of Hauschka’s kicking. In his four seasons with Seattle, this is what he has done — broken down by quarter, distance and the score margin at the time of the kick: 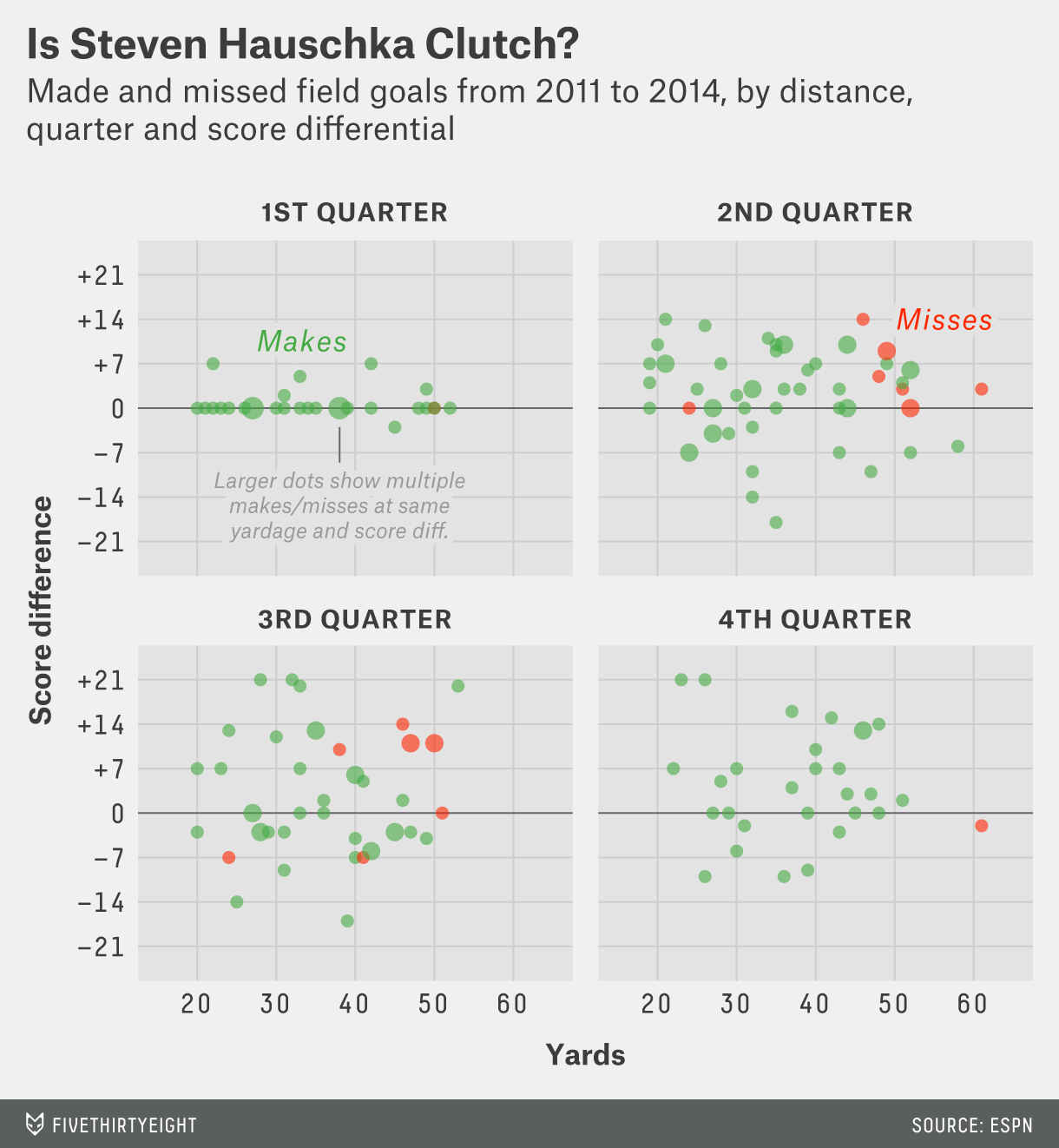 He has missed only one kick in the fourth quarter, and it was from more than 60 yards. He was 10-0 in the fourth quarter when 3 or fewer points separated the two teams. He has more misses in the third quarter, but most of them came with his team already up multiple scores. In close situations (within 3 points) he was 14-1. He has missed only three of 39 attempts at any point in the game with his team trailing at all. He has missed five of 45 attempts when his team was tied (and only one of the misses was shorter than 50 yards).

Whether or not “clutch” is real, so far Hauschka looks like what we’d want clutch to look like.

Of the four NFC West kickers, rookie Chandler Catanzaro had the best campaign last season on a kick-by-kick basis. He made it through the first half of the season without missing at all, earning him my mid-season Rookie of the Year designation, and then immediately missed four kicks in his next four games (including ones of 34 and 36 yards).

Despite this stumble, as far as putting the ball through the uprights, he ranks as the fifth-best rookie kicker of all time.5 Yet, in a testament to the march of history, he ended up almost exactly where a local regression says that a typical rookie kicker in 2014 should be: 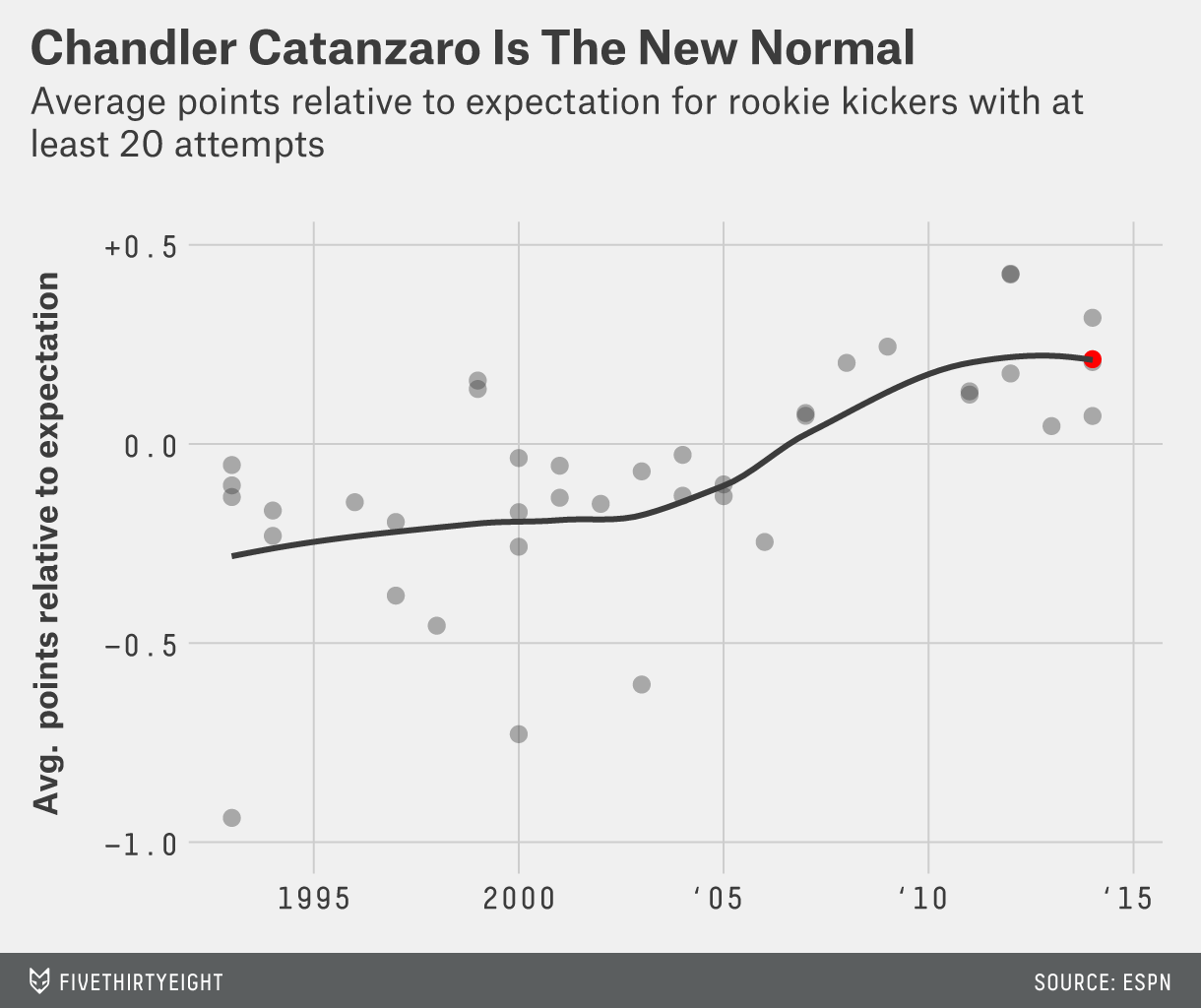 That line wasn’t coerced to point directly at Catanzaro, that’s just what 12 of 14 from 30-39 yards and 12 of 14 from 40-plus gets you in today’s NFL. As you can see, Catanzaro didn’t even grade out as the best rookie last year: That award would go to the Tampa Bay Buccaneers’ Patrick Murray, who had a lower field goal percentage than Catanzaro (84 percent vs. 88 percent), but who gets a lot of credit for making five of his six attempts from 50-plus yards (Catanzaro made two of three).

While most of the headlines in Arizona will probably continue to follow quarterback Carson Palmer’s return from injury or wonder whether Chris Johnson can regain his former glory at running back — or both — the Cardinals’ fortunes may turn on this one young player’s development.

Will Greg Zuerlein shank football into a new era?

Although I can hardly wait for the empirical results of the Rams’ great and/or insane QB swap — in which St. Louis traded underachieving former No. 1 pick Sam Bradford for overachieving gunslinger Nick Foles — there’s only one issue that could possibly trump that for my attention: The extra point.

As I’ve written before, the last time that NFL kickers had as much impact on the game as they do now, the NFL had to change the rules to knock them down a peg. During this offseason, the NFL responded forcefully6 — by moving the extra point back 13 yards. Oh, did I say “forcefully”? I meant “bizarrely.”

This change will likely be ineffectual, but it will have some effect. And it has the potential to dramatically affect teams like the Rams.

Greg Zuerlein is not a bad kicker. Although he had the worst season relative to expectation in the division in 2014 (as you can see in the first chart of this post), his three-year performance is right around league average for the period.7 Plus, he’s still young and may improve. He has a strong leg, hitting 13 field goals of 50-plus yards in three years, including 58- and 60-yarders on the same day against Seattle as a rookie.

But new rules change how players are valued. With the extra point now a 33-yard attempt, inconsistency on shorter kicks will be punished more than ever.

So what goes into a shank, exactly? Most kickers these days have leg and technique enough to make shorter kicks, so for this question I thought I’d look at blunder rate from a slightly different angle: When kickers miss, where do they tend to miss from? I’ve plotted each of the 2014 kickers who have at least 30 games of experience8 and arranged them by their overall miss rate for all kicks from less than 40 yards (including extra points). Bubble size represents the number of misses per game of a given distance for each player: 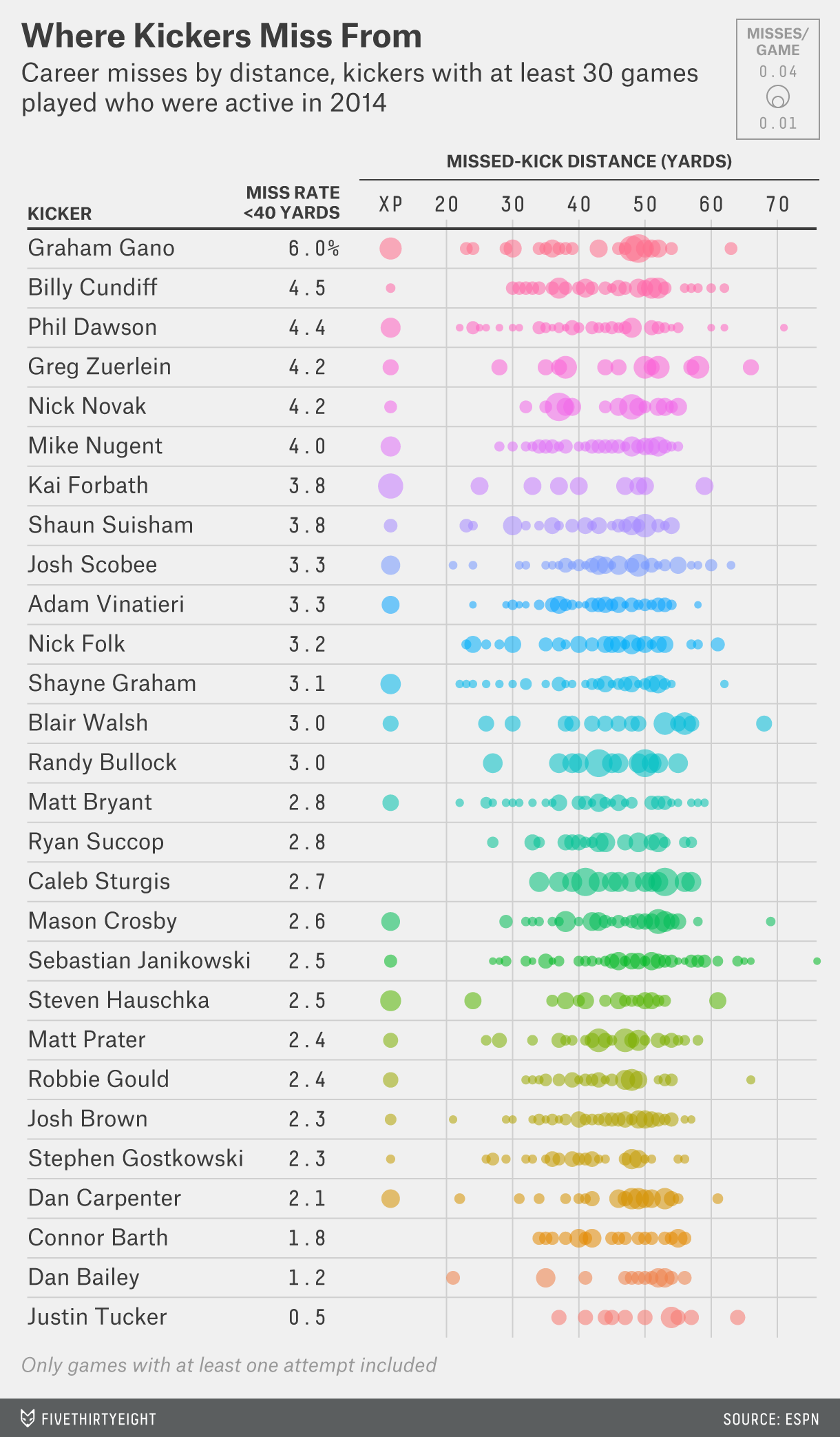 Zuerlein is tied for the fourth-highest career shank rate among active kickers, the second-highest rate among kickers with fewer than 10 years of experience. And notice how Zuerlein’s misses are spread out fairly evenly across distances. Unlike, say, Justin Tucker, who pretty much only misses the occasional long kick to keep things interesting.

While a slightly higher chance than usual of missing an extra point may not seem terribly important on the margins, it is given the new rules. Being slightly worse at these kicks may change the math decidedly in favor of going for 2 points in a broad range of situations. That is, given Zuerlein’s history, Rams coaches should probably be thinking 2 points first.

There will surely be some extra points missed this year. I will personally be rooting for this to happen early and often — if it generates enough press, perhaps it will set off a cascade that will make “going for it” the new normal. To that end, Zuerlein may be our greatest hope.

After quarterback Colin Kaepernick got paid despite still suffering from the departure of Randy Moss, the 49ers have seen drastic changes like Reggie Bush arriving in town and Michael Crabtree moving across the bay. Their place-kicking game appears to be a rare spot of calm with 40-year-old, 16-year NFL veteran Phil Dawson at the boot.

This is a pretty interesting crossroads for Dawson. His last two seasons have dropped a bit from his peak, but are still among the best two-year stretches of his career. Though not much of a media sensation, Dawson has had a remarkable career of steady improvement. Despite his lack of flashiness (he spent 14 seasons in Cleveland, for God’s sake), his career path has been quite similar (only a bit less swingy) to that of cross-bay rival and former first-round (17th overall) draft pick Sebastian Janikowski: 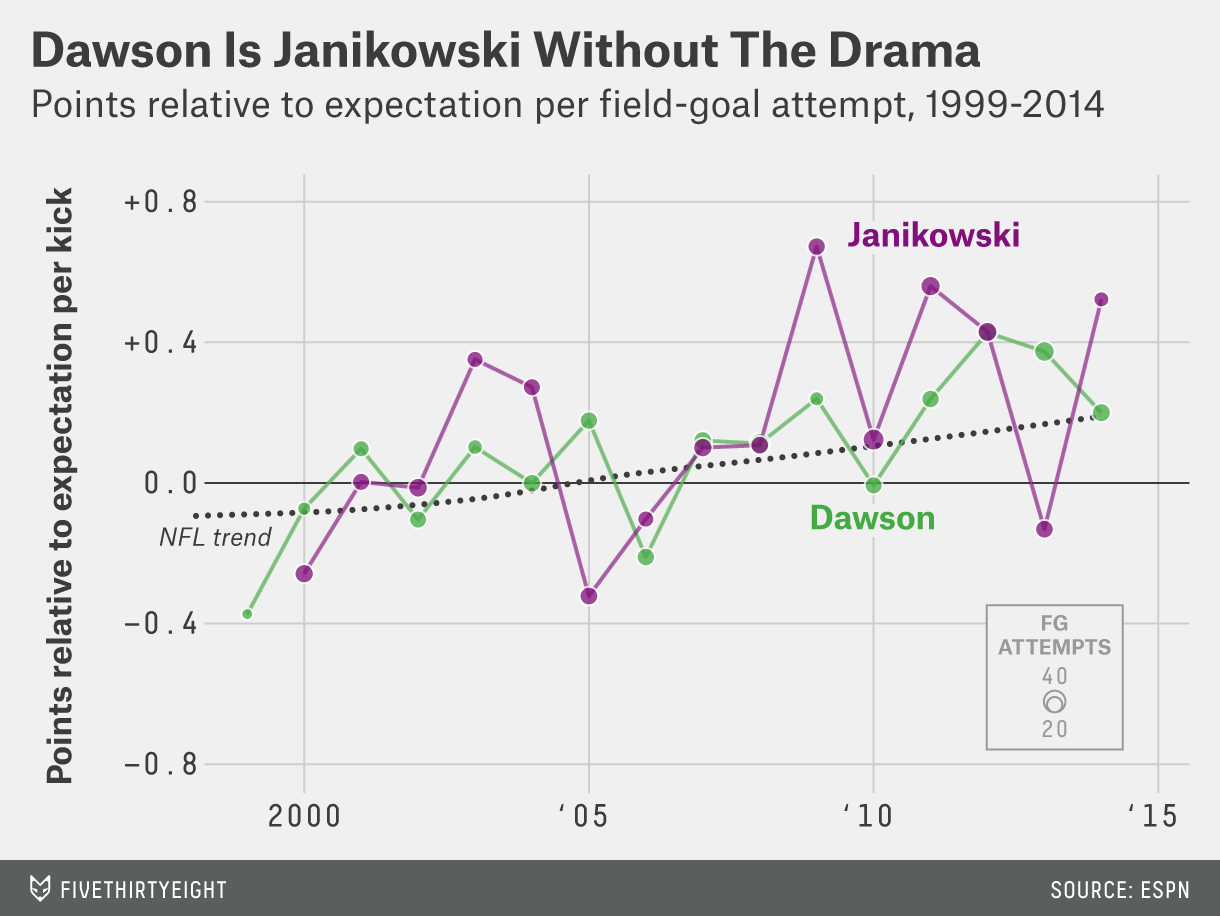 One question that the uncanny improvement of kickers raises is whether it is more a result of old kickers getting better or new kickers being better to begin with. I can pretty definitively answer this: It’s both. For every Catanzaro out there, there is a Dawson.

Dawson has gotten better and better while hewing close to the improving league average for 16 years. Dawson’s total points above expectation (not year-weighted) are the fifth-highest since 1993 (and likely ever). In other words, taking both skill and length of career into account, Dawson is quite likely the fifth-best kicker of all time, independent of the era he’s playing in.

So what happens this year? Will Dawson’s age finally catch up to him, or will his knack for improving his game lead him to new career heights? Who said kicking has no intrigue?