The 2012 London Olympics were filled with so many dramatic victories for the U.S. swimming team that the debut of then-15-year-old Katie Ledecky was a bit overshadowed. She entered only one event and won it easily. Three years later, Ledecky is the most dominant freestyle swimmer on Earth. She’s the first to own world records in three different freestyle distances simultaneously since Ian Thorpe. Barring the unforeseeable, the 2016 Olympics will undoubtedly make her one of the biggest stars in athletics.

Over distances of 400 meters or more, she’s already faster than Mark Spitz. Yes, Mark Spitz, winner of nine Olympic gold medals — tied for the most of anyone not named Phelps — the guy who set world records at three freestyle distances, including the 400 meters, in which his top world-record time (4:07.7) now trails Ledecky’s (3:58.37) by over nine seconds.

But this week she made headlines at the swimming world championships not only for her usual slate of fresh records and golds in her usual distances, but also for expanding her dominance by taking gold in the 200-meter race. Being able to win both sprints and endurance events is much more common in swimming than in track,1 though it has been getting rarer of late.

And Ledecky, who turned 18 in March, is just getting started. Who knows what heights she might reach? For now, we know she has been getting better and better at every distance — despite racing some only occasionally and/or in lower-pressure situations: 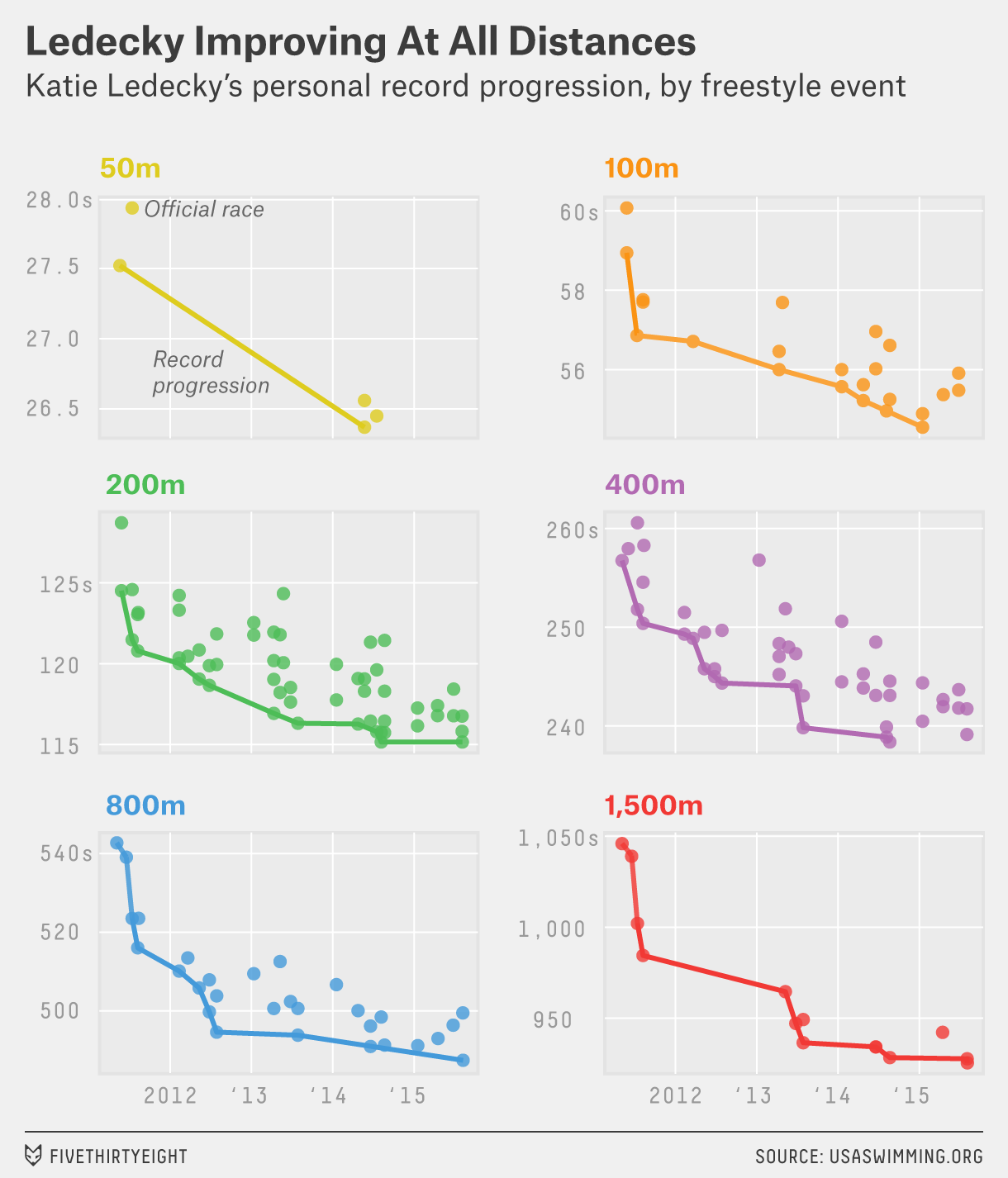 While her meteoric improvement has started to flatten out a bit (as we would expect), there are no indications that she has peaked (or valleyed, as the case may be). She just matched her personal best of 1:55.16 in the 200 meters, and her times in that event are still declining (with a fairly linear trend). She is currently just over 2 seconds off of Federica Pellegrini’s record of 1:52.98 — which Pellegrini set just before turning 21. Pellegrini first set the record in this event at age 18, with a time of 1:56.47 — more than a second slower than Ledecky’s time Wednesday at the same age. Ledecky’s 100-meter time is a little bit further away from Britta Steffen’s record — about 2.5 seconds back — but Ledecky has been improving that mark by about 1 second per year even without it being one of her main races. It’s conceivable that she could become the first swimmer since Shane Gould to own all five traditional distance records (the 50-meter sprint only became recognized in 1976).

Ledecky’s dominance has led to inevitable comparisons to men. She made a splash in April when she matched Michael Phelps’s time in a 400-meter preliminary, and her latest 1,500-meter record time has only been bested by 80 men in the world this year.

She will likely rise even higher in those ranks in coming years, although she is still unlikely to topple any current male records. (Sorry to be a party-pooper!) Her best shot would theoretically be in the 1,500 meters, where she is about 55 seconds behind Sun Yang of China. While she seems to break her own record in that event practically every day, she has improved it by only 11 seconds in the past two years.

However, she has caught up with or surpassed many record-holding men from the past (like Spitz). We can compare the lifetime progression of her personal-best swims (she has been on USA Swimming’s radar since she was 6) to the progression of the men’s world record for each distance like so: 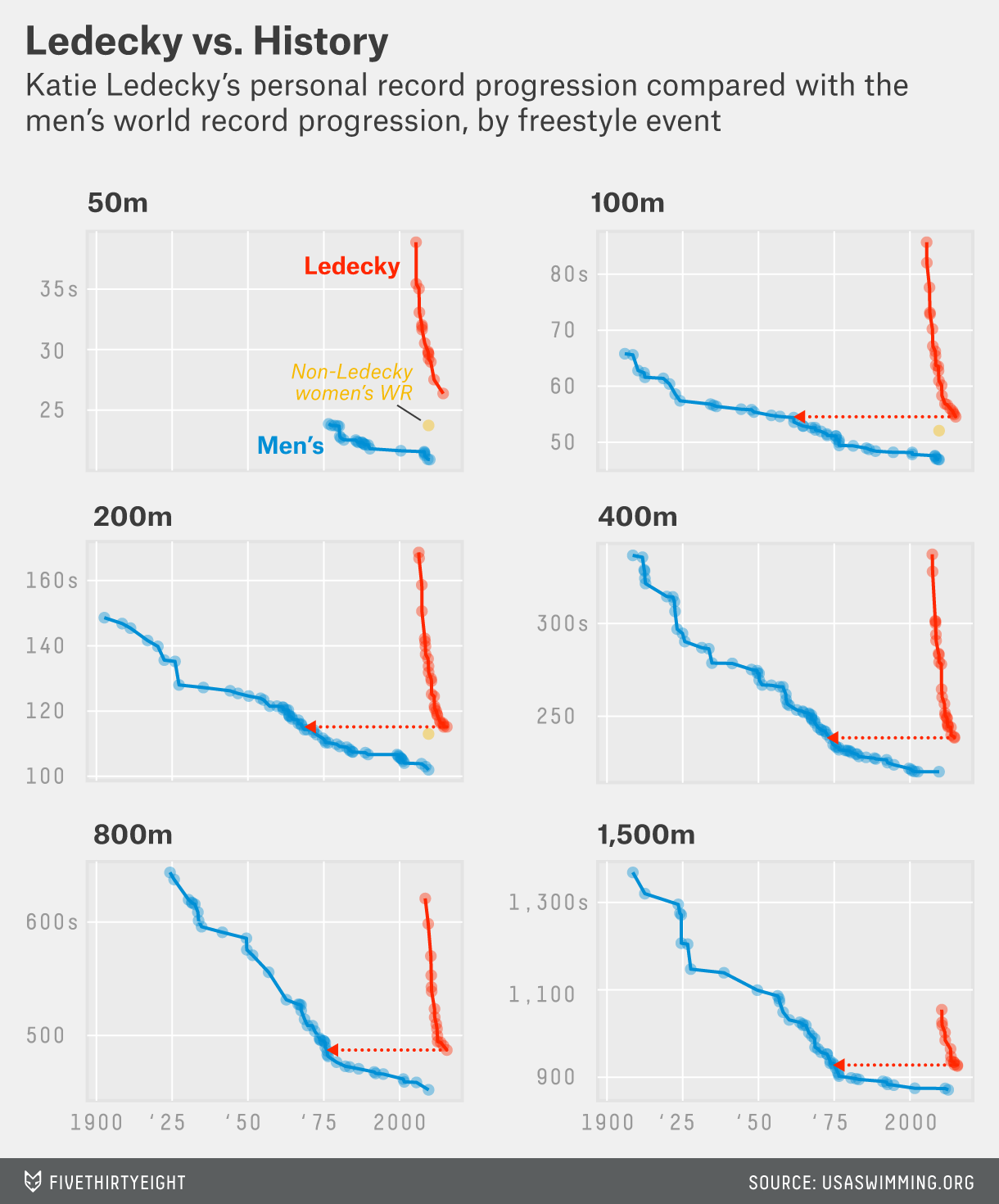 It’s fascinating that even her juvenilia has often been faster than many swimming legends. At just 13 years of age, Ledecky swam the 100-meter event faster than Hawaiian legend Duke Kahanamoku, who set his 100-meter world record time of 1:00.4 in 1920 — at age 30. (It’s almost like athletes get better and better over time.)

By now, she has put the whole first half of the 20th century in her wake. For example, it’s highly probable that before June 1975, no human in history had ever swum 1,500 meters faster than Ledecky did Tuesday.

So here’s a timeline of just when Ledecky’s current bests would have been the fastest ever:2

In other words, it’s not just that she can play with the boys. If you took Katie Ledecky in a (backward) time machine to some point before August 1961, she would quite likely be the fastest human being in water in the history of the Earth — over any distance.3

As she keeps improving her times and lowering her records, I like to think of each new milestone as her advancing through time, knocking down legend after legend as they pop up. It isn’t just a new record — it’s another period of history in which no one could beat her. How far can she get?

(UPDATE: Aug. 10, 3:50 p.m.): The charts in this post have been updated to include Ledecky’s latest 800m world record, which she set at the world championships on Saturday.