Did you hear about the NFL’s incredible new rule? On a point-after try, a defense will be able to score a 1-point safety by stopping the attempting team in its own end zone. Oh, and the new rule also moved the line of scrimmage for an extra point to the 15-yard line, making it the equivalent of a 33-yard field goal attempt.

But indulge me for two seconds and let’s talk about this 1-point safety, a totally new thing in the NFL. Sure, it’s something that probably won’t come up very often – or, you know, ever. This new safety would occur if the offensive team fumbled the ball backwards, then the players kept knocking it backwards because of their gigantic butter-fingers until an offensive player finally recovered it in his own end zone (yes, on the other end of the field), where they were immediately tackled. (The offense can also score a 1-point safety, but that’s boring.) This opens up the tantalizing possibility of game scores traditionally reserved for baseball, soccer, or curling, like 6-1 (if the only points scored are a touchdown and a defensive point after safety) or 10-1 (if the only points scored are a touchdown, a defensive point-after safety, and two regular safeties).

OK, thanks. Back to the longer extra point: The theory is that the league wants to make the play more exciting by making it less “automatic,” and perhaps by encouraging teams to go for two points more often. They’re unlikely to be very successful on either count.

Kickers now convert extra points more than 99 percent of the time. That will almost certainly drop, but not by very much. It has been bandied about that kickers have made “only” 91.6 percent of attempts from this distance in the last 10 years. But 10 years is an eternity for kickers – they’re a whole lot better now than they were in 2005. As noted by Kevin Seifert, kickers have made 94.4 percent of field goals from this new distance over the last three years, and 96.7 percent last year. And that doesn’t account for the point-after kicks being slightly easier than their field goal counterparts: They’re never rushed for time, and they’re always taken from the center of the field (technically from wherever the kicker prefers). According to Pro Football Focus, kickers have made 97.6 percent of attempts taken from 30-35 yards from the dead-center of the field over the past three years.

When I wrote about kickers in January I developed an era-sensitive model for kickers that at least partially accounts for hash marks (and, if I may, is scary accurate). It’s slightly more conservative than that Pro Football Focus mark, but predicts that kickers would make 96.4 percent of 33-yard kicks next year, rising to about 98 percent over the next 10 years.

This isn’t the first time the NFL has been uncomfortable with how good kickers have gotten at their jobs. In 1974, the league moved the goal posts to the back of the end zone, effectively making XPs and other kicks 10 yards harder. Extra point success dropped from 98 percent the year before to 92.1 percent the year after. But it didn’t take long for kickers to recover: 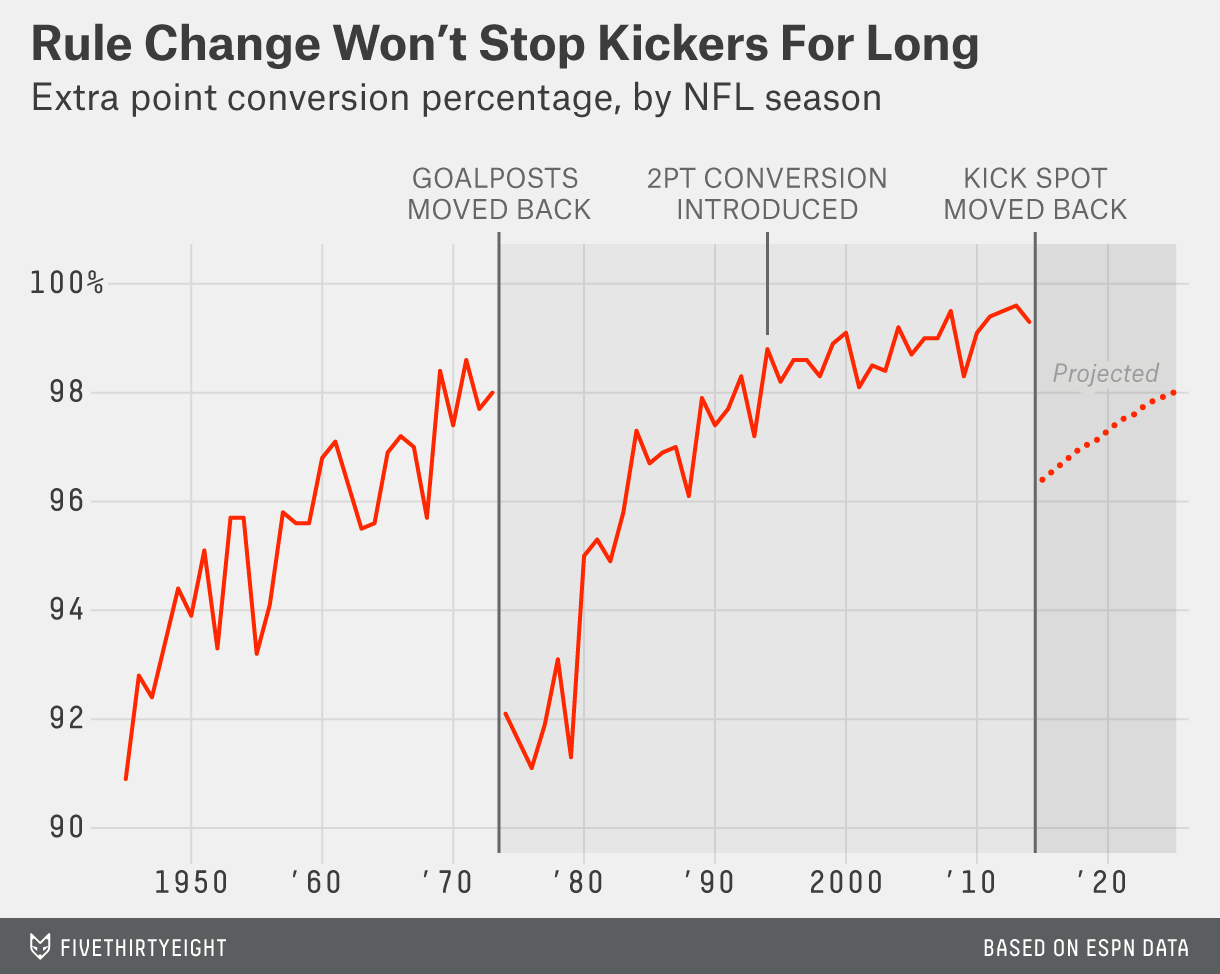 From an excitement standpoint, it’s tough to see a significant difference between teams making their extra points 96-98 percent of the time rather than 99. Even if misses happen slightly more often, they’re still going to be infrequent enough that I’d guess they’re more likely to annoy fans after the fact than keep them in suspense beforehand.

And while this should marginally improve the math in favor of 2-point attempts, it’s not nearly dramatic enough to make going for two points the obviously better option. (It would have been if the NFL had also moved the line of scrimmage on 2-point attempts up to the 1-yard line, per the Eagles proposal.) Defenses will also be able to score two points on the play by returning a fumble, interception or blocked kick for a “touchdown,” as is the rule in college.

And coaches are already pretty irrational about going for two. They have been converted about 47.4 percent of the time over the past 10 years, which would be enough to make them roughly the equivalent of kicking extra points (from an expected-value perspective; though that number may be low because teams that make 2-point attempts tend to be slightly worse than average). At the very least, the expected value of going for it versus kicking is so close that the decision should be dominated by the tactical situation (such as how far ahead or behind they are, and whether they should be playing it safe or trying to gamble) and how good the teams are in short yardage situations. But coaches still basically only make the 2-point attempt when they’re required to.

If there is a big shift in favor of going for two, I think it’s more likely to be a result of coaches deciding the new rule gives them cover for it, rather than a large and fundamental shift in the math. And there’s precedent for this: The all-time high for successful 2-point attempts made was 59, set in 1994 – the year the play was first introduced.