Shooting stars: The Washington Wizards managed an average of 103.3 points per 100 possessions last season. Todd Lindeman and Lazaro Gamio of The Washington Post weren’t satisfied with that one stat. For each player, they show where every shot was made and missed. Lindeman and Gamio said that with just a few changes, “this team could be shooting for the stars instead of shooting itself in the foot.” Ouch.

Fizgig. Wait, fizgig? After his huge analysis of what letters go where in which language, you might have thought David Taylor would be slightly fatigued by his efforts to numerically analyze language. Not so. His latest work uses the Corpus of Historical American English to unpick the biggest words of each decade. It shows which words suddenly fall out of favor, such as “fizgig,” which seems to disappear after 1840. It apparently meant “a gadding flirting girl or woman.” And if you don’t know what it is to “gad,” I pity you.

Pawning data: When someone casually asked, “What are the chances of survival of individual chess pieces in average games?” in an online forum, Oliver Brennan, a programmer and chess amateur, set himself to the task of finding an answer. He used data from 2.2 million master-level tournament games to produce this nice heat map of death (h/t Nathan Yau).

Uber rich: After Uber claimed on its blog in May that “the median income on uberX is more than $90,000/year/driver in New York,” Alison Griswold at Slate was skeptical — so she checked out the ride-sharing company’s numbers. Unfortunately, Griswold couldn’t find a master spreadsheet with the salaries of all Uber drivers so she was forced to go back to basics, spending months interviewing employees and industry experts. She concludes that if such an income does exist, she and the people she spoke to certainly haven’t met the driver who receives it.

The 1 percent: Derek Thompson at The Atlantic was curious about just how much income is needed to put someone alongside the wealthiest 1 percent of Americans. You may have read similar data stories before (I certainly have), but what’s smart about Thompson’s analysis is that he breaks it down by age group, so it’s clear that the older you get, the more money it takes to get into the 1 percent club. 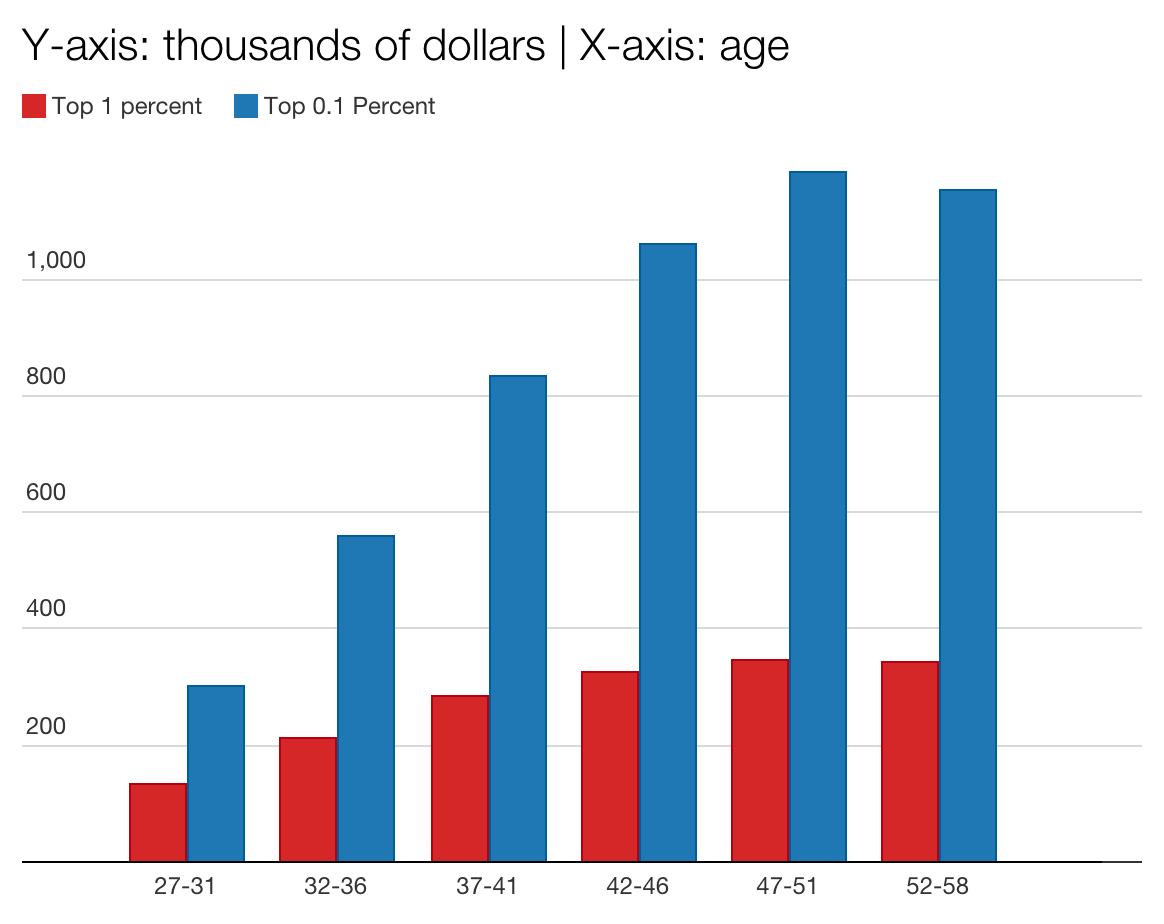 Perception v reality: Using survey data from Ipsos Mori, Alberto Nardelli and George Arnett measure public misconceptions in 12 countries. The article shows how people significantly overestimate the percentage of Muslims in their country and unemployment levels, but when it comes to questions like voter turnout, they put the figure far too low.

Confirmation bias: People tend to stop seeking out information once they’ve found something that confirms what they initially thought. Justin Wolfers at The New York Times shows this to readers by exposing how they have interacted with information on the Times website. Wolfers shows how, when viewing the newspaper’s election forecasting model, Times readers tend to stop clicking once they’ve seen what they expected to see — that the results could go either way.

Berlin Wall beyond Berlin: The Guardian’s Philip Oltermann goes in search of answers to a question that baffles many new tourists to Berlin: “Where’s the wall?” After the border opened Nov. 9, 1989, Berliners, sick of the oppressive structure, began chiseling away at it in earnest. But what happened next is slightly more confusing. The narrative and accompanying interactive map show the where and the why of the Berlin Wall’s next steps. 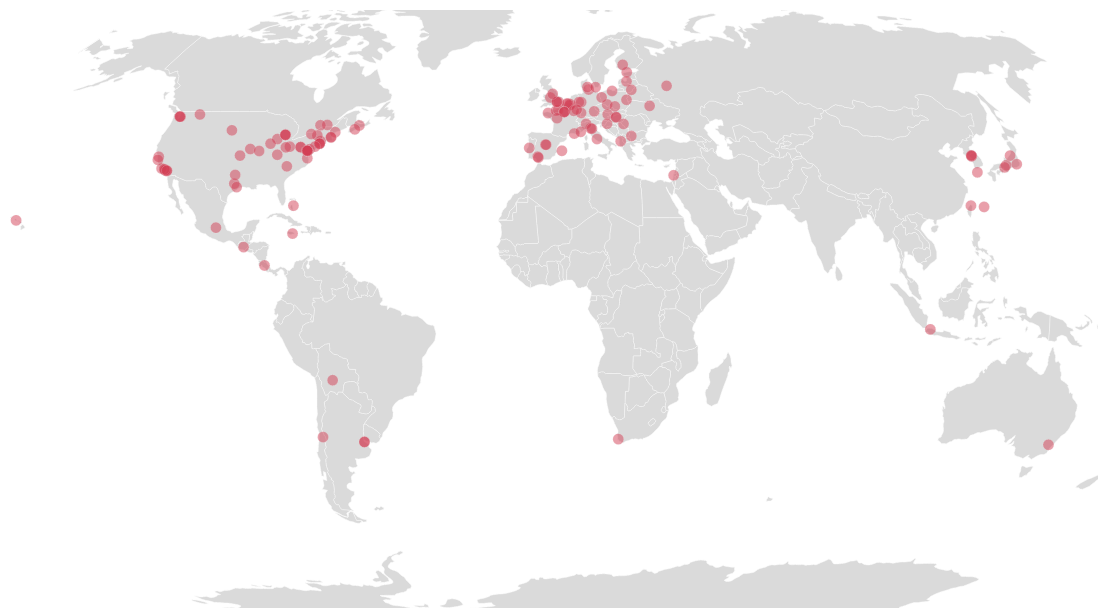 The reliable witch: While fairies and athletes come and go, the most popular Halloween costumes for Americans remain the same: Every year for the past five years, witches, vampires and pirates have been the chosen masquerades. Quoctrung Bui at NPR’s Planet Money throws all the wigs and capes into one pretty interactive for readers. 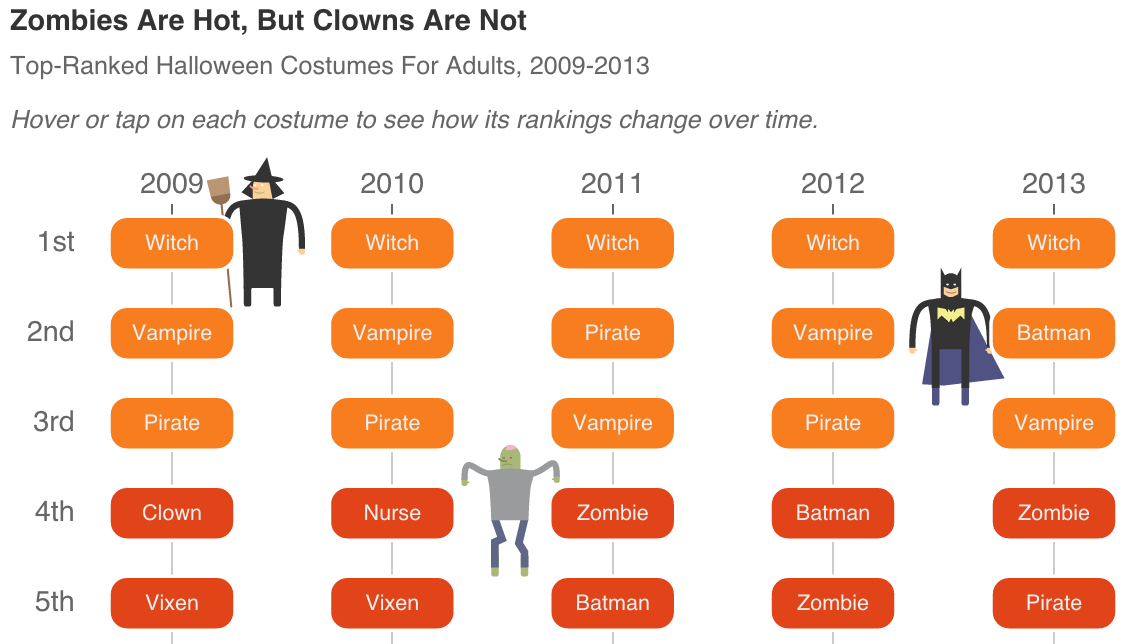 Tube tongues: I always thought that I grew up in one of the most multicultural places on Earth, but Oliver O’Brien, a researcher at University College London’s Department of Geography, has offered me some persuasive data. His interactive map shows the second-most spoken language after English at each stop on London’s underground system. At one stop (Turnpike Lane on the Piccadilly Line), no less than 16 languages are spoken by Londoners living in the surrounding area. 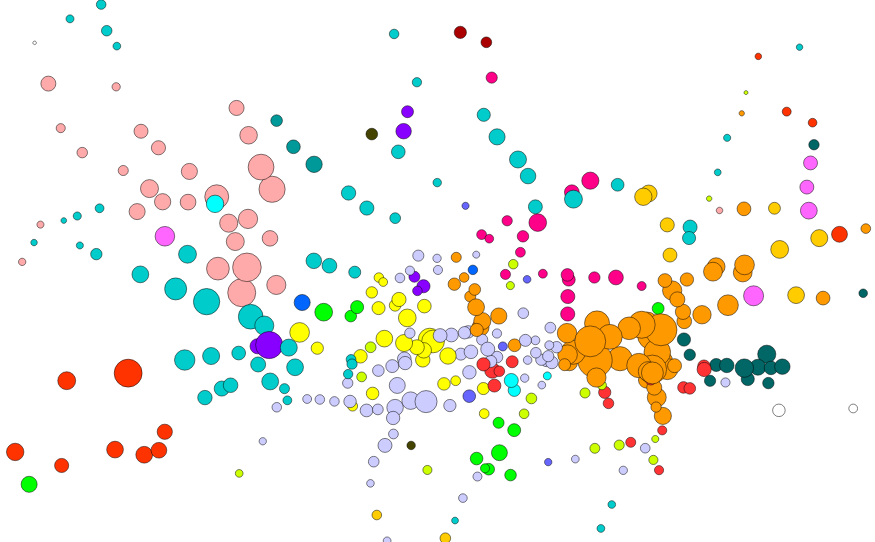 More calories: This simple interactive from the National Geographic shows how the composition of our diets (i.e. calories from grain, meat, sugar, dairy, etc.) varies from country to country. It also shows how calorie consumption has changed over the past 50 years.