Monday featured a reasonably good set of polls for Republicans. A Louisiana poll from Suffolk University put Democratic Sen. Mary Landrieu 7 percentage points behind Republican Bill Cassidy in a potential runoff. A Rasmussen Reports poll of Colorado gave Republican Cory Gardner a 51-45 lead over Democratic Sen. Mark Udall. A SurveyUSA poll of North Carolina had Republican Thom Tillis drawing into a tie with Democratic Sen. Kay Hagan, although it was offset somewhat by a Monmouth University poll that had Hagan with a 2-point lead.

Republican chances of winning the Senate are 65 percent according to our latest forecast, slightly improved from Sunday.

But we’ve talked plenty about races like Colorado. So let’s try something a little different: Consider those races that looked as though they could have been competitive, but have turned out not to be. Below is a chart comparing the back-of-the-envelope forecast we ran in March against our algorithmic one from Monday. 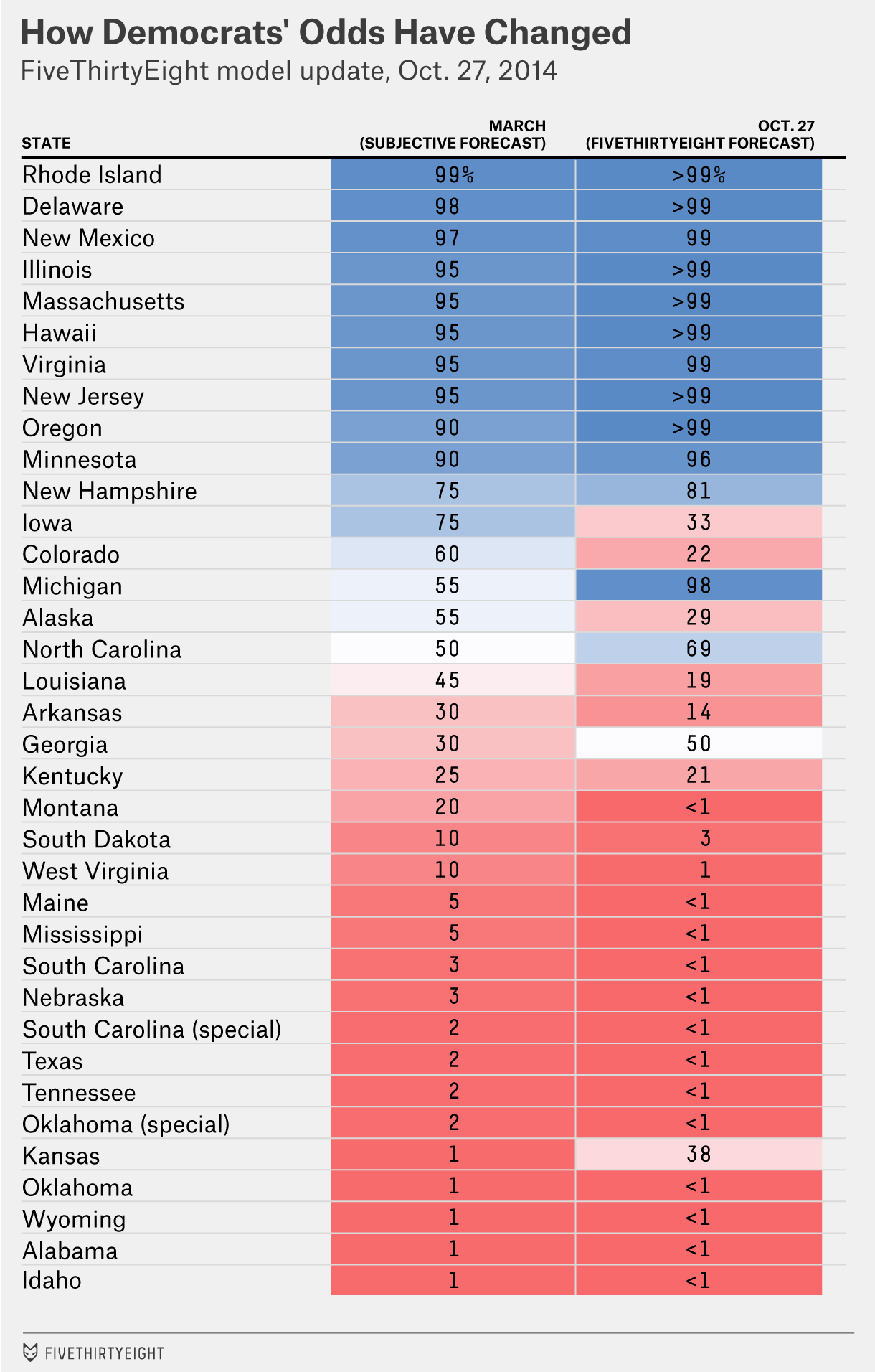 The forecasts are quite similar overall — the correlation is .93 — but the few exceptions really stand out. Relative to March, the Democrats have gained ground in Kansas, Georgia, Michigan and North Carolina. Democrats have lost ground in Alaska, Arkansas, Colorado, Iowa and Louisiana.

Kansas and Michigan are the most striking cases. In March, we’d given Republicans almost no chance of losing their seat in Kansas. Now, we give independent Greg Orman a 51 percent chance of beating Republican Sen. Pat Roberts, and a 75 percent chance of caucusing with Democrats if he does, meaning that Democrats’ chances of capturing the seat are about 37 percent overall.

Our March forecast in Kansas is going to look really dumb if Democrats win the seat. But between 2014 and earlier years like 2010 and 2012, there have been several dozen races where our very early back-of-the-envelope estimates gave the trailing party only between a 1 percent and a 5 percent chance of winning. Given so many attempts, sooner or later one of those long shots is bound to come through, like when a No. 15 seed beats a No. 2 seed in the NCAA tournament. It’s a great story when it happens and a reminder for pundits and analysts to stay humble.

Michigan, however, has moved in the opposite direction: from a very competitive race in March to one that Democrat Gary Peters looks almost certain to win.

In March, we characterized Terri Lynn Land as a good candidate based on the statistical measures we evaluate. She’d raised a lot of money; she’d been elected to statewide office (as Michigan’s secretary of state). Statistical assessments of her ideology suggested she wasn’t too far to the right to get elected in Michigan. And voters seemed to agree: Land led Peters in most polls of the race from January through March.

These measures are often quite “smart” about identifying strong and weak candidates. They had no trouble detecting the flaws with, for example, Todd Akin in Missouri in 2012, or Christine O’Donnell in Delaware in 2010. Both candidates raised relatively little money; both were far to the right of the voters in their states. O’Donnell had never been elected to anything. Land had none of those problems.

But Land is almost certain to lose, quite possibly by double digits. When a race goes as badly as Michigan has for Republicans, there’s the temptation to say that the candidate was awful all along. Should analysts have seen Land’s demise coming before the polls did?

This was the subject of some debate on Twitter on Monday. My view is that it would have been hard. It wasn’t just FiveThirtyEight that gave Land decent chances; the best people I know at assessing “intangible” qualities of candidates are groups like the Cook Political Report, which also had the race as a tossup in March. Instead, this looks like a case of hindsight bias. Still, give a pat on the back to anyone who was skeptical of Land’s chances to begin with.

Are there any other races that have fallen out of competitive status since March? Actually, only a few borderline cases:

Democrats also never made a race out of Maine, despite reasonably good fundraising totals for their candidate, Shenna Bellows. Republicans have never come especially close in Virginia or New Jersey. But those were races that never looked close to begin with, or at least in our March assessment.

Instead, it’s remarkable how many races have remained competitive. In 10 states, each party still has at least a 10 percent chance of winning in our forecast — higher than the six or seven such cases at this point in 2010 and 2012.

Michigan is the exception. Still, it’s an important part of the story of the 2014 election. (If it were still a tossup now, Republican chances of winning the Senate would be closer to 75 percent than 65 percent). Some races are won on Election Day; some are lost beforehand. 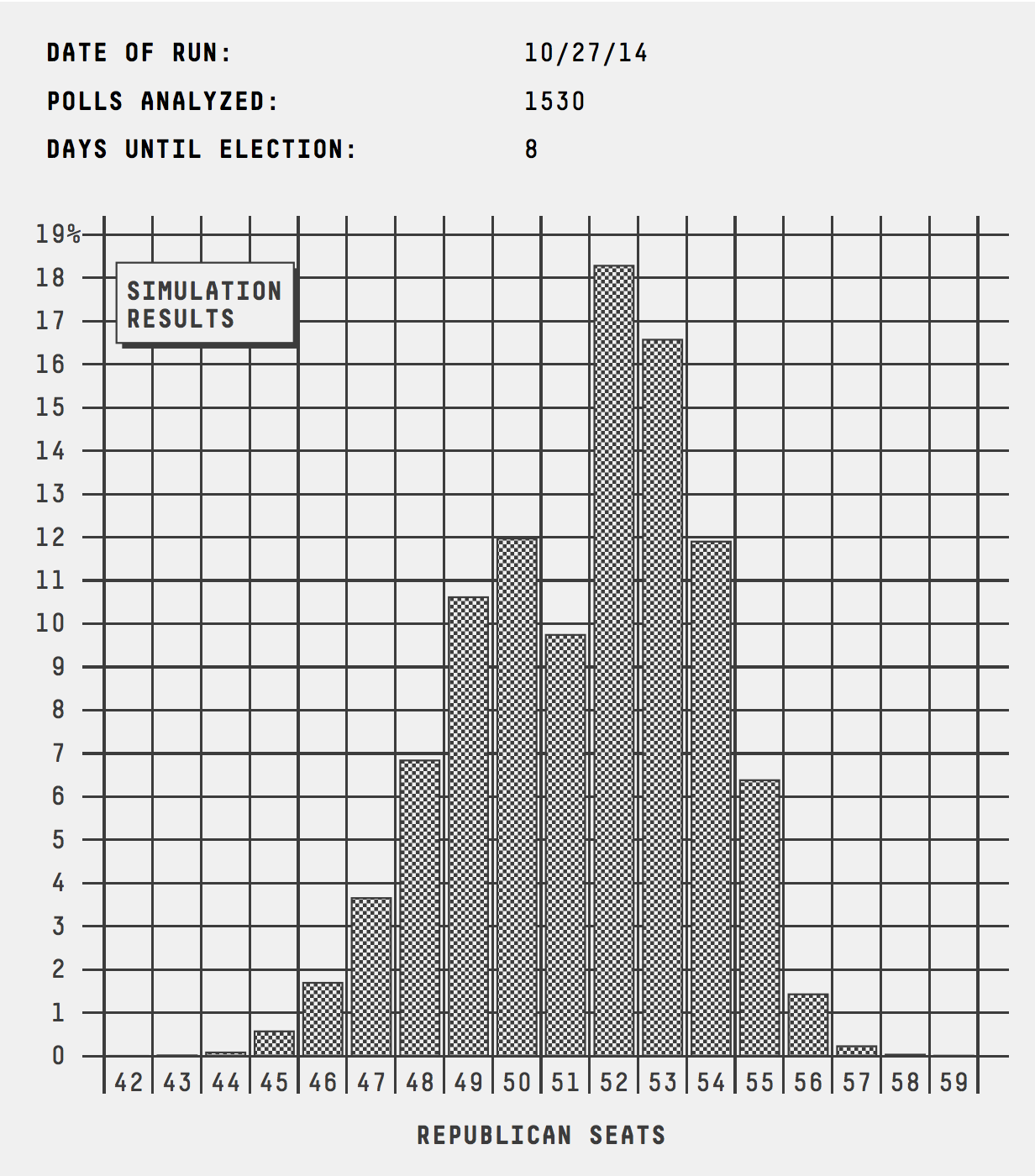