Democrats now project to hold an average of 54.0 seats when the Senate convenes in January, 2011, according to our latest forecast, and Republicans 46.0. This reflects a roughly one-seat improvement for Republicans since our previous forecast on March 10th.

Republicans now have about a 10 percent chance of taking an outright majority of Senate seats, according to the model, up slightly from before — and about an 18 percent chance of getting to at least a tie. Democrats still have about an 8 percent chance, on the other hand, of recovering a 60-seat majority — although obviously this would require a substantial shift in the national political environment. None of our analysis directly reflects any potential impact from the Democrats’ passage of their health care bill. 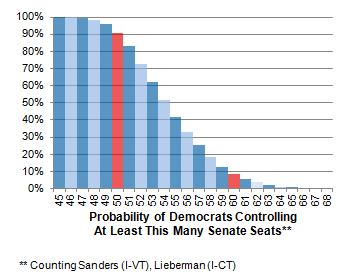 The slight gains the Republicans have made have both general and specific causes. On the one hand, whereas two weeks ago it appeared as though there might have been a slight bounceback in the Democrats’ polling, it looks flat instead now (although it is probably not still declining across the board.) Because our model incorporates a “trendline adjustment”, it will be sensitive to these subtle movements. Meanwhile, the Republicans have made specific gains in California, where the vaunted Field Poll now shows the two leading Republican candidates in highly competitive races against Barbara Boxer, and Wisconsin, where Tommy Thompson has had a couple of good polls and seems to have become more interested in a potential race against Russ Feingold. There are few states, on the other hand, where Democrats’ fortunes have tangibly improved over the last two weeks; Colorado, where Jane Norton has proven to be unappealing to some voters and where Republicans might not nominate her anyway, is probably the closest.

One word of warning: this is a forecast based on purely objective evidence. Subjectively, I think the model probably overstates the likelihood of a Republican takeover in Wisconsin (because of Tommy Thompson’s lobbying problems) and understates it in Illinois (because of Alexi Giannoulias’s banking problems).

Detailed results are below.