You might be hearing that Democrats or Republicans have “momentum” heading into the final week of the 2014 campaign. On Tuesday, for example, a Washington Post headline asserted “Midterm momentum belongs to GOP.” That was based on a generic ballot poll showing a 6 percentage point Republican lead. But later in the day, a Fox News generic ballot poll came out showing Democrats up by 1 point instead — Fox had previously shown Republicans ahead.

This pattern — or rather, this lack of a pattern — has been typical throughout this election cycle. Whenever one party seems to be gaining an advantage, the other party has countered it with some good news of their own.

Republicans have maintained a narrow overall edge in their quest for a Senate majority, but the magnitude of their advantage hasn’t changed much throughout the campaign. When the FiveThirtyEight model launched Sept. 2, it gave Republicans a 64 percent chance of winning Senate control. In our latest forecast, their chances are 62 percent. They’ve never been higher than 66 percent or lower than 53 percent.

We’ve critiqued the media’s use of the term “momentum” before. It’s one of those clichés that’s easy to misapply.

In many elections — unlike this one — the polls have consistently drifted toward one party for some extended period of time. There was a sharp break toward Democrats in Senate polls throughout September and early October 2012, for example.

Even in these cases, however, the m-word should be applied carefully. When used in a more technical sense, momentum implies positive serial correlation. What the heck does that mean? It means you’re predicting the trend will continue in the same direction. If you say that the Dow Jones Industrial Average has “momentum” because it has risen from 16,000 to 17,000 points, you’re suggesting it will continue to go up.

The stock market doesn’t behave like this; it’s much closer to being a random walk, meaning it’s equally likely to go up or down on any given day. Nor does it matter in which direction the movement has been in the past. If the stock market rises from 16,000 to 17,000 points, it’s roughly as likely to revert back to 16,000 as to continue rising to 18,000.

For the most part, polling is the same way. There are some exceptions to this (see our previous discussion of this subject here), mostly involving primary elections and cases where the polling is out of step with the “fundamentals” of the race. But to a first approximation, you should assume there isn’t any momentum in the polls.

Take a look at how the FiveThirtyEight forecast has changed in competitive Senate races since it was launched on Sept. 2. In the table below, we’ve listed the chance FiveThirtyEight gave the Republican candidate of winning each state on Sept. 2, and then at successive two-week intervals through Tuesday. 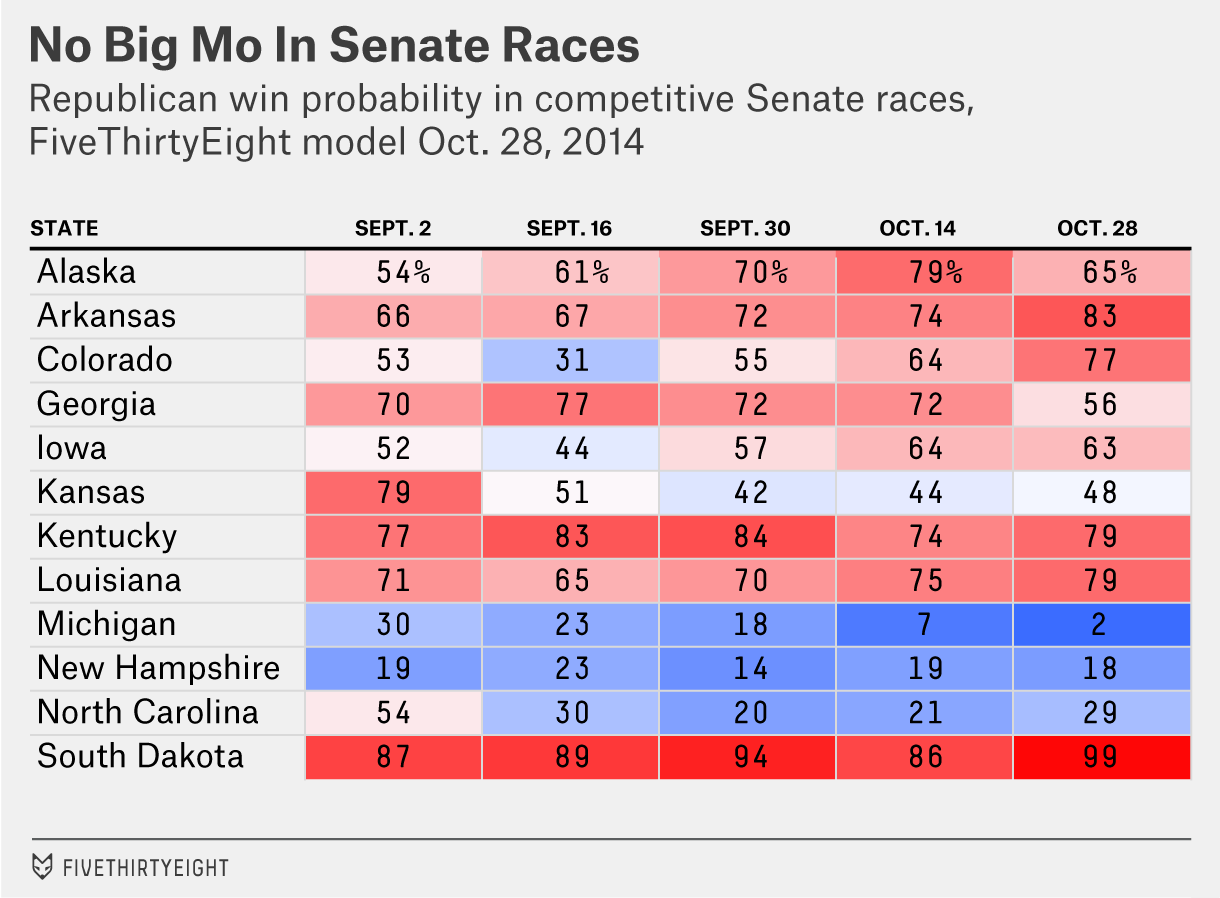 There simply hasn’t been any correlation from one period to the next. From Sept. 2 to Sept. 16, for instance, the Republican candidate gained ground in six states, and the Democratic candidate gained ground in six states. But in the next period (from Sept. 16 to Sept. 30), the movement continued in the same direction in only seven of the 12 states.

True, there has been consistent movement in some races. Michigan has very clearly moved away from Republican Terri Lynn Land to Democrat Gary Peters. Arkansas has slowly but surely gone into the red column, and Republican Tom Cotton is a clear favorite there now. But those are the only two races where one candidate has gained in every two-week period.

Other races have seen reversals of “momentum.” Republican Cory Gardner saw a number of unfavorable polls from Sept. 2 to Sept. 16. His chance of winning dropped from 53 percent to just 31 percent. Since that point, he’s gone on a tear and gained in each of the last three two-week periods. He’s now a 77 percent favorite.

Other races have seen head fakes. Republican candidate Mike Rounds, initially presumed to be a shoo-in, briefly looked vulnerable in South Dakota — but he now looks almost completely safe on the basis of a series of new polls.

And none of this takes into account the movement within each two-week period. On Oct. 23, Republican David Perdue’s chance of winning in Georgia dropped to just 46 percent. Over the past five days, he has snuck back up to a 56 percent chance of winning.

To get technical for a moment: It’s important to minimize serial correlation when designing a forecasting model. Low serial correlation is a sign a model is incorporating the available information efficiently and weighing it properly. Poor forecasts — like the estimates of default risks put out by the credit ratings agencies — often fail this test.

In the case of a polling model, you might wind up with positive serial correlation if you’re too slow to discard older polls (the model will be too sluggish in recognizing genuine shifts in public opinion). And you can wind up with negative serial correlation if you throw them out too quickly (the model will fall for a lot of head fakes). A lot of what looks like momentum in the polls is really just random noise. 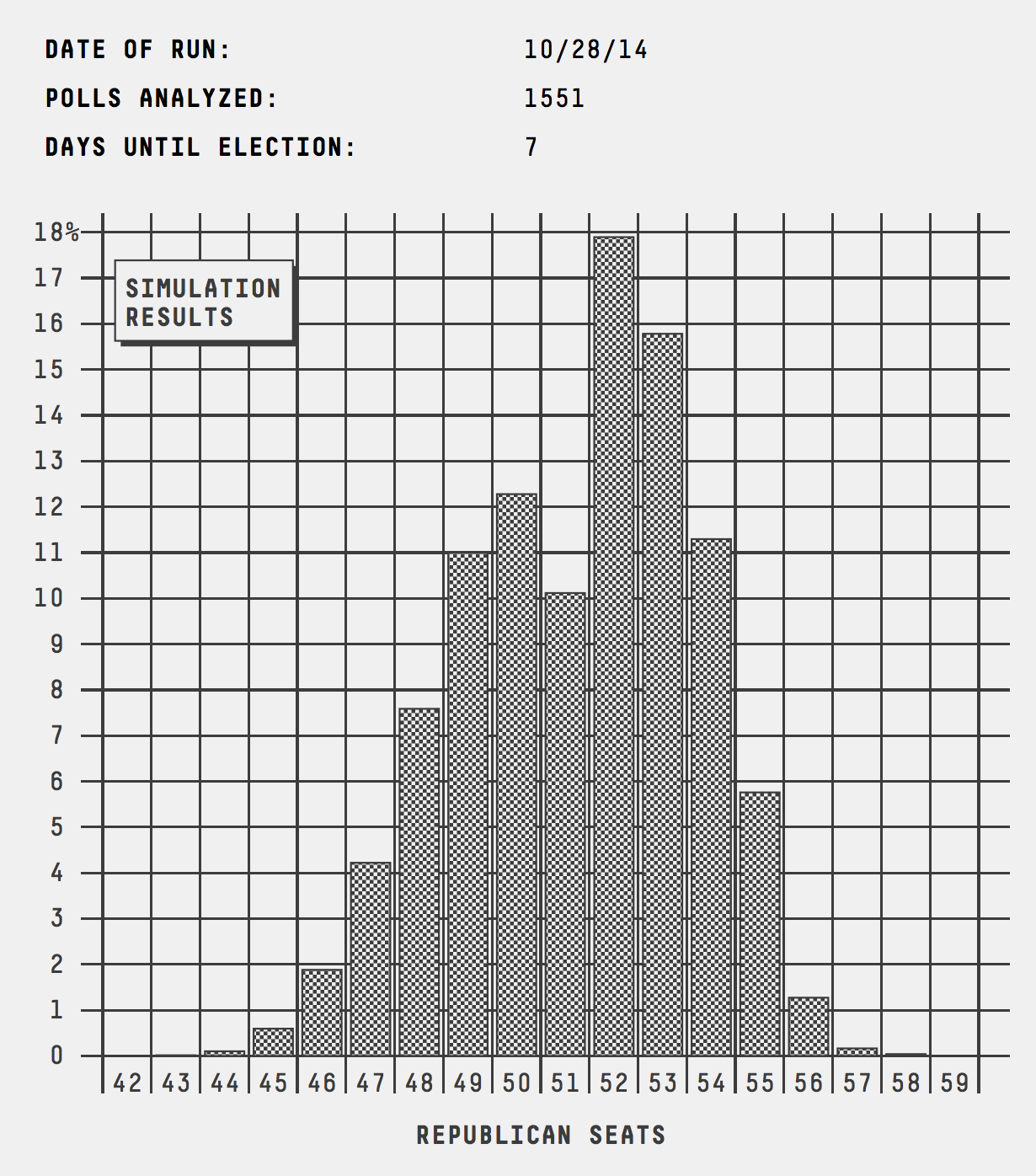