Glass half-full statistics: Wages might be increasing for American workers but, as David Leonhardt explains in the New York Times, because they’ve crawled upwards at such a slow rate, the typical American family was better off 15 years ago. 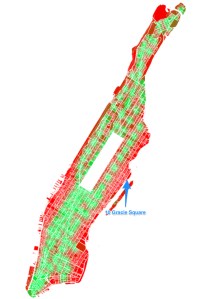 : Ben Wellington is a Professor in the City & Regional Planning program at the Pratt Institute in Brooklyn. In his spare time, Wellington enjoys using data to discover more about the city — he’s analyzed the distribution of Starbucks shops, the best places to swim (by presence of fecal matter of course) and mapped the city’s top food trucks. Now though, like pretty much every New Yorker, he’s turned his obsession towards real estate. By comparing data on the location of each MTA Subway Station Entrance to the center of each building in Manhattan, he was able to figure out which residential building is the farthest from public transport. The answer is located at the end of 84th street at the FDR Drive: 10 Gracie Square is 0.8 miles to the nearest subway. Perhaps residents have the means to skip the subway though — its listing on Street Easy is currently being advertised for $18.9m.

25.4 minutes from door to door: Wellington was not the only person reflecting on commuting this week. Journalists at WNYC used census data to map the average time it takes to travel to work in every zip code in the United States and see how it deviates from the national average of 25.4 minutes. The interactive allows you to search by location and (for the quants among you) download the data as a .csv file. Out of curiosity, I did. The longest work commute in the country is 109.2 minutes, and it belongs to the people of Normantown, West Virginia (although that number has a surprisingly high 55 minute margin of error — so it could really be anywhere between 54.2 minutes and 164.2 minutes). The shortest commute: 1.2 minutes to get to work from Liguori, Missouri (with a 3.8 minute margin of error).

The Americans who get to decide which party rules the senate: This interactive from Keith Collins and Greg Giroux at Bloomberg is an elegant piece of storytelling. They start off by showing the distribution of America’s 319 million population, then gradually narrow that number down by Americans of voting age, Americans who actually head to the ballots, Americans who live in states with Senate elections and Americans who live in states where it’s a close race. In seven clicks, the journalists demonstrate how a small fraction of America — just 11 million people or so — will decide the close races that will determine which party controls the Senate. 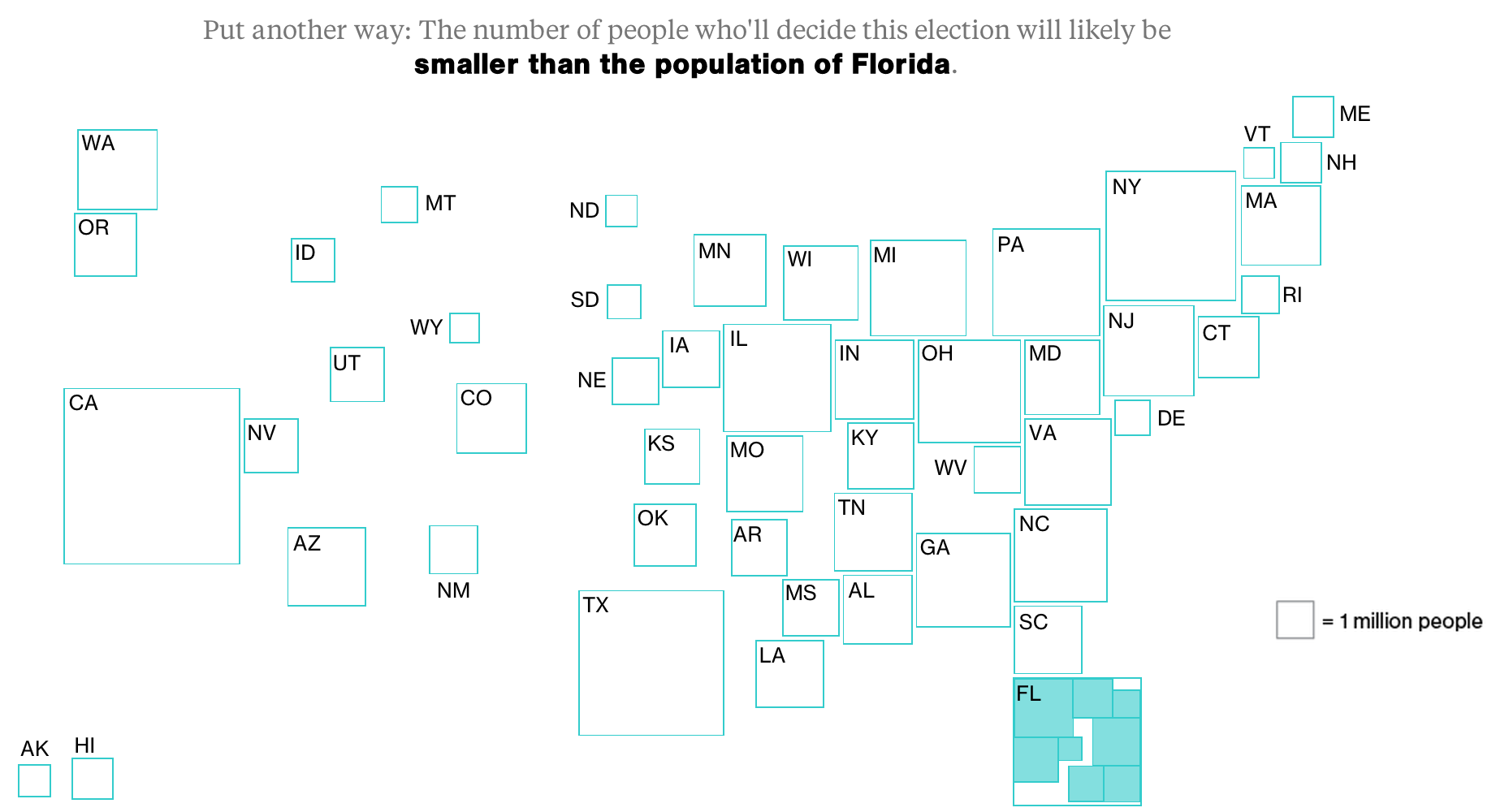 College loans: Last month, the U.S. Department of Education released data showing that 13.7 percent of students default on federal loans, down from 14.7 percent the same time last year. Zach Wener-Fligner at Quartz wanted to figure out which students are doing the defaulting so he sliced the data by college. Large public schools had the highest three-year default rates — such as New Mexico State University where 1 of every 5 students defaulted compared to just 1 in every 100 students at Yale. 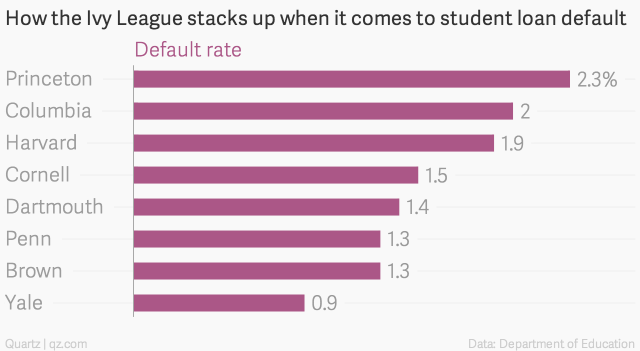 Slow but deadly: There’s been such an abundance of information about the recent Ebola outbreak that it’s hard to see where articles can add real value rather than simply contributing to a sense of panic. This interactive from Bonnie Berkowitz and Lazaro Gamio at the Washington Post does however manage to add perspective by comparing Ebola to other infectious diseases like smallpox. The simulation shows 1 individual infected on day 1. Press play and it’s clear that Ebola spreads much slower than flu, chicken pox or measles but by day 78, the disease has claimed far more lives. 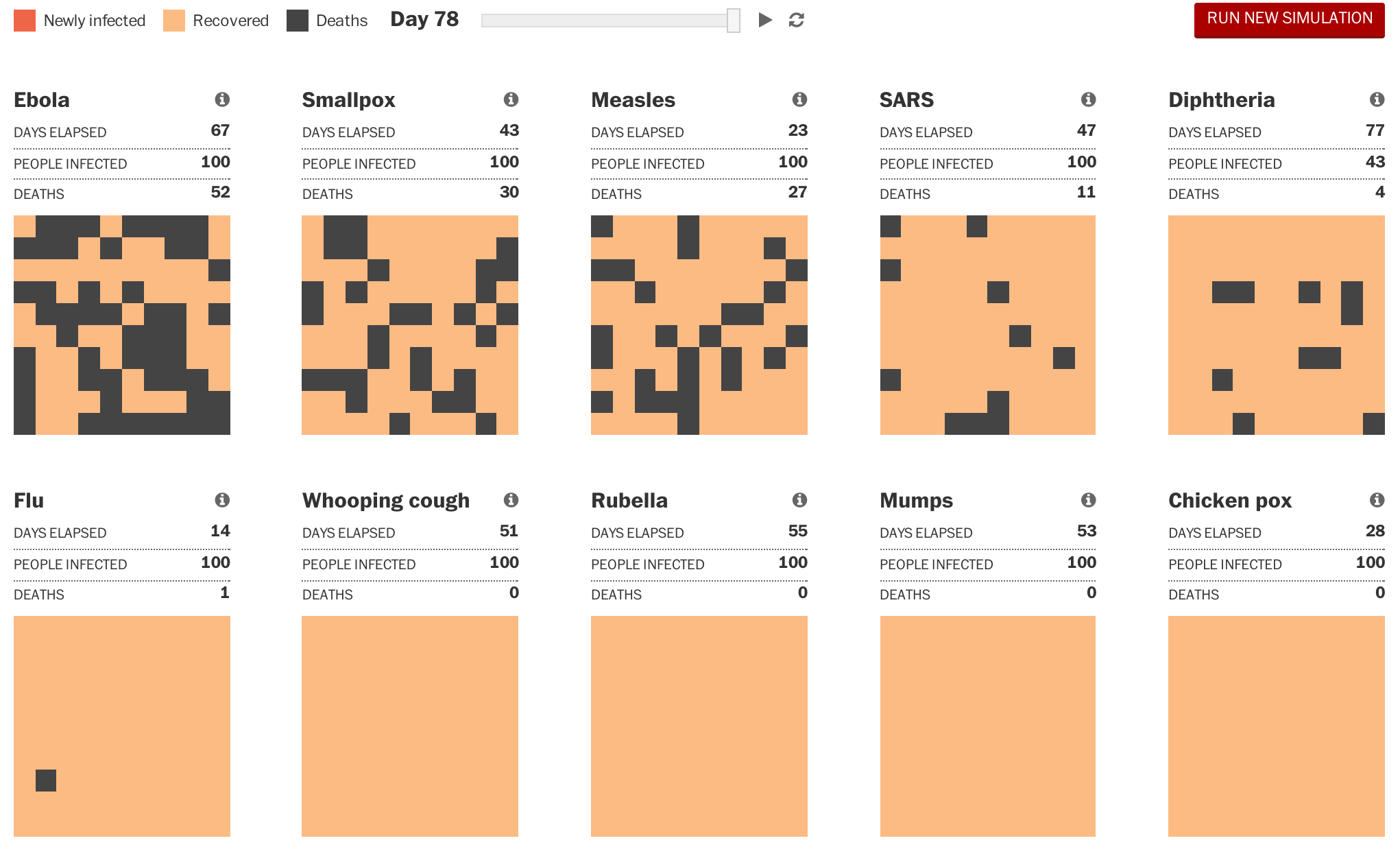 Gay couples on the front page: After Monday’s Supreme Court decision, same-sex marriage became legal for the majority of Americans. However Tuesday’s newspapers didn’t quite reflect those facts for the majority of American same-sex couples. Scanning newsstands the next day, David Ingold at Bloomberg totted up 29 front pages with photos of lesbians marrying, three with gay men and just three newspapers that had images of both male and female same-sex marriages.

Back to 1 A.D.: The International Monetary Fund has ranked China as the world’s biggest economy for the first time, but if you take a longer view, there’s nothing new about Chinese economic prowess. The Economist produced a simple chart showing which countries have been the three biggest economies (in terms of their share of the world’s total GDP) over the past 2014 years.