I wonder if you would consider doing some research on marriage success rates for those who did and did not live together before tying the knot. There has been lots of work over the years, but some of it is certainly tainted with a desired outcome.

The short answer to your question is that couples who live together before getting married are more likely to end up going their separate ways. But the longer (and, more importantly, the more accurate) answer is that cohabiting before marriage probably doesn’t cause break-ups — but it might be a good indicator of other factors that do.

For a long time, researchers couldn’t see past that short answer. The numbers are, after all, pretty compelling: 57 percent of men are still husbands 20 years after their first marriage. If they lived with their partner before getting married, those chances fall to 49 percent. If they didn’t, the marriage survival rate rises to 60 percent. And the numbers aren’t much different for women.

Those numbers come from the Centers for Disease Control and Prevention (CDC), which uses the National Survey of Family Growth to calculate the fraction of marriages that survive. Between 2006 and 2010, the NSFG interviewed a national sample of 22,682 U.S. men and women ages 15 to 44 about all kinds of aspects of family life. Because those interviews are so detailed, the survey can help get a better answer to your question.

For one thing, cohabiting before marriage isn’t sliced up as neatly as “did” and “didn’t.” There are three groups in the survey results: “cohabited and engaged,” “cohabited but not engaged” and “did not cohabit.” As it turns out, if living together isn’t a great idea for wannabe spouses, neither is moving in with someone for the first time without an engagement ring: For both men and women, marriage survival rates are lower for those who weren’t engaged before moving in together. 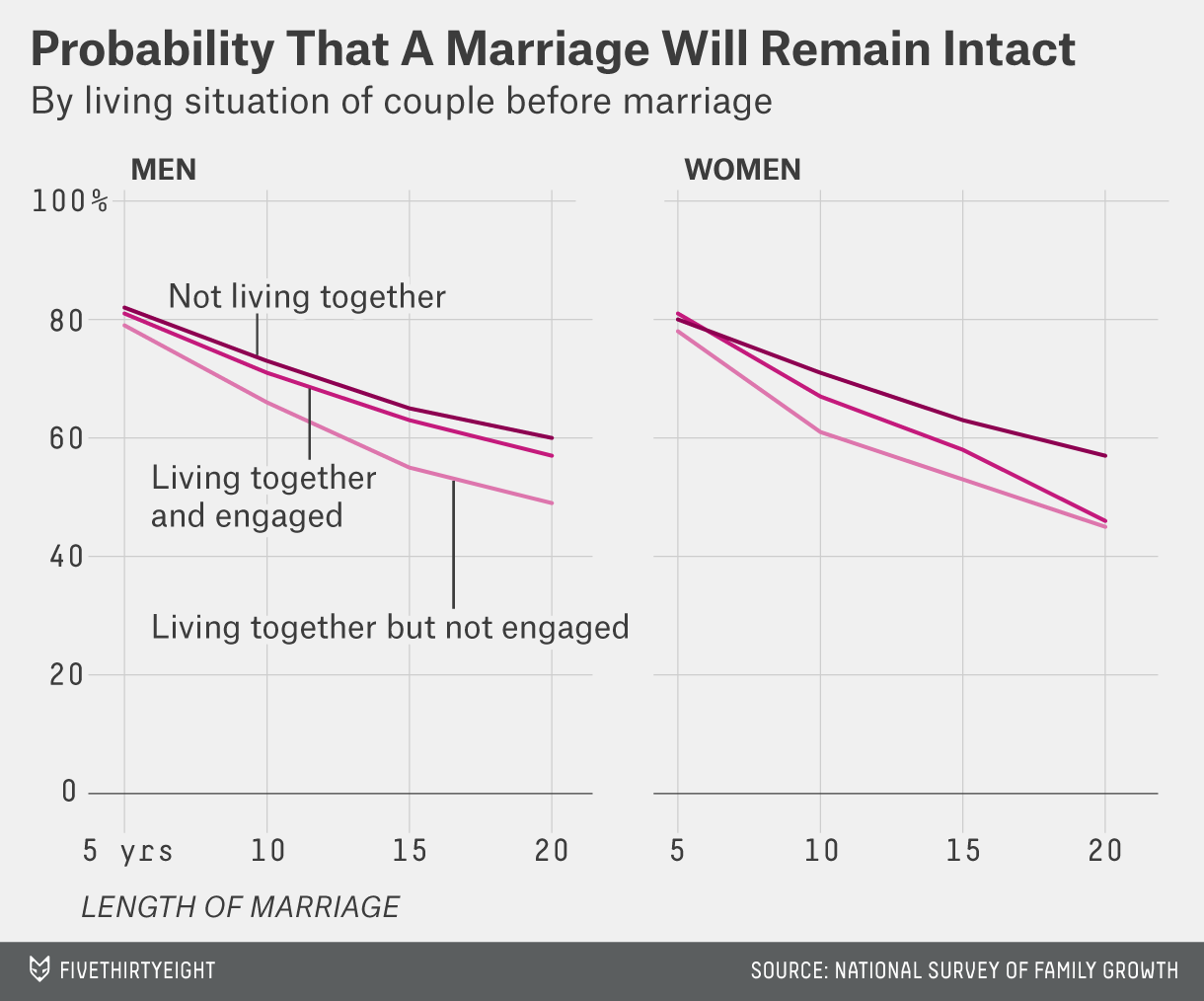 Clearly then, there are other factors here, but you’re not the only one to focus on living together. That’s understandable, though, because unlike engagement, cohabitation is relatively new to American life. In 1960, there were about 439,000 unmarried cohabiting couples in the U.S. By 2013, that figure had reached 8.1 million — nowadays, half of all Americans have lived with a partner outside of marriage at some point in their lives. (Apparently Americans are undeterred by the fact that laws against “living in sin” are technically still in place in Florida, Michigan and Mississippi.)

Researchers, grappling to understand the consequences of such a rapid shift in the makeup of American households, and with few other statistics at their disposal, might be tempted to go for the simple “↑ cohabitation = ↑ divorce” explanation. But that’s not only a simplistic way to view the cause of American divorces, it’s also a simplistic way to view the overall life cycle of relationships. Not everyone believes that living together is a precursor to marriage — a quarter of adults who are cohabiting say they don’t think they’ll marry their partners, according to a 2010 Pew Research Center survey.

More frustratingly, this data also only reflects the lives of some Americans. The Census Bureau only recently began asking questions about same-sex cohabitors. There just isn’t enough data to know what happens to those couples over time, let alone the divorce rates of those who marry.

Where does that leave us? Well, the data does show us that cohabiting couples are less likely to stay together once married, but there’s a bigger question we need to address: Is it cohabitation that causes those marriages to break up?

That’s a question Arielle Kuperberg, now an assistant professor of sociology at the University of North Carolina at Greensboro, asked herself while writing her dissertation (and cohabiting herself at the time). Faced with research showing that married couples who have lived together are less likely to stay married, Kuperberg wanted to understand whether there were other factors at play.

Using the same NSFG data, she noticed that people who live together do so at a younger age than couples who get married first. Once we control for age between the two groups, cohabiting has barely any effect on the chances of a marriage ending in divorce.

Age matters, Kuperberg explained in a recent phone interview, because “people change a lot in their early 20s — suddenly you decide you do want to have kids but your partner doesn’t, or you want to have a job on the other side of the country and your partner doesn’t. Cohabitors are forming those relationships earlier and if they’re eventually marrying, they’re less prepared for those changes.”

And it’s not just age. Kuperberg noted that cohabitors tend to be different in lots of ways from those who get married first: They tend to have lower levels of education, and they’re more likely to have parents who are divorced and to be less religious — all factors that correlate with divorce.

Like Kuperberg, Sharon Sassler, a professor at Cornell University, has attempted to add some nuance to the equation “↑ cohabitation = ↑ divorce.” Sassler’s work has focused on how long a couple has been together and social class — all of which basically leads to the conclusion that what matters is who’s doing the cohabiting.

The list of those other possible explanations is a long one. In 2002, the CDC tested 17 characteristics to see whether they correlated with the chances of a first marriage ending in a separation or divorce. It found a “significant” statistical match for 15 of those characteristics:

There are clearly differences in the types of Americans who cohabit before marrying and those who head down the aisle first. Sure, couples who cohabit and decide to eventually marry might have a lower chance of still being together 20 years later. But then again, it might not be the cohabiting that leads to the ink on the divorce papers.

CLARIFICATION (Oct. 13, 11:02 a.m.): This article has been updated to indicate that Arielle Kuperberg teaches at the University of North Carolina’s Greensboro campus.