Estimating the number of gay, lesbian and bisexual people in the U.S. has always been challenging. Sexual identity can be fluid. What people do in their private lives may not match what they tell pollsters. And categories relating to gender identity are sometimes lumped together with those that describe sexual orientation.

In recent years, however, there has been a new and potentially reliable1 source of data from the Census Bureau. The decennial census, and the ongoing American Community Survey (ACS), now ask detailed questions about the relationships between adults living in the same household, including categories for both unmarried and married same-sex partners.2

Combining the new Census data with other polling data, I wanted to see what percentage of gays and lesbians live together as partners, and whether this percentage varies substantially from state to state.

In 2012, Gallup published data on the percentage of adults who identify themselves as lesbian, gay, bisexual or transgender (LGBT) in each state. It found that about 3.5 percent of Americans do, with a range from 1.7 percent in North Dakota to 5.1 percent in Hawaii (and 10.0 percent in the District of Columbia). That would imply there are about 8.5 million LGBT adults in the United States — roughly the same as the population of Virginia or New Jersey.

But the rates of same-sex household formation are a little higher in states that are more tolerant toward gays and lesbians. In the six states (and the District of Columbia) that permitted gay marriage as of Jan. 1, 2012, 17.6 percent of LGBT adults lived in same-sex domestic households. By comparison, 15.3 percent did in states that recognized domestic partnerships (but not gay marriage), and 14.4 percent in those that allowed neither option.

Alternatively, we can measure tolerance for gays and lesbians as a function of the estimated public support for gay marriage in each state (based on polling and demographic data), as opposed to whether the states actually had gay marriage in place by 2012. 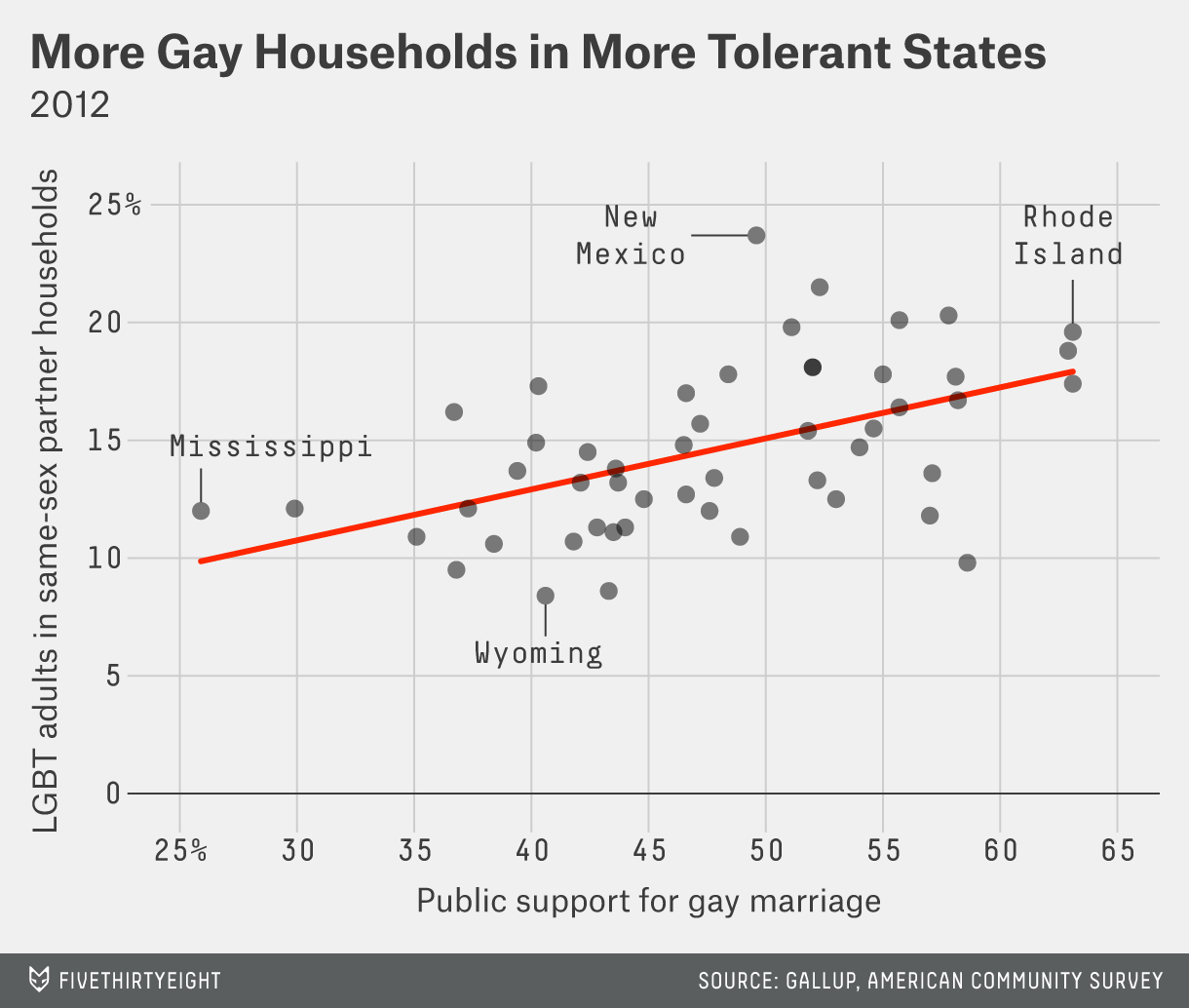 This relationship is somewhat noisy3 but nevertheless highly statistically significant. The regression line in the chart implies that, in a state where 30 percent of the adult population supports gay marriage, about 11 percent of LGBT adults will live together as couples. By comparison, in a state where support for gay marriage is 60 percent, 17 percent will.

These results probably should not be surprising: forming a household with a same-sex partner is a fairly visible and public act, if not quite as public as marriage. By comparison, disclosing one’s LGBT identity to a pollster in an anonymous survey is more private and might depend less on perceived support from one’s community. There are also some LGBT Americans who are so closeted that they won’t tell pollsters about it. Google’s Seth Stephens-Davidowitz recently found that searches for gay male pornography (the link is safe for work) occur at about the same rate in each state regardless of how publicly tolerant it is.

A more complicated task is figuring out what is responsible for increased household formation among LGBT adults. Is it the institutions of gay marriage and domestic partnership themselves or a greater societal tolerance for gays and lesbians? It’s a challenging question because whether a state permitted gay marriage and what percentage of the population favored it were of course strongly related to one another, especially prior to last year’s Supreme Court decision in United States v. Windsor, which ruled that a ban on federal benefits for same-sex couples was unconstitutional.

One approach is to run a regression analysis that estimates same-sex household formation as a function of both its public support for gay marriage and its legal status as of 2012. This regression finds that public support remains a statistically significant predictor of household formation while the legal status of gay marriage is not. However, this result may not be all that meaningful. One problem is that gay marriage is a relatively new institution (and it was even newer as of 2012) and is only starting to affect how LGBT Americans live their lives. Another is that regression estimates can be unreliable when explanatory variables are highly correlated with one another, as they are in this case.

In that sense, the Windsor decision, which has triggered court decisions to permit gay marriage in states ranging from Arkansas to Idaho, could be a boon to social scientists as well as to gay couples. (In a number of states, including Idaho, these decisions are on hold.) These decisions appear to be happening in states fairly randomly, instead of being highly correlated with public opinion. That creates a randomized trial of sorts. If, say, Idaho permits gay marriage while its neighbor Wyoming does not for several years, we might learn a lot more about whether the availability of same-sex marriage increases same-sex household formation.

Or it could be that the Supreme Court soon finds an explicit constitutional requirement for same-sex marriage in all 50 states. Will household formation among same-sex couples come close to resembling that for heterosexual couples 10, 20 or 30 years from now?

I have no idea. For right now, same-sex couples are more likely to form households when they enjoy high social status. As of 2012, 41 percent of same-sex households had a joint income of at least $100,000, compared to 33 percent of opposite-sex households. They were also considerably more likely to be non-Hispanic white, and have high levels of educational attainment. The biggest opportunity for gains is among Americans who may feel marginalized not only because they are gay or lesbian, but for other reasons as well.