A dangerous industry, but especially if you’re Latino: Using data from the Bureau of Labor Statistics, Buzzfeed’s David Noriega noted that the fatality rate for Latino construction workers has risen by more than 20 percent since 2010 (up to 231 deaths in 2013 from 181 in 2010), but for non-Latino construction workers it has fallen by 5 percent (to 565 from 593). In speaking to several legal experts and advocates about the numbers, Noriega heard a recurring explanation for the trend: Latino workers are often immigrants, sometimes undocumented, working in non-union jobs for small contractors that are less likely to be regulated. The article also gives voice to the numbers by recounting the story of Delfino Jesús Velázquez, a Staten Island construction worker who died this past November in an accident at work. 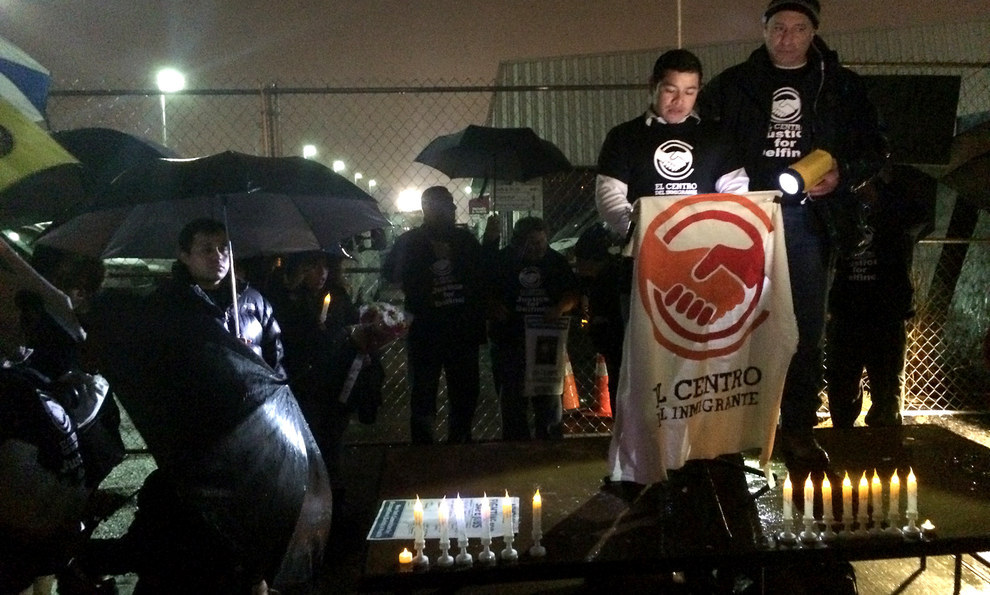 66 times more likely to be a lawyer: This chart from the Economist takes a while to understand, but the information it contains about representation (or lack thereof) is powerful. It uses data about the average member of American society and compares it to the average member of the 114th Congress to show how politicians are unlike the rest of us. Regardless of the party they’re from or which chamber they sit in, members of Congress are far more likely than the average American to be over 65, military veterans or have a law degree. 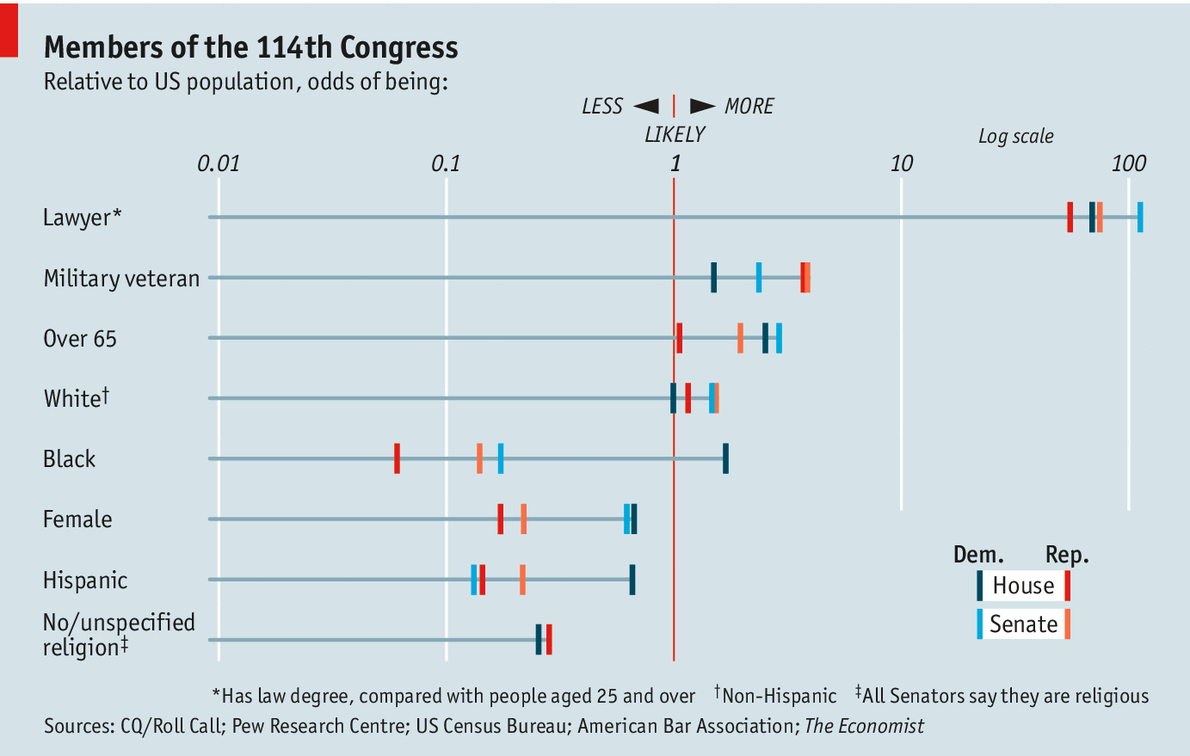 American poverty in global perspective: Jordan Weissman starts this story in Slate with one simple question: How poor are America’s poor, really? He sets out to answer it by comparing low-income Americans to others in wealthy countries using data from a European research center, LIS. He found that in per capita terms, the income of the poorest 5 percent of Americans is less than the income of the poorest 5 percent of Australians, British, French, Irish, Canadians, Belgians, Germans, Finnish, Swedish, Austrians, Dutch, Swiss, Danish and Norwegians. However, the United States moves up the rankings when you loosen the definition of poverty to be the poorest 10, 20, 30 or 40 percent of the country.

Women workers: This beautiful interactive map from Gregor Aisch, Josh Katz and David Leonhardt at The New York Times plots where in the U.S. women have jobs. You can focus in on specific parts of the country and compare female employment rates to those for men — as the example below does for Utah. While female employment rates have risen in most rich countries, they have fallen 5 percentage points since 2000 in the United States. 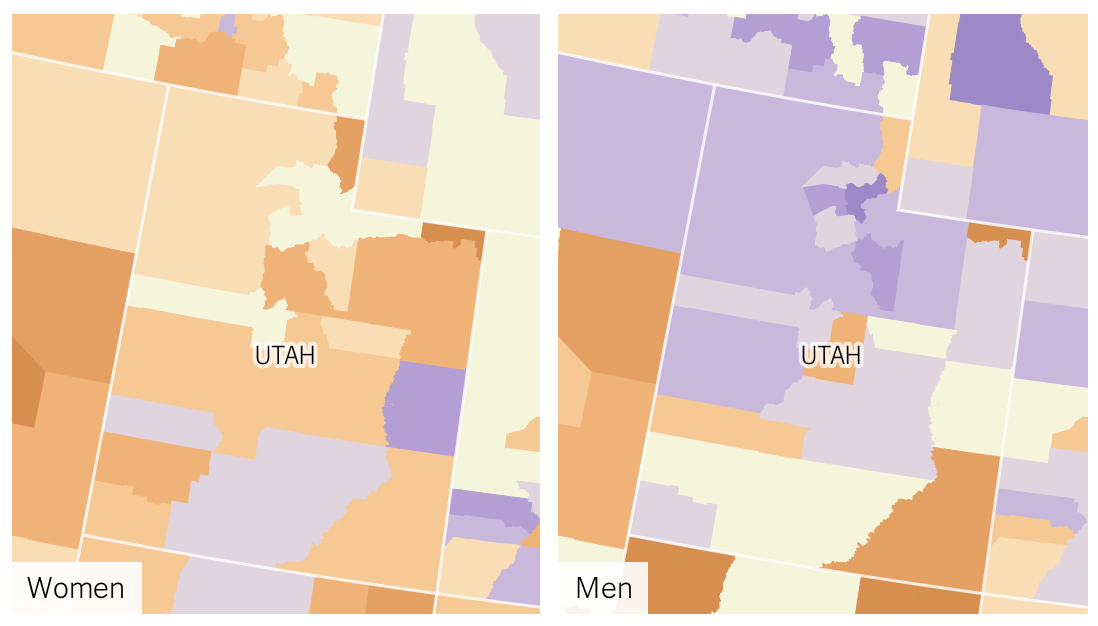 Who is most likely to have a ring on (then take it off): Dentists and chief executives were the people most likely to be married in 2010; in the 1950s, it was power plant operators and farm product buyers. The data, which Dorothy Gambrell at Businessweek analyzed, comes from the U.S. Census Bureau and shows that divorce by profession has also changed. In 1950, artists were the most likely profession to be divorced, but six decades later, it’s postal clerks and mail handlers who most often part ways with their husbands and wives. 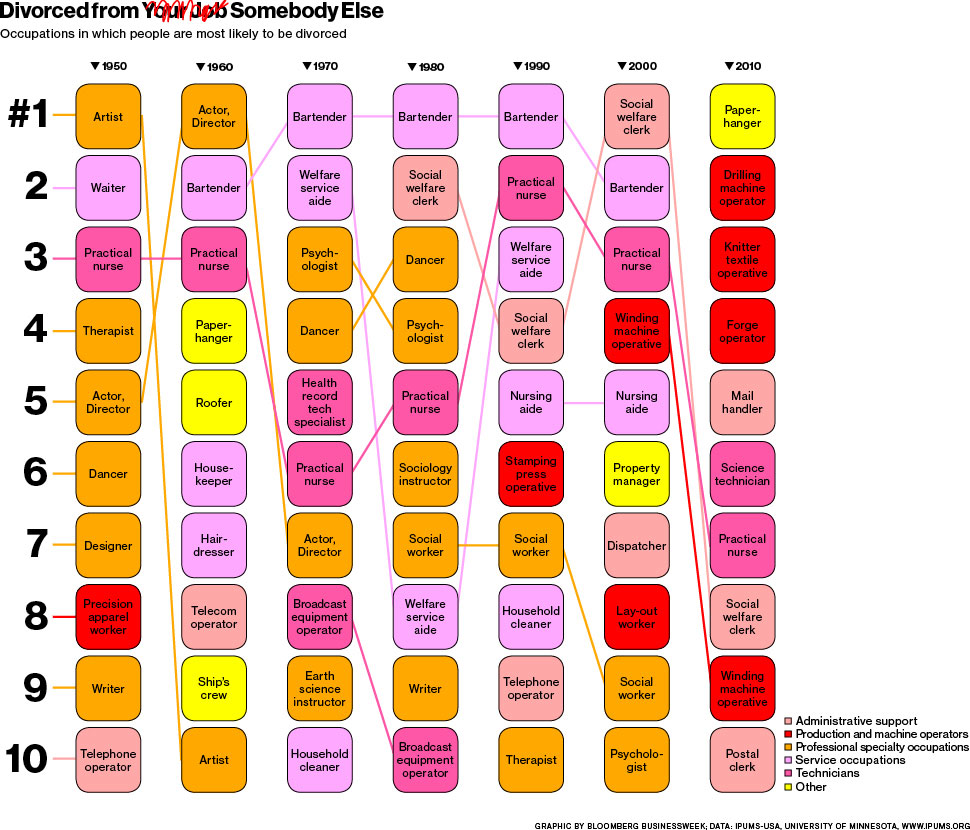 Crime and punishment: In another weekly example of “anecdata,” we’ve got this chart from from Kiernan Nicholls, who plotted his daily progress reading his 490 page copy of the novel “Crime and Punishment.” Actual page turns sadly lagged behind intended ones each week until a deadline appeared and Nicholls suddenly revved into action.

Turning 30: It can be scary for some people. If you’re one of them, let these weird charts by Cecilia Rabess soothe you. 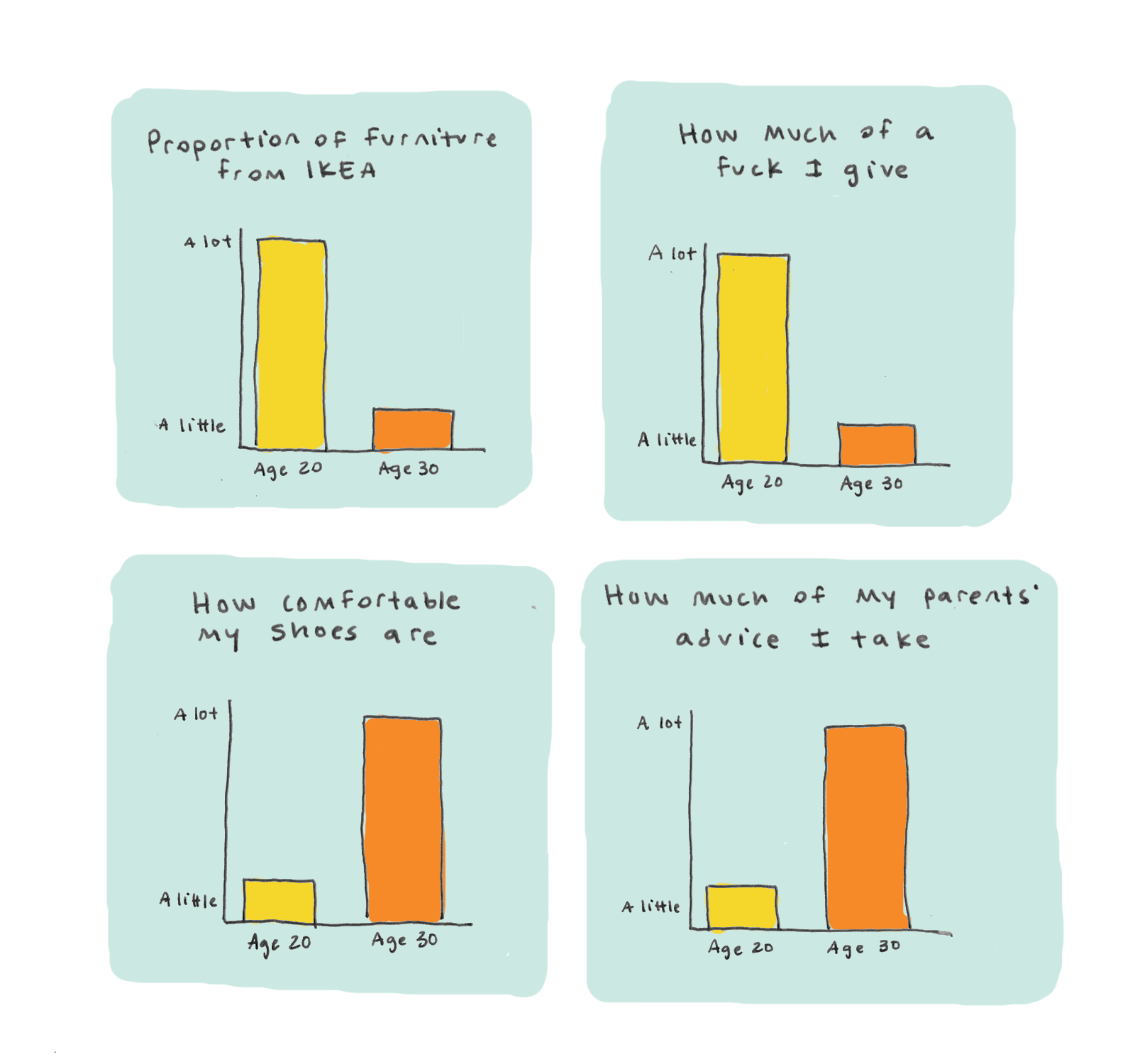