The most iconic scene in the movie “The Social Network” is a parable for the power of new business ideas. Justin Timberlake’s Sean Parker character is sitting across from Mark Zuckerberg (played by Jesse Eisenberg) and Eduardo Saverin (Andrew Garfield), extolling the enormous potential of the little Web-based company they’ve started at Harvard, The Facebook. When a hot, new idea gets off the ground, Parker explains, the possibilities are limitless.

Every company and industry dreams of bagging the kind of growth rates that could make such pie-in-the-sky talk possible. The basic principles of math make it easy at first. If you sell 10 widgets in your first week of existence and 50 in Week 2, you can invent all kinds of billionaire fantasies — all bound to happen in a matter of months if you keep growing that fast.

Right now, there’s a product growing at an astronomical rate. In the past three years, its market share has surged more than fivefold.

But this product is anything but new. Two thousand years ago, when the Romans invaded what’s now England, they found locals guzzling it. It thrived in the Dark Ages and the Middle Ages. The Pilgrims brought it to America. Benjamin Franklin chugged it, George Washington and Thomas Jefferson made batches of it, and Abraham Lincoln poured it at the tavern he owned before becoming president. The rise of beer at the start of the 20th century overpowered it, and Prohibition all but snuffed it out.

Today, decades after that near-death experience, cider is making a huge comeback. And yes, a billion dollars could be in range.

“When I was a kid, we had Bud, Miller Lite, that’s about it,” said Dan Rowell, president and CEO of Vermont Hard Cider, which makes America’s second-best-selling hard cider, Woodchuck. “Now there are so many more choices.”

Many of those choices have sprung up in the past few years. For a while, Vermont-based Woodchuck dominated the American cider scene, launching in 1991 and going mostly unchallenged for two decades. Then, the floodgates opened. In a span of just two years, scads of new players emerged, with major beverage companies Boston Beer Co. (makers of Sam Adams), Anheuser-Busch InBev (Budweiser), MillerCoors (Miller, Coors, many others) and Heineken staking their claims.

All of those moves have made hard cider the fastest-growing segment of the beer and flavored malt beverages landscape, by a mile. Per Chicago-based market research firm IRI, cider sales zoomed 75.4 percent to $366 million in that same 12-month period through the end of November 2014. That does leave cider with just over 1 percent market share. Still, those in the industry speak breathlessly about cider’s potential for further growth, particularly because cider’s share was just 0.2 percent in 2011. (A note: All of the data shown in the tables is from IRI.) 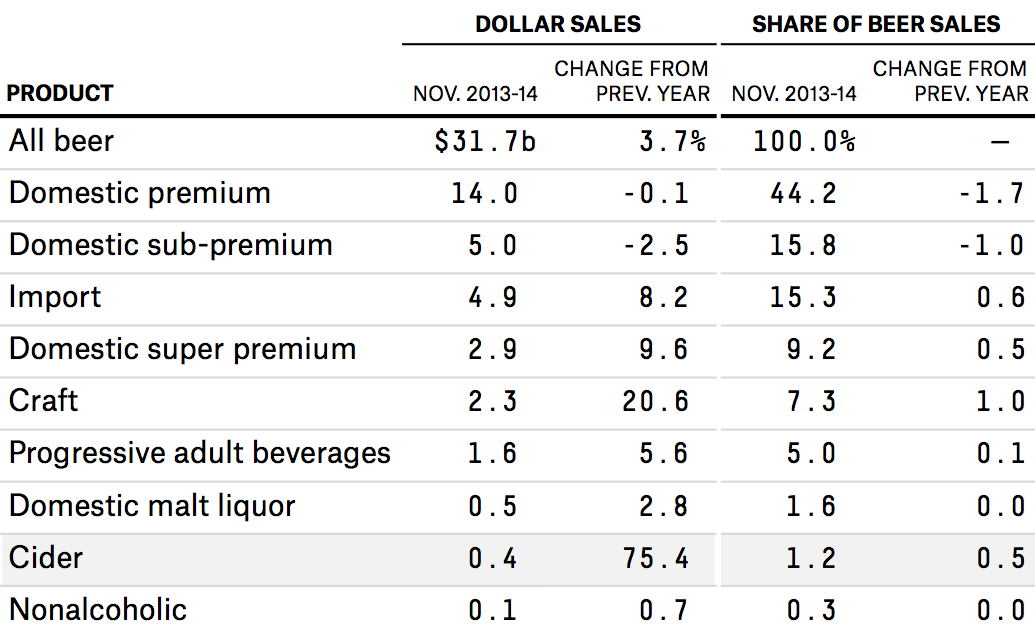 Woodchuck was created after a small group of apple wine makers fiddled with their recipe, sliced the drink’s alcohol content to 5 percent (from 12 percent), and started bottling the new stuff in limited batches. The company set itself apart by using McIntosh apples — the kind you pick off the tree and eat — rather than the non-edible “spitters,” which are high in sugar and tannin. Two decades of market dominance followed, with Woodchuck staying true to its craft cider roots, experimenting with apples and pears and chocolate nibs to produce all kinds of potable concoctions.

Then everything started to change. In April 2012, Boston Beer crashed the party, introducing a new cider called Angry Orchard. Here was a company that had seen loads of success selling craft beer, with its broad line of Sam Adams offerings going from a little regional player to a national concern. Boston Beer had built years of trust with retailers and wholesalers, thanks to the success of Sam Adams. If the company could make a tasty cider, it could leverage those relationships, and its success as a craft drink maker, into big gains. And that’s exactly what happened. In just two and a half years, Angry Orchard went from newcomer to undisputed top dog, bagging 57 percent of the cider market and easily trumping Woodchuck (now No. 2 in America with about 10 percent share). Angry Orchard’s growth became a good proxy for the industry’s growth: U.S. cider sales rose 22.5 percent in 2011, 65 percent in 2012 and then doubled in 2013. 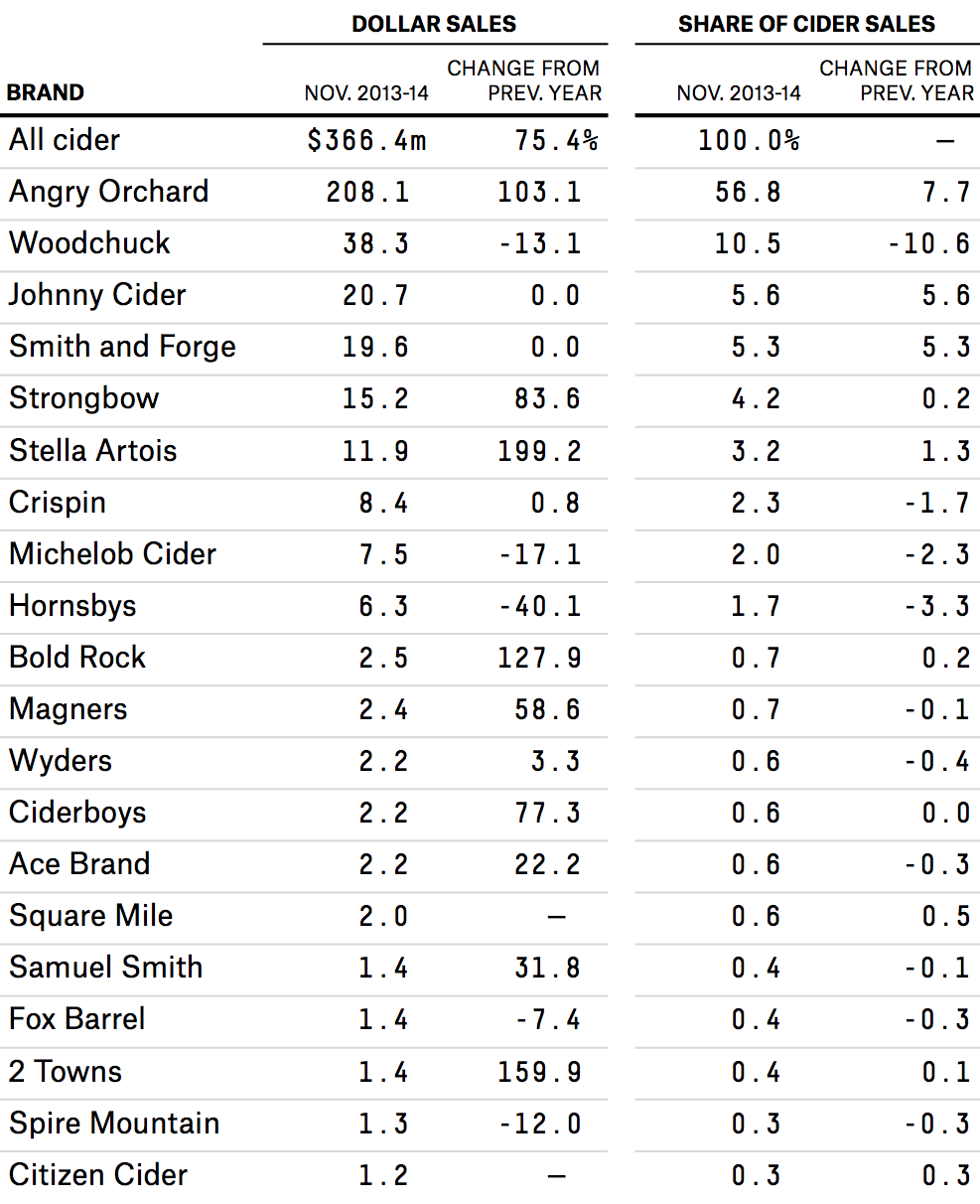 “There’s heightened awareness, where more and more cider is on the minds of [drinkers],” said Vivien Azer, a director at Cowen and Co. who covers the alcoholic beverages industry. “As you get more Angry Orchard tap handles in bars, that’s only going to continue.”

It helps, too, that drinkers are indulging in more than just beer these days. The second-fastest-growing segment of the beer and flavored malt beverages (FMBs) market is craft beer, which has seen sales surge 20.6 percent to $2.3 billion for the 12 months ended Nov. 30, according to IRI. Meanwhile, FMBs — beers mixed with either spirits or some kind of flavoring like apple or lemonade — have also surged in popularity. You can debate the credibility of Apple-Ahhh-Ritas vs, a quality IPA, but the market speaks louder than that bar fight.

Cider experts are also excited about cider’s appeal to women. Although exact figures aren’t easy to come by, industry watchers estimate that cider drinking runs about 50-50 between men and women, compared to something closer to a 70-30 ratio for beer. Azer credits apple cider’s, well, apples for that swing, in the same way that lighter, fruitier summer shandy beers are also generating increased interest among female drinkers.

In the race to get in on the action, new industry players are searching for new niches, even if it means poking at prevailing trends. Last March, MillerCoors jumped into the fray with its Smith & Forge cider, which it overtly markets toward men, promoting what it calls a strong and sturdy taste and showing images of manly blacksmiths and old-timey mustachioed pitchmen in its ads.

“There was a perception that cider is just too sweet to be manly,” said Anup Shah, director of innovation for MillerCoors. So the beer giant introduced Smith & Forge last year in an attempt “to introduce and educate males to the world of hard cider, a beverage that to date, they hadn’t considered.”

While the cider industry borrows gender-linked buzz phrases from the beer wars, one thing it hasn’t borrowed is the greatest scourge currently known to man (or woman): gluten. Because cider is made from apples and not barley or wheat, it’s naturally gluten-free. That plays well in a country where more and more people are being diagnosed with celiac disease (now about 1 percent of Americans), or are discouraged from consuming gluten by doctors to help fight gastrointestinal problems, or might just be into the latest diet fad. According to market research firm Packaged Facts, sales of gluten-free foods hit $2.6 billion in 2010 and are expecting to top $5 billion this year.

“We realized early on that it was something drinkers would respond to,” said Angry Orchard cider maker David Sipes. “Celiac and gluten-free lifestyles are absolutely an appealing element of cider. We don’t play it up in advertising necessarily. It is on our label though.”

With American tastes becoming more attuned to cider, some companies are tunneling deeper into the marketing rabbit hole. None more than Heineken, the parent company of Strongbow, a heavy seller overseas that’s just No. 5 in the U.S. but is aiming higher. Charles van Es, Strongbow’s senior brand director, talks excitedly about cider’s potential as “the first drink of the night,” the lighter option that you can order right when you hit the bar after work.

Strongbow isn’t stopping at occasion-based marketing, though. In October, the company launched a new ad campaign, describing Strongbow as “Cider at its Bestest.” Its TV spot features a couple walking happily along the beach, glasses in hand, with a slow-motion horse galloping majestically the background. The ad’s takeaway, equine themes aside, is that Strongbow should be enjoyed over ice. For van Es and Strongbow, as well as rival cider makers like Anheuser-Busch InBev’s Johnny Appleseed, this seemingly trivial addition is what will further the cider rush.

“In the U.K., market share was stagnant for a whole … and then it completely blew up,” van Es said. “What happened was Bulmers and other big European cider brands, they transformed the category just with ice. Think about it. You can’t add ice to beer, unless you want to get a lot of funny looks. But with cider, you can. So you have apples, carbonation, then you add ice and it just amplifies the refreshment. It makes it a perfect drink.”

If it seems nuts to get jacked up about the power of ice, consider what cider’s upside might be. You can’t go two minutes talking to a cider company exec without hearing about the roughly 15 percent share of the beer market that cider holds in the U.K. And while no one’s predicting that kind of surge, there’s hope for a big move in the near future. Even a more impartial party such as Cowen and Co.’s Azer is thinking big, projecting a 15 percent compound annual growth rate for cider over the next five years.

Potential obstacles remain. Talk to most anyone in the industry, and they’ll express the same concern: That as cider becomes more popular, new companies could enter the market, produce terrible-tasting drinks and scare people away from cider altogether.

But industry watchers are optimistic that an occasional mouthful of lousy cider won’t derail the prevailing momentum. They’re hoping that just as a bad experience with a microbrew won’t chase a drinker off the vast and tasty craft beer boom, the recent rise of cider makers will keep customers coming back, too.

If that’s what happens, then a billion dollars really could become a reality.