Cellphones are increasingly globally ubiquitous. And like many technologies (for example, microwaves), their increased use has come with health concerns. Among the most prominent is that using cellphones can lead to brain tumors. Most recently, a paper from a team in Sweden has again concluded that the use of cellphones and cordless phones increases the risk for tumors, most specifically glioma, a type of usually malignant brain tumor.

In this study, mobile phone users were 30 percent more likely to develop gliomas. Those who used phones for 25 years or more were 200 percent more likely. These effects are enormous, although they are still small in absolute terms. The chance of developing a brain tumor of this type every year is about 3 in 100,000. The researchers concluded that long-term mobile phone use increases this chance to about 9 in 100,000. That’s still small, but it’s a substantial increase. And this possibility might be enough for many of us to switch to hands-free devices (which avoid these issues because the phone is not against your head).

This team has considered the same questions, and reached the same conclusion, before. And it’s not the only one. The International Agency for Research on Cancer cites mobile phones as a “possible” carcinogen.

However, the supposed cancer-phone link is not without controversy. Somewhat atypically, the disagreement breaks down along methodological lines. The first camp uses what are called “case-control” studies and usually concludes that there is a link between mobile or cordless phones and tumors. The second camp uses observational studies and generally concludes there is absolutely no relationship. So, which is it?

It’s worth starting with the “ideal” study here, which would be a randomized controlled trial. Take a group of people without mobile phones, give half of them mobile phones, and follow them for 15 to 20 years to see how many of them develop brain tumors. You’d need a huge sample because, as we noted, brain tumors are very uncommon. For a number of reasons — foremost, nearly everyone already has a mobile phone — this isn’t feasible.

Usually, our next best option would be a prospective observational study: Take a group of people and collect data on their use of cellphones. Then follow them over time and see who gets brain cancer. The downside of this relative to the randomized trial is that people who use cellphones might be different from those who do not. But this is probably not a major concern here, because brain tumors are pretty random and most people use cellphones.

But even this approach is very difficult, because you need an enormous sample size given the rarity of the condition. If you enrolled 50,000 people and followed them for 10 years, you would only expect to see about 20 gliomas. This is far too few to detect differences across groups. And the larger the study, the more expensive and more difficult it is.

For this reason, much of the work on cellphones and cancer has used an alternative approach: the case-control study. Here’s how it works: You find a bunch of people with brain tumors (the “cases”). You then find a bunch of people who are similar (in age, sex, etc.) but do not have tumors (the controls). You survey both groups about their behaviors, and you try to identify behaviors that differ across the groups. In this case, researchers look for differences in mobile and cordless phone use.

There are two large research projects on mobile phones and brain cancer based on data from case-control studies. One is the Swedish study discussed above, which finds the very striking effects.

A second case-control study — run in multiple countries — found no effect overall but an increase in tumor rates for those individuals who used their phones most; that is, the top 10 percent of users. The authors of the study were cautious in interpreting their results, but it remains concerning that heavy use would matter.

However, these links are not seen in the two large prospective studies on this issue. One, a Danish cohort study, followed effectively all individuals in Denmark (again, such a large sample is really the only way to detect effects) and used administrative data (from the phone company) on their mobile phone subscriptions. This study found no effect on brain tumors of any type.

A study of almost 1 million women in the U.K. came to the same conclusions. This one asked women about their phone use and then followed them for seven years. Researchers found no link with most cancers. There was a weak link between heavy cellphone use and a cancer called acoustic neuroma, although the authors effectively concluded that this link was a spurious correlation in the data.

In general, these results together would be more than enough for everyone to conclude that mobile phones do not cause cancer. The methodology behind a prospective study is much stronger than that of a case-control study. The latter suffers from recall bias (I have cancer, and I want to blame something, so I over-remember my phone use). This is a particular concern because the data in some of these studies is collected from relatives after the person with cancer is dead. It may be quite difficult (i.e. impossible) for relatives to remember how often someone used a phone in the decade before the illness.

The proponents of the cellphone-tumor link (in research circles, the Swedish researchers are the biggest supporters) argue that the large prospective studies are also flawed. In particular, they do not collect detailed data on phone use, so it is hard to identify heavy users. This group argues that the flaws in the case-control studies are less serious, and its results should be believed. The researchers are vigilant both in publishing their results and in commenting on any results that do not support their view.

There is, however, a simple way to settle this debate. If this group is correct about the size of the effect of cellphones on brain cancer, brain tumor rates should have been dramatically increasing since the introduction of the mobile phone. A study in the U.S. published in 2012 evaluated this possibility by comparing observed rates of glioma to projected rates from two studies for the period from 1997 to 2008. It found that brain tumor rates are pretty much unchanged since mobile phones arrived. If the Swedish team is right about the size of the cellphone effect, tumor rates would be 40 percent higher than they are. There is virtually no way its results are correct. 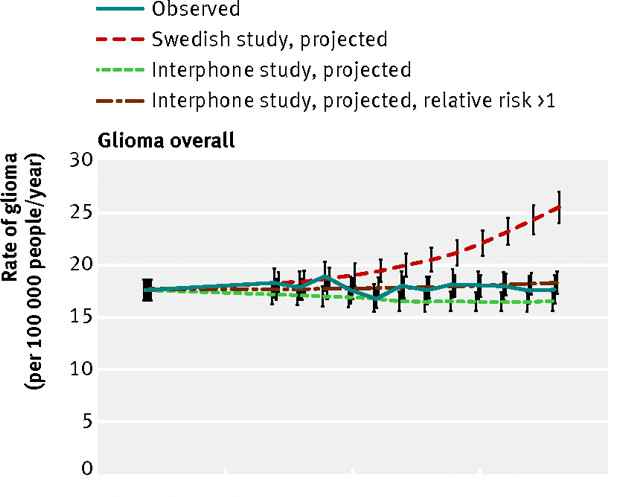 In the end, it is simply extremely unlikely that there is any link between cellphones and brain tumors. We can, perhaps, put this debate to rest and focus on the actual danger of cellphones: using them while driving.