One blind spot of the analytics movement has been its underappreciation of postseason play. I don’t necessarily mean that “COUNT THE RINGZ” is a better paradigm. But there are all sorts of interesting empirical questions raised by the playoffs that analysts have sometimes ignored. Are the factors that yield postseason success different than those that bring it in the regular season? How much should postseason play be weighted when predicting future performance? Too often, postseason play is written off as a crapshoot — Billy Beane’s shit doesn’t work in the playoffs — and then not much more is written about it.

That characterization may be largely accurate in baseball, where even the best teams have no more than a small edge in a playoff series. In the NBA, by contrast, a team’s advantage can be more definitive, and a team almost never wins the NBA title as a fluke.

The NFL playoffs are somewhere in between. The sample sizes are tiny: With a one-and-done playoff structure, the league plays only 11 playoff games each year. But those playoff contests have a lot of empirical significance. Postseason games usually involve two strong teams, and games between closely matched opponents usually reveal more about team quality than lopsided ones. Nor will teams rest key players in the NFL playoffs, as they sometimes do in the regular season, or sacrifice the opportunity to win that day for the sake of developing young players.

In any event, one nice aspect about FiveThirtyEight’s NFL Elo ratings is that they integrate regular-season performance and playoff performance seamlessly. Here’s how the ratings changed after the wild card games the league played last week.

There was almost no movement at the top of the table, in large part because the four teams that Elo had rated highest going into the week all had byes. But there will be more movement in the standings as we run deeper into the playoffs. Elo doesn’t explicitly place a larger weight on playoff games, but in practice they can have a lot of impact — because they’re the most recent games in a team’s portfolio (Elo weights recent games more heavily), and they involve top teams matching up against each other. Ordinarily, it would be hard for the Indianapolis Colts (ranked No. 7) to make up its 71-point Elo deficit with the Denver Broncos in a single week, for instance. But because the teams will play each other Sunday, any Elo gains for Indy will come directly at Denver’s expense.

As a result, Elo usually winds up agreeing that the Super Bowl winner was the best team in the league. We’ve run historical Elo ratings back to 1970, or for 44 seasons not counting the current one. In 36 of those 44 cases (82 percent), Elo ranked the Super Bowl winner highest at the end of the season.

Of course, Elo matches the Super Bowl winner 82 percent of the time only with the benefit of hindsight. As we described last week, the team ranked No. 1 in Elo before the playoffs start wins the Super Bowl only 34 percent of the time. Still, it’s rare to find a Super Bowl winner that we can say was truly lucky or “undeserving”; it may have been instead that we overlooked the team during the regular season. There are often cases like the 2000 Baltimore Ravens, who jumped from No. 5 in the Elo standings at the end of the regular season to No. 1 after winning the Super Bowl, defeating the teams that had previously ranked Nos. 1 and 2 (the Oakland Raiders and Tennessee Titans) along the way. The one real exception is the 2007 New York Giants, who upset the undefeated New England Patriots in Super Bowl XLII; even knowing that result, Elo would still have favored the Patriots by more than a touchdown if the teams had played a rematch the following week.

The Seattle Seahawks remain the best bet to win this year’s Super Bowl, according to Elo. In fact, their chance of doing so improved slightly, to 37 percent from 35 percent last week despite their being idle. That’s because Seattle will face the Carolina Panthers, the weakest team to make the playoffs. By contrast, the odds for the Patriots, the No. 1 team in the AFC, have fallen slightly because they’ll have to face Baltimore after the Ravens gained more Elo points than any other team in beating the Pittsburgh Steelers last week. 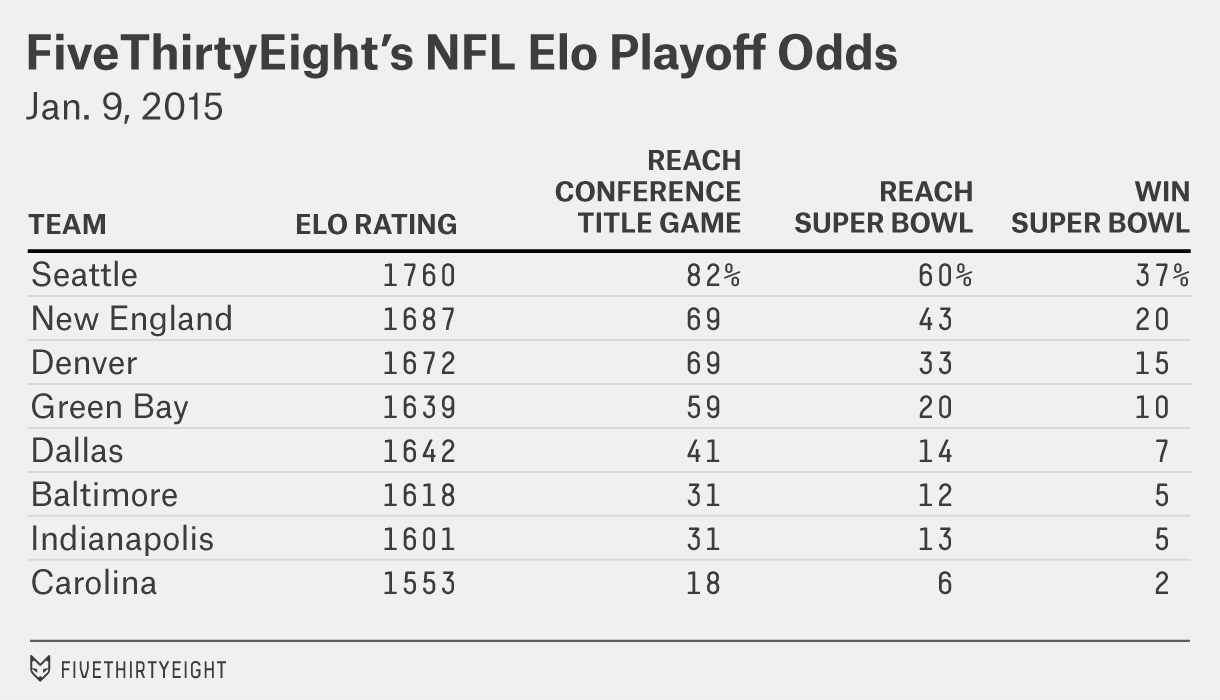 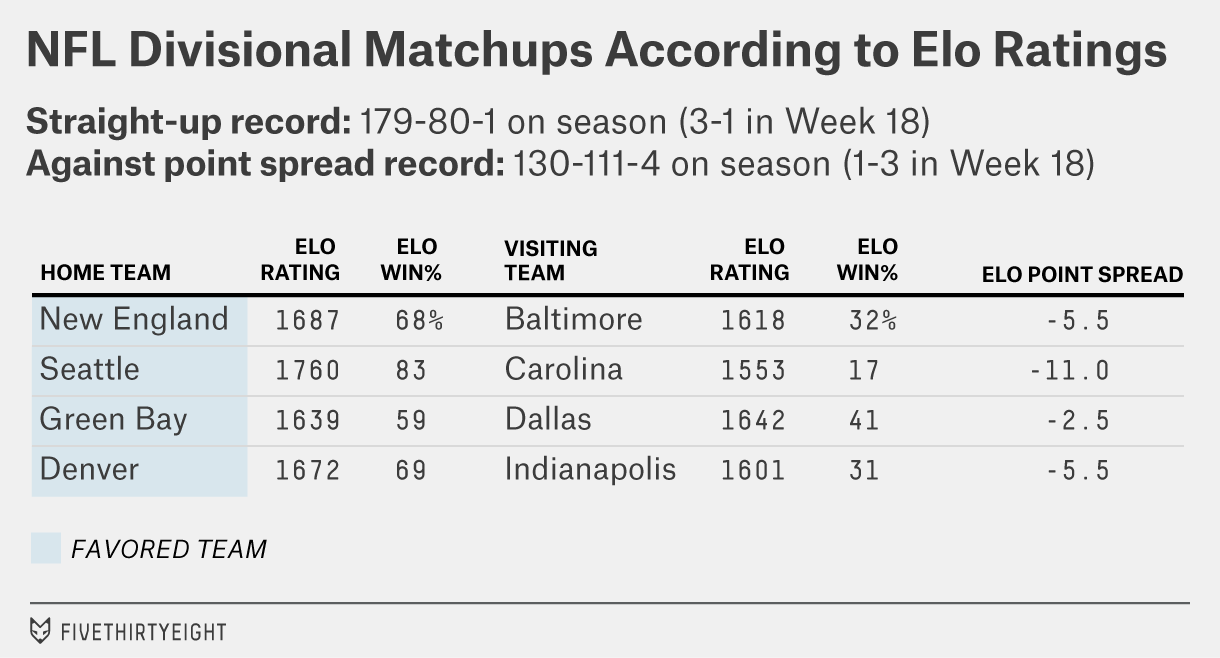 Elo most differs from the conventional wisdom in its assessment of the Dallas Cowboys-Green Bay Packers matchup. While Vegas odds had the Packers as six-point favorites as of Friday afternoon, Elo has the Pack as 2.5-point favorites instead, essentially giving the team credit for its home-field advantage and nothing else. There are all sorts of additional factors you’d want to evaluate before betting on this game — in particular, Aaron Rodgers’s health and the weather at Lambeau Field — but it looks like the best matchup of the week.