In preparation for the 2015 NFL season, FiveThirtyEight is running a series of eight division previews, each highlighting the numbers that may influence a team’s performance (including projections and rankings based on ESPN’s preseason Football Power Index). Here’s what’s happening in the AFC West.

When Denver Broncos general manager John Elway signed quarterback Peyton Manning in the spring of 2012, he had one goal: a Super Bowl victory. The year before, Denver had won the AFC West1 despite starting a sub-replacement-level QB named Tim Tebow. With Manning under center, the championship possibilities would skyrocket as long as Peyton had a functioning neck.

It’s now the eve of Manning’s fourth season in Denver, and the team still hasn’t captured that title. What the Manning-era Broncos have done, though, is win just about as many games as is possible without winning a Super Bowl. Since the 1970 NFL-AFL merger, only three teams have posted more regular-season victories in a three-year span than the 2012-14 Broncos without winning a ring:

The weight of failed expectations fell hardest on coach John Fox, who was fired within 24 hours of Denver’s playoff loss to the Indianapolis Colts this past January. Now Gary Kubiak is in charge, and with him comes a new coaching staff and the usual vows to lighten Manning’s workload with an increased focus on the running game. But regardless of the coach or scheme, the history of similar teams doesn’t bode well for the Broncos’ Super Bowl chances during what might be Manning’s final NFL season.

In 21 tries since 1970, only two teams (the 2006 Colts and 2014 Patriots) won a championship immediately after a three-year run of 36 or more regular-season wins and zero Super Bowls. And both of those teams’ rosters were younger2 than the average post-merger team during the preceding season. The Broncos do not fit into that category. Another go-round with the same old crew rarely yields different results.

The Broncos’ saving grace, however, might be that this isn’t exactly the same old crew — at least, not according to the Approximate Value-based measure of talent continuity that my colleague Walter Hickey and I used in our NFC East preview. Only 76 percent of the AV of the 2014 Broncos team is expected to be on the roster in 2015, which means their personnel shake-up ranks as the 10th-biggest of the offseason. That isn’t necessarily a good thing (teams with less continuity tend to do worse than their peers even after controlling for previous talent), but in Denver’s case it may be the change the team needs to break the cycle of three consecutive playoff disappointments.

A team as perennially inconsistent as the Kansas City Chiefs is tough to forecast. Over the past five years, only the Houston Texans have averaged more year-over-year upheaval in their win totals than Kansas City, and the franchise hasn’t strung together back-to-back playoff bids since 1995. They failed to do so again last year, when an up-and-down campaign saw them rise as high as seventh in FiveThirtyEight’s Elo ratings at midseason. They then lost four of their last six games and finished with a 9-7 record and in eighth place in the conference.

Perhaps some of Kansas City’s uneven efforts stem from its “stars and scrubs” formula: collect a handful of top-tier talents (among them linebacker Justin Houston and running back Jamaal Charles) and surround them with a bunch of marginal players. Conventional and enlightened wisdom suggest that such a team is at a fundamental disadvantage because it lacks depth. When the stars don’t live up to expectations (whether because of injury or underperformance), only castoffs remain to carry the load. And since injuries are an unavoidable fact of NFL life, the thinking goes, no stars-and-scrubs team can survive the devastating loss of an important player.

The Chiefs’ talent pool is one of the most stratified in the league. We can demonstrate this using … Madden ratings. Yes, they’re from a video game, but because the game’s ratings are roughly designed to capture real-life skills and simulate performance on the field, they’re a reasonable proxy for player ability.

To quantify exactly how much each team figures to rely on its star talent, I gathered the “overall” ratings assigned to each player in Madden and then computed a weighted3 standard deviation of them for each team. The result tells us how spread out (and therefore indicative of a stars-and-scrubs model) or balanced a team’s roster is.

That calculation showed that the Chiefs’ roster boasts the sixth-largest standard deviation of Madden ratings, meaning they rank among the league’s biggest stars-and-scrubs teams. But, curiously, they’re joined atop the list by the Packers, Seahawks, Steelers, Cowboys and Broncos — in other words, a bunch of good teams. Meanwhile, the rear of the rankings are brought up by the lowly Jaguars and Titans. If an imbalanced roster is such a bad idea, why is there such a strong correlation between a team’s spread of talent and its Football Power Index (FPI), ESPN’s new power rating that statistically judges the strength of each team? 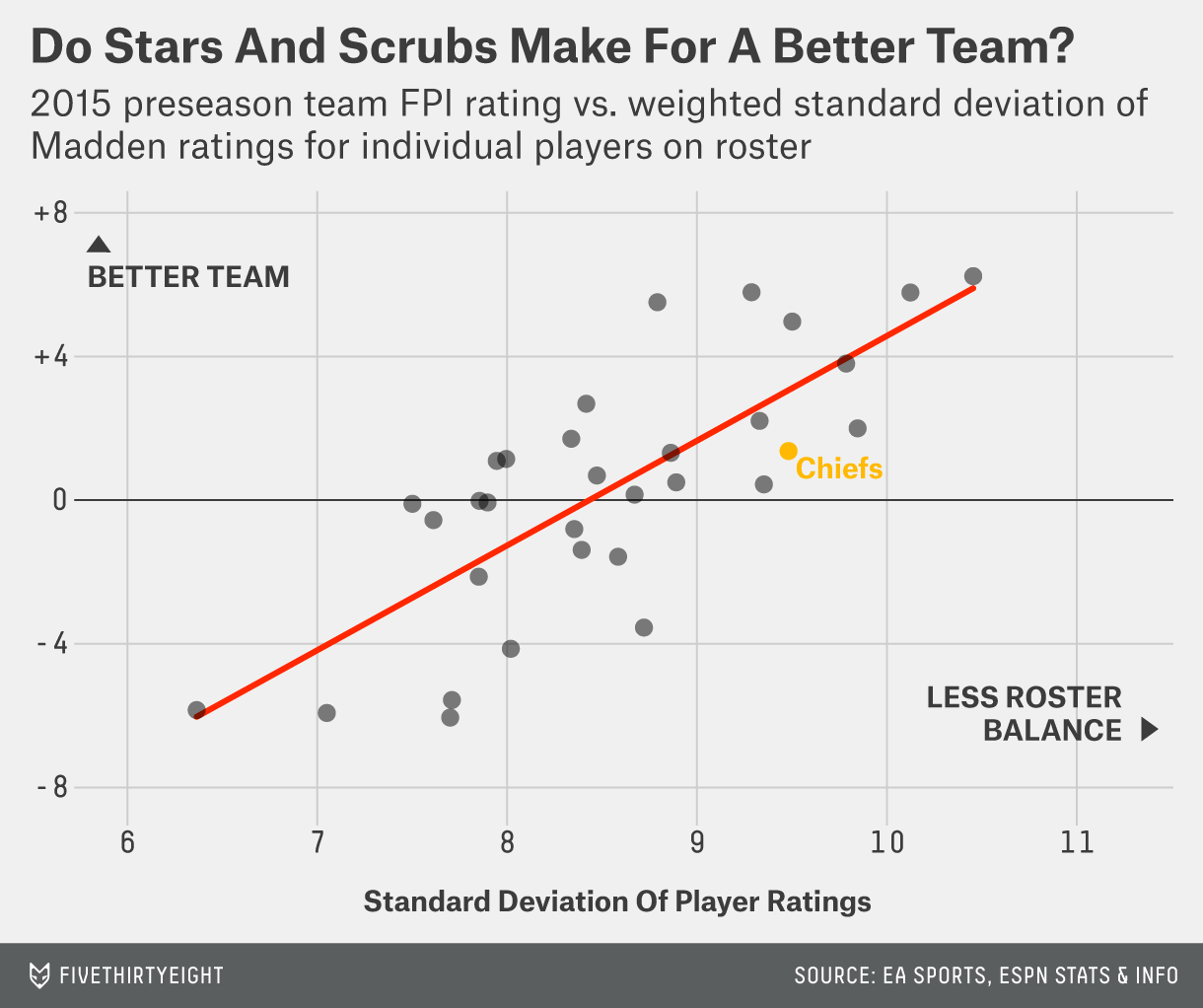 It may be that building a stars-and-scrubs roster isn’t a terrible idea after all, probably because of the pyramidal distribution of talent in sports.4 Madden ratings are roughly designed to mirror the scarcity of real-life talent, so there’s an abundance of players rated in the low 70s or worse on Madden’s 0-100 scale.5 That means the only way a team can increase its standard deviation is by adding rarer players with better and better ratings — i.e., stars.

In short, it may be the case that there are no stars-and-scrubs teams — just teams with varying levels of star power. And, luckily for the Chiefs, they aren’t lacking in star power.

Baseball has its 20-win barrier for pitchers, but football’s 20-win group is almost certainly more meaningful — and last season, San Diego Chargers quarterback Philip Rivers became one of the youngest ever to join it.

I’m talking about 20 career passing wins above replacement, or WAR, which can be calculated by plugging Football Outsiders’ defense-adjusted yards above replacement (DYAR) into a formula that also takes into account the quality of a team’s defense and the productivity of its rushers and receivers. (My colleague Harry Enten used the same method to estimate the effect of Tom Brady’s (non-) suspension on the Patriots’ win total.) A year ago, Rivers became just the fourth QB since 19896 to rack up 20 or more passing WAR through his age-337 campaign. The only passers8 to have notched more lifetime WAR at the same stage of their careers were Peyton Manning, Drew Brees and Tom Brady.

The NFL is more of a pass-heavy league now than ever before — Steve Young’s brilliant 1994 season is the only one from before 2000 that is still in the single-season WAR top 20 — so modern-day quarterbacks certainly have an advantage when it comes to racking up gaudy WAR totals. Even against that backdrop, though, Rivers has excelled. Only Manning, Brady and Brees have produced more than him during the span of his starting career (2006-14) thus far.

But that’s part of the problem with Rivers: no matter how good he is, he’ll never get especially close to taking on the mantle of “NFL’s best passer.” Certainly not as long as Manning and Brady continue to wage their epic, decade-and-a-half-long war for all-time quarterbacking supremacy, nor when it comes to competing against a younger wave of QBs led by Green Bay’s Aaron Rodgers. In fact, with Brees in the mix, Rivers is probably not even the best quarterback who started for the Chargers in the 2000s: 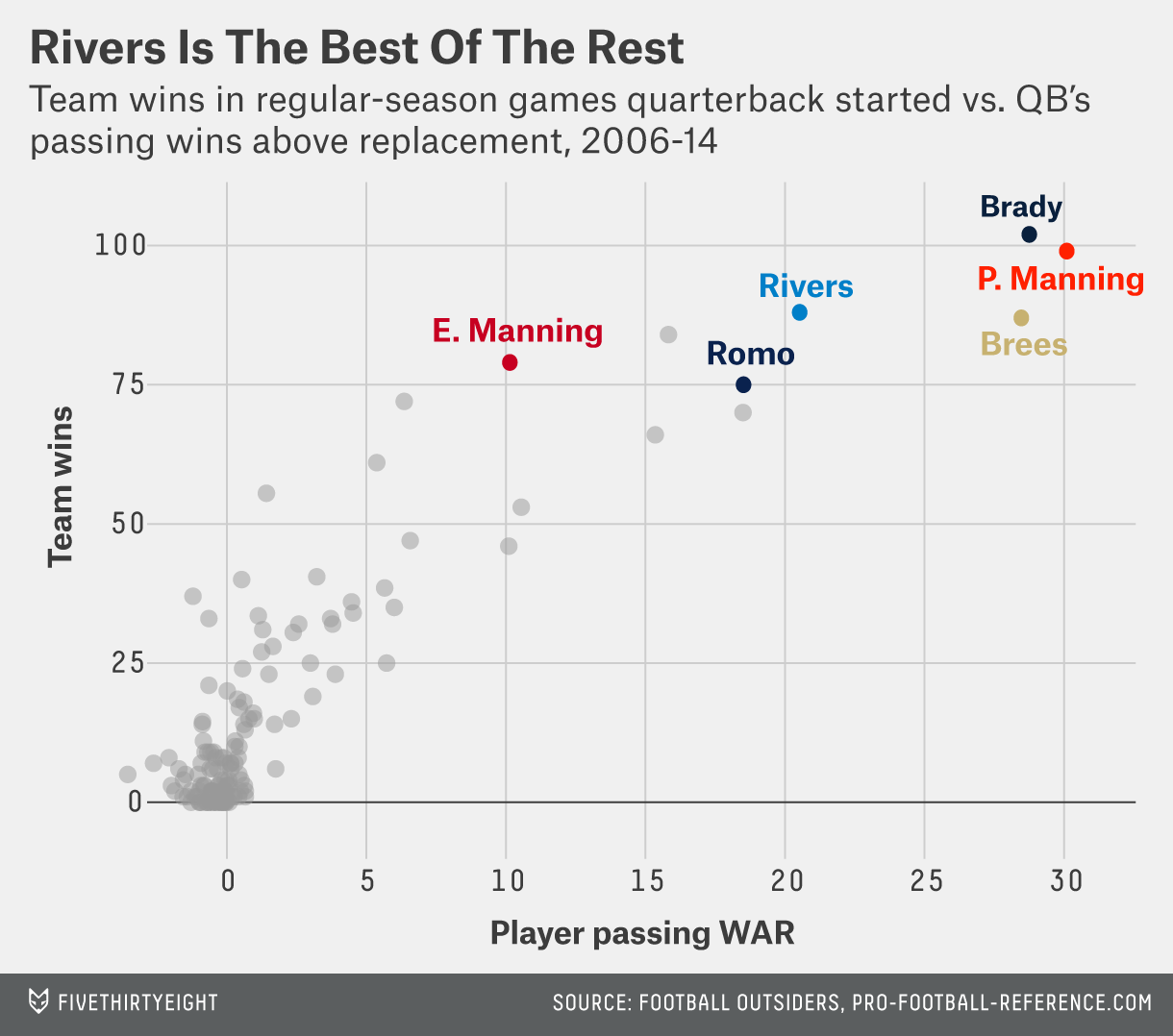 Among Brady, Manning and Brees, there’s an obvious upper tier of quarterbacks that Rivers has neither the individual numbers nor team accomplishments to join. Meanwhile, there’s another cluster of QBs beneath Rivers that includes Tony Romo, Ben Roethlisberger, Matt Ryan, Rodgers (at least for now) and maybe even Eli Manning, for whom Rivers was traded in the 2004 draft. Between the two groups lies Rivers and a vast swath of deserted space. What must it feel like to know you’re neither elite nor upper-middle-class? That’s the question Rivers has faced his whole career.

Oddsmakers think there’s a chance that the Chargers will soon move to L.A., and it’s rumored that Rivers would rather retire than follow the team there. So if this is Rivers’s last season in San Diego, it should warrant some thought about his run with the franchise and where he ranks historically. He has the third-most QB victories and fourth-most WAR of his generation, yet no Super Bowls (or even a conference championship). He wins games, but can’t win the big one; he racks up stats, but not the most.

Rivers is, as always, a man without a home.

The Oakland Raiders have been bad for so long that it’s difficult to remember the last time they were, well, anything else.

On Sunday, when the Raiders start their 2015 schedule, it will have been 1,380 days since the franchise last sported an Elo rating of 1500, the mark of a perfectly average NFL team. (Only the Cleveland Browns — for whom it’s been a staggering 2,507 days — and Jacksonville Jaguars — 1,723 days — have gone longer since breaking average.) Yet that isn’t even the franchise’s longest below-average streak (2,872 days!). The only thing interrupting these two epochs of blech? A short-lived and unimpressive spurt when the Raiders hovered around average for a mere eight games, topping out with an Elo of 1542 (about the quality of last year’s Bills). They then slid back into the abyss.

So to determine the last time the Raiders were good enough to reasonably contend for a Super Bowl — which I’m somewhat arbitrarily defining as an Elo of 15759 — you’d need to go back to Oakland’s game against the Chicago Bears on Oct. 5, 2003. Despite a 2-2 start to the 2003 season, the Raiders were coming off a season in which they’d made the Super Bowl and finished second in Elo,10 so they still carried a relatively strong 1578 rating into the contest. But a 3-point home loss to Chicago was the first in a run of 10 defeats in Oakland’s final 12 games. The rest was, and continues to be, history.

Come Sunday, that game will have taken place 4,361 days ago, which represents the 13th-longest spate of noncontention in post-merger11 NFL history. Yet, somehow, it’s still only the third-longest such drought among currently active teams: 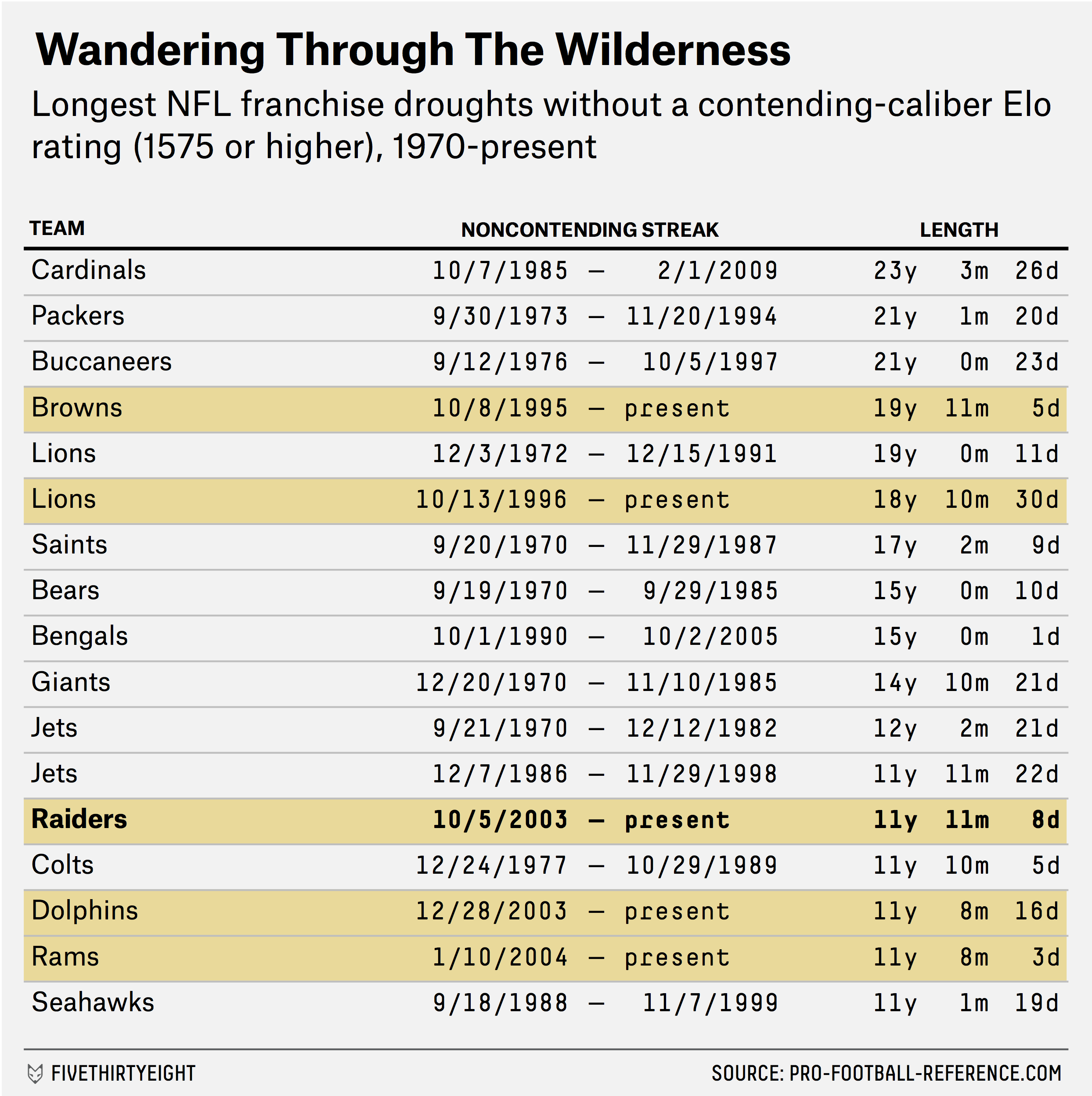 The Raiders can’t win, even when it comes to soul-crushing dry spells. But don’t despair, Raiders fans: Many of the suffering teams in the list above went on to enjoy periods of great prosperity once they finally broke their cycles of disaster. The 2015 Raiders probably won’t be that team (at least, if the preseason FPI projections are any indication), but if history is any guide, the next good Raiders team might be really good.