“Moneyball” told the story of a plucky Oakland A’s team that exploited market inefficiencies, overcame the loss of several excellent players and went on to have one of the best seven-year runs in franchise history. Today’s A’s have won two straight AL West titles and are in the hunt for a third. They also have fewer elite homegrown players than their predecessors did a decade ago — even the most hardcore baseball fans would have a tough time naming a single A’s superstar. Given their lack of top talent, and the extremely subtle methods they’ve used to build a winner, you could argue that today’s A’s are even more “Moneyball” than their forebears were.

The A’s lack of reliance on star players, combined with their recent success, has engendered numerous articles singing their praises and extolling the virtue of a team that uses balance, depth and versatility (and not star power) to win games. Hell, even the defending champion Boston Red Sox — a big-revenue ballclub with a $155 million Opening Day payroll — embraced the power of roster balance and depth to win it all.

It’s easy to praise that kind of balanced approach as shrewd. It’s equally easy to denigrate teams that spend a boatload of money on a few famous veterans, leaving the rest of the team fighting for the last few dollars left. But is one tack really more effective than the other? If you want to build a winning baseball team, which strategy works best — a balanced roster, or one made up of stars and scrubs?

The baseball statistics site FanGraphs’ version of WAR is calibrated to reflect year-end win totals. So if you have two teams generating 50 wins at the end of the season, one with a stars-and-scrubs roster, the other with a balanced squad, the team that will perform better is … neither. After 162 games, wins are wins, regardless of how you acquire them.

The best way to solve this problem is to use monthly WAR data, which the good folks of FanGraphs were able to provide. We looked at WAR and WAR distribution for the month of April each year from 1974 through 2013.1 We ran month-by-month Gini data for every team going back those 40 years, tracking WAR inequality for the month, then comparing that result to WAR totals for the rest of the season, to see which of the two roster construction methods yielded more wins.

The result? Having a larger Gini coefficient (as you’d see in a stars-and-scrubs roster) is ever so slightly associated with better outcomes over the rest of the season. However, the effect wasn’t large enough to be statistically significant, so this analysis says a team should probably just be indifferent about which approach it uses to build a roster.

Of course, this merely tells us about future outcomes for teams that have certain WAR distributions in April. Trying a different route, we split up the monthly data into half-seasons, to see whether this finding (that Gini doesn’t matter after controlling for WAR) holds for a different timeframe. We computed each team’s WAR Gini number for each half-season — June and before, and July and after. Once again, we found that the Gini number was nowhere near statistically significant.

Taking one last stab at the problem, we broke seasons up into even and odd months, just in case there was something about a pre- and post-July sample of games that might skew the results. At last, we found a Gini coefficient that was pretty close to being statistically significant. But here’s the thing: The effect was still very small for the purposes of measuring real-life wins and losses. For every one standard deviation of change in the Gini number, you get 0.37 wins per 162 games2 — about the same effect as replacing the crappy last guy on your bench with a slightly less crappy 25th man. 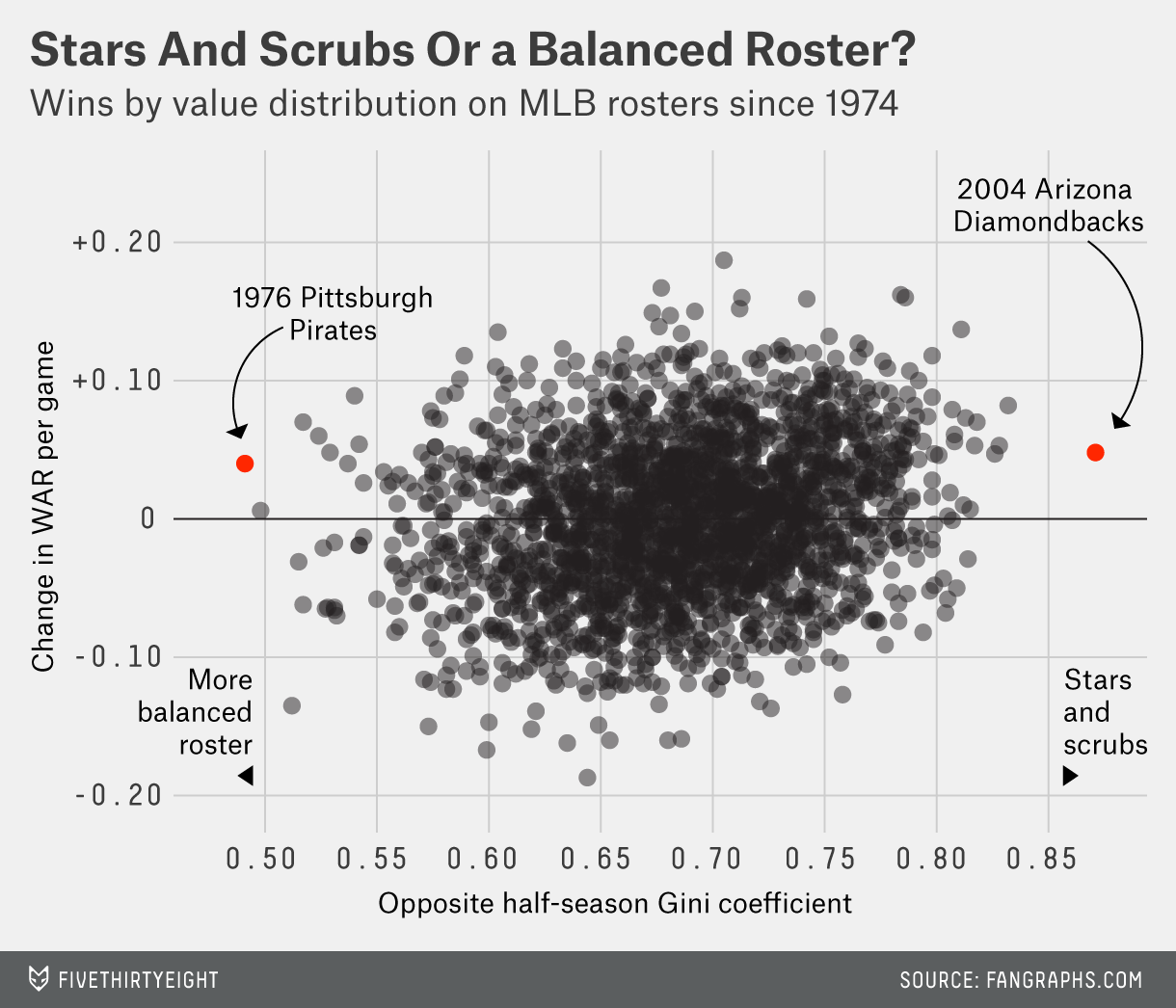 Looking at the numbers as a whole, we arrive at this conclusion: Build a balanced roster or a stars-and-scrubs roster. Either way, which players are good, and how good they are individually, doesn’t make any difference after we control for how good the team is in the aggregate. The moral of the story is to find players who generate as much value as possible, in whatever combination, period.

But if the way teams get their wins doesn’t matter much when looking at the forest, there might still be some lessons we can learn by zooming in on a few trees. Specifically, the most and least balanced teams in our data set.

The most imbalanced team during our 40-year stretch was the 2004 Arizona Diamondbacks. And man, did they suck. The D-Backs won just 51 games that year, and lost 111. Only one team in the past 40 years lost more games: the 2003 Detroit Tigers, who went 43-119.3 Those Diamondbacks employed Randy Johnson, who in 2004 reeled off the seventh-best season by any starting pitcher in the past 40 years, racking up 9.5 wins above replacement.4 Only one other player on that D-Backs team, fellow starting pitcher Brandon Webb, produced more than two wins above replacement that year; a two-win player is a league average player, which means only two members of the ’04 Diamondbacks even managed to be better than average.

Turns out that D-Backs club wasn’t unique when it comes to an extreme stars-and-scrubs roster and lousy results. The 16 teams with the biggest WAR distribution in our study all finished below .500. Combined, they averaged fewer than 64 wins per season. You can win quite a few games with LeBron James and a bunch of crummy players, because the best basketball players deliver far more value than the best baseball players.5 One superstar and 24 Oompa Loompas gets you nowhere in baseball.

Here again we find that at the extremes, roster composition does seem to matter. The eight most balanced teams in our sample all finished at .500 or better, averaging 94 wins a season.

Really, it comes down to this: There are advantages and disadvantages to both roster-building approaches. Assembling a deep and balanced group of players insulates you against one injury torpedoing your entire team. But there are still legitimate reasons to pay the best players $25 million a year or more; an elite baseball player might not be worth 20-plus wins the way the top NBA superstars are, but tacking seven, eight or more wins onto your team’s ledger can make a big difference.

Even the scrubs element of the stars-and-scrubs approach can be a blessing in disguise. If a severely imbalanced team gets to the trade deadline and is in contention, it’s much easier to acquire a decent player who’ll be an upgrade over its terrible existing option than it is to do the same for a balanced team that already has decent players at every position.

We might get a few more test cases on both ends of the spectrum this year. The deep and balanced A’s are tied for first place in the AL West. On the other hand, the New York Yankees project as one of the most extreme examples of a stars-and-scrubs roster. They employ multiple high-value players like Masahiro Tanaka, Hiroki Kuroda, Jacoby Ellsbury, Brett Gardner, Carlos Beltran and Brian McCann, but also a highly questionable infield that includes Mark Teixeira with a bum wrist; aging, injury-prone second baseman Brian Roberts; a third-base combination of Yangervis Solarte and Kelly Johnson that’s off to a hot start but figures to regress dramatically; plus Derek Jeter, the Hall of Fame shortstop now on his last legs. So far, that approach has worked, with the Yankees leading the AL East, and the possibility of trades to upgrade weak positions looms in June and July.6

A poor team like the A’s might have no choice but to pursue that balanced method, since they lack the big revenue stream that would allow them to pay multiple veteran superstars. Doubly so without the army of homegrown stars like Barry Zito, Tim Hudson, Mark Mulder, Jason Giambi, Eric Chavez and Miguel Tejada who led the way for the “Moneyball” A’s. Meanwhile, the Yankees might never be able to resist the siren song of a $100 million (or $275 million) player. If the two approaches deliver similar results, that could be an equalizer for low-budget teams trying to keep up with their richer rivals.