In preparation for the 2015 NFL season, FiveThirtyEight is running a series of eight division previews, each highlighting the numbers that may influence a team’s performance (including projections and rankings based on ESPN’s preseason Football Power Index). Here’s what’s happening in the AFC East.

You may have heard that some guy named Tom Brady was suspended for four games for Deflategate — and then wasn’t, thanks to a federal judge in New York. Although Judge Richard Berman probably hasn’t upended the NFL season, make no mistake: the Patriots likely need Brady to make the playoffs.

Brady was one of the top quarterbacks in the NFL last season. According to Football Outsiders, his defense-adjusted yards above replacement (DYAR), a stat that measures a player’s performance versus a replacement player,1 was sixth in the league.

This year we expect Brady to regress from great to very good. Brady is old — he was born just a few months after “Star Wars” premiered, and I don’t mean Episode 1 — and his 2013 performance was not nearly as strong as last season’s. Even taking this into account, we project Brady to finish with a DYAR of 1,000 (which, in 2014, would have made him the eighth-best quarterback).

Meanwhile, Patriots backup Jimmy Garoppolo is the definition of a replacement-level quarterback. Last year, Garoppolo would have ranked 32nd in defense-adjusted value over average2 (DVOA) for starting quarterbacks, if he had thrown enough passes to qualify for the list.

Knowing how Brady and Garoppolo are forecast to play, we can see how substituting Garoppolo for Brady would have affected the Patriots’ chance of making the playoffs. 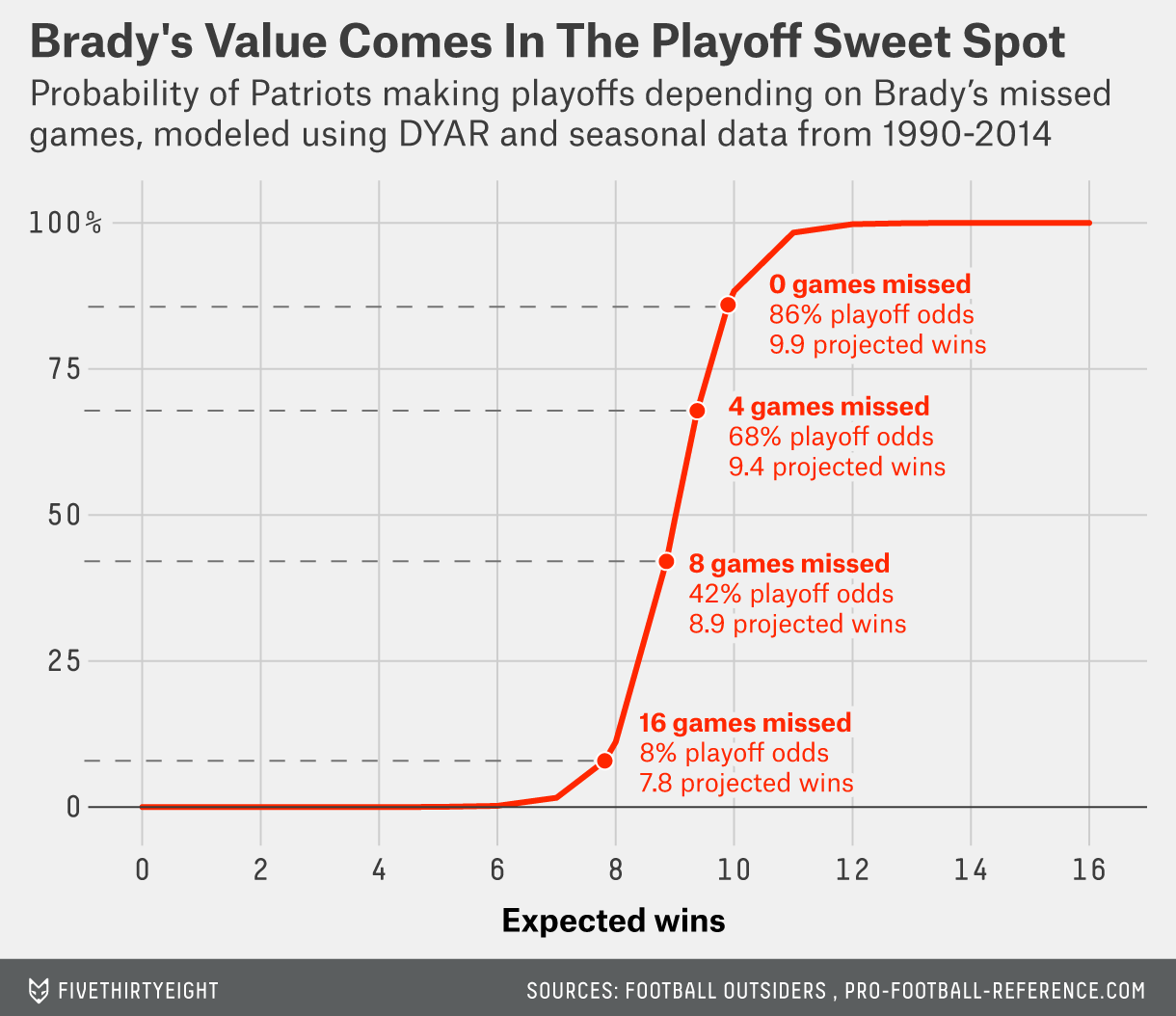 The Patriots are projected to win 9.9 games when Brady starts 16 games. (That number is different from the projected wins above because it’s largely based on DYAR, while the top-line team projections in FiveThirtyEight’s NFL previews use ESPN’s Football Power Index.) This estimate is based on the belief that the Patriots’ rushing game will remain as productive as it was in 2014, the receiving game will worsen slightly as Brady declines, and the defense will decline from last year with the departure of cornerback Darrelle Revis.

Even if Berman had upheld the Brady suspension, the Patriots would still be projected to win 9.4 games.3 Their playoff odds would have taken a big hit, though, dropping from 86 percent to 68 percent as they inched closer to 9 wins. That’s because that window between 9 and 10 wins is crucial for playoff odds: at 10 wins, a team is almost certain (88 percent) to make the playoffs, while a 9-win team is only a toss-up (49 percent).

The bottom line: the Patriots would have been solid even if Brady missed a few games, but they should count their blessings that he didn’t leave football to become Donald Trump’s running mate. Berman’s decision may have been worth only a half-win to the Pats’ bottom line, but it was a half-win that could mean the difference between New England mounting a serious title defense and watching the playoffs on TV at home.

When you think of an awful team in the AFC East, you probably think of the Buffalo Bills or the New York Jets. But don’t forget about the Dolphins. The team that plays south of every other NFL franchise has been headed in that direction since 2004.

Not too long ago, the Dolphins were a fixture in the postseason. Their longest stretch without a playoff appearance was four years, and through 2003 an 11-year rolling average of their seasonal winning percentage never dipped below .554.

The past 11 seasons, however, have been a wasteland. The Dolphins have made only one playoff appearance in that time (in 2008), and they quickly exited in the wild-card round. They have had only two winning seasons during this period, and their average seasonal winning percentage has been .420. That, of course, is the worst 11-year stretch in their history, and it’s only slightly better than the Bills’ .409 average seasonal winning percentage during the same period.

Why have they stunk it up? It’s not that they’ve been unlucky with a bunch of close losses — they’ve been blown out for much of that stretch, with a -31.7 point differential per season since 2004. Instead, the Dolphins have been bad because they’ve muddled along with a subpar offense and subpar defense, sometimes both.

Last year’s offense wasn’t so bad, but it wasn’t helped by a special teams squad that was the worst in the league, thanks in part to Caleb Sturgis ranking 28th in field-goal percentage. The kicker, in other words, was the kicker.

It’s déjà vu in Buffalo. When I wrote the AFC East preview last year, I said, “This season, the Bills try to end a 14-season playoff drought, the longest in the league.”

Well, make it 15 seasons. In typical Bills fashion, they decided to address their problems by altering everything about the team — except the problem area. The Bills’ biggest offseason change was the addition of Rex Ryan, a defensive-minded coach who’s inheriting a great defense. The Bills defense was second in the league last year, according to Football Outsiders’ DVOA rating, which tries to measure the true value of an offensive or defensive unit. In 2013 they ranked fourth.

Quarterbacks, not defense, have been the problem. The Bills are entering the season relying on fifth-year QB Tyrod Taylor. Taylor has never thrown a touchdown pass in the NFL, but he has thrown two interceptions. Taylor will almost certainly be the latest in a parade of Bills quarterbacks since 2003 who have ranked below the league average in DYAR. No other team has gone so long without at least one year of an above-average quarterback.

The lack of a decent quarterback has cost the Bills more than a win a year. Taking into account the Bills’ rushing game, receiving game and defense, and regressing it against wins, we can calculate that the Bills would have gained an average of 1.1 wins per season since 2003 just by having an average quarterback each year. Only the Bears (1.4 wins), Raiders (1.3 wins) and Browns (1.2 wins) would have improved more with the addition of an average quarterback during this period. That extra win each year may have meant two trips to the playoffs, in 2004 and 2014.4

If the Bills had an elite quarterback in all of those years, they would have picked up an average of 3.5 more wins each season. Depending on their opponents in those games, they might have made the playoffs seven times since 2003. If only they’d had their own Tom Brady to take over after Drew Bledsoe left.

Perhaps Taylor will be the answer Bills fans are praying for. Chances are he won’t be.

What’s that old saw about a team being who we thought they were? Because that’s the Jets. They finished last season with a 4-12 record, which led to the departure of general manager John Idzik and coach Rex Ryan. Vegas had given them an 80 percent chance of winning at least 5 games, but their disastrous season still wasn’t surprising.

Yes, they finished with an 8-8 record in 2013, but that was mostly luck. They were outscored that season by an astounding 97 points. Teams with this type of disparity between their point differential and record one year usually do considerably worse the next season.

It’s unusual for a team to be as consistent as the Jets, good or bad. Teams’ point differentials can fluctuate wildly from season to season. Over the past three years, the Jets had by far the smallest variance of any NFL team.

Why have the Jets been so bad? Their offense. The Jets’ offensive DVOA since 2012 has been horrible. Their average DVOA of 15.73 over the three seasons is the second-worst in the NFL, better than only the Jacksonville Jaguars. Put another way, the Jets offense has been as much below average as the Seattle Seahawks offense has been above average since 2012. Geno Smith is the bizarro Russell Wilson.