It isn’t nearly as important or anticipated as the final, but Saturday’s third-place match is good enough to be a World Cup final. It pits pre-tournament favorite Brazil against the Netherlands, which put up one of the two most impressive performances of the World Cup in routing defending champion Spain, 5-1, in the group stage. 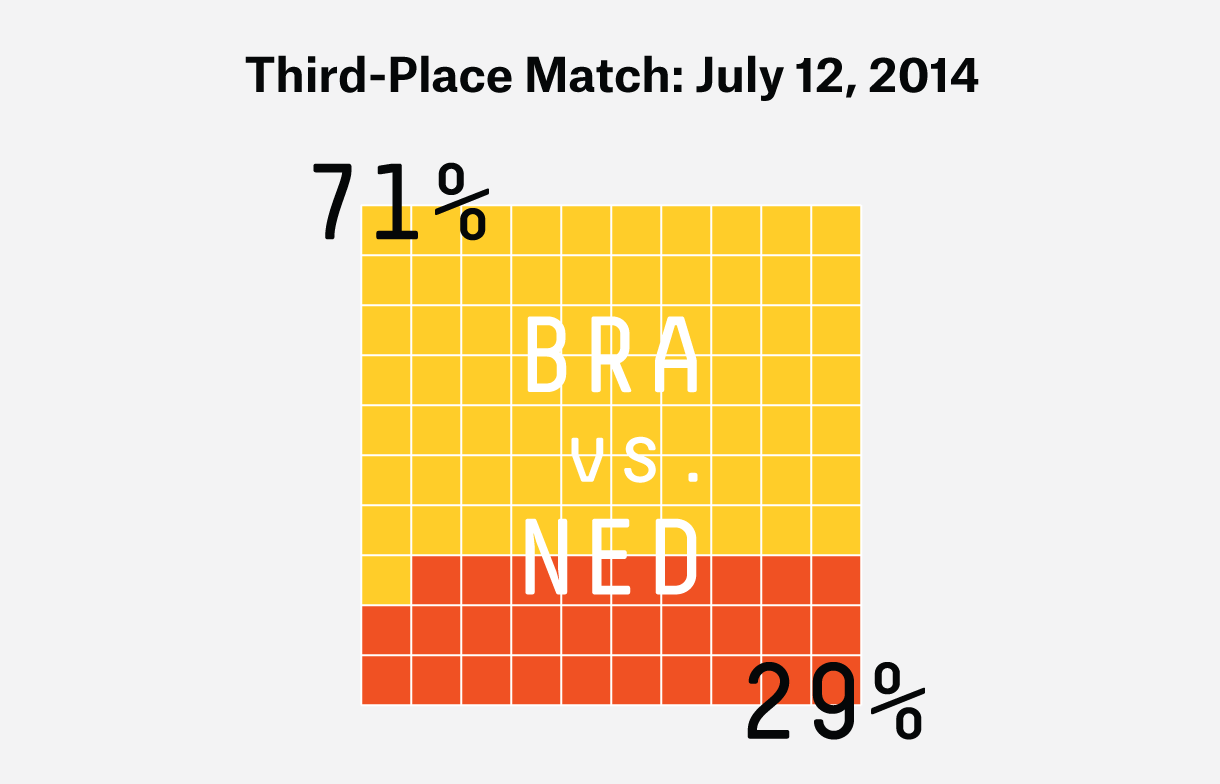 The other most impressive World Cup performance was Germany’s 7-1 semifinal rout of Brazil, which is the reason the hosts have to play in this warmup act. Although the score was embarrassing, the outcome — a shot at third place —  wasn’t so bad. Brazil lost to one of the best teams in the world and improved on its quarterfinal exits in the past two Cups. Spain, which flamed out (like some other defending champions), had a far worse tournament. By reaching the semifinal stage, Brazil guaranteed fans two more matches featuring its national team. And other World Cup hosts have played in the third-place match, most recently Germany in 2006 and South Korea in 2002.

In the Netherlands, Brazil has a worthy opponent. The Dutch have played in more finals than any other side to never win the Cup, a streak that will continue after their Wednesday loss to Argentina on penalty kicks. Now they can set their sights on a more modest goal: finishing third for the first time in their World Cup history.

OK, so the stakes are low and the match is being belittled as a “pointless sideshow” or “meaningless exercise.” But a match between these two teams doesn’t need high stakes to be watchable.

Without star striker Neymar and captain Thiago Silva, Brazil wasn’t as good in the semifinal as its top ranking in ESPN’s Soccer Power Index suggested. But it was nowhere near as bad as it looked against Germany. Now Brazil will have Silva back to help shore up its battered defense and to rally supporters behind his teammates.

The Netherlands, meanwhile, is coming off an embarrassing performance of a different sort. At least Brazil scored against Germany, while getting off 18 other attempts in 90 minutes. The Dutch, though, took just seven shots in 120 minutes against Argentina in their seminal match, and just one forced a save.

The silver lining of a low-stakes match is that neither team should feel pressure to play safe. If these two offenses — still rated two of the four best in the world by SPI — decide to attack, that should make for a great show, even if it is of the pointless-sideshow variety.

The Brazilians and the Dutch both had heartbreaking losses this week, but at least they can go to each other for consolation. The countries’ relationship is strong, dating to the days of the Dutch West India Company. Back then, when the extent of contact was months-long journeys by sea, trade was the only real connection. But times have changed, and travel between the two nations now consists of a 12-hour plane ride, meaning more opportunity to visit for pleasure. So how many Dutch and Brazilian citizens take advantage of this?

According to the Netherlands Board of Tourism and Conventions, about 102,000 Brazilians visited the land of tulips in 2011, and Brazil’s Ministry of Tourism reports that 72,162 Dutch traveled the opposite direction in the same year. When adjusted for each country’s total population, those travelers make up just 0.4 percent of Dutch citizens and .05 percent of Brazilians. Travel may be easier than it was in the 17th century, but it looks like 12 hours may still be a bit much to endure. — Hayley Munguia