The remaining World Cup semifinalists — Germany, Argentina and the Netherlands — all are titans of men’s soccer. Each ranks among the top seven sides in World Cup match wins, and in the top five in winning percentage among sides with at least four wins. Germany and Argentina each have won at least two Cups. And yet the Dutch have none, despite making more finals than champions England, France, Spain and Uruguay. The Dutch can take the first step in remedying that on Wednesday by following fellow European side Germany in upsetting a South American favorite. 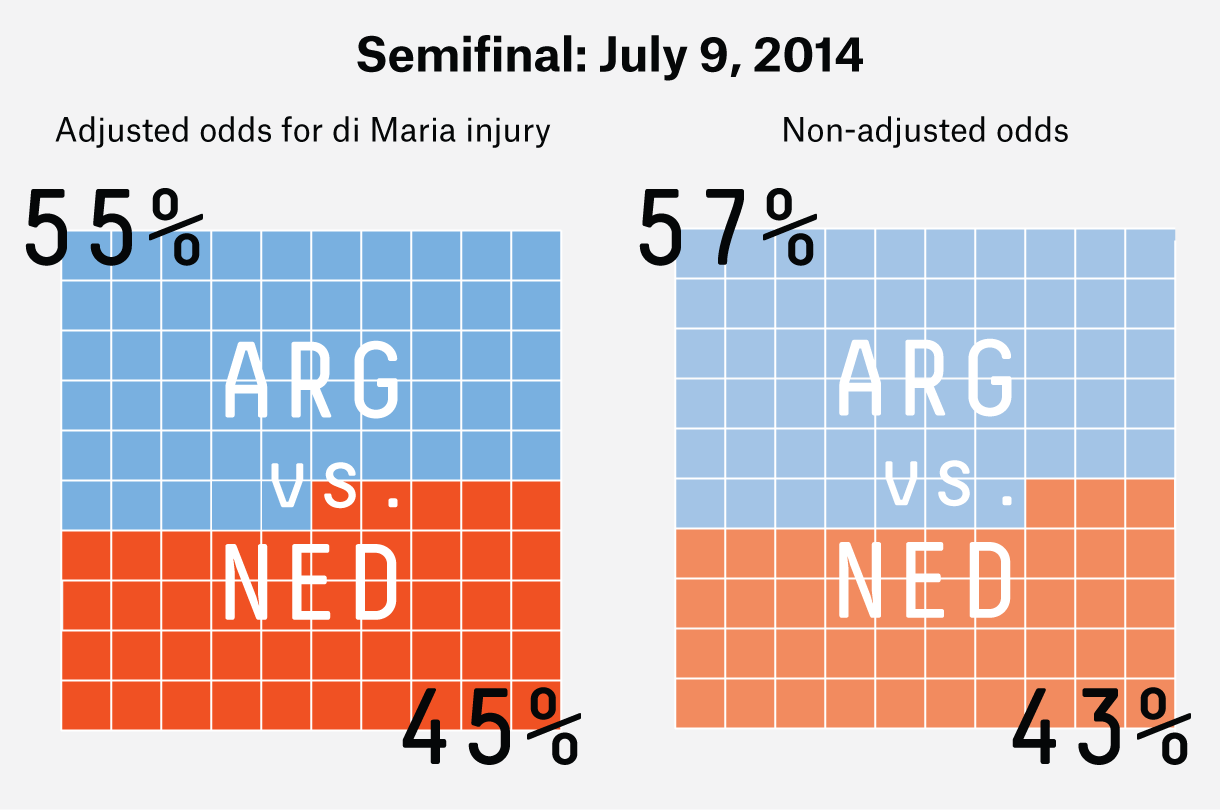 A month ago, this didn’t look like the year for the Netherlands. It had the roughest draw of the tournament and, by our model, less than a 50 percent chance of advancing to the knockout stage. The Dutch responded by producing the biggest shock of the 2014 Cup (until Germany’s rout of Brazil on Tuesday, that is) by blowing out defending champion Spain, 5-1, earning a relatively easy knockout-stage draw and cruising to the semis with the most goals and best goal differential of the final four.

Arjen Robben has been the Dutch side’s offensive engine. Through the quarterfinals he had more than double the number of solo runs into the penalty area of any other player in the tournament. And he’s tied for second in deliveries in the penalty area among active players. Argentina’s Angel di Maria has more, but he’s injured and will miss Wednesday’s match.

That leaves the impossible Lionel Messi atop this category. Without di Maria, Messi becomes even more central to Argentina’s offense, a proposition that didn’t seem possible.

Argentina remains a slight favorite in the match after accounting for di Maria’s absence. A South American team has won each of the prior seven times the Americas hosted the World Cup. Messi and Argentina remain the last hope to maintain that streak.

With hosts Brazil out of the way, this could be Messi’s best chance to add a World Cup championship to his otherwise sterling resume. He’ll turn 31 in the summer of 2018, an age of decline for the typical international soccer player. Pele and Diego Maradona were done winning World Cups before they turned 30.

Then again, Robben is 30 and might have thought his best chance to win vanished in the final four years ago, when he and his teammates lost in added extra time to Spain. Now he and the Dutch again are close to shedding the undisputed title of best team never to win the World Cup.

ESPN’s Soccer Power Index (SPI) gave Germany a 0.02 percent chance to score at least seven goals in its semifinal match against Brazil. If possible, general expectations gave it less of a chance than that. But Germany stamped its ticket to the final in impressive fashion.

Soccer may be one of the few things that Argentina and the Netherlands have in common. The Netherlands itself acknowledges the lack of cultural ties between the two countries. But in the realm of economic relations, differences are an asset. Both countries benefit from each other’s distinct economies, but Argentina gets the better end of the deal. Data from the Observatory of Economic Complexity shows that Argentina sent $4.4 billion of exports in the Netherlands’ direction in 2012, while just $764 million worth of goods flowed in the opposite direction. Both countries’ exports were indicative of their respective economies. Argentine goods concentrated in agricultural products such as oil, maize and bovine meat. On the flipside, the Netherlands’ more industrial economy sent Argentina mostly health-related chemicals and products, closely followed by machinery used for purposes such as heating, cooling and food-processing. — Hayley Munguia