The first day of multiple games is here. Have limited time and not sure which match to watch? Don’t fret. 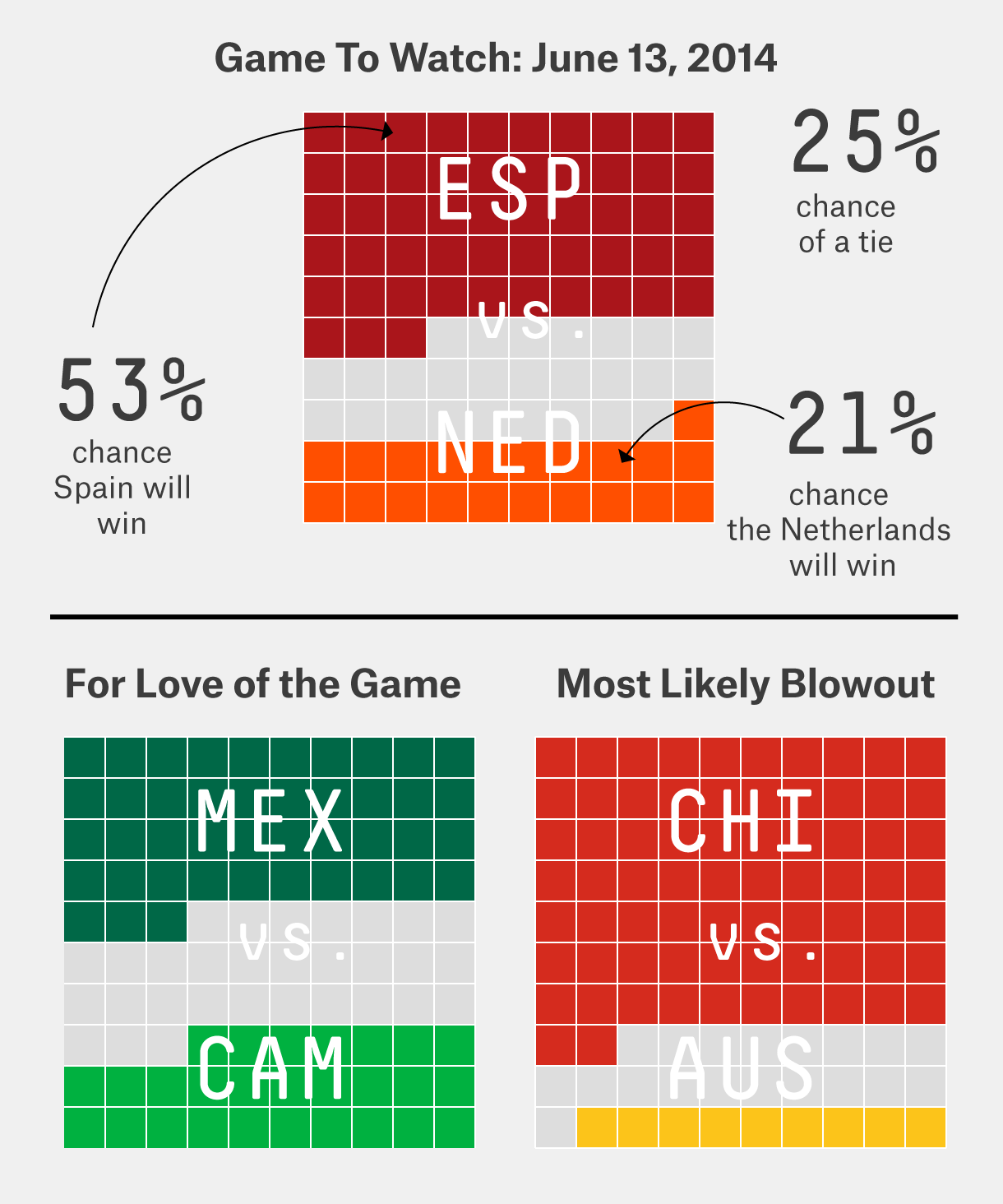 Two of today’s three matches feature two of the worst sides in the tournament: Cameroon and Australia. Fortunately, the third match is a replay of last World Cup’s final, Spain versus the Netherlands.

But viewers’ good luck is the Dutch’s misfortune. No team got an unluckier draw than the Netherlands. It’d be the strongest side in Group H. Instead, it’s more likely than not to exit the tournament before the knockout stage. Before the World Cup started, the Dutch were the 10th-best team of the 32 in Brazil, according to our World Cup model, based on ESPN’s Soccer Power Index (SPI). Yet they had just the 18th-best chance of advancing out of their group, only slightly better than the chances for South Korea, the sixth-weakest team in the tournament.

It all could have been very different. If Jordan had beaten Uruguay in a qualifying playoff match, the Netherlands would have been seeded in the World Cup draw, protecting it from having to face another top-seeded team in the group stage. Instead, the Dutch were the last team out when the seeds were announced in October, falling just 0.2 percent behind the lowest-ranked seed, Switzerland, in the FIFA rankings that month. The December draw spelled likely doom for the Dutch: Not only did they draw defending champion Spain, one of the four strongest seeds, but also Chile, probably the toughest non-seeded team the Netherlands could’ve matched up with.

If the Netherlands, as expected, fails to reach the knockout stage, it would be the second consecutive loser of a World Cup final to exit the next Cup after the group stage. France failed to advance out of the group stage of the 2010 World Cup in South Africa, losing two games and tying a third. That was just four years after the French lost on penalties to Italy in the 2006 final.

The six prior losing finalists, though, all reached the knockout stage.

Three reached another final, and two won. To have a chance to match those feats, the Dutch might have to reverse the result of the 2010 final and beat Spain on Friday. The Netherlands has a slightly better than one-in-five chance of doing so, according to our model.

How many Spaniards will be rooting for their home country from a pub in Amsterdam on Friday? And how many Aussies will be cheering the Socceroos from Chile? Bilateral migration statistics from the OECD’s International Migration Database report that just over 20,000 Dutch citizens (20,273, to be exact) have immigrated to Spain in the five years from 2007 to 2011, compared to 13,278 Spaniards flowing the other way. Adjusting for the size of the home country, Spanish migrants make up a larger share of the Netherlands’ population than vice versa.

Chileans and Australians have much lower levels of bilateral emigration: 1,068 Chileans migrated to Australia, with only 755 moving in the other direction. But these are huge movements compared to the number of Mexicans who have migrated to Cameroon over the same period: 73. (Unfortunately, the OECD database does not track Cameroonian migrantion data, so we don’t know how many people from Cameroon have moved to Mexico.) — Andrew Flowers