In basketball, it’s a safe bet that the United States men’s national team would defeat even the best NBA teams more often than not. Likewise, it’s hard to imagine any single NHL squad being favored against the Canadian national hockey team, if there were ever an occasion for them to face off. Yet it’s pretty conventional wisdom in soccer circles that the best teams in the Champions League, the world’s top club-level competition, are better than those in the World Cup, soccer’s premier international tournament. That’s because thanks to the economics of soccer, it’s possible for clubs to assemble all-star teams even in the absence of All-Star Games.

Intuitively, it’s not hard to see why. Unlike basketball and hockey, where global talent is concentrated in a relatively small number of countries, soccer is a sport played at a high level across a much wider and more diverse set of locales. Talent is then naturally more diluted at the international level. The most important club soccer leagues also lack North American-style salary caps, so the richest club teams are (checkbooks willing) free to accumulate a far greater amount of talent than any national team can.

I went to the spreadsheets to settle this debate, and, based on my calculations, the conventional wisdom is indeed wise — to a certain extent. The top club teams in the world as a group are superior to the national teams in this year’s World Cup field. But even so, teams that are the cream of the international crop are not as far behind their club-level cousins as managers like Alex Ferguson and Arsène Wenger would have you believe.

One way we can test this is to use the individual plus/minus player ratings that underlie ESPN’s Soccer Power Index (SPI) rankings. We’ve been over the gory details of those ratings before, but here are the basics: In addition to using head-to-head results from international matches, SPI also attempts to measure the talent level of every team based on the skill of its component players. To that end, each player is assigned a per-minute effect rating determined both by his individual statistics and by how his team performs with him in the lineup (compared to its performance without him). ESPN’s Stats & Info team computes this for both national and club teams, provided the player’s club is in one of the “Big Five” European leagues1 or appeared in the Champions League.

These numbers give us a player’s approximated influence on his team’s rate of scoring and preventing goals. For instance, Lionel Messi, the impossibly good attacker for Barcelona (on the club side) and Argentina (in this World Cup), is estimated to add 0.62 more goals per 90 minutes than an average player on offense, and save 0.03 more goals per 90 minutes than the average player on defense, for a net value of 0.65 goals per 90 minutes. (Nobody tops Messi among players with any kind of playing time over the past two seasons, although Messi’s longtime rival Cristiano Ronaldo is a close second at 0.63.)

If we aggregate these ratings for an entire roster, weighting by the number of minutes each player was on the pitch,2 we can derive an SPI-like number to describe the amount of talent on any team, whether it plays for club or country.3 And according to these numbers,4 the three best club teams in the world — Real Madrid, FC Barcelona and Bayern Munich — are a cut above the best national teams. But, in turn, the four most talented national teams — Brazil,5 Argentina, Germany and Spain — are solidly better than the next tier of club teams, a group that includes Manchester City, Paris Saint-Germain and the Champions League runners-up, Atletico Madrid. 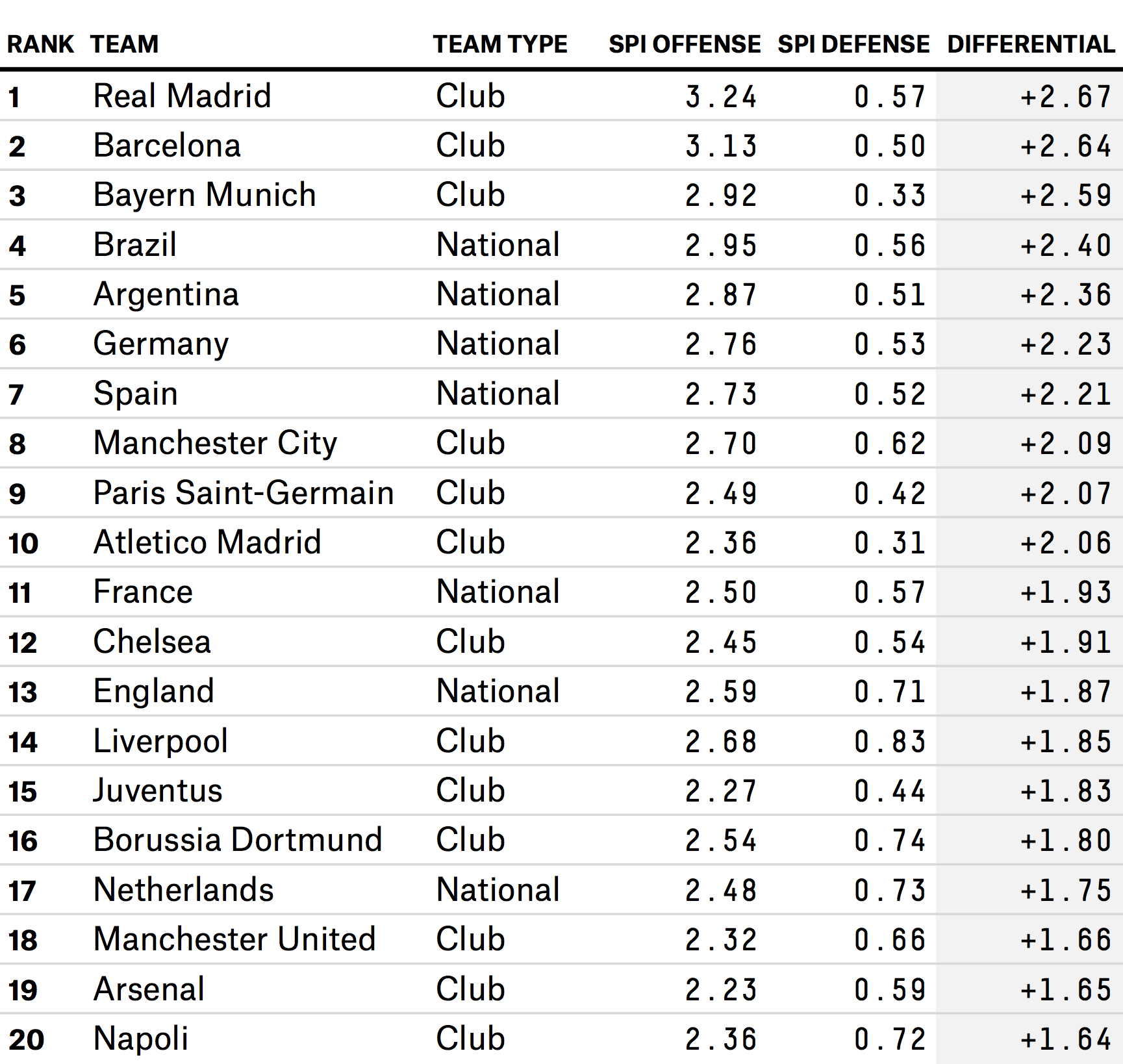 According to these numbers, Messi’s club team (Barcelona) would win 56 percent of its matches against his national team (Argentina) if they somehow played in a knockout setting at a neutral location (this model obviously assumes a dramatic development in cloning technology). But Argentina would be expected to win 56 percent of its matches against Manchester City or Atletico Madrid under similar circumstances. The top national teams would be favored (or at least evenly matched) against all but the world’s very best club teams.

Perhaps this shouldn’t be overly surprising. I combined Transfermarkt values for every player on this year’s World Cup rosters6 with Transfermarkt’s list of the 100 most valuable club teams in the world and found a similar pattern. A handful of club teams dominate the list of most valuable teams,7 but after that it’s a relatively equal smattering of club and national teams rounding out the top 20.8 The top-tier national teams at least appear capable of standing toe to toe in talent against most of the leading clubs in the world.9 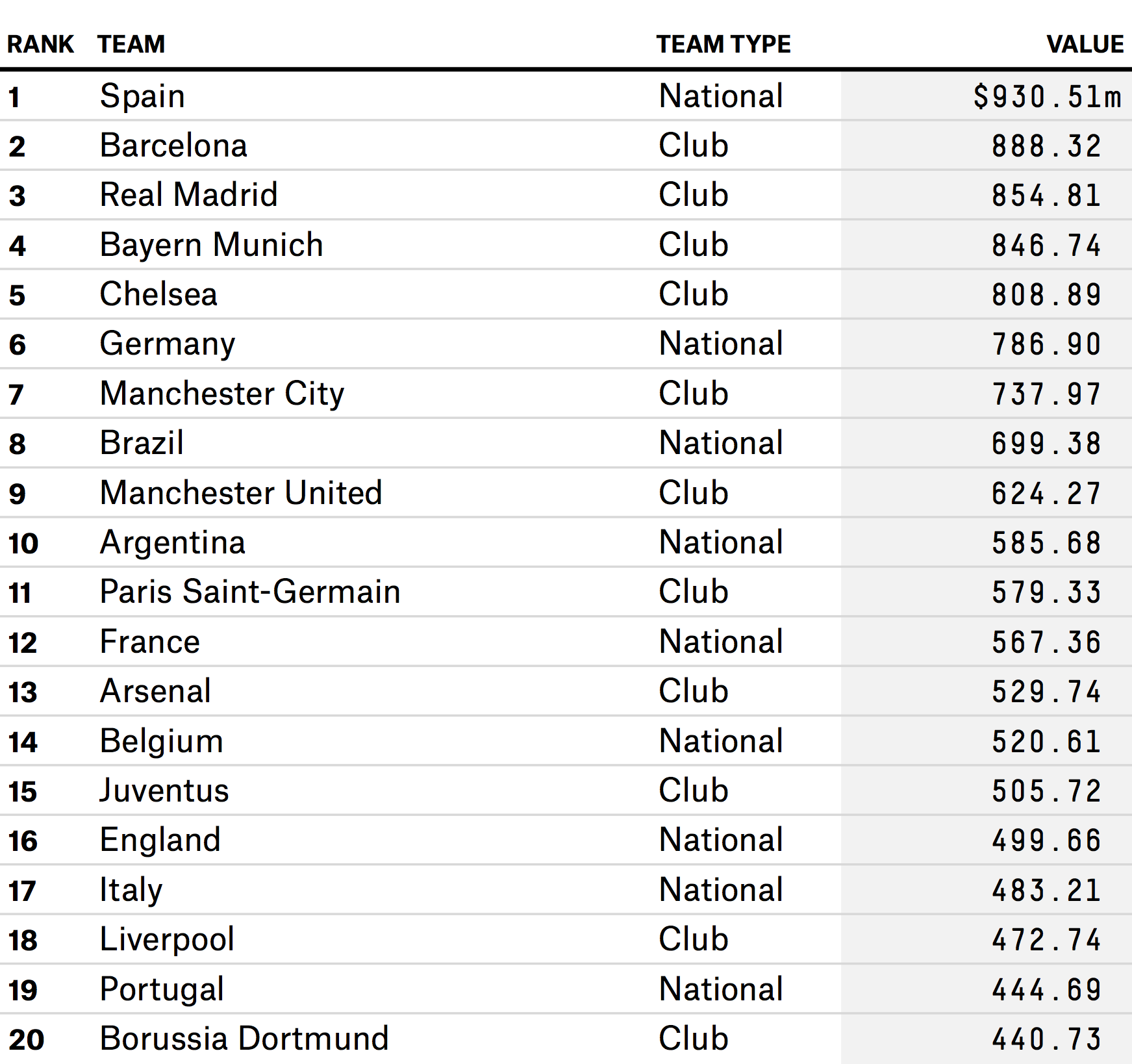 But aside from that top tier, national teams just can’t keep up with their counterparts on the club side. According to both the SPI talent ratings and the Transfermarkt valuations, there are about 10 or so national sides capable of contending with the top 10 club teams in the world. After that, the supply of strong national squads quickly starts to dry up. Based on the SPI estimates, the 15th-best national team in the world (Ivory Coast) would have just a 40 percent chance of beating the 15th-best club team (Benfica of Portugal’s Primeira Liga), and only a 21 percent probability of beating Real Madrid. According to SPI’s player ratings, 33 of the 50 most talented teams in the world are club teams.

In that sense, pundits are right when they contend that the quality of play in a circuit like the Champions League is higher than that of the World Cup. Certainly it’s hard to argue that the worst teams in the World Cup’s group stage would be able to consistently compete with their counterparts in the Champions League group stage. But in its later rounds, the World Cup contains teams — like the German and Argentine squads that will face off in Sunday’s final — whose rosters rival almost any in the sphere of big-time club soccer.