Last week I wrote “Lionel Messi Is Impossible,” an article that explored how play-by-play data sheds light on the Argentina forward’s skills, style and value (spoiler: he’s good). Many readers asked if I could do a similar analysis comparing Messi with all-time greats, particularly Argentine legend Diego Maradona (who played on the winning 1986 World Cup side) and Brazilian great Pele (who helped his country win the Cup in 1958, 1962 and 1970).

Ask and you shall receive. Opta, the soccer analytics company, has compiled touch-by-touch data from World Cups going back to 1966, meaning all of Maradona’s World Cup tournaments and two of Pele’s have been logged. This gives us 21 Maradona and eight Pele games to analyze — certainly a small sample, but informative nonetheless.

I’ll note before I begin that I’m not usually a fan of cross-era comparisons. Today’s athletes aren’t playing the same game as yesterday’s. Strategies, styles and even rules change dramatically from decade to decade, and in most sports other than horse racing, modern athletes would crush historical greats. It’s easy to think that the dominant players of the past would be just as effective as their modern counterparts with current training, conditioning, etc. — but I’m not buying it. Historical greats frequently dominated a smaller pool of players or excelled in an immature game. And there’s no guarantee that their previous success means they would respond well to modern training techniques or would fit into the modern game.1

But cross-era comparisons can still be worthwhile when the circumstances are right. Those circumstances, from most to least useful:

The Messi vs. Maradona debate falls somewhere between Nos. 1 and 2. But Messi vs. Pele is somewhere between No. 3 and No. 4. Although we have only eight games in the data set, Pele’s fine-grained statistics over this sample are remarkable. And unlike Maradona, whose career production doesn’t quite match Messi’s (e.g., Maradona had 346 combined club and international goals in 679 career appearances, while Messi already has 407 goals in 548 appearances), Pele’s macro-level stats are formidable. While record-keeping wasn’t as good in the 1950s and ’60s, and there were all kinds of odd unofficial matches, Pele had at least 757 goals in 812 “official” matches — a higher goal-to-appearance ratio than Messi overall — and his peak seasons were even better. For example, in 1961 Pele scored 62 goals in 38 appearances (1.63 goals per appearance!) for Santos FC, the Brazilian club team where he spent most of his playing career.

To make the fairest possible comparisons, I’ve used two sets of Messi games to isolate his World Cup play from his high-level club play. “Messi-A” is all of Messi’s games in the Opta data set for Argentina (get it? “A” is for Argentina) either in World Cup or World Cup qualifying play (so no international friendlies or the like), going back to 2006.2 “Messi-B” is all of Messi’s games since the 2010-11 season that Opta covers for Barcelona (“B” is for …) in UEFA Champions League games only — the highest level of competition he faced in club play. Here’s the top-line breakdown:

On a game-by-game level, Pele leads Messi and Maradona in goal production by significant margins. Even Messi’s UEFA numbers, while stellar, don’t match Pele’s.3 Pele’s five goals in eight games are a bit below what we would expect given what we know about his goal-scoring in other contexts (for example, Pele scored seven goals in his five previous World Cup games). And, importantly, Pele’s assist rate gives us a rare glimpse into that aspect of his game. If he was nearly as good at distributing the ball over his career as he was during these two World Cups, his value may have been even greater than we previously thought.

But let’s zoom in a bit closer, going from the game-by-game data to the play-by-play data. First, let’s look at our “four” players’ shooting. The Opta data set has x-y coordinates for each shot, which means we can see the shot charts for all of them.4

First is Messi-A, playing with Argentina in all World Cup or World Cup qualifying matches. (Note that this includes three goals from penalty kicks.) Second is Messi-B, playing in UEFA Champions League games for Barcelona: 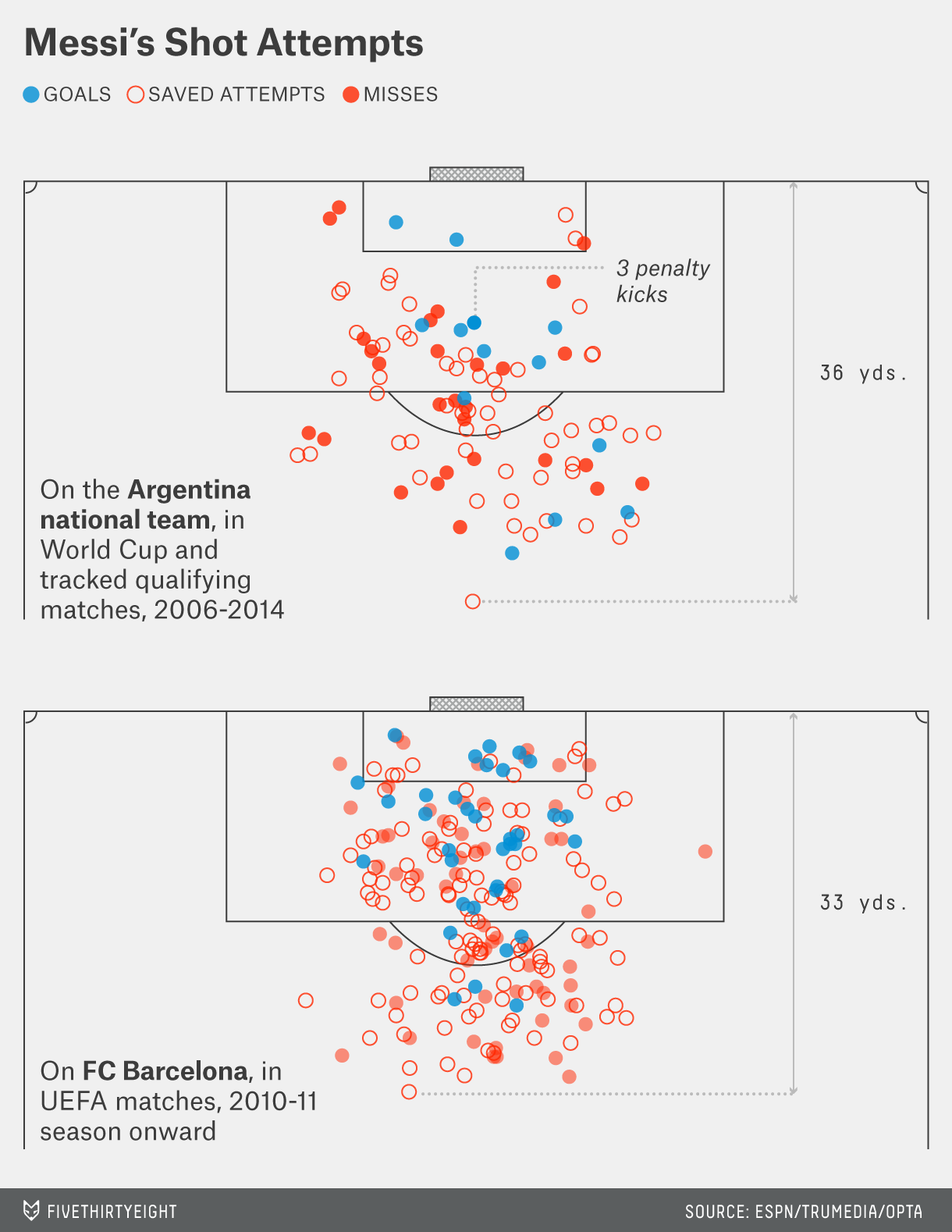 The Barcelona chart includes seven goals from penalty kicks. The main thing that sticks out is that compared to Messi-A, Messi-B takes fewer shots from distance and has been less successful with them. 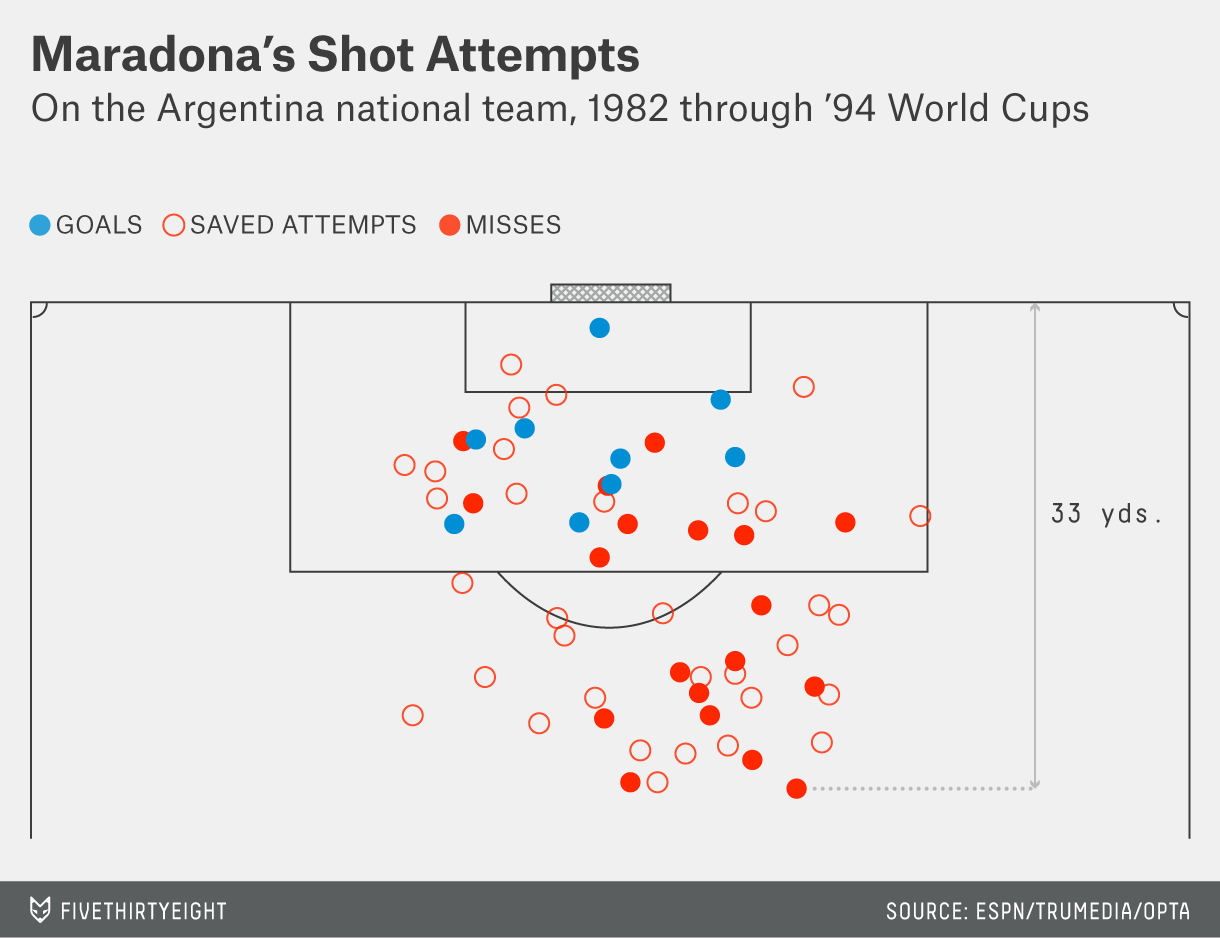 Maradona was abysmal from distance! But he made a very high percentage of shots inside the box; none of these was a penalty. 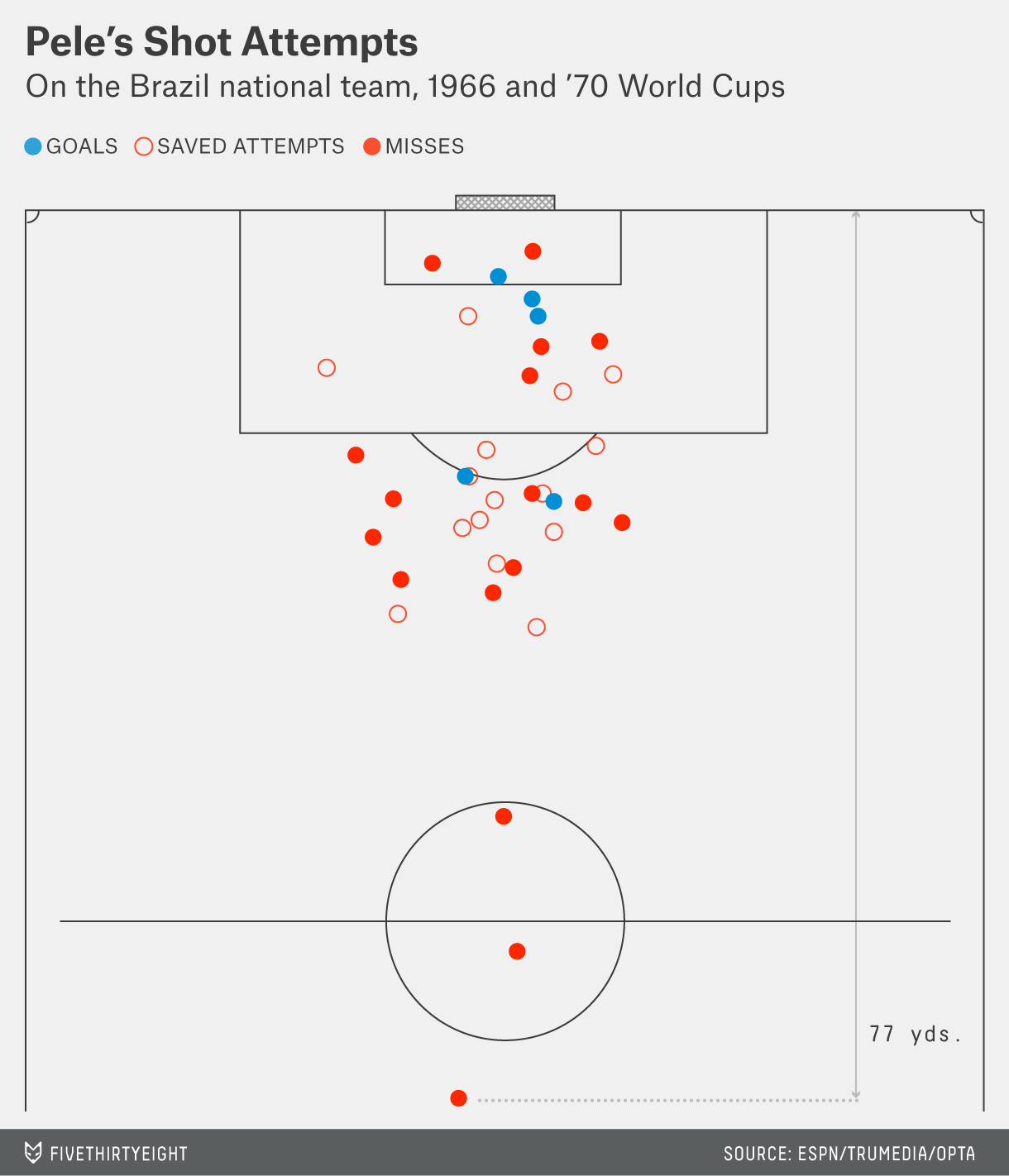 Pele loved to launch it from long-range, and appears to have done so pretty well. However, I’d note that both of these goals were on direct free kicks, meaning neither he nor Maradona scored from outside the box on regular “open” plays in this data (something that is kind of Messi’s specialty).

Here’s how those charts break down in numbers (excluding penalty shots):

Messi-B wins this competition overall, though largely because of Pele’s affection for long attempts. Pele hit a higher percentage both inside the box and outside it, but ended up with a lower shooting percentage because he took over two-thirds of his shots from distance.5

Now let’s turn to dribbling skills. Of the play-by-play stats I used in my Messi study, one of my favorites was the “take on” or “1v1” stat, where we found that Messi takes on defenders one on one more than any forward tracked in our data set, and with a higher success rate. So, naturally, this is one of the first things I looked up in the historical data:

Maradona took on defenders even more zestfully than Messi, and was slightly more successful in doing so. Pele, however, was almost as successful, though he made far fewer attempts per game. I should note, though, that taking on defenders was both more common and more likely to be successful in Pele’s and Maradona’s eras, so this may be a bit of an historical anomaly. In UEFA matches since 2010, teams had an average of about 18 “take on” attempts per game — succeeding 44.8 percent of the time. That’s less than the 21 or so per game by World Cup teams in the Pele and Maradona years; those players succeeded 49.4 percent of the time. Messi appears to be the greater outlier (especially if you consider La Liga, where he succeeds in one-on-one attempts 55.3 percent of the time, while the typical success rate is only 35.6 percent). My main inference from all of this is that defenses are probably tougher these days, which perhaps should affect how we interpret the other comparisons as well.

Another area where Messi seems to have the edge is in passing accuracy and success rates. For this I’ll look at each player’s overall pass completion percentage and the “success” rate of his passes (that is, how often the pass leads to a “successful” play by the receiving player, such as a shot, or another pass):

Both Messis attempt more passes than Maradona or Pele did, and both have higher completion percentages and success rates, though Pele’s stats look remarkably similar to Messi-A’s.

That final stat, “touches with ‘successful’ pass,” basically tells us how often the player successfully extends his team’s possessions. But how do things go down when he uses the possession himself?

To find that out, I slightly tweaked the “Possessions Used” stat I created in my previous article. First, to avoid any skew, I limited what qualifies as a touch to regular, open (non-set-piece) plays only. Each time a player did something that ended a possession, I logged one of three different outcomes: a lost ball (when a player was dispossessed, turned the ball over, failed in a one-on-one attempt, or passed to someone who lost the ball before managing to get off a shot or pass); a missed shot or chance (either the player missed a shot, or the player whom he set up to take a shot missed); or a goal (whether by the player’s own shot or an assist). As before, possession-extending events like successful one-on-ones don’t count themselves, though they may affect the relative likelihood of each outcome (e.g., successfully taking on a defender would presumably be reflected by scoring or assisting more goals). And passes that are successful but don’t immediately lead to shots don’t count as possessions at all. Our players compare like so:

Of these “four” players, Pele produced the most goals (through shots and assists) per possession, with Messi-B slightly behind, Messi-A a little further back, and Maradona coming in a respectable fourth. Pele was also much more likely to take or create a shot attempt that missed than to lose possession of the ball any other way, which likely had secondary advantages (as missed shots often lead to rebound attempts, corner kicks, etc).

Let’s recap the ways that Pele’s numbers stack up to Messi’s:

I don’t mean to suggest that this proves Pele was better than Messi: In addition to the historical comparison issues I mentioned, we prefer not to draw conclusions from just eight games of data.

But sample size isn’t a death knell in Bayesian analysis. While the 21 Maradona games are also a relatively small sample, that sample is probably large enough for us to conclude that Messi is likely the better player (though not necessarily as valuable to Argentina writ large) for two reasons: First, Messi comes out ahead of Maradona fairly consistently and by fairly good margins, and second, the data conforms with what we know of their broader careers, and what we would assume based on Messi playing in a stronger era.6

But with Pele, we have essentially the opposite scenario. As amazing as Messi’s numbers are — from the career level down to the touch-by-touch level — Pele essentially matches or exceeds them stride for stride. So the thing those eight games confirm is the lack of a conclusive gap between Messi and Pele. In other words, we’ve precluded a simple answer to the Messi/Pele question: If Messi were a substantially more dominant player (even for his era), it would be very unlikely that we’d see results like these.

I hope more Pele data emerges, so that we can get a better sense of how dominant he really was, and whether these eight World Cup games were consistent with his overall play (we should expect some regression to the mean just because they’re so good to begin with). But Messi has an opportunity to improve his standing: He’ll be adding more data to his sample Wednesday afternoon, and for many years to come.