On Saturday, 19 thoroughbreds will once again be off, running in the 140th Kentucky Derby. The Derby calls itself “the greatest two minutes in sport” because that’s more or less how long it takes to win the race, and that hasn’t changed in decades. Since 1949, the time it takes thoroughbreds to run around the 1.25-mile track has averaged 2:02.25, and no winning race time has deviated by more than 3 seconds from this long-term average. 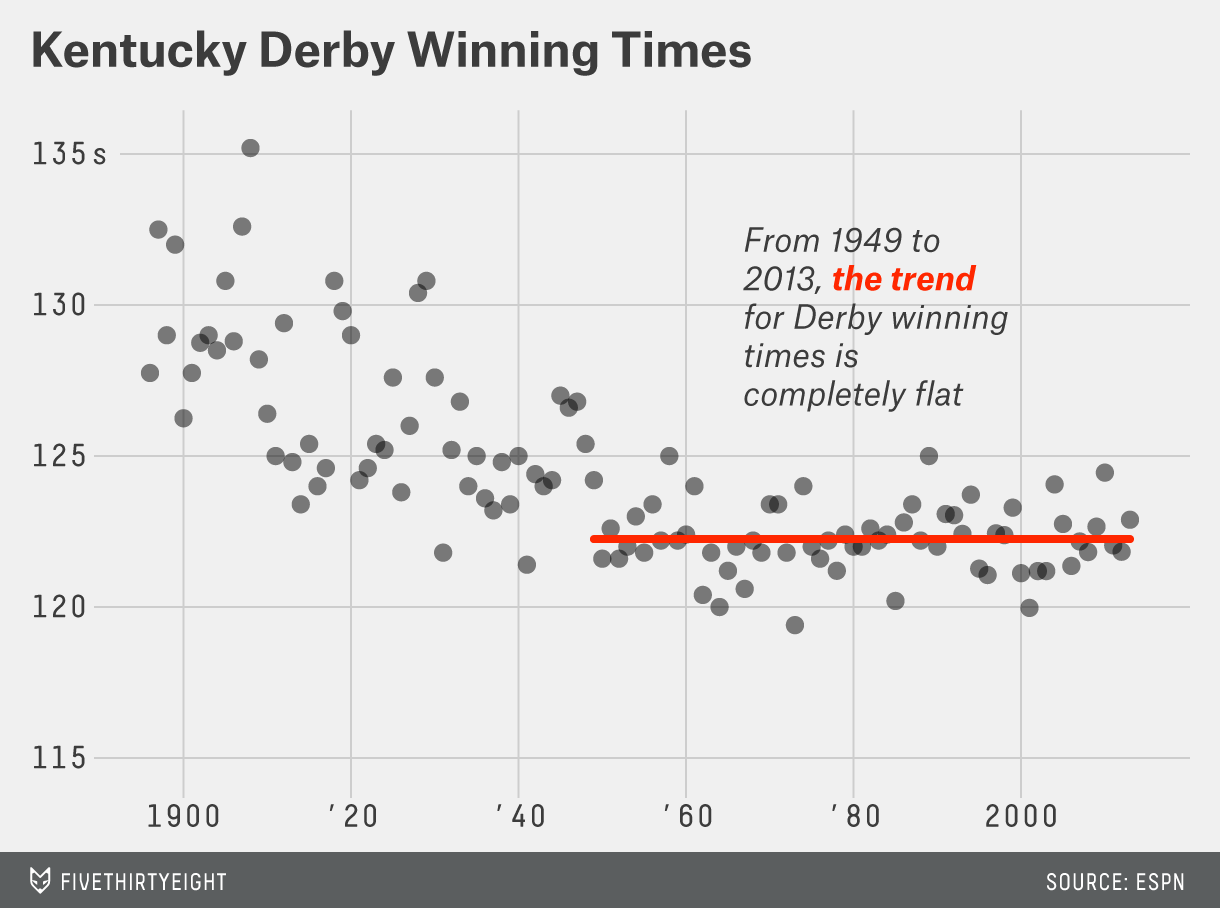 Mark Denny, who studies biomechanics at Stanford University, wrote a 2008 paper that asked, “Are there absolute limits to the speed at which animals can run?” He looked at the statistics of the fastest times each year for the Triple Crown horse races (which include the Preakness Stakes and Belmont Stakes in addition to the Kentucky Derby), three premier greyhound races in England, and elite men’s and women’s athletics at distances of 100 meters to the marathon.

The data reflected remarkable achievements by the fastest horses, dogs and people. Denny fit the data with a statistical model, and then used extreme value theory (since the data was about the best in each sport) to calculate a maximum speed limit.1 Some race times, like the Kentucky Derby’s, have plateaued, while others are still improving, like the men’s 100-meter race. This approach suggests that the fastest time possible for a human in a 100-meter race is 9.48 seconds. Usain Bolt’s world-record time is only 0.10 seconds from the limit.2

Denny says his approach tells us “that speed has its limits, but not what accounts for those limits.” There are, however, a few possible explanations for why thoroughbreds may have already hit those limits but humans, for the most part, have not yet plateaued.

One possibility, advanced by Denny and others, is that thoroughbred race times may have leveled off because the narrow genetic diversity of racehorses limits the genetic diversity in the pool of potential thoroughbred champions. Modern thoroughbreds are descendants of a small number of horses (less than 30 in the 18th century), and 95 percent are thought to trace their ancestry to a single horse, The Darley Arabian. Today, there are fewer than 25,000 thoroughbreds born each year in the United States. Compare that with the more than 7 billion people worldwide.3 The size of the human population may simply lead to a greater number of potential athletes with extreme speed.

And humans could be even faster if we didn’t engage in any other athletic pursuit aside from racing. David Epstein wrote in his book “The Sports Gene” that while it’s unclear whether speed is innate or nurtured, one important reason for Jamaican athletes’ success in short-distance races is that in their country, “every kid is made to try sprinting at some point.” In the United States, at least, many of the fastest runners are lost to other sports, and thus never have a chance to reach their potential as runners. Epstein cites Trindon Holliday, now a kick returner for the New York Giants, who in college outran future Olympic bronze medalist Walter Dix at 100 meters at the 2007 USA Outdoor Track and Field Championships. Who knows how fast Holliday might have become as a full-time professional sprinter? Humans who race also have many opportunities to train, specialize, experiment and innovate. Those efforts are apparently still bearing fruit in some track and field events.

Even if racehorses aren’t getting faster in general, assuming random variation in the speed of the very fastest horses would mean that we haven’t yet seen the fastest horse. Denny’s calculations suggest that the current Kentucky Derby record time of 1:59.40 in 1973, held by the legendary Triple Crown-winner Secretariat, could be beaten by as much as 1.5 seconds.4 But theory and reality are different things. Denny concludes that Secretariat “may represent a good approximation of the ultimate individual thoroughbred.”

Of course, any extrapolation from observed statistics are based on important assumptions, and Denny admits that his are, too. On the one hand, he concludes the data from the Triple Crown races indicates that “the process of selective breeding of thoroughbreds (as practiced in the U.S.) is incapable of producing a substantially faster horse.” But breeding practices could change, Denny notes, and perhaps greater genetic diversity in horse breeding would create thoroughbreds with faster potential speeds.

Going even further, it’s also possible that a horse could be genetically engineered to run faster. Horse racing has already taken a step in this direction via the cloning of thoroughbreds. The acceptability of cloning racehorses has been controversial for more than a decade, and in 2007 the international body that oversees horse racing banned cloned thoroughbreds (and, of note, cloned jockeys as well) from international competition. But in 2012 the ban was lifted, apparently for horses only. Imagine a future Kentucky Derby with the participation of cloned replicas of Secretariat, Sea Biscuit and Man ‘O War. Or even a race with identical cloned thoroughbreds in multiple lanes, to showcase the trainers’ and jockeys’ efforts.

So to return to Denny’s research question, “Are there absolute limits to the speed at which animals can run?” The answer is yes. A more important question: How far are we willing to go to reset these limits? “The greatest one minute and 50 seconds in sports” doesn’t roll off the tongue quite as smoothly.