In reading the polling trends, it matters which baseline you compare them against. Compared with a month or so ago, the situation doesn’t look so bad for Democrats in Georgia: Michelle Nunn’s chances of winning there were 28 percent Sept. 30, according to our forecast, and they’re 26 percent now. She still has a chance. Her chances haven’t faded toward zero as those of some other red-state Democrats (like Alison Lundergan Grimes’s of Kentucky) have. 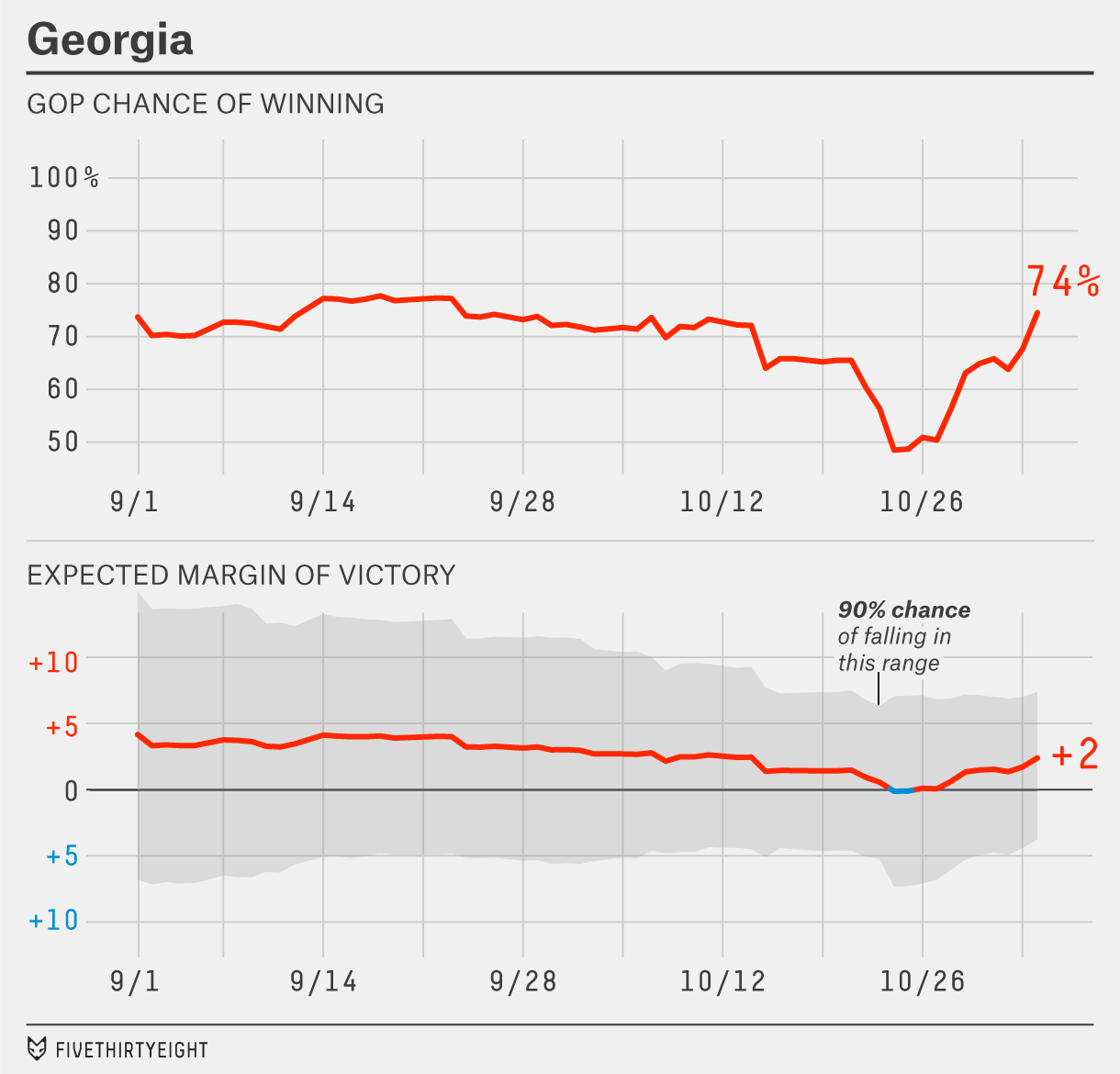 But Nunn’s chances have slipped in recent days. After a string of polls in mid-October put her slightly ahead in her race against Republican David Perdue, the past 12 polls we’ve added to our database — including four Monday morning — have had Nunn tied or (more commonly) behind.

The Georgia race is complicated by the possibility of a Jan. 6 runoff if neither candidate gets to 50 percent of the vote Tuesday. Previously, it looked as though Nunn was hoping to avoid a runoff, which might feature less favorable circumstances for her than Tuesday’s ballot. Now her best hope may be to keep Perdue below 50 percent of the vote and extend the race.

FiveThirtyEight projects Perdue to get 49.7 percent of the vote Tuesday, Nunn to get 47.7 percent and Libertarian Amanda Swafford to get 2.6 percent. Swafford’s standing has slipped slightly in recent polls, from about 4 to 3 percent. Furthermore, our research has found that third-party candidates polling in the low-to-mid-single digits often slightly underperform their polls on Election Day. (This property is accounted for in our projection of Swafford’s vote share.)

Of course, there’s uncertainty in that forecast. Perdue is close to enough to 50 percent of the vote that he could fairly easily surpass it and win outright Tuesday. Specifically, our forecast gives him a 44 percent chance of doing so. Nunn, however, would need to beat her polling projection by 2 to 3 percentage points. There’s only about an 8 percent chance of that. The other 48 percent of the time, the race will go to a runoff. 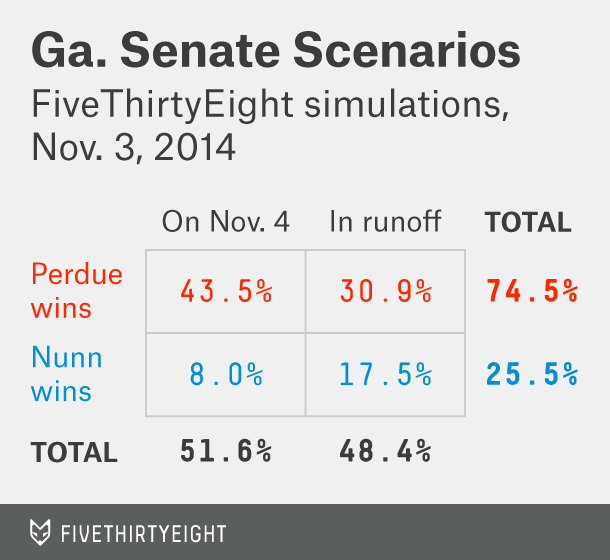 What would Nunn’s chances be in that event? There are two complications in figuring this out.

First, we’d have two more months of campaigning. That increases the degree of uncertainty. Perhaps Nunn could find a new line of attack against Perdue. Perhaps Perdue would trip himself up, as he nearly did in October after comments he made about outsourcing. Or maybe Nunn would lose by 12 points. But higher uncertainty is good news for the trailing candidate.

The other complication is even wonkier. Conditional upon the race going to a runoff, Nunn will probably have slightly beaten her polling forecast Tuesday. Nunn trails Perdue by 2 percentage points in the FiveThirtyEight forecast. If she does any worse than that, her margin of defeat could be larger than Swafford’s vote share, which means Perdue would win the race outright. But if she does a little better Tuesday, she’ll secure a runoff.

Put another way, the race in Georgia will only go to a runoff if it was very close to begin with. And that suggests a runoff would be close as well. (The model assumes there’s some correlation between the Nov. 4 and runoff outcomes.) Thus, the FiveThirtyEight forecast gives Nunn a 36 percent chance of winning a runoff conditional upon one occurring — better than her chances of winning Tuesday.

She’d be an underdog, but it would be comparatively good news. If one candidate wins outright Tuesday, there’s a better than 80 percent chance it will be Perdue.

CORRECTION (Nov. 4, 12:23 p.m.): A previous version of the first chart in this post showed the incorrect confidence interval.