The numbers are the numbers. There’s nothing sacred about 51 percent or 72 percent or 95 percent. But certain probabilities, I’ve found, are harder to translate into the right words. For most of 2014, Republicans’ probability of taking over the Senate has been somewhere in the neighborhood of 60 percent, according to the FiveThirtyEight forecast. The gambler in me says that’s not quite close enough to describe as a “tossup”; you’d make a lot of money over the long run betting on a coin toss weighted 60-40 to your side. But it still represents a highly doubtful outcome. A 60 percent chance of an outcome occurring means there’s a 40 percent chance of it failing to occur. As 60-40 underdogs, Democrats’ chances of keeping the Senate would be about as good as Ted Williams’s chances of getting a base hit in 1941.

Over the past week or two, the FiveThirtyEight forecast has drifted slightly more toward Republicans. As of Wednesday night, the GOP’s chances of a Senate takeover were up to 66 percent, its highest figure on the year.

Sixty-six percent might seem a lot different than 60 percent; it tends to read as “2-to-1 favorites” rather than “just slightly better than a coin flip.” But it isn’t much of a change, really; Democrats still have a 34 percent chance of prevailing. The difference between a 40 percent chance and a 34 percent chance is one additional “hit” for every 17 attempts. Essentially, Democrats have fallen from Williams’s chances of getting a hit in 1941 to Tony Gwynn’s in 1989.

With that said, it’s been hard to find good news for Democrats in the Senate polls lately. Colorado has broken against its incumbent, Mark Udall. Sen. Mark Pryor’s odds of holding his seat in Arkansas have become longer. Democratic incumbents are still favored in North Carolina and New Hampshire, but those races have tightened.

Sometimes, Democrats have had to settle for an absence of bad news. Joni Ernst, a Republican, is the slight favorite in Iowa. But her lead is small and steady at 1 or 2 percentage points; it’s not expanding like Republican Cory Gardner’s in Colorado. Greg Orman, an independent in Kansas who could caucus with the Democrats if he wins, no longer holds a consistent lead over the Republican incumbent, Pat Roberts. But Roberts hasn’t pulled ahead either.

The one real exception has been in Georgia. Contrary to some media accounts, it was never out of reach for the Democrat, Michelle Nunn. But Nunn has led Republican David Perdue in the past two surveys by the highly rated pollster SurveyUSA and been very close in just about every other poll. Her chances are as good as at any point in the election cycle.

There are a few complications. The recent polls in Georgia have been a slightly Democratic-leaning bunch, according to our model’s house effects adjustment. But far more important is that the race will require a runoff if neither candidate wins 50 percent of the vote Nov. 4.

The dynamics of a potential runoff are a bit unclear but probably somewhat unfavorable to Nunn:

So, there’s a good deal of uncertainty. But the FiveThirtyEight forecast now has Nunn with a 40 percent chance of winning — just slightly worse than a coin flip.

Technically speaking, that projection doesn’t distinguish the Nov. 4 ballot from the runoff. If pollsters were testing a two-way matchup without Stafford on the ballot and trying to evaluate how turnout might differ in a runoff, we might do something more sophisticated, like running separate simulations of the Nov 4. and runoff ballots. Unfortunately, almost none of the pollsters are doing that, so 40 percent has to serve as our stand-in for Nunn’s overall chances of winning the Senate seat.

Nunn does have some chance — about 20 percent, according to our model — of winning an outright majority Nov. 4. (Perdue has about a 35 percent chance of doing so.) Otherwise, Democrats would have to take their chances in a runoff.

Here’s the thing: Taking their chances in a runoff would be a lot better for Democrats than having no chance at all. Nunn’s chances of winning Georgia — 40 percent — are better than Democrats’ chances of keeping the Senate (34 percent). That means Georgia may be more a necessity than a luxury.

From the set of simulations the FiveThirtyEight model ran Wednesday night, I pulled out those cases in which Democrats held onto the Senate with 50 seats (including any independents who might caucus with them). This is the bare minimum Democrats would require, as Vice President Joe Biden’s vote would break the 50-50 tie in their favor.

In the chart below, I’ve listed how often Democrats won the competitive states in those cases where they held control of the Senate 50-50. This isn’t quite the Democrats’ “path of least resistance.” There’s a lot of resistance: Holding the Senate will require Democrats to win some states where they’re underdogs. It’s more like their path of last resort. And more often than not — 57 percent of the time — that path included a Democratic win in Georgia. 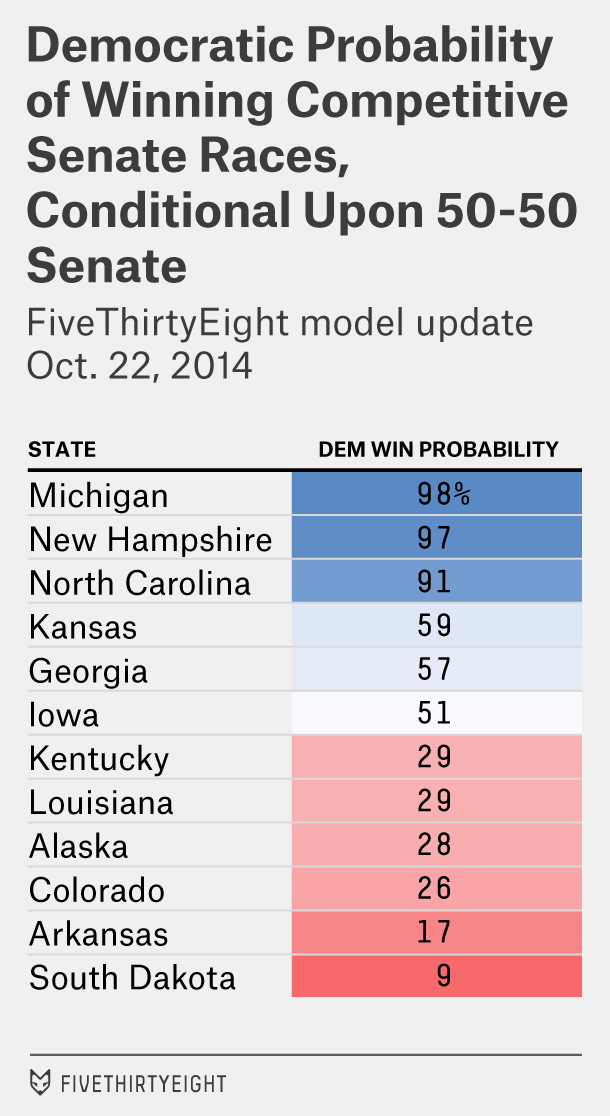 Some of the other figures in the chart are intriguing. Democrats have a 97 percent chance of winning New Hampshire conditional upon the outcome in the Senate being 50-50, for example. That might sound awfully high; Jeanne Shaheen’s overall chances of winning the state are about 80 percent. However, most of the time Shaheen loses New Hampshire, Democrats will have had a poor night nationally and Shaheen’s loss would be superfluous. (At least for now, if Democrats lose the Senate, their margin of defeat will be quite important in 2016.) In fact, in the simulations where Republican Scott Brown won New Hampshire, the GOP finishes with an average of 54 Senate seats, winning the majority with ease.

Georgia has more chance of being a tipping-point state that would determine majority control. It would be too much to call it a “must-win” state for Democrats; they do have some other options. But they have a better chance of winning Georgia than they do of salvaging their incumbents in Colorado, Louisiana, Alaska and Arkansas — or holding the seats in South Dakota, West Virginia and Montana, where Democratic incumbents are retiring. Losing all seven of those seats, but winning Georgia, Kansas and Iowa, is the Democrats’ best chance.

Without Georgia as an option, Democratic chances of keeping the Senate would be down to about 25 percent. Twenty-five percent chances come in fairly often, too — they come in 25 percent of the time! — but Democrats would be downgraded from Gwynn to Alfredo Griffin.

CORRECTION (Oct. 24, 11:45 p.m.): A previous version of this post incorrectly said Democrats would maintain control of the Senate if they lost Colorado, Louisiana, Alaska, Arkansas, South Dakota, West Virginia and Montana, but won two from among Georgia, Kansas and Iowa. In fact, Democrats would need all three.