But is Arizona really a swing state?

Let me remind you about how I use the term “swing state” here at FiveThirtyEight. When I employ the term, I mean a state that could swing the outcome of the election. That is, if the state changed hands, the victor in the Electoral College would change as well.

The most rigorous way to define this is to sort the states in order of the most Democratic to the least Democratic, or most Republican to least Republican. Then count up the number of votes the candidate accumulates as he wins successively more difficult states. The state that provides him with the 270th electoral vote, clinching an Electoral College majority, is the swingiest state — the specific term I use for it is the “tipping point state.”

From Barack Obama’s perspective in 2008, for instance, his easiest three electoral votes were in the District of Columbia. The next-easiest were the four electoral votes in Hawaii, giving him seven total. Repeat this process and you find that Colorado was the tipping point state in 2008, putting him over the top with 278 electoral votes. (Although, winning Iowa but not Colorado would have sufficed to give Mr. Obama 269 electoral votes, an exact tie in the Electoral College.) 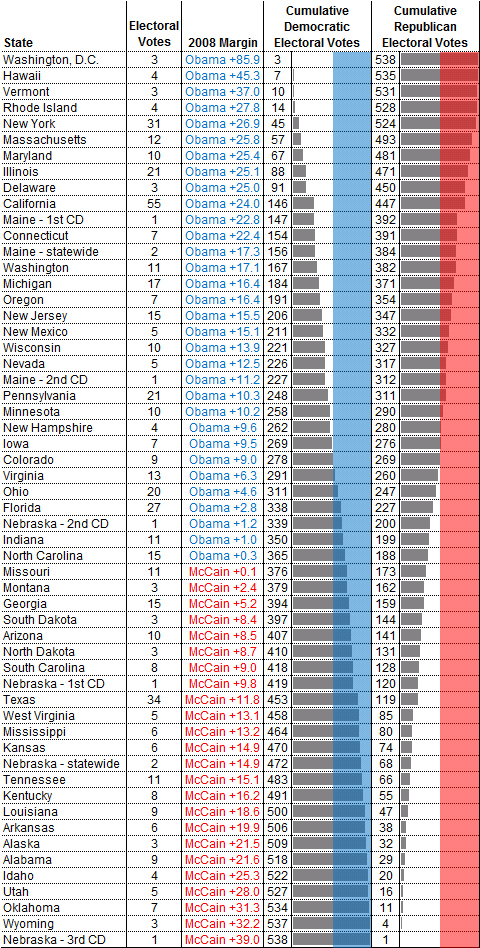 Likewise in 1984, when Walter Mondale was clobbered by Ronald Reagan, the closest states were Minnesota and Massachusetts. But Michigan was the tipping point state; its 20 electoral votes were the ones that put Mr. Reagan over the top.

If you’re not going through all this work to sort the states in order — and it does require some work, since you need to project the outcome in every state as well as account carefully for the uncertainty in the forecast — a reasonably good alternative is just to compare the average of state polls to the average of national polls. The closer the state is to the national average, the more likely it is to play a decisive role in the election.

How about Arizona? The two most recent polls should show a rough tie there — but since Mr. Obama leads in national polls, it’s still about four points away from the tipping point.

And those polls may have been modest flukes. A longer-term average has Mr. Romney three percentage points ahead there, meaning that Arizona leans a net of seven points more Republican than the average of national surveys.

Arizona showing a seven-point Republican lean relative to national numbers would be fairly normal. That’s about where it was from 1992 through 2004, for instance. The gap was wider in 2008, but presumably because its native son, Mr. McCain, was on the Republican ticket.

None of this is to say that Mr. Obama couldn’t win Arizona — he certainly could. Bill Clinton won Arizona in 1996 when he won the election by about eight percentage points nationally. If Mr. Obama won by a similar margin, he’d be at least even-money to pick up the state as well.

But if he does win Arizona it will probably be superfluous, since in all likelihood he’ll already have won states like Ohio, Colorado and Virginia that are closer to the tipping point.

The situation is analogous to Mitt Romney winning a state like New Jersey, which is also plausible if Mr. Romney wins the election by several points nationally. But that doesn’t make New Jersey a swing state — it’s just extra spoils for the winner.

With all that said, there is a lot of uncertainty this far out from the election. The ordering of the states is usually fairly consistent from year to year, especially when there is an incumbent running for re-election, but they can be scrambled to some extent by local issues, long-term demographic trends or the amount of attention that the campaigns focus on them. It’s not impossible that Mr. Obama could pursue a “Western strategy,” adding Arizona while holding Colorado, Nevada, New Mexico and the Pacific Coast states. That would give him a lot of slack elsewhere. 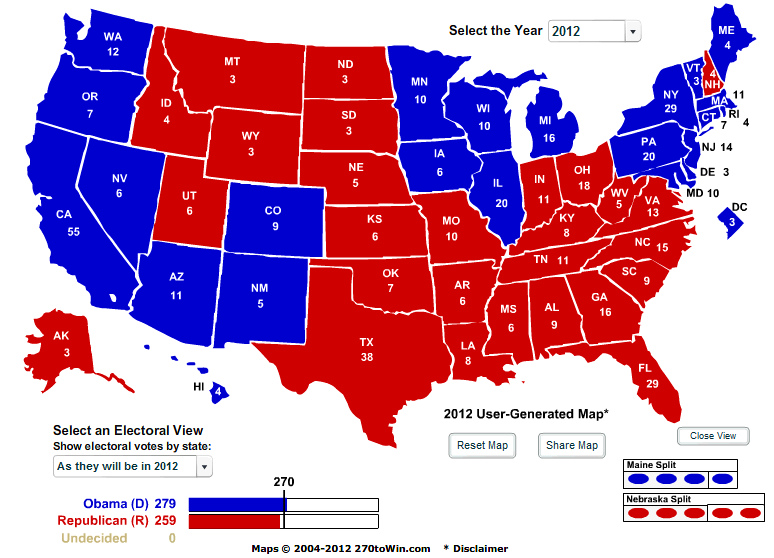 But the benchmark for whether these possibilities are realistic and relevant to the Electoral College equation — and whether Arizona should really be thought of as a swing state — will be if Mr. Obama starts to poll consistently as well in Arizona as he does in states like Ohio. The state is worth keeping an eye on, but we haven’t seen that yet.