If the polls are right, Republicans will take control of the United States Senate when it reconvenes next year. They’ll retain the majority of the nation’s governorships, although perhaps with a net loss of one or two seats. FiveThirtyEight hasn’t issued a House projection this year, so here goes nothing: Republicans will keep it. (Want more detail? The Cook Political Report thinks Republicans will gain a few seats, probably a net of 6 to 12, from Democrats.)

Sounds like a pretty good night for Republicans? It would be. But there are a few apparent complications.

Complication No. 1. Some prominent Republican incumbents are likely to lose. Senator Pat Roberts of Kansas is no better than even money to keep his seat against independent Greg Orman. Incumbent Republican governors are underdogs — some by slim margins — in Alaska, Florida, Kansas, Maine and Pennsylvania, while Rick Snyder of Michigan and Scott Walker of Wisconsin are likely but not certain to survive.

Complication No. 2. Republicans are largely playing on home turf. The average Senate race this year is being held in a state where Barack Obama won just 46 percent of the vote in 2012. In the House, meanwhile, the median Congressional district is Republican-leaning. (Democrats tend to be packed into geographically compact, urban areas; this tendency is sometimes enhanced by gerrymandering.) A method of assessing the score probably needs to account for this.

Complication No. 3. The House, Senate and gubernatorial results seem to tell different stories. Polls project major Republican gains in the Senate but modest ones in the House and perhaps a net loss of Republican governorships. How to reconcile this evidence?

So if the election goes about as polls predict, it would suggest that 2014 was way worse for Democrats than 2008 and somewhat worse than 2012 but somewhat better for them than 2010.

We can get to this conclusion in other ways too. In recent election years, as split-ticket voting has become less common, the aggregate popular vote for the U.S. House has become a more reliable measure of the overall mood of the country. Unlike the presidential vote, it gives us a data point every two years instead of every four. In the chart below, I’ve tracked the House popular vote in every election since 2000. 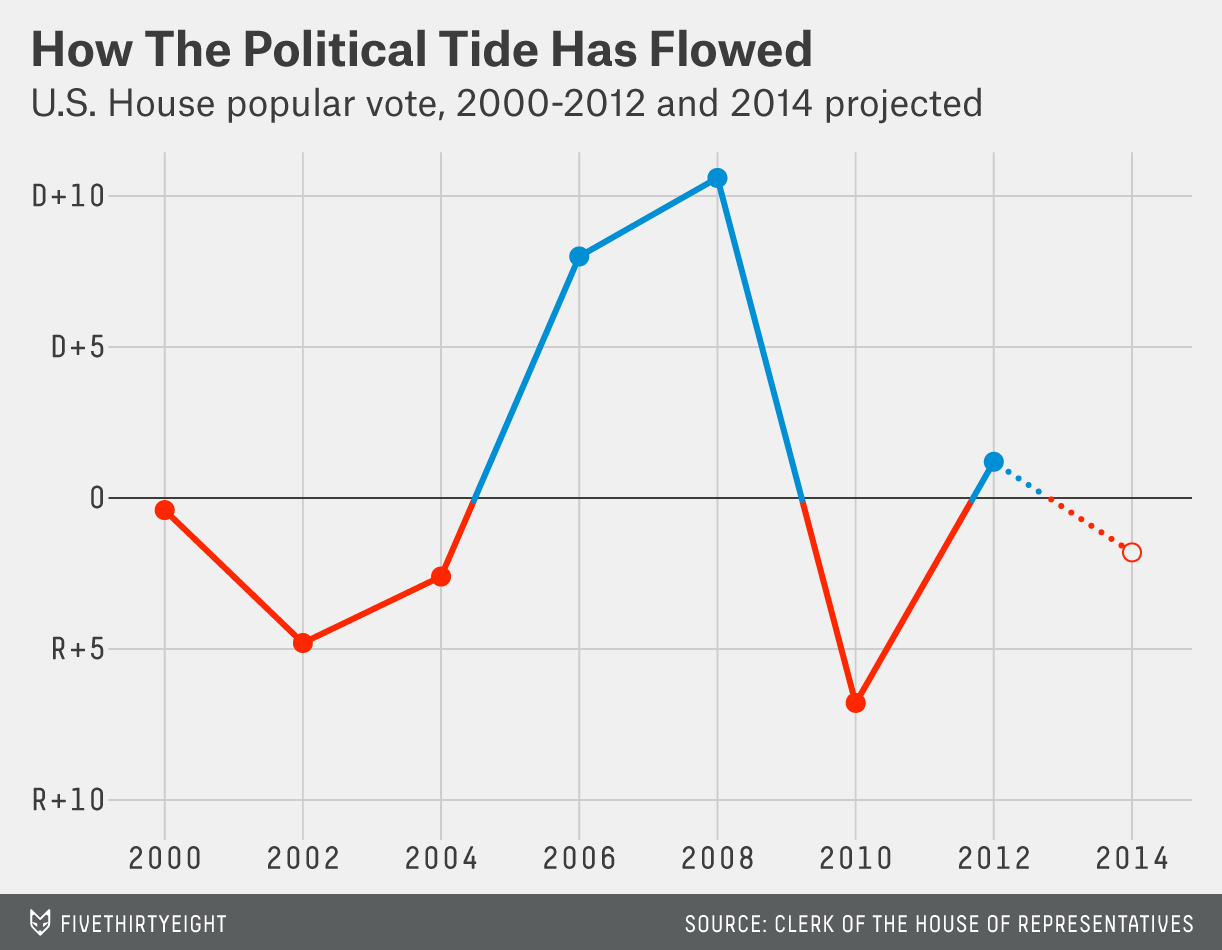 This measure tells us a lot of things we knew already: 2000 was even politically. Republicans had a good year in 2002 — unusually, they gained seats in the midterm elections — as George W. Bush was popular and national security weighed heavily on voters’ minds after the Sept. 11 attacks. The GOP advantage narrowed a bit in 2004 but Bush won reelection. The tide shifted to Democrats in 2006 and, even more so, 2008. There was a huge reversal back toward Republicans in 2010. But they had a disappointing year in 2012.

The data point for 2014 reflects this year’s generic congressional ballot, a poll-based projection of the national House vote. There’s been huge variation from survey to survey on the generic ballot, but the average currently favors Republicans by about 2 percentage points. If the average is about right, it would tell us the same thing we inferred a few paragraphs ago: 2014 is a better year for Republicans than 2012 and a much better year than 2008 but not as good as 2010.

So maybe this isn’t so complicated, after all. The polling data we have tells a pretty consistent story. The challenge is in the different interpretations it will enable, all of which will feature prominently in the post-election spin.

Harry Enten and I tend to be absolutists when it comes to interpreting the national mood. That is to say, we look at how the parties performed relative to a zero baseline of absolute partisan neutrality. So we might look at the generic ballot, which shows the GOP at +2, and see that as indicating a good but not great year for Republicans nationally. If you’ve heard us express skepticism that this year is a “wave” election for Republicans, this is why: we’re not seeing one party dominate to the extent it did in 2006 or 2010.

The reason I tend toward the absolutist view is because I see American political history as being highly stochastic (if not random, then at least hard to predict over the long term). If a party has a terrific year, as Democrats did in 2008 or Republicans did in 2010, I don’t interpret that as saying much about what the political landscape is likely to look like in future seasons. Instead, history is littered with proclamations of “permanent” or “emerging” majorities that proved to fail miserably.

There’s also the relativist’s viewpoint. It measures waves not as compared to zero but instead relative to previous elections. For instance, it would consider 1938 to be an enormous Republican wave year in the House of Representatives because President Roosevelt’s Democrats lost a net of 72 seats. The absolutist would point out, however, that Democrats still held the House majority 262-169 after those elections.

Both perspectives are valid. The relativist’s viewpoint is more common in political discourse — most histories of the 1938 election would call it a Republican wave year, for instance. But the absolutist may have a better way to reconcile those different-seeming Senate, House and gubernatorial results, since he recognizes that the shift in seats in each one is coming relative to a different baseline.

There’s one other, important part of the story, which has to do with incumbency. Although the ebbs and flows of American political history are largely unpredictable — in my view, anyway — there has been some tendency at all levels of American government for incumbents to be reelected.

However, as my colleague Dan Hopkins pointed out last week, the incumbency advantage has been waning from its historic highs in the 1980s and 1990s. We can see some evidence of that this year too.

Let’s look at the gubernatorial data first. This is going to be a nerdy approach. We can run a regression model where the dependent variable is the current margin separating the Republican from the Democratic candidate in the FiveThirtyEight polling average1 and the independent variables are incumbency2 and state partisanship as measured from presidential results based on FiveThirtyEight’s version of partisan voting index (PVI).3

More important is the coefficient on the incumbency variable, which is roughly +7. This indicates that incumbents are performing a net of about seven points better than non-incumbents, controlling for state partisanship. So incumbency is still an advantage on average.

However, it’s much less of an advantage than it used to be — if we had run the same analysis on an election from the 1980s or 1990s, we’d have come up with something like a 15- or 20-point incumbency advantage instead. The current incumbency advantage is small enough that it can more easily be outweighed by other factors: If, for example, a Republican incumbent is trying to get re-elected in a blue state, or if he’s unpopular or has run a poor campaign, he might well lose. This helps to explain why a number of Republican incumbent governors are likely to lose despite it being a reasonably good environment for Republicans overall.

Finally, the constant term in the regression is interesting. It’s roughly +2, which means that in a purple state with an open seat race, we’d expect the Republican to win by two percentage points based on the overall political environment this year. That closely matches what we see on the generic ballot.

Let’s quickly run through the same calculation for Senate races based on the FiveThirtyEight adjusted polling average in each state.4

These results tell a similar story. The relationship between presidential results and Senate results is higher than for gubernatorial races. But the incumbency advantage is about the same: eight points. That’s a lot better than nothing but low compared with the norms of the late 20th century.5

So is 2014 an anti-incumbent wave? That also depends on whether you’re a relativist or an absolutist. In a relative sense, incumbents are much more vulnerable than we’ve been used to. But in an absolute sense, it still helps on average to be an incumbent. Imagine that, instead of incumbency being an 8-point advantage, it was an 8-point disadvantage6 Not only would every incumbent in a competitive Senate race be certain to lose; a number of them in states that haven’t been on the political radar would be in the fights of their lives. Democrats Dick Durbin of Illinois, Al Franken of Minnesota, Cory Booker of New Jersey, Tom Udall of New Mexico, Jeff Merkley of Oregon and Mark Warner of Virginia would be in very close races. Republican Thad Cochran of Mississippi would be an underdog to hold his seat, while Lindsey Graham of South Carolina, Lamar Alexander of Tennessee and John Cornyn of Texas would be threatened in theirs. As many as 18 incumbents could lose. That’s what an absolutist’s anti-incumbent election might look like.

Instead this year, we’ll have to settle for a climate that’s less pro-incumbent than usual — and also somewhat pro-Republican. At least, that’s what we’ll be getting if the polls are right.