By this point in an election year, when polls are coming in by the bucketload late in the evening, you can get a sense for which pollsters are taking fresh samples of public opinion and which are herding toward the conventional wisdom.

J. Ann Selzer, whose firm Selzer & Company conducts the Des Moines Register’s Iowa Poll, is in the former group: She’s always been one to trust what her data is telling her. On Dec. 31, 2007, Selzer’s poll was among the first to show a large lead for Barack Obama in the Iowa Democratic caucuses — most other polls had a small edge for Hillary Clinton. But Selzer’s poll proved to almost exactly match Obama’s margin in the caucuses four days later.

In September this year, Selzer’s poll showed a 6 percentage-point lead for the Republican Joni Enrst in the Iowa Senate race, defying others that had shown the race as a tossup. Although an early October Selzer poll showed the Democrat Bruce Braley narrowing his deficit to just 1 point, the final Des Moines Register poll, released Saturday night, has Ernst up 51-44 — a 7-point advantage. Other polls of Iowa show Ernst ahead, on average, by a percentage point or two.

Of course, the polling average is usually a more reliable indicator than even the best polls. No poll is clairvoyant — even one that consistently rates as among the most accurate in the country, as Selzer’s does. Polls face inherent limitations because of sampling error, and even the best pollsters face challenges in getting voters to talk to them. If Ernst’s 7-point lead in Selzer’s poll represented the equivalent of a point spread, the FiveThirtyEight model would take Braley’s side of it.

But the model is increasingly confident that Ernst will win. Her chances are improved to 71 percent, up from 62 percent before the Des Moines Register poll. That’s about as large a swing as you’re likely to see on the basis of a single survey, at least in a densely polled state such as Iowa.

This poll, in other words, is a big deal. Just as Ernst’s chances have surpassed 70 percent for the first time, so have the GOP’s chances of taking over the Senate, which are now 72 percent. This is not coincidental: Iowa is a pivot point in the Senate calculus, and the two numbers have closely tracked each other for much of the year.

As I wrote Friday, there were previously six Democratic-held seats where the polls came to a reasonably clear consensus that the Republican candidate was ahead. These included Montana, South Dakota, West Virginia, Arkansas, Louisiana and Colorado. (Colorado is the closest of the six, but Republican Cory Gardner has led in 15 of the past 17 nonpartisan polls.)

If you add Iowa to the list of likely Republican pickups, they’ll have more of a buffer if they lose some of their seats — such as Kansas (where recent polling has shown Republican incumbent Pat Roberts just slightly behind independent challenger Greg Orman) or Georgia (where Republican David Perdue’s standing has rebounded in recent polls but perhaps not by enough to avoid a runoff against Democrat Michelle Nunn). Nor will the GOP have to rely on Alaska, where the polling has been a little crazy.

On Friday, I posed the question of whether the polls would have to be systematically wrong for Democrats to hold the Senate.

Technically speaking, we’re not quite there yet. If Democrats win Georgia and Alaska and North Carolina, and Orman wins Kansas and caucuses with them, they’d hold the Senate even if Republicans flipped Iowa, Colorado and the five other Democratic-held seats where GOP candidates have an advantage in the polls. But that’s quite a parlay to pull off.

Here’s one way to think about it. The FiveThirtyEight model accounts for the possibility that the polls could be systematically biased — in either direction. If I instead tell the model to assume the polls have no overall bias — even though they might be off in particular states — the Democrats’ chances of keeping the Senate would be just 17 percent. Democrats are becoming increasingly dependent on the possibility that the polls will prove to be “skewed.” 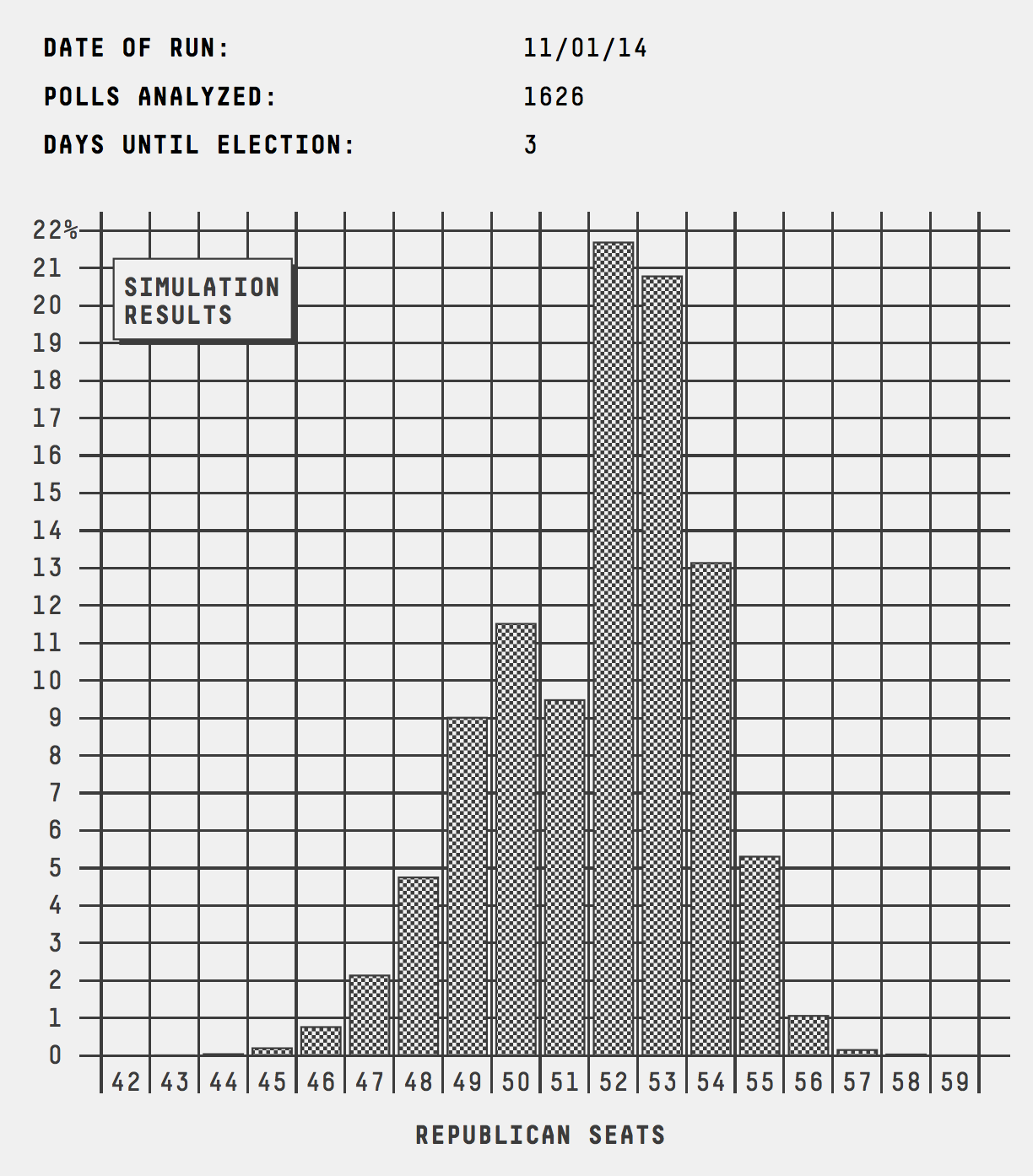