At FiveThirtyEight, we write about polls regularly, especially ahead of big elections like next month’s. We rate pollsters for their accuracy and whether they lean Republican or Democratic. And we use their work to inform our election model and Senate forecast. 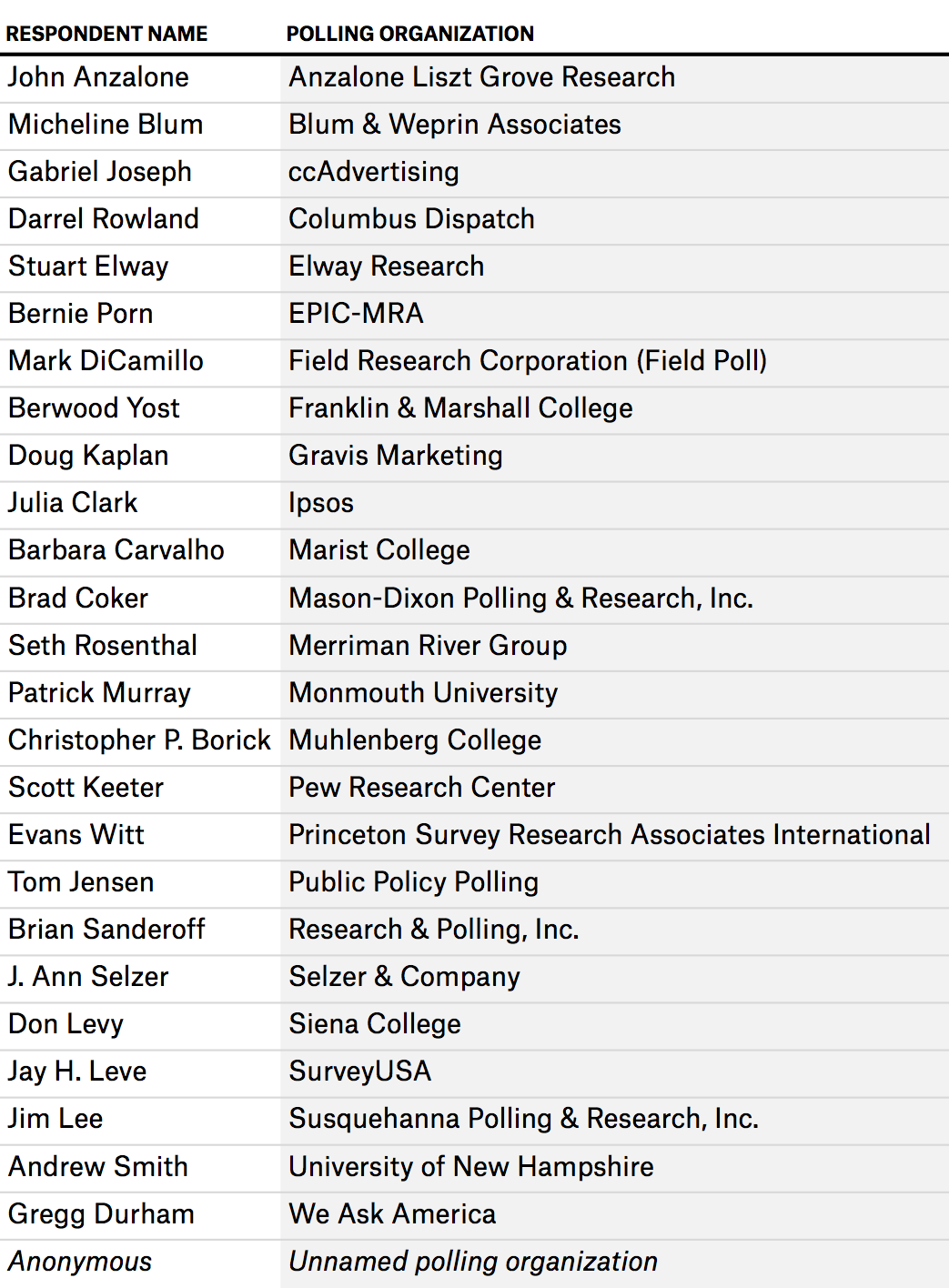 In their responses, most pollsters predict Republicans will win the Senate by a narrow margin. Many say fewer people are responding to polls this year, compared to 2012, and more expect greater polling error — that is, the difference between what the latest pre-election polls show and actual vote margins — in the upcoming election, than expect less error. And yet, the results also show how little the pollsters agree on.

To encourage them to speak freely, we’ve granted them the choice of making some or all of their answers anonymous. That’s why some quotes below aren’t attributed. We’ve also posted the results on GitHub, protecting anonymity where requested there, as well.

Republicans predicted to win the Senate by a narrow margin

While pollsters are in the business of asking voters what they think, instead of predicting how voters will act, 19 answered our question about how many seats they expect Republicans will hold in the next Senate. Two-thirds think Republicans will have a majority. Just two think they’ll have fewer than 50 seats, each predicting 49. The predicted margin is slim, though: An average of just under 51 seats for Republicans. (The most common outcome in the latest run of our model — occurring in about 18 percent of simulations — is 52 Republican-held seats.)

Among the reasons given for expecting a Republican victory:

Then there are the pollsters who say they rely on forecasts like ours, The Huffington Post’s and others’. And one who said, “It’s a guess, like everyone else’s.”

Fewer people are responding to polls

Fifteen pollsters told us their response rates for election polls this year and in 2012.2 The average response rate this year is 11.8 percent — down 1.9 percentage points from 2012.3 That may not sound like a lot, but when fewer than one in seven people responded to polls in 2012, there wasn’t much room to drop. It’s a decline of 14 percent, and it’s consistent across pollsters — 12 of the 15 reported a decline, and no one reported an increase.

These results are consistent with what pollsters have reported for years: that people are harder to reach by phone, and are less likely to want to talk to strangers when they are reached. Here, the pollsters show just how quickly response rates have fallen in only two years.

The American Association for Public Opinion Research’s website provides a downloadable calculator, which puts out four different response rates. The strictest definition counts only respondents who answer every poll question in the numerator, and counts every household contacted in the denominator. The loosest definition includes partial responses in the numerator, and adjusts the denominator downward by estimating how many of the people who weren’t reached at all weren’t eligible for the poll, anyway.

None of the pollsters we contacted said they used the strictest definition. At least two pollsters used each of the other three looser definitions. Others either didn’t specify or used a non-AAPOR definition.

The definition used can matter a lot. One pollster defined response rate as completed interviews divided by number of people who were successfully contacted and qualified for the poll. That yielded a response rate of 19 percent. But if the denominator were all numbers dialed, a more typical definition, then that pollster’s response rate would be just 5 percent to 7 percent.

We asked pollsters if they expected more or less error in Senate election polls — the difference between what the latest pre-election polls show and actual vote margins — this year than two years ago. Ten said they expected a higher average error, while just five predicted lower error.

No one cited low response rates as a reason to expect poll error. Perhaps that’s because pollsters have managed to maintain strong national-election records despite declining response rates.

Instead, the top reason cited was the difficulty of forecasting turnout in midterm elections, without a presidential race to bring voters to the polls. And the crucial midterms are in states that don’t usually have close races. “The key Senate battlegrounds this year are also places like Alaska, Arkansas, Kansas, Louisiana, etc., where most of the public pollsters don’t have a ton of experience,” one pollster said. “It’s not the Ohios and Pennsylvanias and Floridas of the world that we’re all used to polling a lot.”

Some also cited an increase in unproven polling techniques by pollsters. “Many are attempting to use Internet surveys with untested methodologies to determine likely voters,” said Darrel Rowland, the Columbus Dispatch’s public affairs editor, who conducts the newspaper’s Dispatch Poll. “As often happens to pioneers, there could be some grim results.”

Another pollster echoed a lament we’ve made here: “There are far too few quality polls in 2014 and that is saying something, given what we saw in 2012.”

One pollster who predicted lower error this time around said lower turnout makes it easier to predict the vote of those who do show up on Election Day. Another, Gregg Durham of We Ask America, said that pollsters have gotten better at weighting the responses of the people they interview, to better represent the views of people who don’t respond.

One pollster who expected higher error had an even gloomier forecast for the industry — expect polling to be dead by 2030. “Like chickens whose heads have been severed but who do not yet realize they are dead, pollsters continue to torment respondents by barging into respondents’ lives unannounced. At present course and speed, pollsters will have obsoleted themselves before Nate Silver turns 50.4 When that day arrives, pollsters will have no one to blame but themselves.”

It’s hard to poll all over the map

My colleague Nate Silver wrote recently that Alaska is hard to poll. We asked pollsters where they had the hardest time, and collectively they mentioned 14 states and Washington, D.C., by name, plus several broad regions (New England, “urban” states, southern states, states with small population sizes). The states tying for the highest number of mentions were New York and Hawaii. Two also cited Alaska. One reason is common to both of the non-Lower 48 states: “Hard-to-reach populations,” said John Anzalone of Anzalone Liszt Grove Research.

Hawaii’s ethnic makeup in particular makes it hard to model using national databases. “Japanese ancestry voters and Chinese ancestry voters have very different voting patterns and are both key voting blocs, but are not differentiated in the databases,” said Seth Rosenthal of Merriman River Group. “Also, voter databases tend to mislabel Filipinos — another important voting block in Hawaii — as ‘Hispanic.’ ”

Two pollsters said New York had extremely low response rates, with one identifying New York City residents as particularly unresponsive. California, Florida, and Washington, D.C., all also got multiple votes. All were mentioned by pollster J. Ann Selzer, of Selzer & Company, as difficult because residents move in and out of the states and take their phone numbers with them, making them hard to find by area code.

Some pollsters also named Nevada as challenging, saying Nevadan Hispanics and blacks who answer polls tend to vote more conservatively than their counterparts who don’t. Tom Jensen, of Public Policy Polling, said that many Las Vegas residents keep unusual work schedules that make them hard to track down. Another pollster added, “Too much happens under the radar for opinion pollsters to pick up. … Nobody gets elections right in Nevada.”

Pollsters had various strategies for handling low response rates among blacks and Hispanics. For instance, six said they typically overweight black respondents, and eight said the same about Hispanic respondents, to account for lower response rates in those groups. And 11 said they oversample blacks or Hispanics for polls specifically covering racial issues.

We found earlier this year that the number of political polls is declining. In this poll, we asked what the biggest reason was. A few respondents disagreed with the premise of the question. Of the rest, only two named the emergence of poll-based forecasts such as ours and The Upshot’s. Six cited the rising cost of polls. But 12 said the reason was media companies’ shrinking budgets.

Newspapers and television stations sponsor many election polls, but fewer than they used to. And media consolidation has left fewer potential sponsors. Several respondents shared stories of polling frequency declining from monthly to a couple of times a year.

We separately asked what proportion of pollsters’ revenue comes from news-media clients now, and what that percentage was in 2010. Of those who answered, seven said the proportion was lower now, five said it was higher and nine said it was the same. Just five said they get more than 10 percent of their revenue from media clients.

Those who attributed the decline to rising costs said reaching people on their cellphones was more expensive, because they had to dial cellphones by hand. (A 1991 anti-telemarketing law bans automatically dialed calls to cellphones.) Other pollsters reach households without landlines through the Internet, which also adds to costs. We separately asked how much more it costs to include cellphones in polls. The median response was a 25 percent increase in cost. Nonetheless, many said they now include cellphones in all their election polls.

A couple of pollsters think the decline in political polls is cyclical and not permanent. Andrew Smith, of the University of New Hampshire, mentioned that the spike in polls in 2008 might have been an aberration. Jensen, of Public Policy Polling, said there’s less interest across the board in these midterms compared to those in 2010.

Our pollster ratings and our model factor in whether polling firms are members of the National Council on Public Polls, are participants in the American Association for Public Opinion Research’s Transparency Initiative, or release their raw data to the Roper Center Archive. As Nate wrote, there is “reasonably persuasive evidence that methodology matters.”

So we asked pollsters about their participation in these three initiatives, and why they did or didn’t participate. Only five said they release data to Roper. Eight are members of the NCPP. Most — 16 — participate in AAPOR’s Transparency Initiative.

Almost all the Roper holdouts cite client confidentiality. Others say Roper hasn’t asked, or that formatting the data for Roper requirements is too expensive or time-consuming.

The smaller number of firms that haven’t signed on with AAPOR’s Transparency Initiative also cited the confidentiality of client data. Several of those who have signed on were big believers, with comments like Stuart Elway’s, of Elway Research: “I believe it is important to protect the integrity of the profession.”

With declining response rates, rising costs and falling funding, many polls are moving online. We asked our respondents when they expect Internet-based polling to overtake phone polling as the primary method used in election polling. Of the 18 who responded with a date, or “never,” the median answer was 2020. Two expected it to happen by the next presidential election.

“We are beginning to consider transition plans,” Borick, of Muhlenberg College, said, “but since costs have remained acceptable and results very accurate, our transition is not imminent.”

Some think online polling has already overtaken phone polling. Others say phone and Internet are being used side by side in some polls and will continue to complement each other.

Anything you want to ask our pollsters? We’ll be sending them another survey soon, and are open to suggestions. (We also asked the pollsters to suggest questions for one another, and will use some of those.) Email suggestions to cbialik@fivethirtyeight.com or leave them in the comments.