The Supreme Court’s decision on the Voting Rights Act on Tuesday — which struck down one provision of the law outright, neutered another and set a precedent that could eventually threaten the rest of the legislation — may reduce the pressure on states to create majority-minority districts when they engage in Congressional redistricting after each decennial census.

I’ve seen a lot of speculation on Twitter about the effects this ruling might have on the partisan composition of Congress, but most of it doesn’t get the story quite right, in my view. The problem is that most people are putting too much weight on gerrymandering and not enough on geography.

There’s no doubt that the tendency of racial minorities to be concentrated in a group of overwhelmingly Democratic districts hurts the Democratic Party as it seeks control of the United States House. In the chart below, I’ve sorted the nation’s 435 Congressional districts based on the percentage of the vote they gave to Mitt Romney and Barack Obama last year. 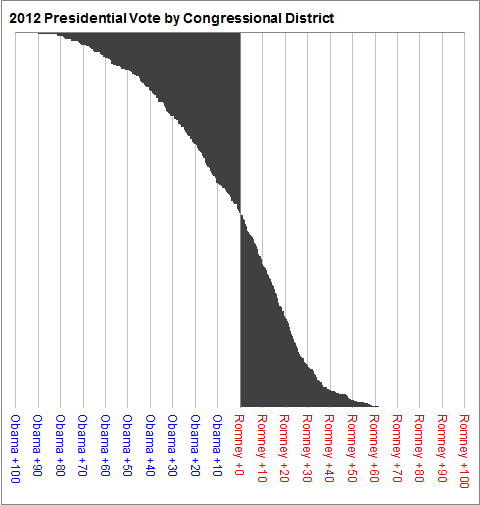 The asymmetry is self-evident. There were 44 Congressional districts in which Mr. Obama won by at least 50 percentage points last year, compared with only eight for Mr. Romney. These hyper-partisan districts are far past the point where a Democratic candidate for Congress could lose under almost any circumstance, so they create wasted votes for Democrats. As a result, Mr. Romney won the majority of Congressional districts (226 out of 435) last year, despite losing the national popular vote by roughly four percentage points. And Democrats gained only eight seats in the House despite winning a (very narrow) plurality of the aggregate popular vote for the chamber. 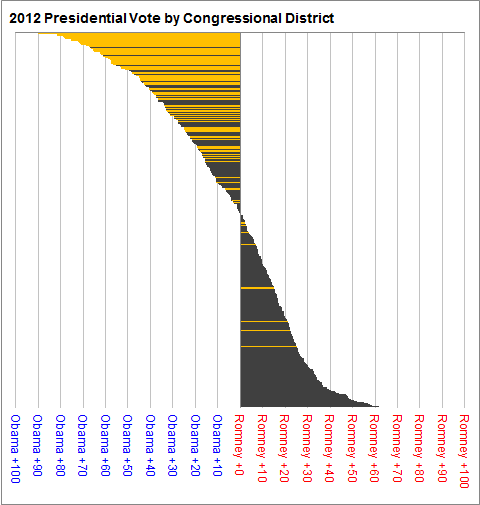 But minority populations, especially African-Americans, tend to be highly concentrated in certain geographic areas. In the North, this is generally in major cities; in the South, it may be in both urban areas and some agricultural regions (with minority populations generally low in the suburbs). You’d have to go out of your way not to create overwhelmingly minority (and Democratic) districts on the South Side of Chicago, in the Bronx or in parts of Los Angeles or South Texas, violating nonpartisan redistricting principles like compactness and contiguity.

Moreover, especially outside of the South, the white voters in cities with high minority populations tend to be quite liberal, yielding more redundancy for Democrats.

A variety of academic analyses of redistricting have found that this geographic self-sorting accounts for much — probably most — of the “skew” of Congressional districts against Democrats. Gerrymandering and other partisan efforts at redistricting do play a role, but it is mostly around the margin. A study by John Sides and Eric McGhee found that redistricting after the 2010 Census, which was controlled by Republicans in many key states, produced a net swing of only about seven House seats toward Republicans.

In this context, the legal requirements of the Voting Rights Act might also have a relatively minor effect on the number of majority-minority districts, most of which arise as a result of the geographic distribution of minority voters.

To the extent that there would be any effects from abandoning certain requirements, would they help Democrats or Republicans on balance?

The safest answer is that it will tend to help whichever party is in control of the redistricting process in a given state: the fewer legal constraints that party has, the freer it will be to draw Congressional districts as it sees fit. So if Democrats are in charge of the redistricting process in New York in 2020, perhaps they can find a way to squeeze out another Democratic seat or two by splitting up minority voters. And if Republicans are in charge in Texas, perhaps they can avoid giving up as many seats to Democrats by diluting the minority vote in cities like Dallas and Houston.

Thus, legal rulings that weaken the effect of the Voting Rights Act will tend to increase the importance of the 2020 elections, when control of the redistricting process will be at stake. But any of these effects are likely to be relatively minor compared with the role geography plays.