Sports fans have selective memories. Most of us NBA geeks know that Bernard King, the former New York Knicks forward, was never the same after tearing his anterior cruciate ligament in a 1985 game. We remember that Grant Hill’s ankle injury in 2000 permanently dimmed his star status, and that Gilbert Arenas’s career went into a downward spiral after he blew out his knee in 2007.

But we forget the cases where a serious injury was just a footnote to a long career. Mark Price, the Cleveland Cavaliers’ point guard, tore his ACL early in the 1990-91 season and was out most of the year. He returned to make the NBA All-Star team in each of his next three seasons. A shoulder injury, and eventual shoulder surgery, cost Chris Webber more than a season’s worth of games between 1994-95 and 1995-96, but he wound up as a borderline Hall of Famer. Michael Jordan broke his foot in his second NBA season, missing 64 games in 1985-86. His career turned out pretty well.

If we want to get a better sense of the future of Paul George, the Indiana Pacers star who fractured his right leg while scrimmaging with Team USA last week, we need a more comprehensive way of identifying star players who got hurt. I searched our NBA database for players since 1976-77 to whom the following happened:

Price, for instance, produced 9.7 wins in 1989-90 then played in just 16 games in 1990-91, so he qualifies. So do 24 other players, counting the oft-injured Anfernee Hardaway twice. Those players are listed in the chart below, which tracks how their careers progressed before and after their injuries.1 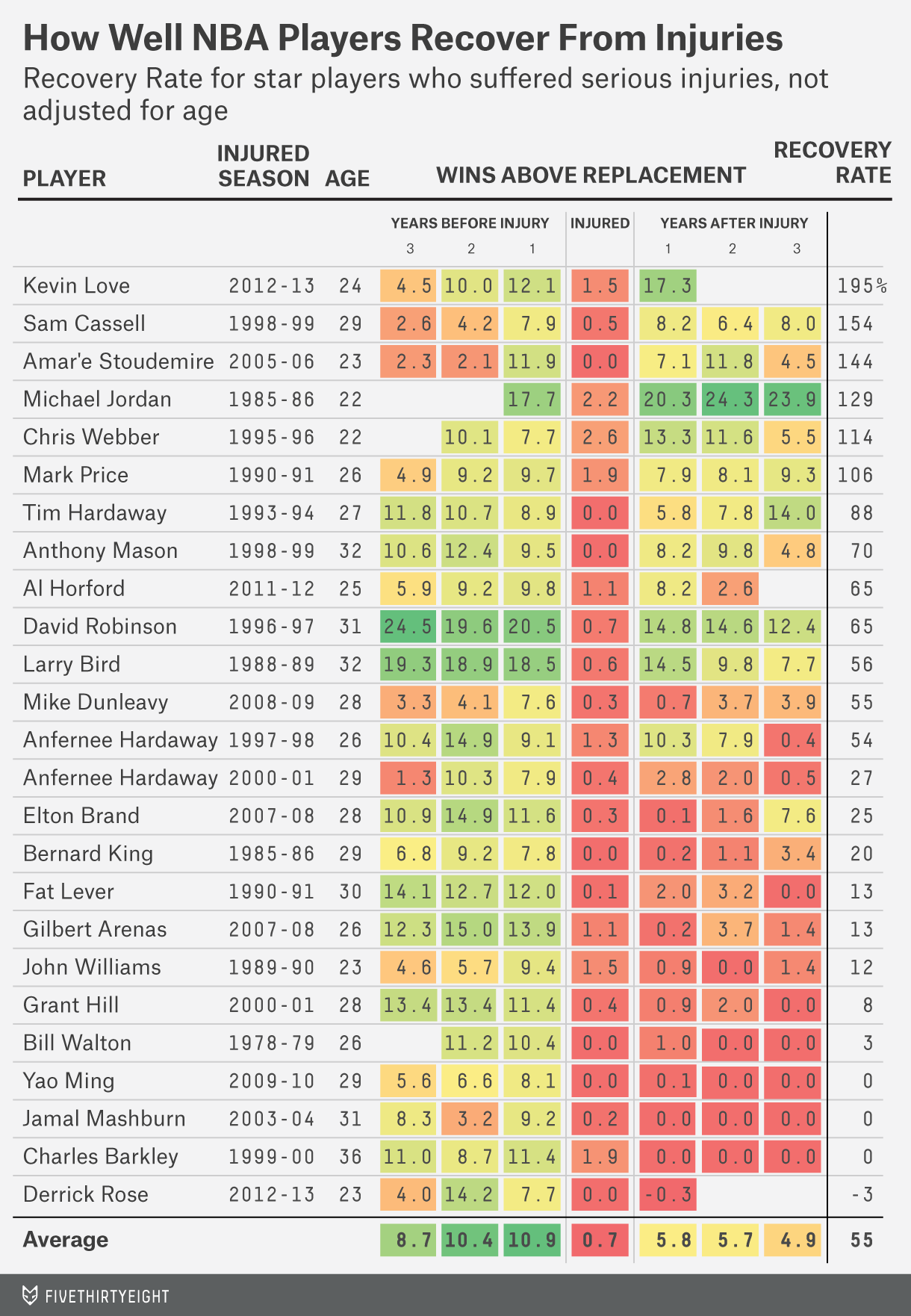 You probably get the general sense for how the chart works — green numbers are good and red ones are bad — but there’s some terminology to sort out:

This is not a list of every NBA star who suffered a severe injury — for instance, my selection process will tend to miss star players whose injuries came in the middle of a season instead of toward the beginning or the end. So there are some false negatives. But there shouldn’t be any false positives — I screened out players who missed time due to illness, suspension, a retirement not forced by injury, or some other reason.5 All these players were producing at an All-Star level at the time of their injuries.

It’s a noisy set of examples. Six of the 25 players, like Jordan and Webber, had Recovery Rates above 100 percent, which means that they were actually better after their injuries than before. Another six, like Arenas and Yao Ming, had Recovery Rates of 10 percent or below, meaning that they lost almost all their value (although some, like Grant Hill, recovered to be productive role players later in their careers).

The average Recovery Rate is just 55 percent, meaning that the typical player was only about half as good after his injury as beforehand. But that paints too pessimistic a picture for George and the Pacers.

The reason is that there’s a correlation between Recovery Rate and age. With some exceptions, the players who returned to have productive careers after their injuries were young at the time they got hurt, while the ones who didn’t were in the middle to late stage of their careers: 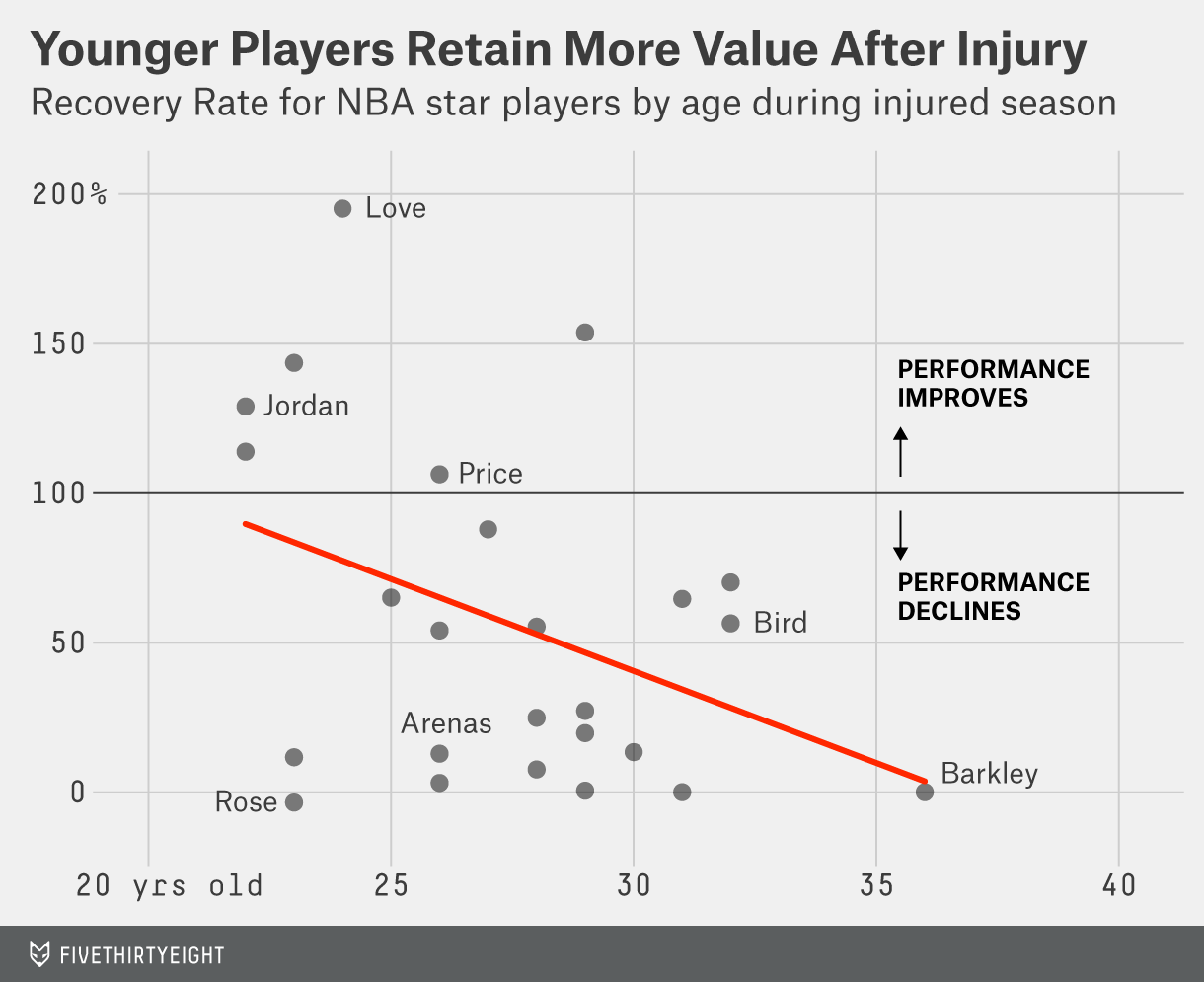 George recently turned 24. The regression line in the chart above implies that the average player who is injured at that age will come back to be 75 percent to 80 percent as productive as he was before. If George came back at 75 percent to 80 percent of his former self, that would not be such a bad outcome for the Pacers. Between 2011-12 and 2013-14, George was worth an average of 11 wins per season; 80 percent of that would make him a 9-win player instead between 2015-16 and 2017-18, the last three guaranteed years of his contract. Wins above replacement in the NBA are worth about $3 million a pop, so that means he’d be producing $27 million worth of value per season for the Pacers — on a contract that will pay him about $18 million per year instead.

But we haven’t accounted for how George would project if he hadn’t been hurt. For that matter, we haven’t compared our injured stars against a control group of other All-Star-caliber NBA players.

Take David Robinson, who missed almost all of the 1996-97 season with a back injury.6 His Recovery Rate is calculated at 65 percent, which implies that he lost something after returning from the injury. But Robinson was already 31 years old at the time — most basketball players are in decline at that age even if they stay relatively healthy. Was Robinson’s decline worse than what we would have expected without the injury?

That’s the calculation I’ve made in the chart below. It compares the Recovery Rate for injured stars against the same calculation for all NBA players who had a 7.5 WAR season, whether or not they got hurt the next year.7 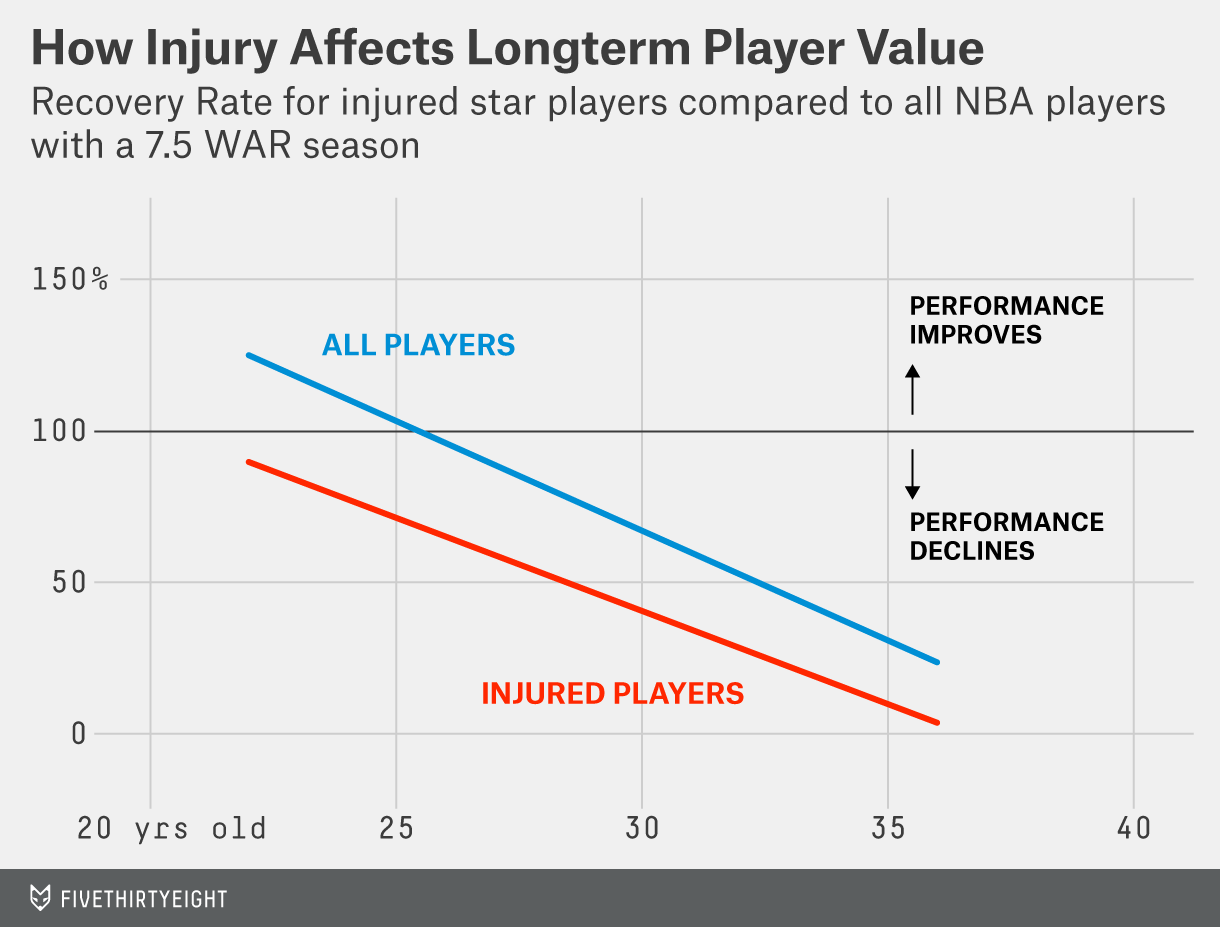 In Robinson’s case, a player at his age would typically retain 60 percent of his value. Robinson retained 65 percent instead. The injury didn’t really have any lasting effects; Robinson resumed a typical aging curve after missing most of 1996-97.

This also tells us a more nuanced story about George. It’s not that young players like him recover better from injury so much as that they were on more of an upward trajectory to begin with. In fact, the two lines in the chart are almost parallel. That implies the impact of a severe injury is fairly constant regardless of a player’s age. More specifically, it reduces his long-term value by 30 percent, on average. George is projected to be about 80 percent as good as he was before his injury. But if he hadn’t gotten hurt, he’d project to be about 110 percent as good as he was instead.8

In other words, young players can suffer a setback and still be very good. A player who was already in decline and then suffers a serious injury often has too much working against him.

But each of these outcomes describes an average — and there’s a huge amount of variation around those averages. It’s entirely plausible that George will never again be a productive player in the NBA. And it’s entirely plausible that he’ll come back even better than before. Perhaps in April 2017 Zach Lowe will be writing about how George was forced to become a better spot-up shooter while his mobility was limited after his initial return from injury — but then his quickness came back, making him a more multidimensional player than before. Here’s hoping that 10 years from now the injury won’t be the first thing we think about when we think about Paul George.