When Jared Sullinger, the nation’s No. 2 high-school recruit, finished his freshman year playing center at Ohio State in 2011, he was forecast to be drafted into the NBA in the top three. But when he declared that he was going back to school for his sophomore season, his draft stock plummeted, bottoming out at the 20th pick the next year, according to one mock draft. This was despite a season in which Sullinger won his second consensus All-American award and led Ohio State to the Final Four. Eventually, he went No. 21 to the Celtics — a bargain considering he’s outperformed most of the players who went in the lottery that year.

The Celtics have had success with sophomores. Their best player, Rajon Rondo, entered the draft after his sophomore year at Kentucky,1 and they were the first team to take a sophomore in Thursday’s NBA draft, choosing Marcus Smart of Oklahoma State with the sixth pick. But the Celtics are atypical. The draft’s top four picks, Andrew Wiggins, Jabari Parker, Joel Embiid and Aaron Gordon, left college after their freshman year. Two freshmen whom the Celtics bypassed, Julius Randle and Noah Vonleh, went No. 7 and No. 9.

Drafting freshmen has become the new normal in the NBA. Since 2006, when the NBA raised its age limit to 19 years and precluded high school players from entering the draft, the roster of players chosen Nos. 1 through 5 has consisted of 23 freshmen, nine sophomores, eight juniors, four international players and just one college senior.2 (By contrast, just four of the 40 top-five picks from 1998 through 2005 were freshmen.3)

From the players’ point of view, the trend is easy to explain. Elite basketball prospects aren’t typical college students: They’re sacrificing millions of dollars every year they stay in school. Since 2006, 32 of the top 40 high school recruits4 — 80 percent — played one year in college and then declared for the NBA draft. Only 20 percent played through their sophomore year or beyond.

The percentage of top recruits to play at least two years in college has decreased since the NBA instituted its age limit. Between 1998 and 2005, 35 percent of top high school recruits5 (rather than 20 percent) played through at least their sophomore year of college. True, another 45 percent did not attend college at all. But the one-and-done “compromise”6 has become the league standard. Given where players such as Sullinger and Kawhi Leonard, who slipped to No. 15 in the 2011 draft after being projected higher, were drafted, it seems like teams may hold something against players who take a second year in school.

So the Celtics’ attraction to sophomores may be no accident. They’ve been zigging while the rest of the league is zagging.

NBA teams are generally correct to assume that players who exit college as freshmen have more upside. The chart below, which is spun off from earlier data I gathered on the NBA lottery, lists the number of win shares accumulated by first-round draft picks7 during their first 10 NBA seasons. Ideally, we’d run the numbers only from 2006, when the NBA changed its eligibility requirements, onward. However, that would leave us with a small sample — and no one who’s played 10 years in the league. So instead, I’ve included all NBA drafts from 1995 through 20138 and grouped high school players and freshmen together. Juniors and seniors are also grouped together, while sophomores and international players get their own categories. 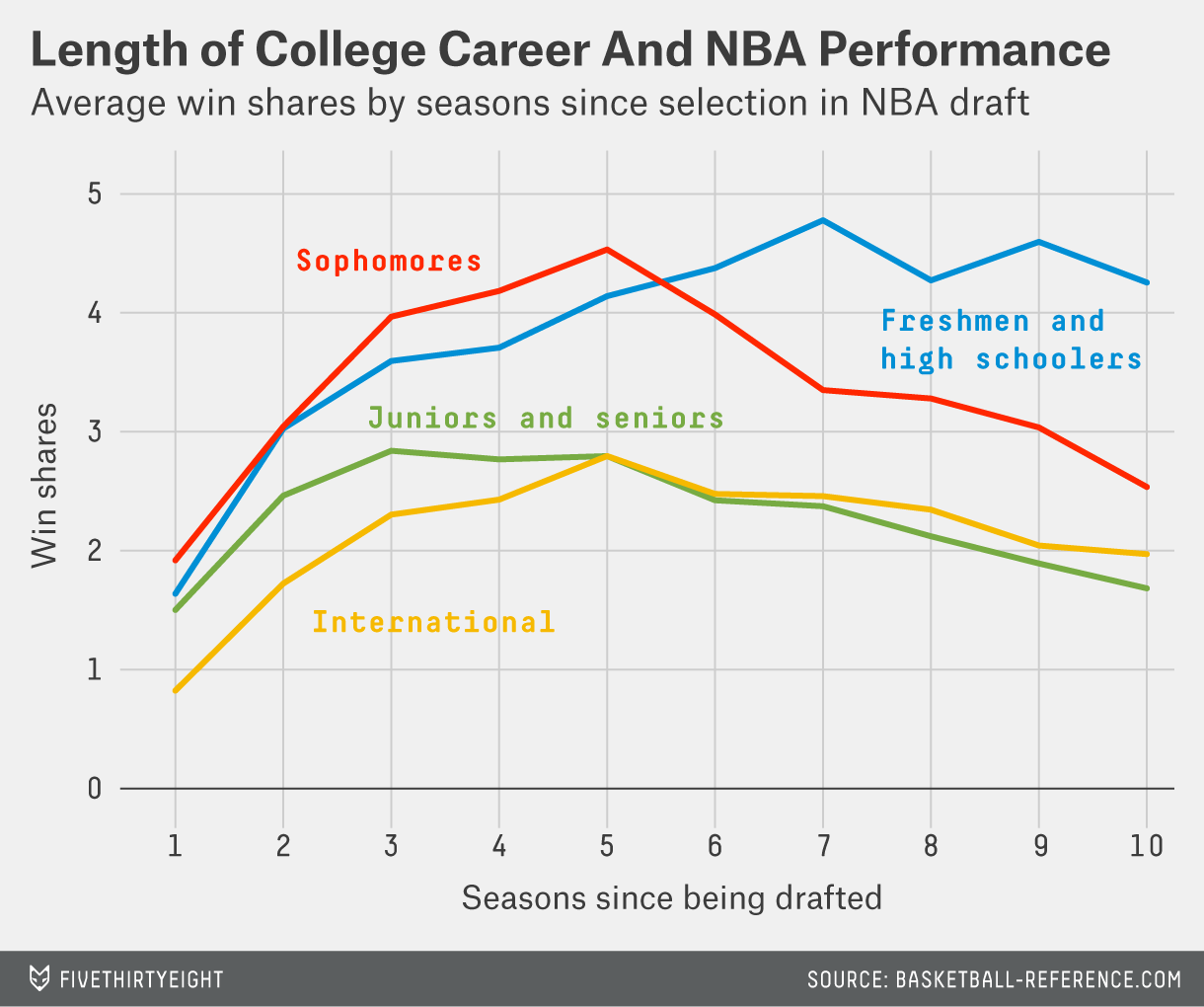 Freshmen and high school draft picks have better careers on average. Through their first 10 NBA seasons, they produce about 15 percent more win shares than sophomores, and 70 percent more than juniors and seniors.

However, they can take longer to come into their own. The average sophomore draft pick has been slightly better than the average freshman through his first five NBA seasons.9

But the slow development of a freshman can sometimes happen too late for the team that drafts him. Under the NBA’s current collective bargaining agreement (CBA), teams are guaranteed to have control of a first-round pick only through his first four or five NBA seasons. After that, a team theoretically has some option value in having the right to offer a player a max or “supermax” extension. But there are a host of problems with this: Relatively few players are worth the max, and even fewer are worth substantially more than the max. It’s hard to predict who is who. A team doesn’t get a “hometown discount”; instead it has the right to pay more than anyone else to retain a player. And even when a team identifies such a player, he’s under no obligation to sign with it.

In basketball terms, the problem with drafting a guy like Andrew Wiggins is that he might get really expensive right when he gets really good. Or he might take his talents to Los Angeles or Manhattan or South Beach. Teams should probably assume that any surplus value from a draft pick comes from his first four or five seasons and draft on that basis.

There’s a flip-side for sophomores like Marcus Smart. They might get really expensive right when they start to stink — unlike freshmen, sophomores typically begin to decline after about five seasons in the league. An incautious team might sign such a player to a massive extension when he isn’t worth one, as in the case of Rudy Gay and the Memphis Grizzlies. A rational team, however, should be able to resist that temptation — or even exploit other teams’ failure to appreciate the aging curve by trading a player like Smart right when he’s at his peak.

There’s another benefit to drafting sophomores. In addition to being slightly better than freshmen in their first few NBA seasons, they come slightly cheaper. The table below compares the win shares produced by each class of player in its first four NBA seasons10 against the value produced by other players in the same draft position (for instance, a No. 3 overall pick is compared against other No. 3 picks).11 Through their first four NBA seasons, sophomores produce about 10 percent more wins than the average players chosen in their draft slots, while freshmen produce 5 percent to 10 percent fewer wins. Because sophomores are drafted slightly later on average, they’ll also be paid slightly less under the league’s rookie salary scale.

Exploiting a 10 percent edge won’t ensure a team a title. The Celtics will need some luck to build a championship contender around Smart, Rondo and rotation players like Sullinger and Kelly Olynyk. The sophomore strategy isn’t sexy, and other players chosen on Thursday have higher upsides than Smart. But the Celtics are playing the percentages while other teams are playing the lottery.