Indiana Pacers star Paul George suffered a horrifying injury on Friday night in a scrimmage with his teammates on the United States national team. The good news is that surgery on George’s right leg was successful, and he’s in admirable spirits. Furthermore, George’s history of staying relatively healthy in the past could portend a quicker and more complete recovery.

Thanks everybody for the love and support.. I'll be ok and be back better than ever!!! Love y'all!! #YoungTrece

Still, George is expected to miss all of next season. The Pacers went 56-26 last season with George, a total that is only occasionally good enough to translate into a title. The NBA is not a very forgiving sport; any and all weaknesses are exposed over the course of a full season: Losing George would almost almost certainly take them out of title contention for next year.

But like the Chicago Bulls — who adapted around a season-ending injury to Derrick Rose last year — the Pacers are a well-coached and well-managed team in a reasonably good salary cap situation. That means they could maintain respectability next season even without George — or rebuild for 2015-16 and beyond with him.

We can consider what the Pacers might look like next season assuming that George doesn’t play but they otherwise don’t make changes to their roster. I’ll do that by running a projection based on the technique described here, which evaluates players based on their age and performance over the past three regular seasons. In contrast to the previous article, which used a metric called statistical-plus minus, I used ESPN’s NBA Real Plus Minus, which better accounts for a player’s defense — a key consideration whenever you’re talking about the Pacers. (The projection for Croatian Damjan Rudez, the recent Pacers pick up who has not played in the NBA, assumes that he’ll be halfway between league-average and replacement level.) 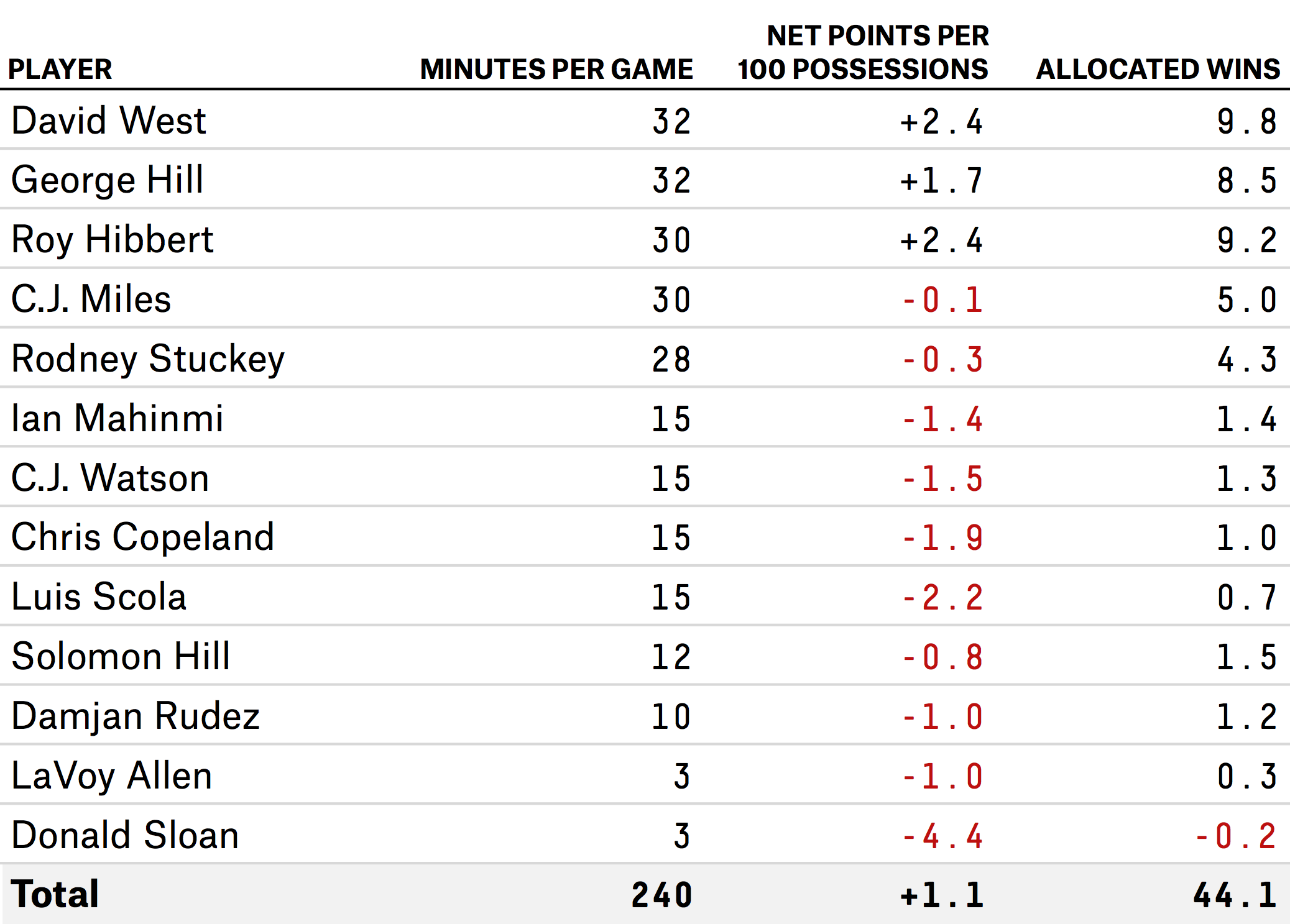 This method projects the Pacers to a 44-38 record, which last year would have translated into a No. 5 or No. 6 seed in the Eastern Conference. It assumes the Pacers will stand pat with their current roster, but they may have the opportunity to sign another rotation player by using a disabled player exception to the salary cap.

Obviously, there’s a huge amount of uncertainty around this forecast. An unselfish roster like Indiana’s might seem better equipped to adapt to the loss of any one player. But the Pacers already had a lot of trouble generating shots with George in the lineup — it will be even harder without him. And while the Pacers should still be strong on defense, the ferocious effort they put forth on the defensive side of the ball could vary as the team’s spirits do.

The Pacers’ other option would be sacrifice the season by dealing Roy Hibbert and David West. That would leave them with only George, point guard George Hill, Rudez and Ian Mahimni signed for the 2015-16 season — a salary commitment of just $30 million total. With cap room and draft picks and good coaching and scouting, there would be the opportunity to build another very good lineup around George, who would be just 25 years old at the start of the 2015-16 season. The injury was an unfair blow to George, but if he can recover, he and the Pacers still have plenty to look forward to.