The New York Knicks have won 55 percent of their games since Carmelo Anthony joined the team in 2011 — a rate that equates to a 45-37 record over a regular season and a first-round exit from the playoffs.

Get ready for more of the same. It’s not that Anthony is a bad player. He’s a very good player — perhaps even an underappreciated player, as my Grantland colleague Bill Simmons notes. He’s improved some problematic aspects of his game, like 3-point shooting, since arriving in New York.

But Anthony’s new contract — reported to be in the range of $125 million over five seasons — will pay him every penny he’s worth. NBA teams win championships by getting players at discounts instead — and Anthony probably won’t qualify. Let’s take a deeper look at the case.

Evaluating an NBA player’s contract requires three things: some measure of his basketball value, a way to translate back and forth between basketball value and the economics of his contract, and a system for projecting how his value will change as he ages.

For our overall measure of basketball value, I’ll be using statistical plus-minus (SPM), a system designed by my FiveThirtyEight colleague Neil Paine. This is the same metric I used to (hypothetically) place LeBron James on different clubs and see how many wins his new team was projected to produce. SPM is usually denominated in points — how much having a player in your lineup changes a team’s scoring margin per 100 possessions — but I’ve translated it to a wins above replacement (WAR) basis instead.

SPM and other plus-minus metrics take a middle ground in valuing shot creation. That’s important for Anthony, an extremely high-volume shooter whose efficiency is only slightly better than average. Other metrics either give a player no credit for taking shots or considerably too much credit for taking mediocre ones.

I don’t want to spend too much time in the weeds of the shot-creation debate — but it’s too important to gloss over in Anthony’s case. My read of the evidence is that we ought to give a fair amount of credit to this skill. Anthony can draw double-teams and create better opportunities for his teammates, who become more efficient shooters with him on the floor — an effect we’ve also observed for James. He can also take tough shots when his team doesn’t have many alternatives — last season, 42 percent of Anthony’s field goal attempts came with eight or fewer seconds on the shot clock compared to a league average of 31 percent.1 In those situations, shooting efficiency drops drastically — but Anthony’s numbers held up well, and he was bailing out his team from a desperation attempt or a shot-clock violation.2

Translating between wins and player salaries is another challenge. I’ve done it a lot in the past — but I’m now convinced I was doing it wrong. A lot of NBA advanced metrics use a zero-win baseline, which implies that if you filled a team with replacement-level players — guys who could be had at the league-minimum salary — it would go 0-82. But it wouldn’t; if you’d fielded a roster last year with actual league-minimum players, that team would have gone about 16-66 instead.

This makes a bigger difference than you might think. Last year, the average NBA team had a payroll of about $67 million and went 41-41. Divide $67 million by 41 wins, and you get a valuation of about $1.6 million per win.

But we should be dividing $55 million by 25 wins instead, which comes out to $2.2 million per win. Where do these numbers come from? The $55 million represents the money a team spends above and beyond the minimum contracts for a 12-man roster,3 and 25 is the number of wins it takes to go from replacement-level (16 wins) to league average (41).

I nudged this $2.2 million number upward further for two reasons. First, the $2.2 million estimate includes players still on rookie-scale contracts, who generally make considerably less than their market rate. Excluding them gets us to a valuation of about $2.6 million per win for free agents. Second, the figure is out of date — the salary cap is increasing by 7.5 percent next season. Assuming player salaries will rise at the same rate, that produces a price of $2.8 million per win in this summer’s free-agent market.4

The last task is to project Anthony’s performance over his next five seasons. There are a lot of quick ways to do this if you’re indifferent to whether the aging curve for a league-average player resembles the one for a star player. But here we’re interested in a star.

So I built something resembling a lo-fi version of PECOTA, the baseball projection system I designed many years ago, which uses comparable players to project an athlete’s career path. Other people have attempted and refined this approach in the NBA, and my version is a work in progress. But it compares players on the basis of a number of attributes: height, weight, position, minutes played and minutes per game, true shooting percentage, statistical plus-minus — and points, rebounds, assists, steals, blocks and turnovers per 36 minutes played. (Not all components are weighted equally.)5. Comparables must be of the same age, so Anthony, who was 29 for most of last season, is compared against historical players in their age 29 seasons.

There isn’t as much choice as in baseball. There are five starters per NBA team rather than nine in Major League Baseball, and I’m using NBA data only from the late 1970s forward rather than the 1940s, as PECOTA did. Furthermore, Anthony is something of an oddball player, being a hybrid between a “big” and a “wing.” But these were the top 10 names the system came up with:

Some of these work better than others, but I was fascinated to see Nowitzki in the No. 1 slot after reading the Simmons article that compared Dirk and Melo. Nowitzki was the better player, but the statistical differences were subtle. Anthony, at age 29, had 25.5 points per 36 minutes along with 7.5 rebounds and 2.9 assists; he shot 45 percent from the floor, 40 percent from 3-point range, and 85 percent on free-throws. Nowitzki, at the same age, has 24.5 points per 36 minutes, 8.6 rebounds, 3.5 assists and shooting numbers of 48/36/88. The difference amounts to about one rebound a game, one assist every other game, two field goal attempts a game, and one shot every two or three games that Nowitzki makes but Anthony misses.

Otherwise, Anthony’s list produces a lot of throwback players — English, Wilkins. In some ways, he fits that hero-ball aesthetic: lots of midrange jumpers (another thing he has in common with Nowitzki). Very high shooting volumes. Good-but-not-great efficiency. Inconsistent defense.

The point is not to argue over whether Nowitzki or Wilkins is the better comp for Anthony — further refinements to the method might change the ordering and remove some of the more dubious names from Anthony’s list (like Patrick Ewing, Melo’s No. 16 comp). But we can get a basic sense for how high-volume scorers (who otherwise aren’t grossly dissimilar to Anthony) held up as they entered their 30s. That’s what’s reflected in the chart below, which lists each player’s WAR from age 27 through 34.6 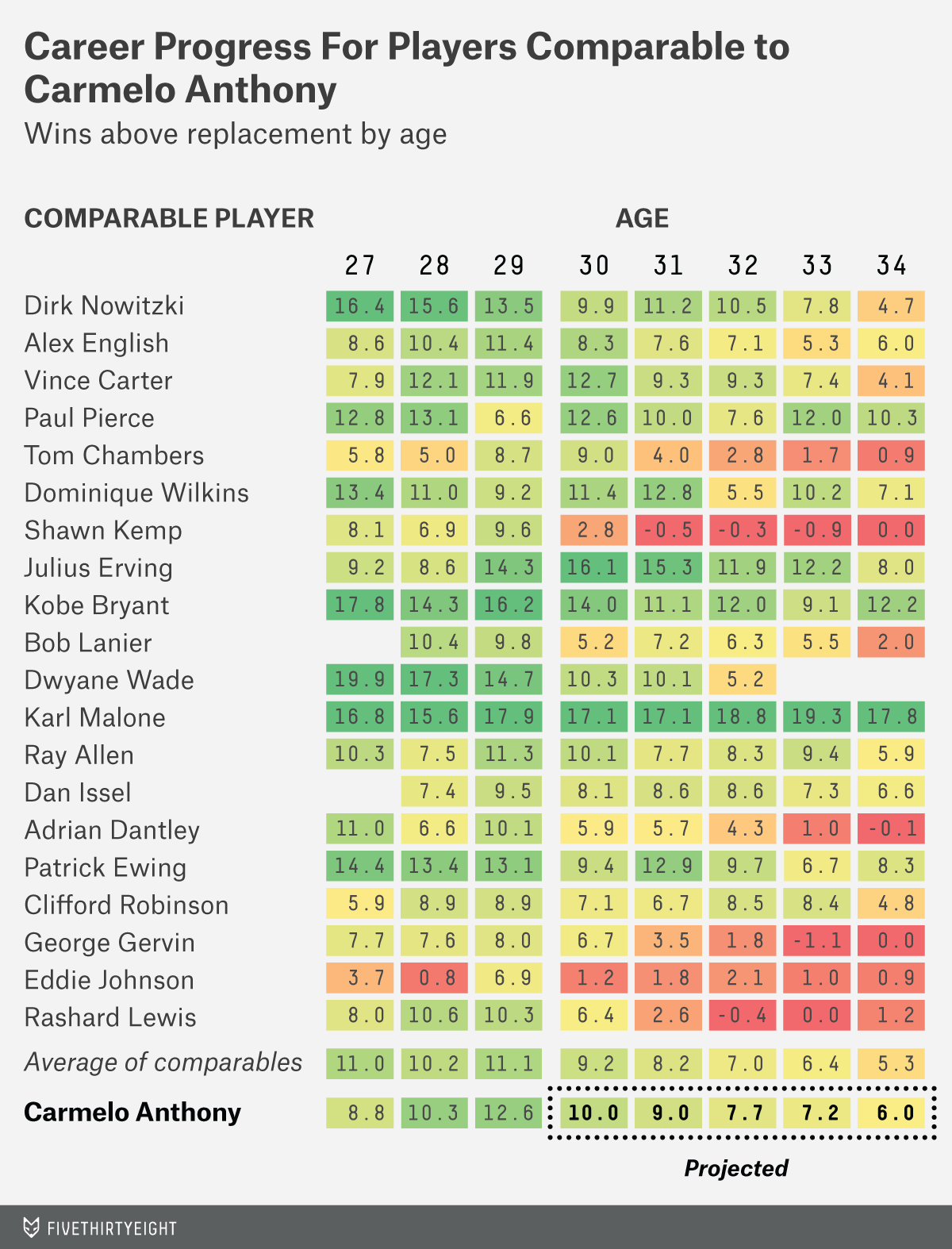 The average Carmelo comparable averaged about 11 wins per season from age 27 through 29. But he declined to nine wins in his age 30 season and then lost about one more win in every subsequent year.

It isn’t a total disaster: Some comparables, such as Kemp and Adrian Dantley, had abrupt ends to their careers, but others like Nowitzki and Paul Pierce held most of their value through their mid-30s. All of these guys were starting from a high baseline, so they could lose some value and still be worthwhile players. But the overall trend is uniform: All but two of Anthony’s comparables were more valuable at age 29 than at age 32.

We can value Anthony’s contract by applying our wins-to-dollars translation.7 I’ve adjusted his projection slightly upward because he was slightly better than his average comparable in his age 29 season.8 It results in an estimate that Anthony is worth about $122 million over the next five years — almost exactly what the Knicks will be paying him.9 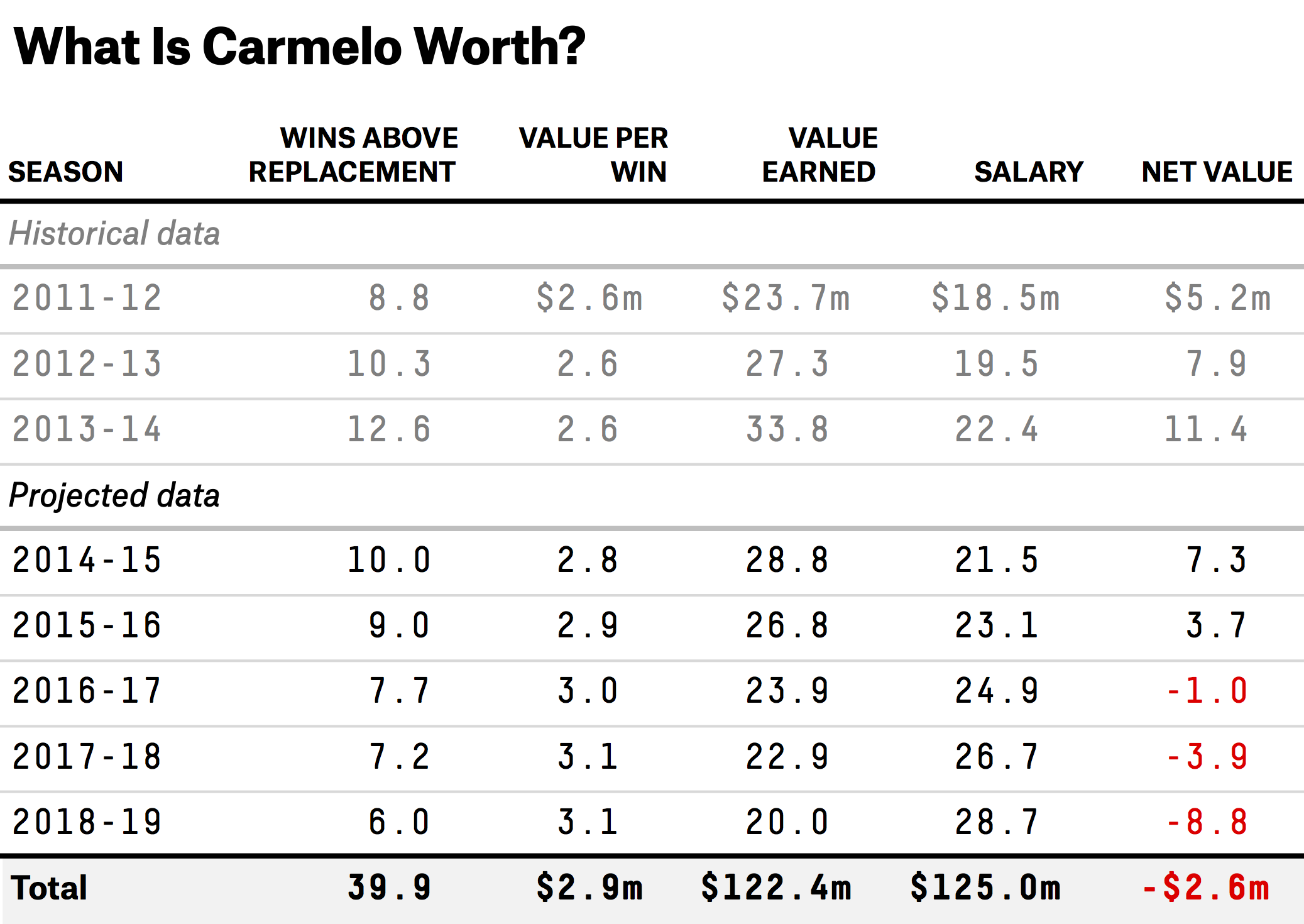 So, what’s the problem? Actually, there are two. One is that Anthony’s value is front-loaded — he projects to be worth about $7 million more than his salary next season. But by age 34 — in the 2018-19 season — he’ll be worth $9 million less than his salary. That’s inconvenient for the Knicks, who will have much more opportunity to improve their roster in the summers of 2015 and 2016 than they do this year.

The more fundamental issue is that teams don’t win NBA championships by paying players fairly: They need to sign them for less than they’re worth. To a first approximation,10 a team of players paid at their market rate will finish at the league average record of 41-41.

Could a roster built around Anthony win the championship? Simmons makes the case that it could — in part because of the comparison to Nowitzki, who won one in Dallas.

If taken literally, the question is absurd. A team on which Anthony was the best player and every other player on the 12-man roster was just a bit worse than Anthony (a borderline All-Star who complemented Anthony’s skills) would be a prohibitive championship favorite and would probably post a win total somewhere in the 70s. Further, we could argue for hours about whether Anthony would qualify as the best player on some teams that did win the championship, such as the Bad Boys Pistons or the Pistons’ 2003-04 team — or perhaps even last year’s World Champion San Antonio Spurs.

It’s also possible to construct plausible championship-caliber lineups for next season on which Anthony would be the best player. For example, consider a team with a starting five of Anthony, Damian Lillard, Danny Green, Paul Millsap and Marc Gasol. For the reserves, we’ll use some actual Knicks: Pablo Prigioni, J.R. Smith, Iman Shumpert, Kenyon Martin and Cole Aldrich. That team would project to 63 or 64 wins, according to my system. You could just barely fit it under the salary cap if Anthony agreed to play for $15 million next year instead of somewhere in the $21 million range.

That team relies on a number of underpriced assets: Anthony at well under the max; Green for next to nothing; Lillard on his rookie-scale deal. Even with one overpriced player in Smith on the roster, those contracts more than pull their weight.

But in practice, it may be easier to build a team around a singular superstar like LeBron. Historically, teams with an MVP-caliber player like James are about three times more likely to win championships than those with mere All-Star starters like Anthony.

The reason may be the league’s maximum salary: James is worth something like $45 million per season by this method but will make only about $20 million. Surround James with 11 league-average players, paid at their market rate, and his team would be projected to win about 56 games. Add in one other favorable contract to the mix, and it would be somewhere in the 60-plus win range and a championship front-runner. It isn’t easy to find a LeBron, obviously. But the league’s very best players are so underpaid that getting one of them can be as valuable as signing three or four Lillards or Milsaps or Greens to pretty good deals.

That didn’t make this an easy call for the Knicks, who had neither course available. Nor would dropping Anthony have provided for a clear path forward.11 In poker, good players put their opponents in positions where all of their options are equally bad — and bad poker players put themselves in those positions. The Knicks are suffering for past sins: the assets they gave up for Anthony in 2011 when they could have signed him as a free agent; the horrible deal given out to Amar’e Stoudemire; the inexplicable trade for Andrea Bargnani. Jimmy Dolan played a bad hand, and he’s paying the price.