Within hours of LeBron James’s announcement that he’d be going home to Cleveland, Kevin Love was already musing about how “intriguing” it would be to play alongside James if the Minnesota Timberwolves traded him to the Cavs. In Minnesota, Love was opposing defenses’ chief concern. In Cleveland, next to James, he wouldn’t be. James has made terrifying strides in offensive efficiency and returns a better, more-dominant player than when he left.

Earlier FiveThirtyEight analysis didn’t pick the Cavaliers as James’s ideal destination if his goal is to quickly win more titles, but Cleveland has some solid pieces already in place. And those pieces are going to get even better.

In 2010, James left a Cavaliers squad that scored 102.1 points per game, tied for ninth in the NBA. That year Cleveland won 61 games en route to the Eastern Conference semis and featured a deceptively useful supporting cast; members of the squad who weren’t James shot a combined 48 percent from the field and 40 percent from beyond the arc. Nine players returned for 2010-11, the first season without James, and they all shot worse. The table below shows how these players’ true shooting percentage (which accounts for threes and free throws) performed in James’s absence: 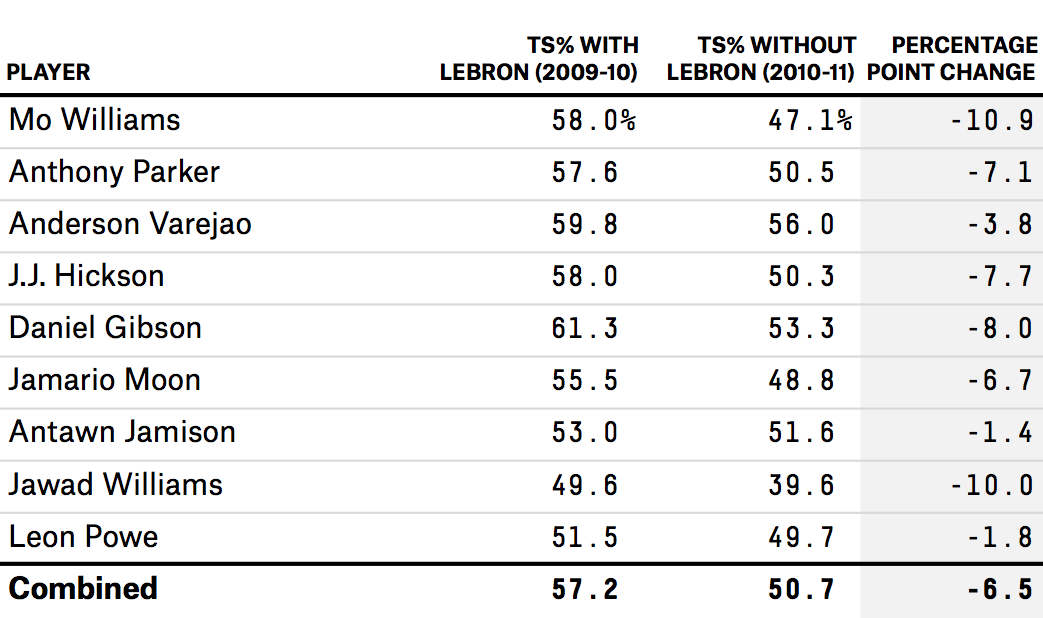 That’s an annihilation. Without James, all nine players saw a drop in true shooting and the team finished with only 19 wins. We can’t chalk up all that difference to James’s absence; the Cavs also dropped an old but effective Shaquille O’Neal, role players Delonte West and Zydrunas Ilgauskas, and five bit players. But much of the core was still there; Mo Williams, Anthony Parker, Anderson Varejao and J.J. Hickson were second only to James in minutes played the previous year. If they were good enough to keep the team afloat, we would’ve seen it.

Cleveland’s loss was Miami’s gain. The Heat squad that James (and Chris Bosh) joined included seven players from the previous season, who had accounted for 53 percent of that squad’s minutes. Here’s how these seven players improved upon James’s arrival:

Although these improvements weren’t as dramatic as the Cavs’s losses, there was still an across-the-board bump in true shooting. Presumably, Kyrie Irving, Varejao and Tristan Thompson will get the same kind of help when James takes the court with them next season.

But that change may be dwarfed by the one in Miami. Whoever’s left in Miami when the dust clears — as of now, the Heat only have Bosh and Norris Cole under contract — should expect more defensive pressure in James’s absence. If the 2010-11 Cavs are any indication, it might get ugly.