On Thursday, after LeBron James and the Miami Heat won their second consecutive N.B.A. championship, I noted on Twitter that James was on the same pace as the Chicago Bulls great Michael Jordan. Both James and Jordan won their first championship at 27 and their second at 28, I wrote. Jordan went on to win four more N.B.A. titles, for a total of six. 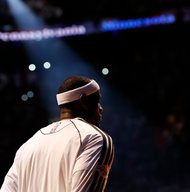 Mike Segar/Reuters LeBron James and Michael Jordan were about the same age when they won a second championship.

My statement depended on a technicality, I later discovered: Jordan’s biological age was 28 when he won his first championship, in 1991, and 29 when he won his second, in 1992. However, basketball statisticians generally define a player’s age differently: by how old he was as of Feb. 1 of an N.B.A. season, the rough midpoint of the basketball calendar. Jordan’s birthday is Feb. 17.

Those semantics aside, it is worth considering just how likely James might be to match or exceed Jordan’s six titles. (From this point on, we’ll use basketball statisticians’ definition of age.)

Players like Jordan and James are so rare that it can be risky to compare them with anyone. Still, one reasonably useful benchmark is to evaluate players who, like James and Jordan, had won at least one Most Valuable Player award and at least one N.B.A. title as of their age-28 season, meaning that they had achieved the pinnacle of both individual and team success.

By my count, there were 13 such players before James. On average, they won about two additional championships (more precisely, an average of 1.9) after their age-28 season. So a reasonable over-under line for James might be two more N.B.A. titles, or four total. 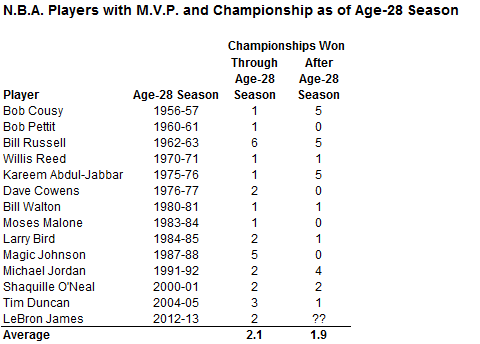 It is tough to say exactly what James’s odds of catching Jordan might be, because the average conceals a wide range of outcomes among the individual players. Four of the players on the list — Magic Johnson, Moses Malone, Bob Pettit and Dave Cowens — never won another championship after their age-28 season. But four others — Jordan, Bill Russell, Bob Cousy and Kareem Abdul-Jabbar — won at least four more titles.

James needs four more championships to catch Jordan, so one estimate of his odds might be 4 chances out of 13, or about 30 percent. But some of the favorable precedents, like Russell, came in an era when teams had far more ability to retain their players. Among the players on the list who played their age-28 season during the salary-cap era (since 1984-85), only Jordan won four or more titles. 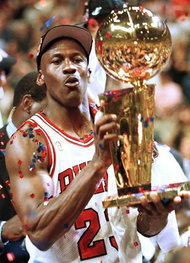 Jeff Haynes/Agence France-Presse — Getty Images Jordan after his fifth title with the Bulls.

It seems safe to say that you would not want to bet on James at even money. There are just too many things that can go wrong with a player’s career as he ages: injury or illness, early retirement, bad teammates or bad luck.

Even this year’s Heat began the season with only about a 30 percent chance of winning the title, according to the Las Vegas odds. That percentage roughly matches the historical likelihood of an N.B.A. team’s repeating as champion, which is 33 percent.

So James’s chances of winning a third title next season in Miami are probably about 1 in 3. After that, his chances begin to decline. For one thing, it is less certain that James will be surrounded by strong teammates. (James has the right to opt out of his contract after next season, and even if he stays in Miami, teammates like Dwyane Wade are already seeing their skills atrophy.)

More important, players in team sports typically peak in skill in their mid- to late 20s, meaning that James’s game may begin to wane. The N.B.A. is a superstar’s league, and if James goes from being M.V.P.-caliber to mere All-Star within a few years, it will considerably hurt his odds of winning more titles.

I have estimated a player’s chances of winning an N.B.A. title based on his win shares, a statistic calculated by Basketball-Reference.com that measures overall value to a team. Since the introduction of the salary cap in 1984-85, excluding the two regular seasons (1998-99 and 2011-12) that were shortened by labor disputes, the best player in the league in a given season has averaged about 18 win shares, which is a reasonably good match for James’s performance over the last several years. The model estimates that such a player has about a 20 percent or 25 percent chance of winning the championship in today’s N.B.A. environment. 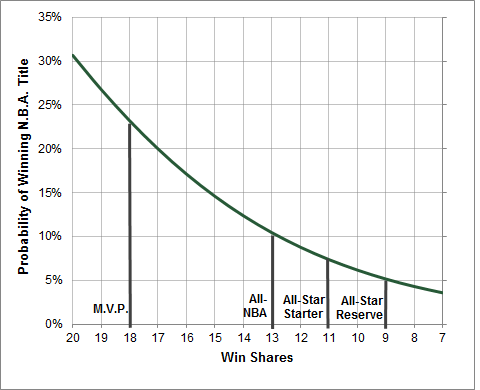 What about the fifth-best player in the league — someone equivalent to the worst player on the All-N.B.A. team? That player has averaged about 13 win shares, which translates to only about a 10 percent chance of winning the championship.

The 10th-best player in the N.B.A. at a given time has only about a 7 percent chance of winning a title, according to the model. And the 25th-best player — someone who might be the last reserve added to one of the conference All-Star teams — has about a 5 percent chance.

That is not much better than an N.B.A. player chosen at random, who has a 3.3 percent chance of becoming a champion by virtue of being on one of the 30 teams. A borderline All-Star in the N.B.A., in other words, is much closer to being a role player than a superstar, at least when it comes to his odds of winning a championship.

James, of course, will have considerable freedom to pick his employer. If he puts winning titles above all other considerations, he could sign on for any role with the team he perceived as having the best chance to win the championship in a given season.

Few players in N.B.A. history have been willing to take things to quite that extreme. Instead, superstars expect teams to build around them — even if they are past their prime, and even if it means something as inglorious as Jordan’s late years spent with the Washington Wizards.

One can forgive Jordan, who did not have anything left to prove. But to match him, James will need to win two or three more titles over the next several seasons while he still plays at an M.V.P. level, which will require good health and some good luck. Then he may need to chase the last couple of titles by being willing to play the right role with the right club.