This Thursday, ESPN1 will air its latest “30 for 30” documentary special, “Bad Boys,” which explores the notorious Pistons era that brought Detroit back-to-back NBA championships 25 years ago. Along with my colleagues at Grantland who are running “Detroit Week,” I’ll be publishing articles relating to the “Bad Boys” narrative and legacy. This is Part 1, in which I’ll examine whether the Bad Boys really earned their nickname.

How “bad” were they? That seems like just the kind of thing a data-driven operation might want to quantify. But to figure it out we have to first make sense of what “bad” means in the Bad Boys narrative.

Wikipedia lays it out as bare fact that the Pistons’ “physical, defense-oriented style of play” was responsible for the nickname. Sports Illustrated adds a touch of violence, listing “on-court mayhem” as one of the main ingredients. ESPN’s promotional material for its new film makes a telling generalization:

For some, the team was heroic — made up of gritty, hard-nosed players who didn’t back down from anyone. And for others, it was exactly that trait — the willingness to do seemingly anything to win — that made them the “Bad Boys,” the team fans loved to hate.

There may not be full agreement among sources, but this “willingness to do seemingly anything to win” formulation is key to the qualitative aspect of the Bad Boys narrative. It’s also something we can begin to assess empirically.2

When we hear that a player or team is “willing to do anything to win,” it often means they’re willing to practice more than the next guy, spend more time studying film or drawing up plays, or any of the things that we associate with being a good sport. But there’s another connotation: that an athlete or team is willing to do things that others aren’t. They’re willing to transgress the norm of sportsmanship — to be unsportsmanlike in order to gain an advantage.

Fortunately, there’s a statistic that captures unsportsmanlike conduct: technical fouls. It’s enshrined right there in Rule 12 of the Official Rules of the NBA:

A technical foul shall be assessed for unsportsmanlike tactics such as:

(3) Overt actions indicating resentment to a call

(6) A deliberately-thrown elbow or any attempted physical act with no contact.

Though there are some technical fouls not relating to unsportsmanlike behavior, and some behavior that doesn’t ever get penalized, this stat is the closest we have to an official determination of “bad” behavior.

But willingness to transgress sportsmanship is meaningless if it doesn’t actually gain you an advantage. If you’re just violating competitive or moral norms for no reason and you’re actually worse off for it, people won’t even respect you enough to hate you for it. So for a team to earn a nickname prominently declaring how “bad” it is, the players should be using their badness to make them better.

To see how the Bad Boys Pistons rated in both badness (technical fouls) and goodness (winning), let’s start with a simple scatter plot showing the technical foul rates for all teams since 1982 against their win percentages3: 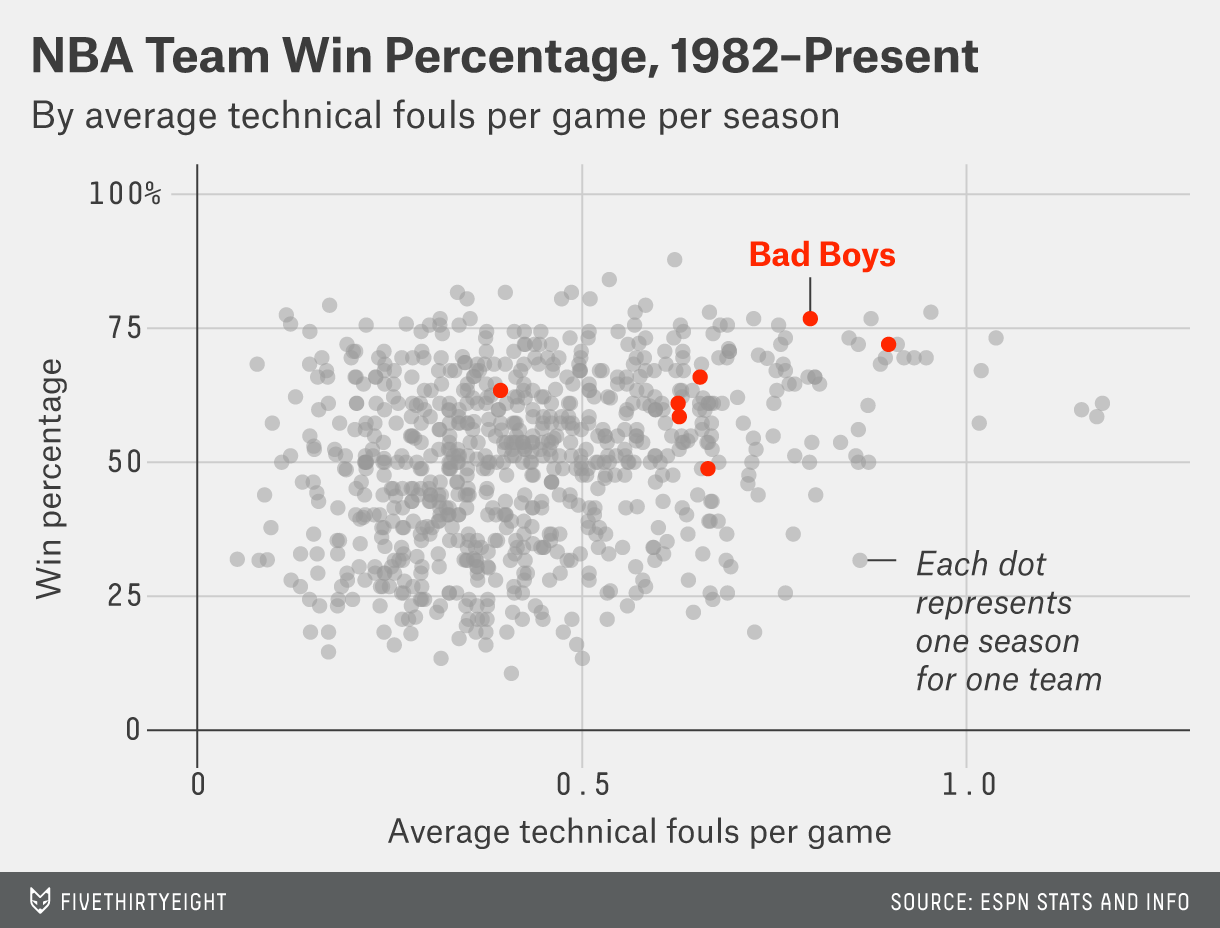 The Pistons between 1986 and 19924 are the red points. If the first thing you notice is a curiously strong relationship between technical rate and winning (note that every team that had more technicals than the “baddest” Pistons team had a good record), kudos! But we’re going to put that on ice until my next article later this week.

So the Pistons look pretty bad, but even their baddest team (1989’s) had only the 15th most technical fouls since 1982. The 1995 Seattle Supersonics (who came within two games of beating the 1995 Chicago Bulls for the NBA title, which is probably more impressive than most championships) were badder and better than both the baddest and the best Pistons squads. 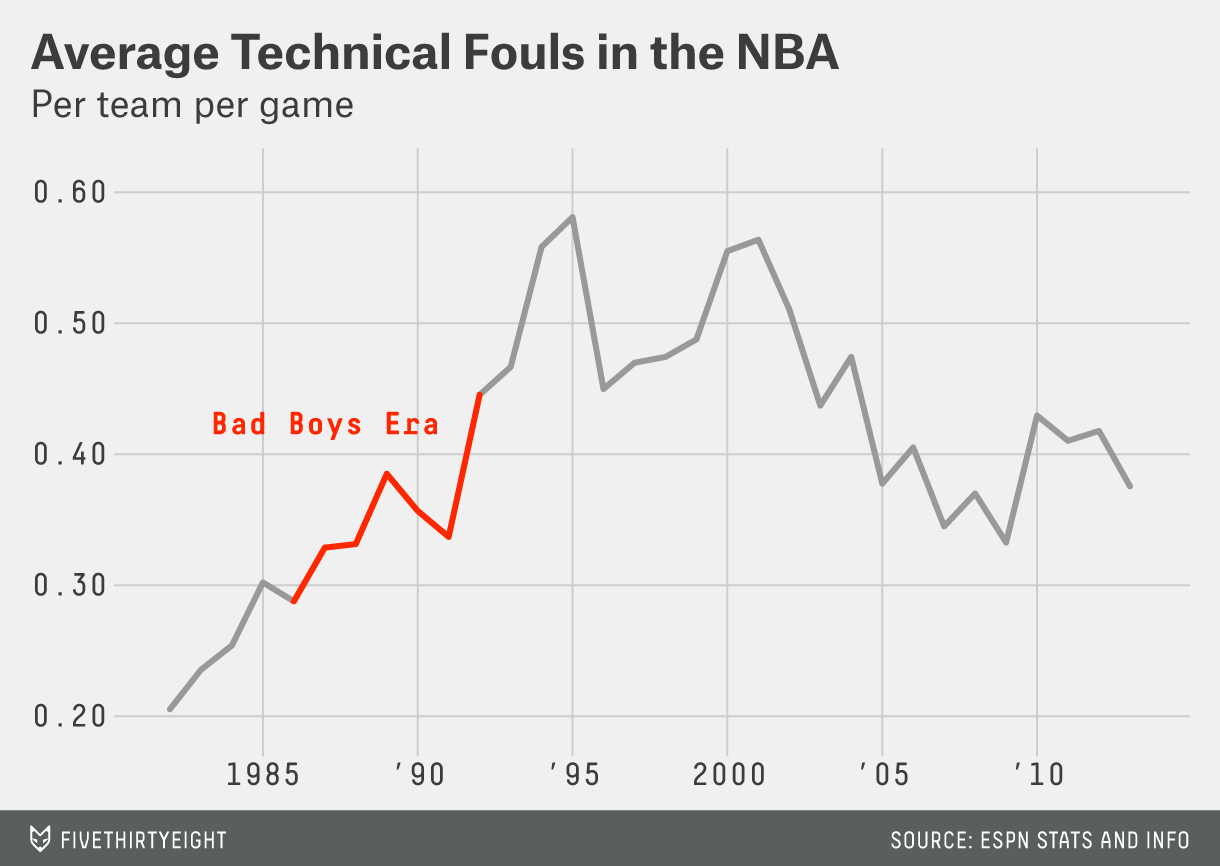 The red part is the “Bad Boys Era,” though the numbers are league-wide.5 Meanwhile, that 1995 SuperSonics squad came at the all-time peak for technical fouling.

To see how these Pistons would have looked to people in their era, here’s the first graph above, but with all the non-Detroit teams after 1988 filtered out. 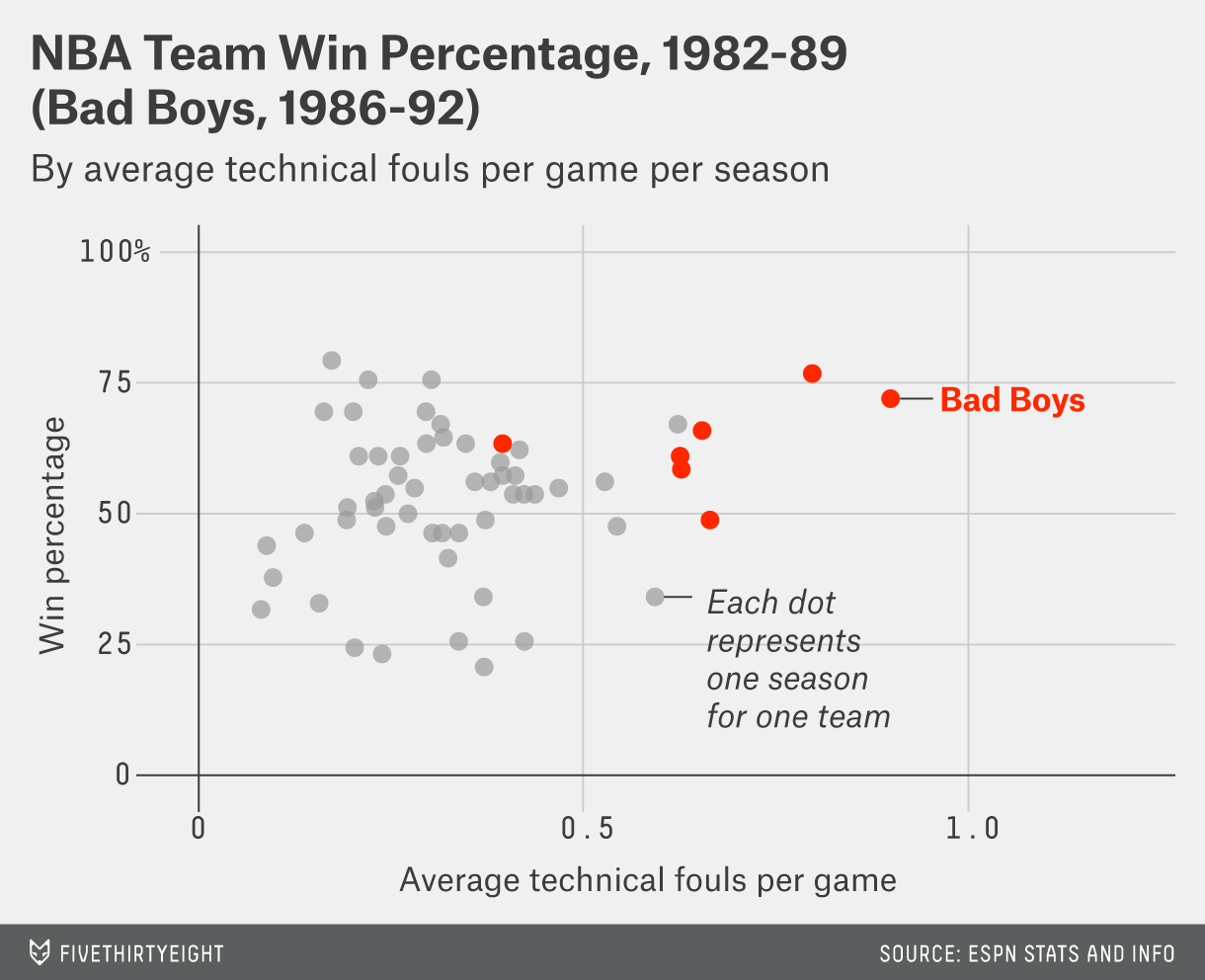 Now that’s more like it. All six of the seasons after 1986 (Dennis Rodman’s rookie year) are badder than every season prior to 1989 in our data set.6 Detroit only finished one season below .500,7 and won two championships in the other seasons.

In addition to the shifting strategic landscape, a variety of otherwise minor rule changes, rule clarifications and scorekeeping instructions in the NBA may affect cross-era comparison (such as breaking out flagrant fouls into their own category, or turning illegal defenses into 3-second violations). But we can compare each team’s performance in a given season to what the rest of the league was doing at the time.8

To do this, I took the technicals per game for every team with 10,000-plus minutes recorded in our data set and divided it by the league average for the season. I then ranked the teams by their “badness” relative to their contemporaries and plotted them in rank order. In all, I plotted every qualifying team from 1982 through last week.9 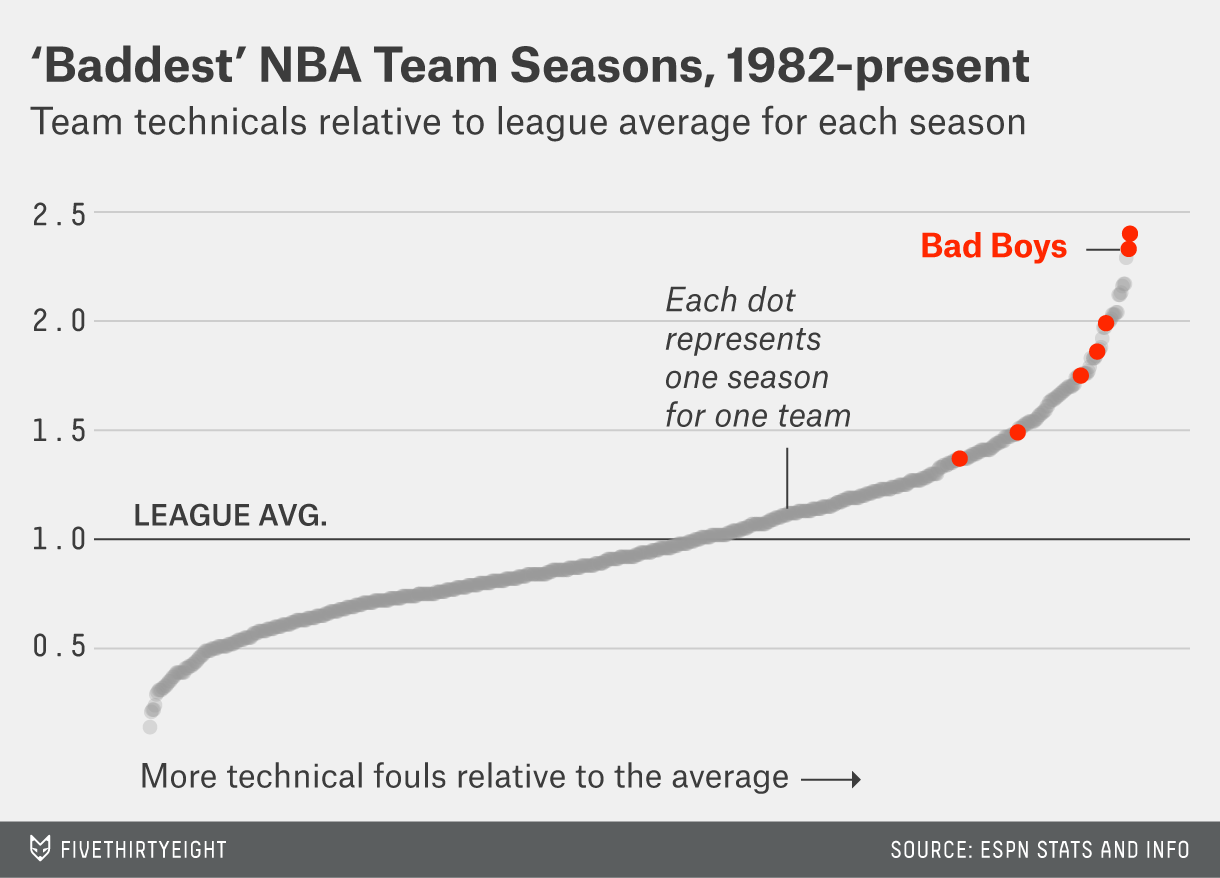 Boom! Using badness relative to a team’s era as the measure, the top two baddest teams are the two Bad Boys teams that won championships. For once, a harder look at the data seemingly confirms rather than undermines a popular sports narrative.

But there’s something even more fascinating going on here: Technical fouls are bizarrely predictive of success. Individually, they give the other team a free attempt at another point, which should have about the same effect on the game as a turnover; they have no business indicating strength as well as they do. But they do. Not only are better teams more likely to get technicals (and vice versa), but “bad” plays may themselves add value. In other words, the Bad Boys may have been onto something.

How and why this effect works turns out to be a fascinating and complex issue, and it will be the subject of the next article in this series, out later this week.