The Seattle Seahawks began the season ranked No. 1 in FiveThirtyEight’s NFL Elo ratings. After flirting with the top position for the past two weeks, they reclaimed it on Sunday after crushing the Arizona Cardinals 35-6. The previous No. 1, the New England Patriots, also won on Sunday, but in much less impressive fashion, defeating the New York Jets 17-16. So Seattle’s Elo rating is now 1755, ahead of New England’s 1730. 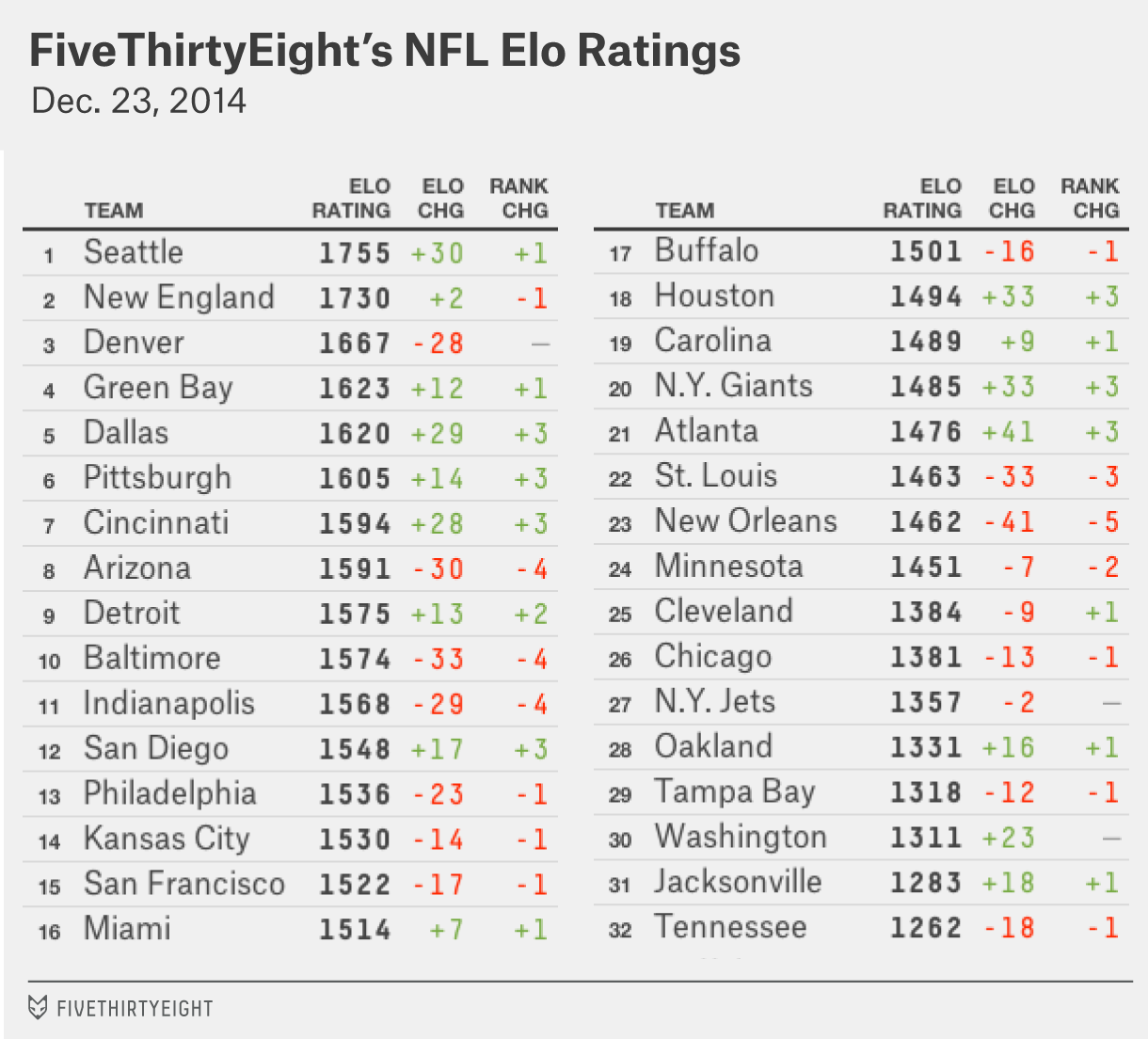 These numbers may seem arbitrary. But we’ve back-tested the Elo ratings to 1970, when the NFL and AFL merged. Any rating above 1750 is very impressive. Since 1970, only 21 teams finished a season with a rating that high. 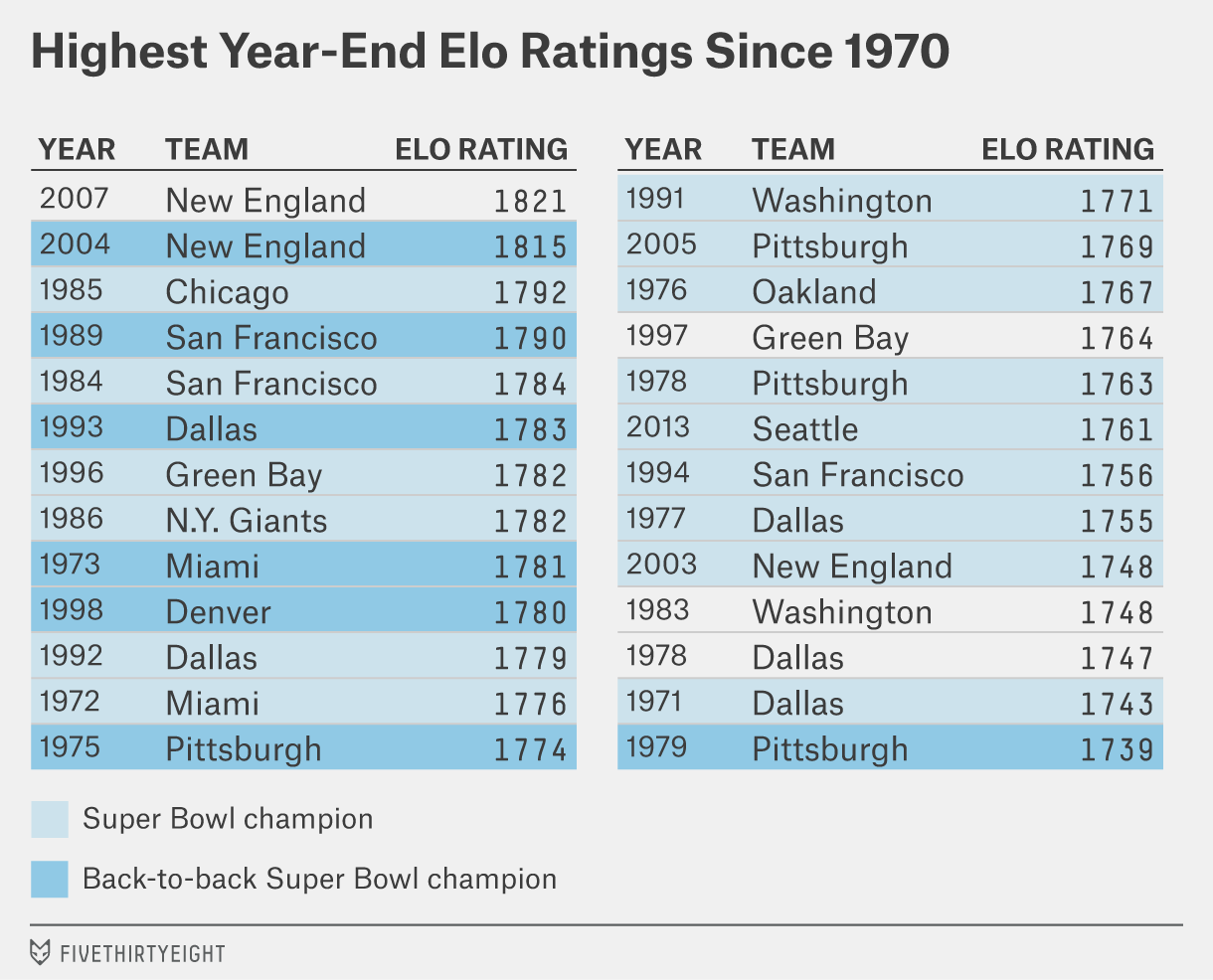 If the Seahawks win the Super Bowl again this year, they should be in the conversation about the greatest team ever — at least according to Elo. In the 32 percent of simulations we ran this week where Seattle won the Super Bowl, it finished with an average Elo rating of 1799. That would rank as the third-best end-of-season Elo rating since 1970, behind only the 2007 Patriots (who hold the top spot despite having been upset by the New York Giants in Super Bowl XLII) and the 2004 Patriots — and just ahead of the 1985 Chicago Bears and the 1989 San Francisco 49ers.

Yes, we’re getting ahead of ourselves (as we have before with Seattle). The 2014 Seahawks haven’t won anything yet. But it’s worth explaining why the system likes them so much.

Strong performance over a multi-year period. Elo ratings partially carry over from season to season, so a team can build momentum if it posts two or more good seasons in a row. This is part of why, for instance, the 1973 Miami Dolphins finished with a higher Elo rating than the undefeated 1972 Dolphins. (The 1973 edition of the team also had other things to recommend it, like having played a much tougher schedule.)

When Russell Wilson took over as Seattle’s quarterback at the start of the 2012 season, the Seahawks rated as a roughly league-average team with an Elo rating of 1491. (The average Elo rating is 1500.) Wilson went 4-4 in his first eight NFL starts. But since then, his trajectory — and the Seahawks’ — has been almost entirely upward. The Seahawks went 7-1 in the second half of 2012, then traveled to Washington to beat the Redskins in the wild-card round of the playoffs. Then, Seattle nearly defeated the Atlanta Falcons in the divisional round, coming back from a 27-7 deficit to pull ahead 28-27 before Atlanta kicker Matt Bryant notched the winning field goal with just 13 seconds to go. 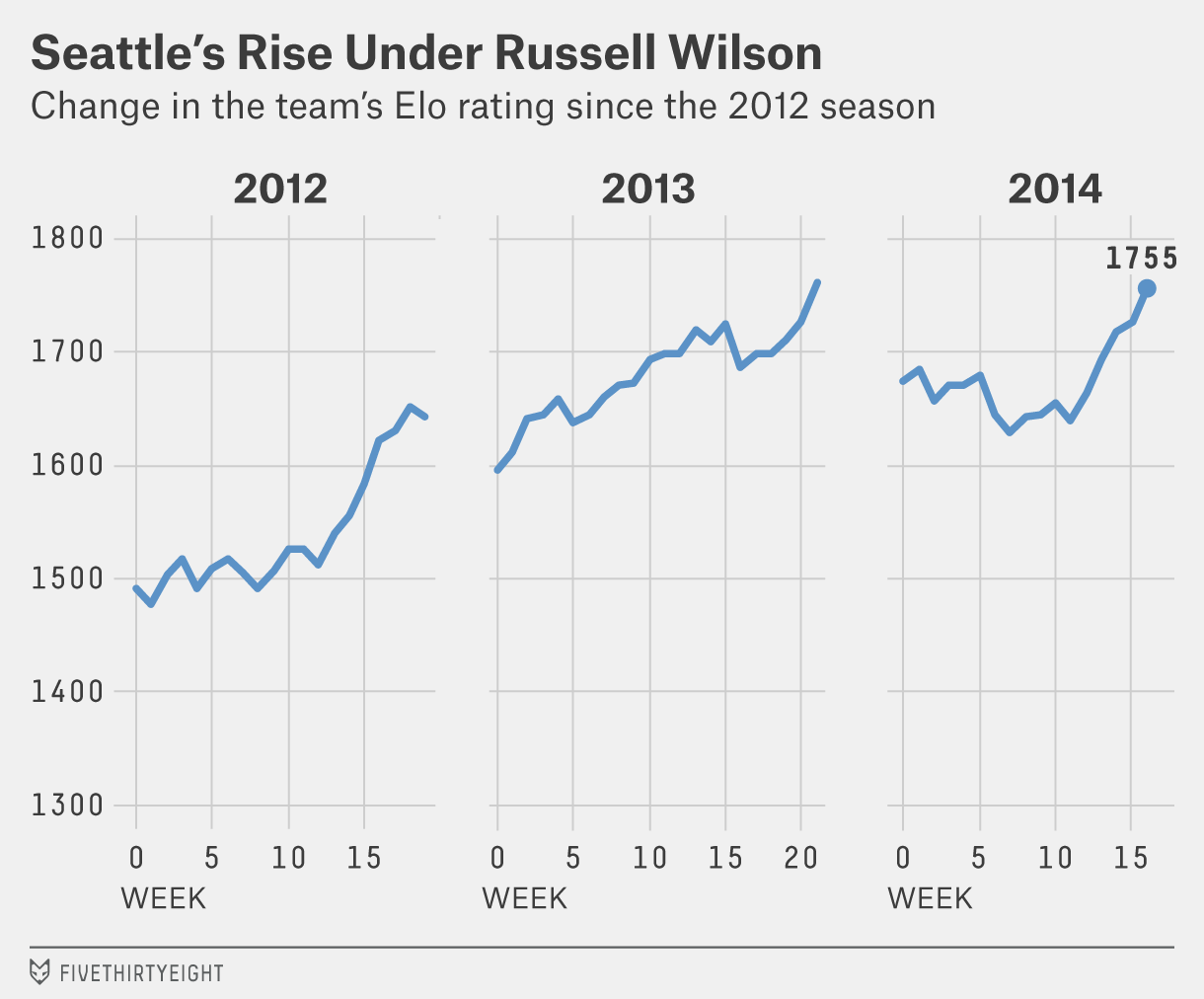 Finishing strongly has been a hallmark of Wilson’s teams: Consider the Seahawks’ second-half run in 2012, their dominance in the playoffs in 2013, and what’s now been a five-game winning streak and counting in 2014.

A tough schedule with plenty of “clutch” wins against excellent opponents. All five of the Seahawks’ recent wins have come against tough opponents: two against Arizona, which Seattle has just overtaken for the top spot in the NFC West; another on the road in Philadelphia; and two others against San Francisco, the Seahawks’ longtime rivals. The Seahawks’ Elo rating has improved by 75 points during the winning streak.

This has been typical of Wilson’s tenure in Seattle: The Seahawks have regularly risen to the occasion against tough opposition. Over the past two seasons, the Seahawks are 10-1 when facing opponents with an Elo rating of 1600 or higher. 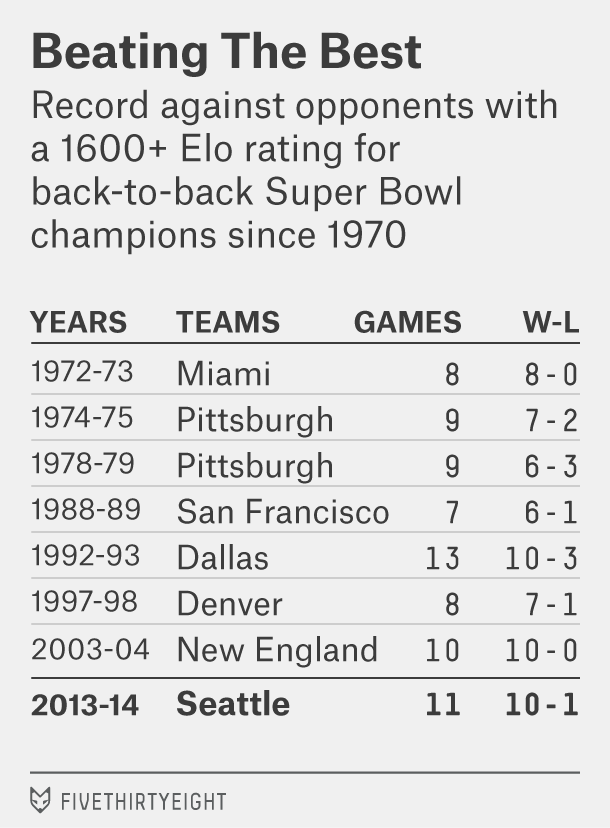 Elo places a lot of emphasis on these “big” games; they’re the real test of a team’s strength. Even by the standards of the NFL’s all-time great teams, this is both a lot of big games to have played and a very impressive record in them. Compare the Seahawks against the seven teams to have won back-to-back Super Bowls since the NFL-AFL merger. Only the 1992-93 Dallas Cowboys played in more big games — 13 — and they lost three of them. And the Seahawks still have a chance to add to their list; they’ll probably need to defeat two or three more 1600+ Elo teams to win the Super Bowl again.

Consistency, even in defeat. While the Seahawks have won a lot of huge games, they’ve also occasionally been beaten by mediocre opposition. But they still rate as very consistent because these losses have come by narrow margins.

Wilson, in a career that spans 52 regular-season and playoff games, has never lost a game by double digits. And in each of the 13 losses he’s taken, the game has come down to the final quarter:

So Wilson has basically never been out of a game in 208 quarters of NFL football. Elo does not consider this degree of detail — it only looks at the final scorelines — but this is impressive. The Seahawks have been competitive in every game and outstanding in their biggest games for two or three years now. If they win another Super Bowl, their accomplishments will stack up pretty well against other back-to-back champions.

The rest of the NFL playoff hunt around the Seahawks has become anticlimactic. Ten teams, including Seattle, have now clinched the playoffs. The only remaining slots are for the champion of the NFC South — whichever of the 6-9 Atlanta Falcons and 6-8-1 Carolina Panthers wins on Sunday (after playing against each other) will advance from the division despite a losing record — and one remaining position in the AFC, which is being contested among the San Diego Chargers, the Baltimore Ravens, the Houston Texans and the Kansas City Chiefs. Here’s how Elo has the odds: 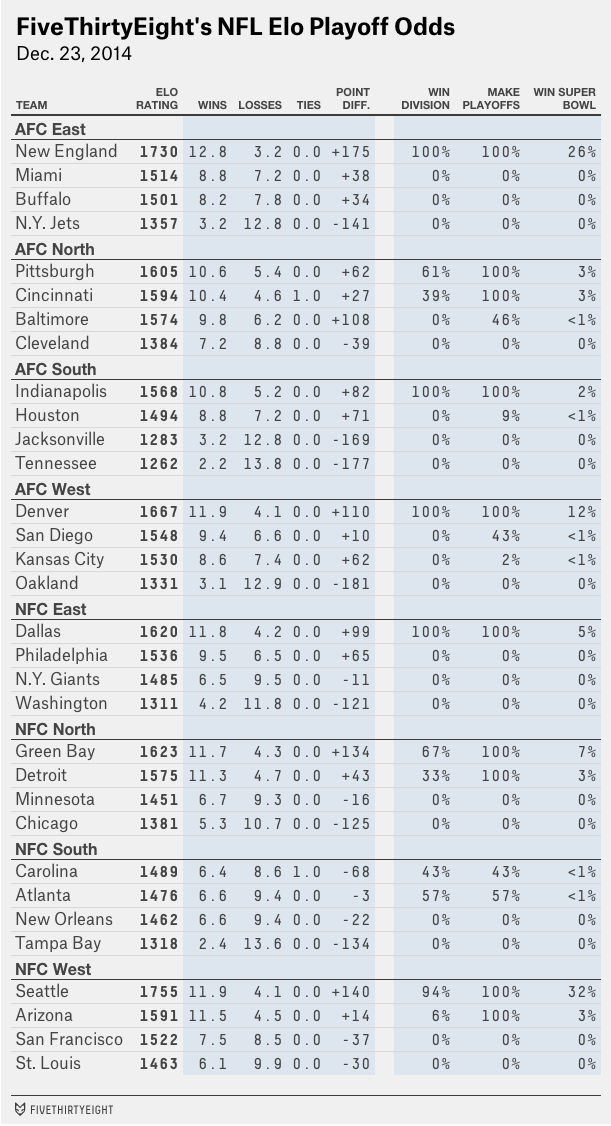 Although the Chargers have the most straightforward path to the playoffs — if they beat Kansas City, they’re in — Elo gives them a slightly lower chance of making the postseason (43 percent) than the Ravens (46 percent). That’s because the Chiefs are slight favorites in the game, which will be played in Kansas City. The Ravens, by contrast, are 81 percent favorites to win at home against the Cleveland Browns. Even needing San Diego to lose, Baltimore is a (slightly) better bet.

The Texans and Chiefs are long shots. Houston needs to win — which won’t be hard since its opponent is Jacksonville — but it will also need both San Diego and Baltimore to lose. There’s only a 9 percent chance of this happening. And while the Chiefs can take out the Chargers themselves, San Diego will need both Baltimore and Houston to lose. Since both Baltimore and Houston are heavy favorites in their games, that leaves Kansas City with just a 2 percent playoff probability.

Although all NFC teams but Atlanta and Carolina have either clinched or been eliminated from the playoffs, a few of them still have some business to take care of, including Seattle. The Seahawks could be demoted into a wild-card slot, essentially erasing the impact of their win over the Cardinals last week, if they lose to St. Louis and Arizona beats San Francisco to claim the NFC West title. Missing out on the division crown would deny Seattle a first-round bye and home-field advantage and cut its Super Bowl chances from 32 percent to 14 percent. It would also resurrect Arizona’s chances, which are down to just 3 percent after its loss last week; the Cardinals’ chances of a championship would rebound to 13 percent if they back into the division title. Unfortunately for the Cardinals, the combination of a Seahawks loss and an Arizona win has only about a 6 percent chance of happening.

Seattle will also clinch home-field advantage throughout the NFC playoffs if it wins — except under the bizarre scenario where the Green Bay Packers and Detroit Lions tie in Green Bay while Dallas beats Washington, which would give the Cowboys the No. 1 seed on the basis of their head-to-head win in Seattle earlier this season. But there’s only about a 1-in-700 chance of that happening.

Green Bay is about a 2-to-1 favorite against Detroit, according to Elo. But the system gives the Packers only a 7 percent chance to win the Super Bowl — much lower than offshore betting markets, which put their chances at about 13 percent. Elo has disagreed with bettors about the Packers all season, although less so as the year has worn on. In this case, the disagreement may have more to do with the Seahawks. The Packers will clinch a first-round bye with a win, but they’d still probably have to beat the Seahawks in Seattle to win the NFC Championship — a game in which the Seahawks would be roughly 75 percent favorites according to Elo but more like 65 percent favorites according to Vegas. 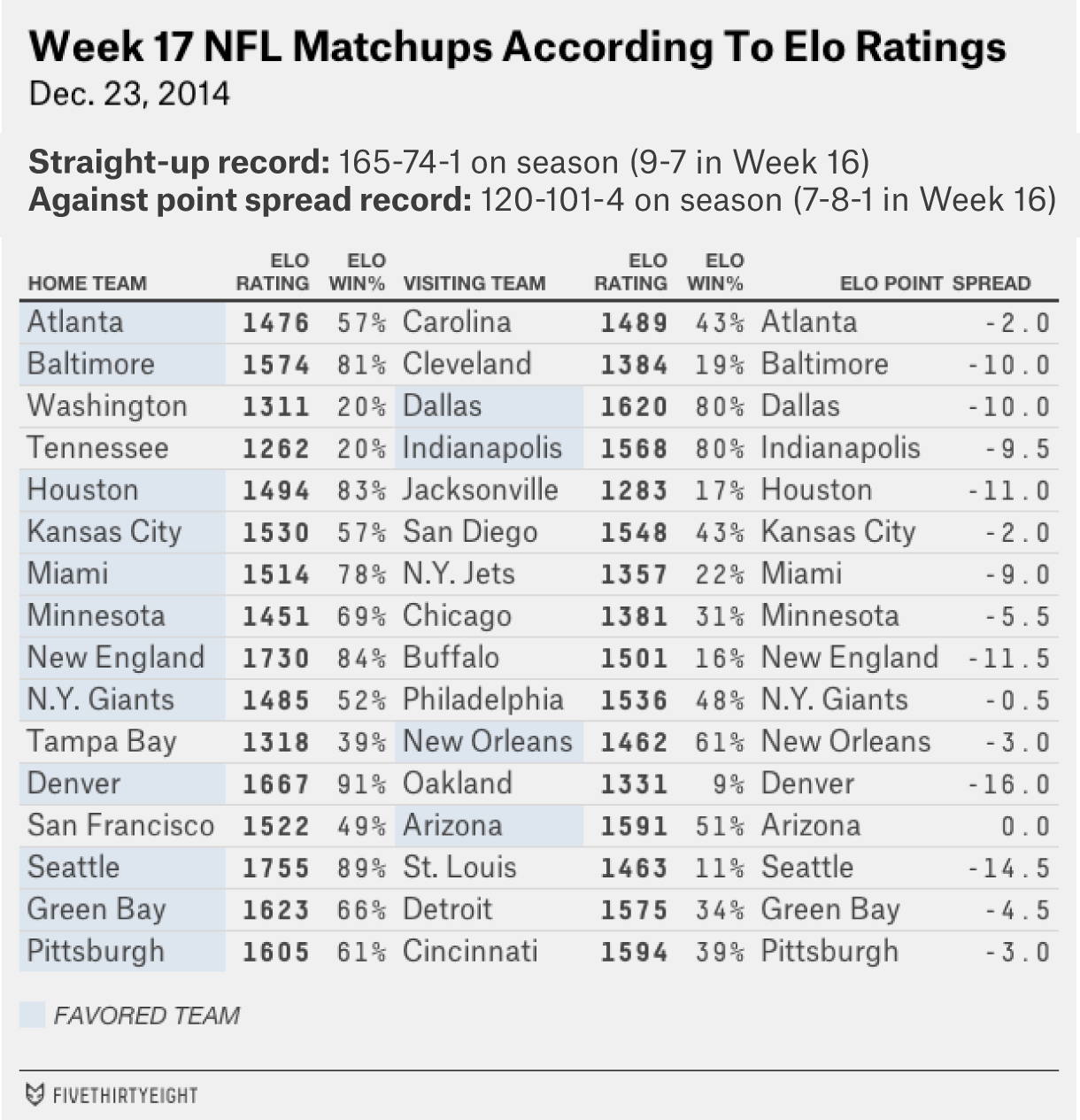 After a middling week for the Elo point spreads, we’ll issue the usual reminder that we don’t expect them to beat Vegas over the long term, even though they’ve fared pretty well so far this season. That’s especially the case in the final week or two of the NFL regular season, when teams may be resting their starters or otherwise have varying degrees of motivation to win their games — information that Vegas can account for but Elo does not.