Teams from the South of England are currently dominating the Premier League.

London-based Chelsea is in first place, and is a prohibitive favorite to win the title. Southampton — the southernmost team in the league — currently sits second. Both teams won their games last weekend, beating teams from the North and Midlands. West Ham, also based in London, is in fourth.

While the North (working class, the Beatles) dominated the league for decades, the South (London, the Rolling Stones) has slowly been gaining ground. This process has been driven by culture, politics and the economy.

Using the mammoth football data set compiled by one of this article’s authors (James),1 we can quantify, and map, the migration of power in the world’s top soccer league over the past 126 years.

England has always had strong regional identities and overt class distinctions. The biggest of these is between North and South. The most obvious differences between these regions are in dialect, culture, politics and economy, but there also exists a North-South football divide. Indeed, the story of the origins of English football is about tensions between working-class Northerners and upper-class Southerners.

Here is the geography of English top-tier football league champions: 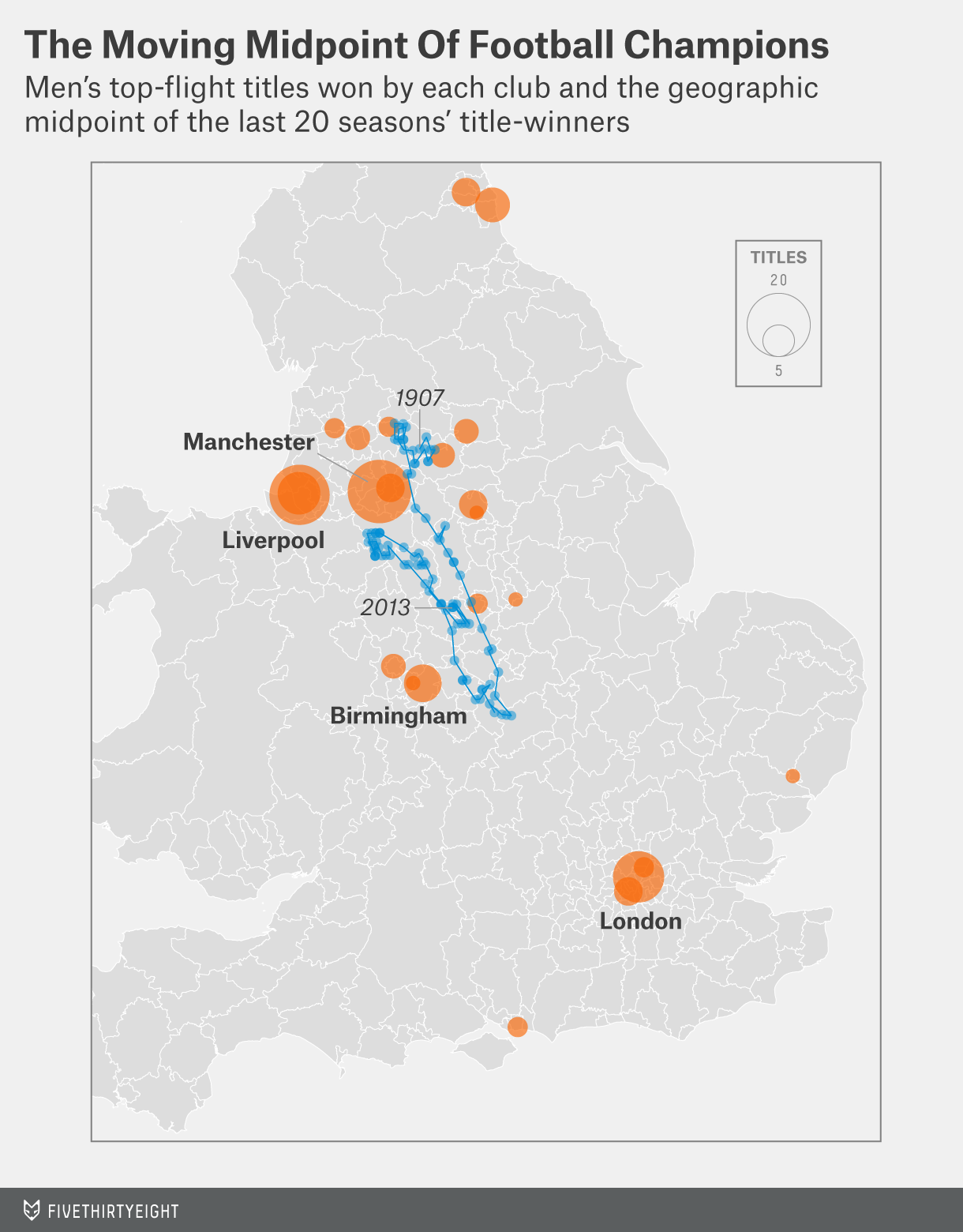 Dots show the location of teams that have won the league championship, with the size representing the number of titles. The line is a 20-year moving average of the latitudes and longitudes of winners of the top tier — the center of gravity.2

The rules of modern soccer were developed in England in 1863 when the representatives of 11 London clubs and elite private schools (in the South) convened at the Freemasons’ Tavern to establish what would become the Football Association, the game’s governing body. The rules were further modified in 1869 — when handballs were outlawed — leading to more or less the game we know today.

Amateur teams, composed of upper class gentlemen from the South of England, enjoyed early success in the first major national competition — the FA Cup — which began in 1871. However, teams from the North and Midlands quickly sprang up out of religious community organizations, schools and trade unions. Football, an accessible, democratic game, caught fire in the North.

By the mid-1880s, talented players from these areas and Scotland started to be paid for their services in the increasingly competitive North. This led to several years of bitter arguments between the Northern clubs and the powerful, and Southern-founded, Football Association. Central to this dispute were the original men in blazers — two of the earliest presidents of the FA, Colonel Sir Francis Marindin and Lord Kinnaird, established members of the Southern upper crust, and avowed amateur footballers.3

Wanting to capitalize on the huge popularity of football among working-class fans, Northern teams formed their own professional league, demanding that the FA accept their will. In 1888, the Football League was founded — six teams from the North and six from the Midlands. It was an immediate success. More teams from the North and Midlands were added and a second division was established in 1892.

The early decades of the Football League were dominated by these Northern and Midland teams. Notably, Aston Villa and Sunderland won six and five titles, respectively, before World War I. It wasn’t until 1931 that a Southern team (Arsenal) was crowned league champion. Indeed, until Arsenal’s FA Cup win in 1930, Northern and Midland teams had also won every single FA Cup since 1883, except for London’s Tottenham Hotspur in 1901. Even that team started five Scots, three Northerners, two Welshman and an Irishman. 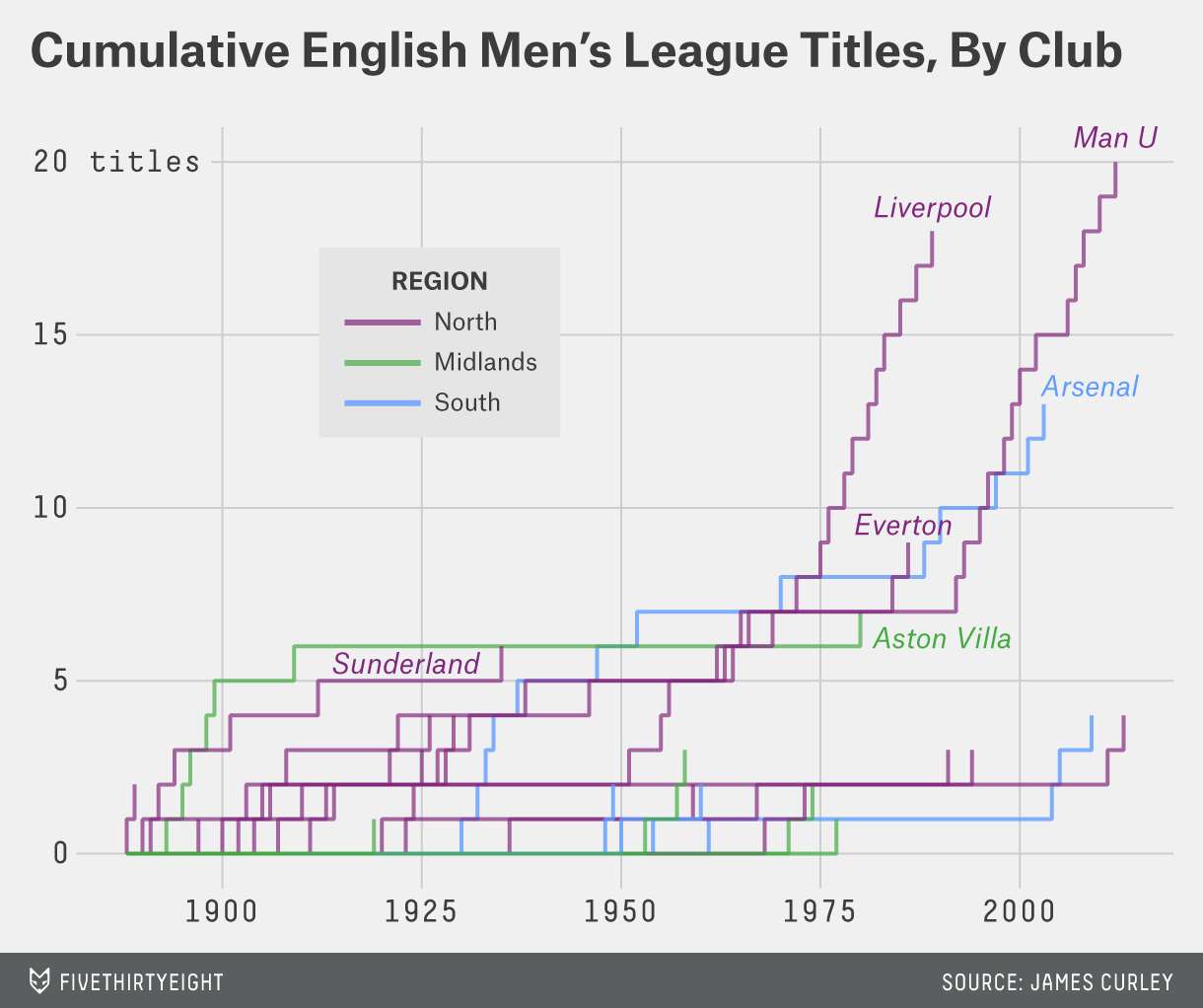 The Football League became truly national at the start of the 1920-21 season when a third division, composed entirely of teams from the South of England, was created. Over the following decades more Southern teams — Portsmouth, Charlton Athletic, Fulham — gradually rose through successive promotions to find a place in the top tier.

While the league creeped south, it retained its strong Northern flavor. The continued domination of the North is best seen by examining the number of championships piled up by teams from this region between 1920 and 1980. Only Arsenal from the South provided anything like competition for Northern teams such as Everton, Liverpool and Manchester United, all of which won multiple titles.

The fabric of English society changed dramatically during the 1980s. The force that was Margaret Thatcher and her Conservative government’s right-wing policies led to a boom in the prosperity of the City of London and the South in general, while left-wing trade union power waned.

Unemployment in the United Kingdom rose from 5.7 percent in 1979, the year Thatcher took office, to 13 percent in 1983. This aggravated the economic inequality between North and South, and many Northern cities and people suffered financially. These wider economic and political changes were mirrored by shifts in the representation of Northern and Southern soccer teams in England’s top division.

Here are the average latitudes of all teams in the top division of English football, by season: 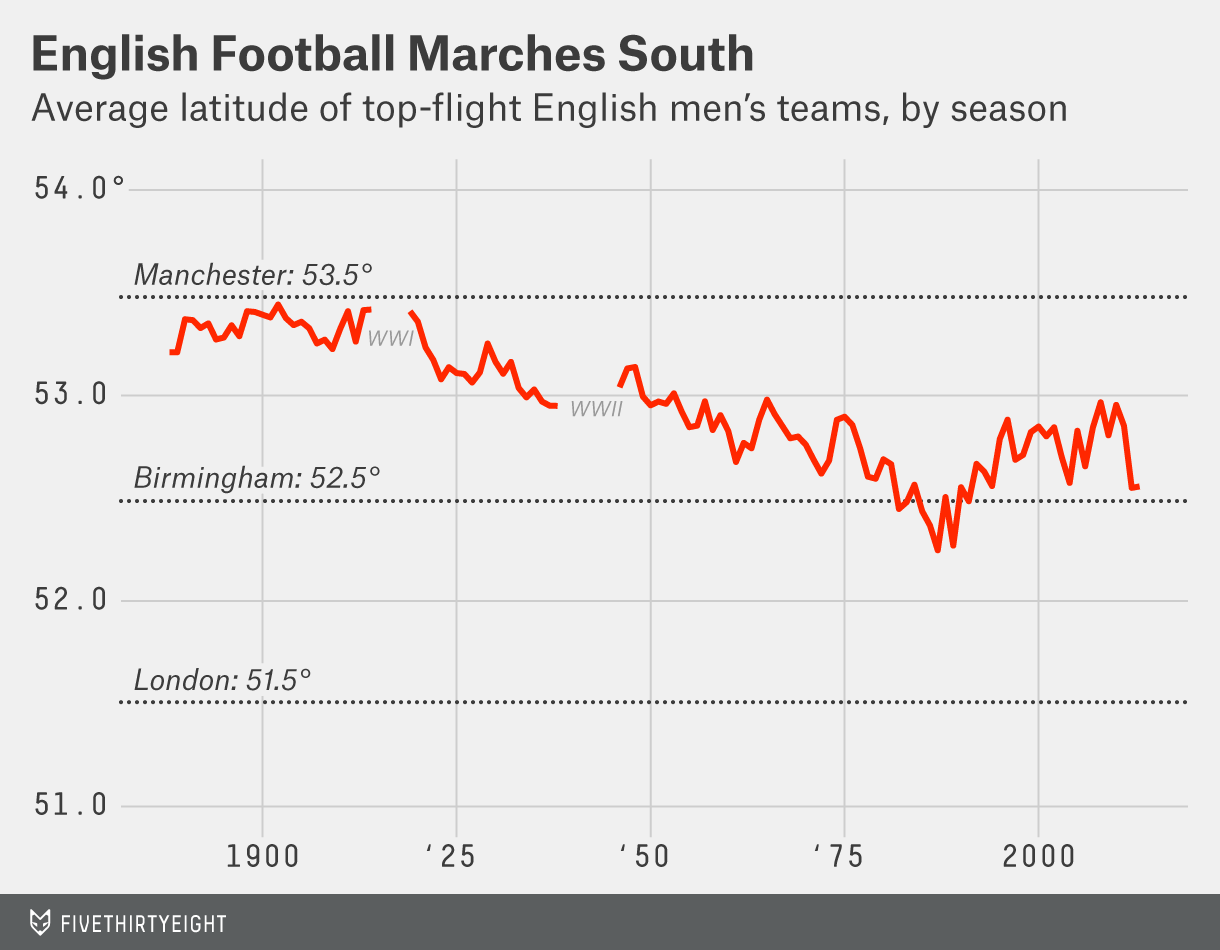 Only seven times in history has the average latitude of England’s top-flight soccer teams dipped beneath Birmingham — often called England’s “second city” and considered to be a marker of the middle of the country. The first was in 1982, three years after Thatcher became prime minister. The last was in 1991, one year after Thatcher left Downing Street.

Smaller Southern teams — Watford, Wimbledon, Millwall and Oxford United (bankrolled by the business tycoon Robert Maxwell) — made the top tier for the first time during this decade, while others such as Charlton Athletic and Luton Town returned after long absences. The most Southern-skewed season was 1987-88. Although the top four teams all came from the North and Midlands — Manchester United, Liverpool, Nottingham Forest and Everton — 13 of the remaining 17 sides were Southern.

Meanwhile, many former great Northern and Midland teams suffered. Bolton Wanderers, Burnley, Preston North End and Wolverhampton Wanderers, all founding members of the Football League, were relegated to the fourth tier during the 1980s.

The nature of English soccer changed forever with the formation of the Premier League in 1992, the huge influx of money and the globalization of the game.

In the early years of the EPL, there was a brief mini-revival for several historically strong Northern teams, like Middlesbrough, Leicester City, Bolton, Sunderland and Nottingham Forest, that had suffered during the 1980s. Each was promoted back to the top tier during the mid-1990s. Most notably, Blackburn Rovers, bankrolled by local businessman Jack Walker, won the Premier League in 1995.

But these teams have all since struggled to consistently retain their places in the EPL, as survival and success are determined more and more by financial muscle. Footprints of the old historical North-South divide are still evident in the composition of teams in England’s top tier but, in order to compete, EPL teams have increasingly become global franchises, taken over by uber-wealthy foreign owners, many of whom have preferred to invest in teams near London, the nation’s capital.

English football in the 19th and 20th centuries was fueled by the fanaticism of working-class fans, going to watch their local heroes play for their hometown team. The connection between fans and their clubs was built upon these regional and local ties. In the 21st century, the super-successful, globalized EPL has seen the diminishment of some of these strong regional identities that had mattered so much.

James Curley is an assistant professor in the Psychology Department at Columbia University. @jalapic