Only one home team lost last weekend in the English Premier League. It was the same the weekend before. How unusual is this? Or, put another way, how significant is home-field advantage in soccer?

Using a data set of scores compiled by one of this article’s authors (James), we can quantify the home team’s advantage in English football over the past 126 years. Here are the percentages of home wins, visitor wins and draws, by year, since the founding of the league in 1888 (the data is from all games played in the top four tiers of the English football pyramid, or just shy of 200,000 games): 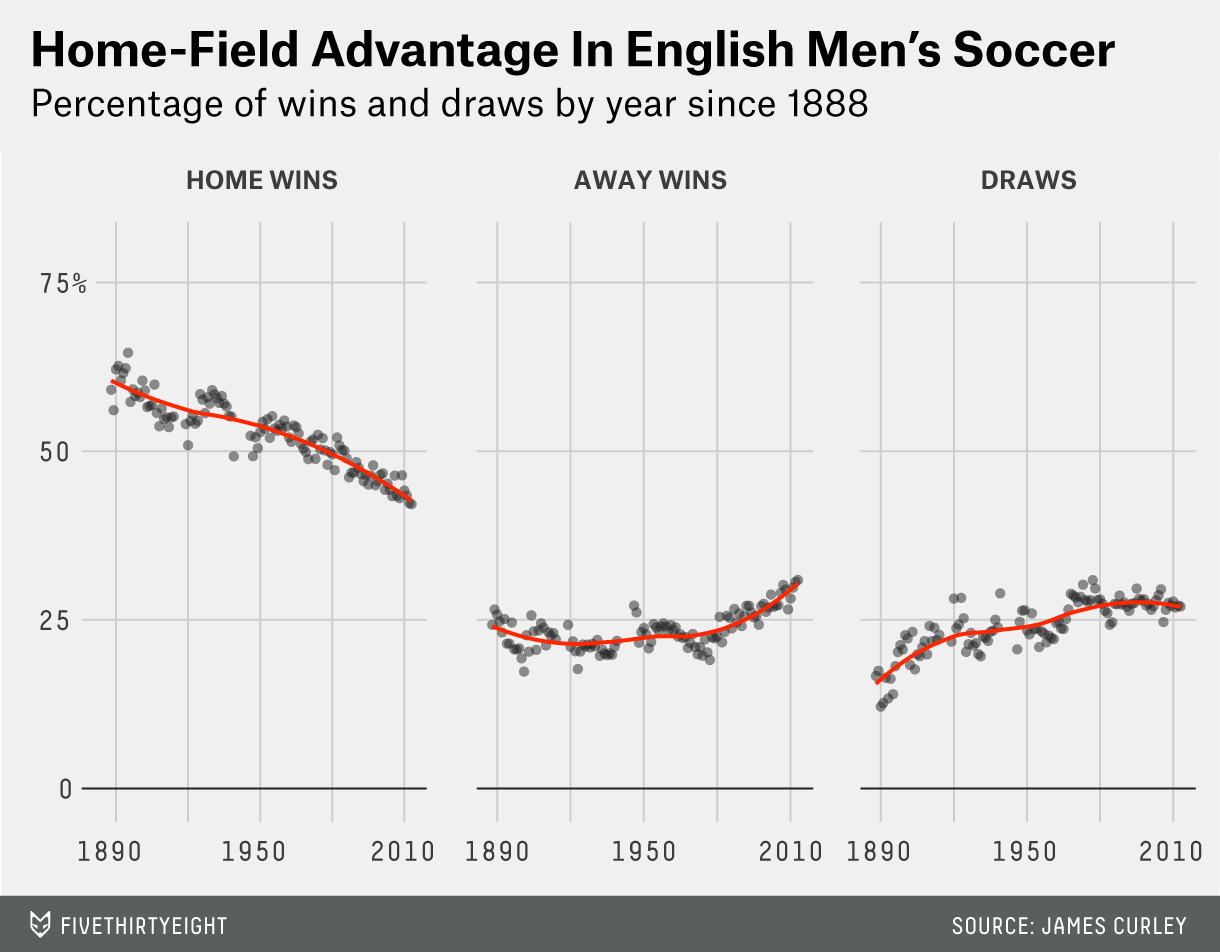 What’s responsible for this dramatic shift? Most immediately, it’s the result of a decrease in home-team scoring. Here are the average home and away goals per game, by year: 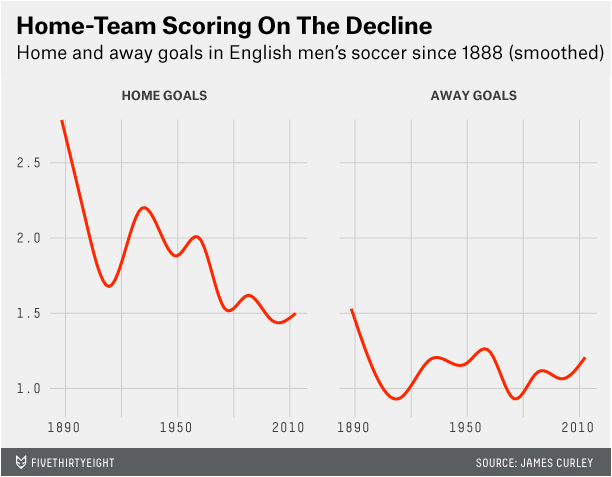 Although scoring for either side has fluctuated, visitor goals have remained relatively constant, floating mostly between 1.00 and 1.3 per game. Home goals have fallen to roughly 1.5 per game from more than 2.5. The average difference (home goals minus away goals) has fallen to about 0.3 goals last year from about 1.1 goals at the league’s founding.

A laundry list of explanations for home-field advantage have been offered over the years: partisan crowds, influenced officials, the comforts of home, the hardships of travel, stadium accommodations that favor the home team (e.g. nicer locker rooms or grass mowed to the liking of the players), even “home-cooked” stoppage time.

Just as many reasons have been offered for the advantage’s decline, in soccer and elsewhere: easier access to tickets for away fans through sites like StubHub, more comfortable travel accommodations, better oversight of officials, the gentrification of soccer crowds — or maybe just random chance.1

Economists Mark Koyama and J. James Reade noticed this decline, too, and offered a provocative explanation in a 2008 paper. Writing mainly about English soccer, they argued that the effort put forth by players depends on how much they are “monitored” by their team’s fans. Players tend to put in more effort, they write, when their fans can observe it — they tend not to shirk. More of their fans observe this effort during a home game, of course. But that fact is mitigated by televised soccer. Television serves as a “monitoring technology,” and enables fans of the visiting team to monitor their players’ performance more easily. This, in turn, increases the effort put forth by players of visiting teams. Therefore, Koyama and Reade conclude, the increase of televised soccer has depressed home-field advantage.

While a constellation of factors is likely responsible for shifts in advantage, one especially convincing explanation is changes in officiating.

The soccer referee was introduced in roughly his modern-day form in 1891 (minus the aerosol spray). A single official can have an enormous influence on a game — an influence rarely rivaled in other sports. One reason is that soccer games are low-scoring and a referee can, in many cases, effectively award a goal to one team or the other by calling for a penalty kick. Since 1992, penalty kicks in the Premier League have led to goals 85 percent of the time. And there has been a systematic bias of awarding penalty kicks to the home team: Of 1,666 penalties called over the last two-plus decades, 1,051 (or 63 percent) went to the home team. With the exception of the 2001-2 season, home teams have won more penalties every single year. There are, on average, 75 penalties awarded each season, or about one every fifth game.

Koyama and Reade noted that a similar home-team bias has been found for the “awarding” of yellow and red cards. High-leverage biases could also manifest in the calling of close-range free kicks, corner kicks and offsides violations. It often hasn’t taken much to influence the outcome of a soccer game.

But with the rise to prominence of English football over the past 100-plus years2 came correspondent increases in money, exposure,3 professionalization, organization, oversight, monitoring and evaluation of the league. All these could have lowered referee bias toward home sides.

While hard data on historical referee bias is hard to come by, there is some evidence. There has been a slight downward trend in penalty-kick bias since the founding of the Premier League, for example. In the 1992-3 season, 74 percent of penalties were awarded to the home team. Last season, just 55 percent were.

Soccer’s long-diminishing home-field advantage seems to be the exception in sports, not the rule. Here are home teams’ regular-season winning percentages for the four major American sports. (For simplicity, we’ve included ties as half wins, where applicable.) 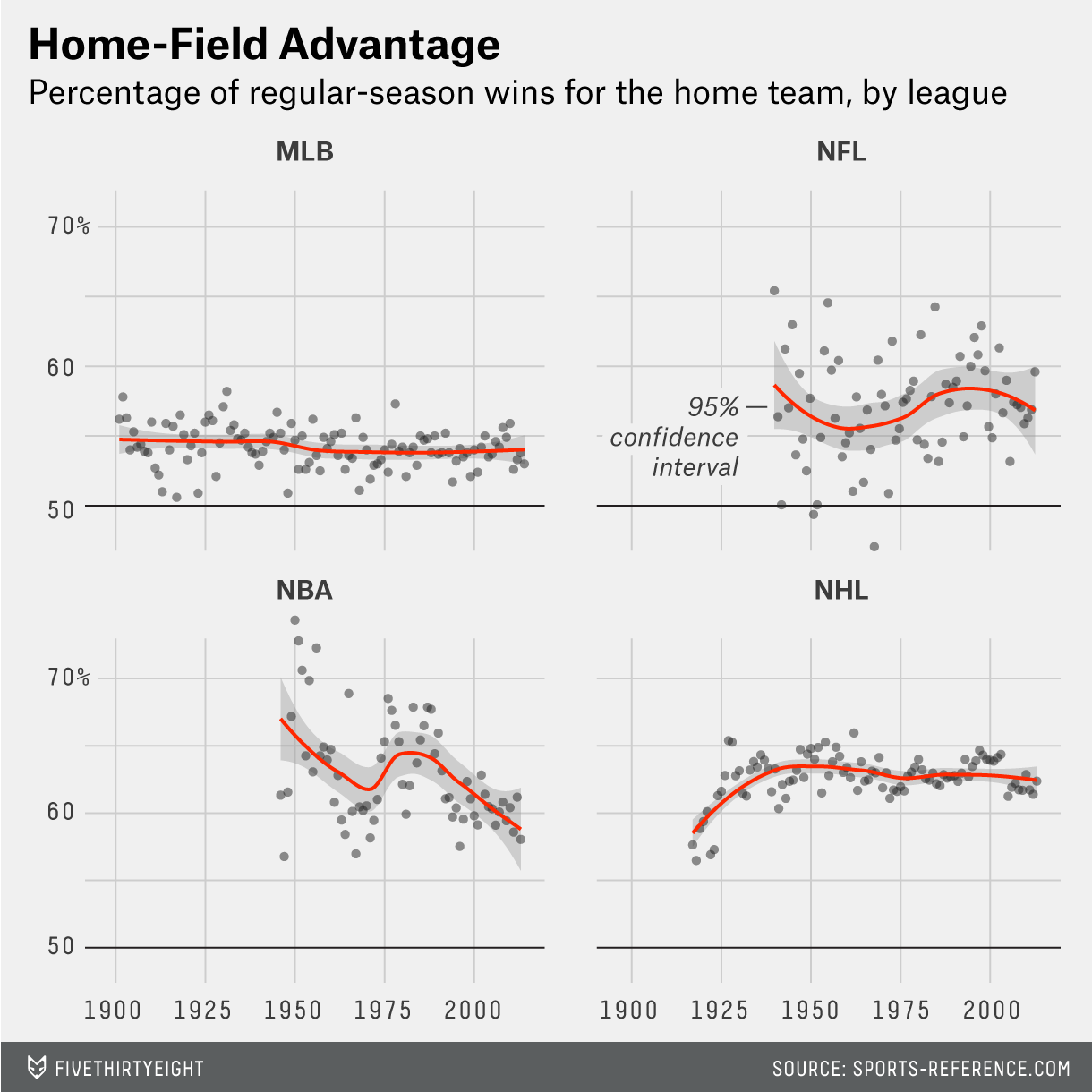 With the exception of four NFL seasons, home teams won more than visitors every year. Basketball and hockey typically show the most sizable home-field advantages. Basketball’s home teams have historically won at nearly a 70 percent clip, though that has dipped to around 60 percent in recent years. NHL home teams have won consistently between 60 percent and 65 percent of their games over the league’s history.

While no American sport has shown the sustained decline in home-field advantage that English soccer has — a mark against Koyama and Reade’s “monitoring technology” hypothesis — there are hints of decreases, especially in basketball. That makes sense. Basketball is another sport that can be heavily influenced by the subjectivity of officials.

James Curley is an assistant professor in the Psychology Department at Columbia University. @jalapic