UPDATE (Aug. 8, 10:14 a.m.): With the opening weekend of the Premier League upon us, we’re recycling this piece from September 2014 about England’s great football pyramid. There’s a whole lot more than just Chelsea and Arsenal.

Swansea City was founded in 1912 as Swansea Town. It hovered in the middling leagues of the English sport for much of the century. But in the 1960s, the team tumbled down the ranks, eventually requiring a financial rescue package and High Court approval just to survive. In 2001, it was sold — for a pound. But fortunes turned once again, for the better. It was promoted in 2005, 2008 and, finally, in 2011. The team had arrived. It was in the Premier League.

Cinderella got her slipper.

But the EPL is just the tip of the English football iceberg. It’s the most visible element of an intricate hierarchy of some 7,000 football teams, playing under the auspices of the Football Association (the FA) — let’s call it the Great Football Pyramid of England. In terms of the number of teams, the Premier League represents about one-quarter of 1 percent of it. (This and much of the empirics here rely on information from football stats site ThePyramid.info, which in turn assembled data from the FA’s league administration website, and individual clubs’ and leagues’ sites.)

The pyramid has more than 20 levels and hundreds of leagues. This is what it looks like:

Importantly, unlike its analog in Giza, the Great Football Pyramid of England is not set in stone. The levels are linked through a process of promotion and relegation. Depending on the specific rules of a given tier, a number of teams that perform the best get to move up a level (promotion), and a number of teams that perform the worst have to move down a level (relegation). Each year, there is a minor upheaval of the hierarchy — a shifting of the pyramid. The romance, the beauty of this system is the following: Given strong enough performances and enough minor upheavals, in theory, any team can climb the ranks and, eventually, breathe the rarefied Premier League air.

Let’s take a deep dive into — or, rather, a steep climb down the side of — the English football pyramid.

On top of the pyramid — the capstone, Level 1 — is the Premier League. Twenty teams compose it. Some — Manchester United, Arsenal, Liverpool, Chelsea — are probably well-known to U.S. sports fans. A few — Hull City, Stoke City, West Bromwich Albion — probably are not. But all of these are competing for the most coveted award in English football: the Premier League title. Unlike most American sports, it’s the regular-season winner that matters here. There are no playoffs or championship series. Also unlike most American sports, any team may be taking part in a number of competitions at once — the league, the FA Cup, the League Cup — but the one that really matters these days is the league title.

As a result of the system of promotion and relegation, not every team has always had the pleasure of this competition. Like Swansea City, just about 10 years ago, Hull City was languishing. In 2003, the Tigers were members of the unglamorous fourth tier of the pyramid. But this team, too, climbed the summit. But, no rest for weary — Hull City are 5,000-to-1 dogs to win the title, and 9-2 to get relegated. Hull City will take on Newcastle United — four-time champions of England — this weekend.

The Premier League was formed, in its present incarnation, in 1992. Most of the teams in the Premier League for the 2014-15 season haven’t always been there. Here are the histories of the league’s current teams, by level of pyramid2: 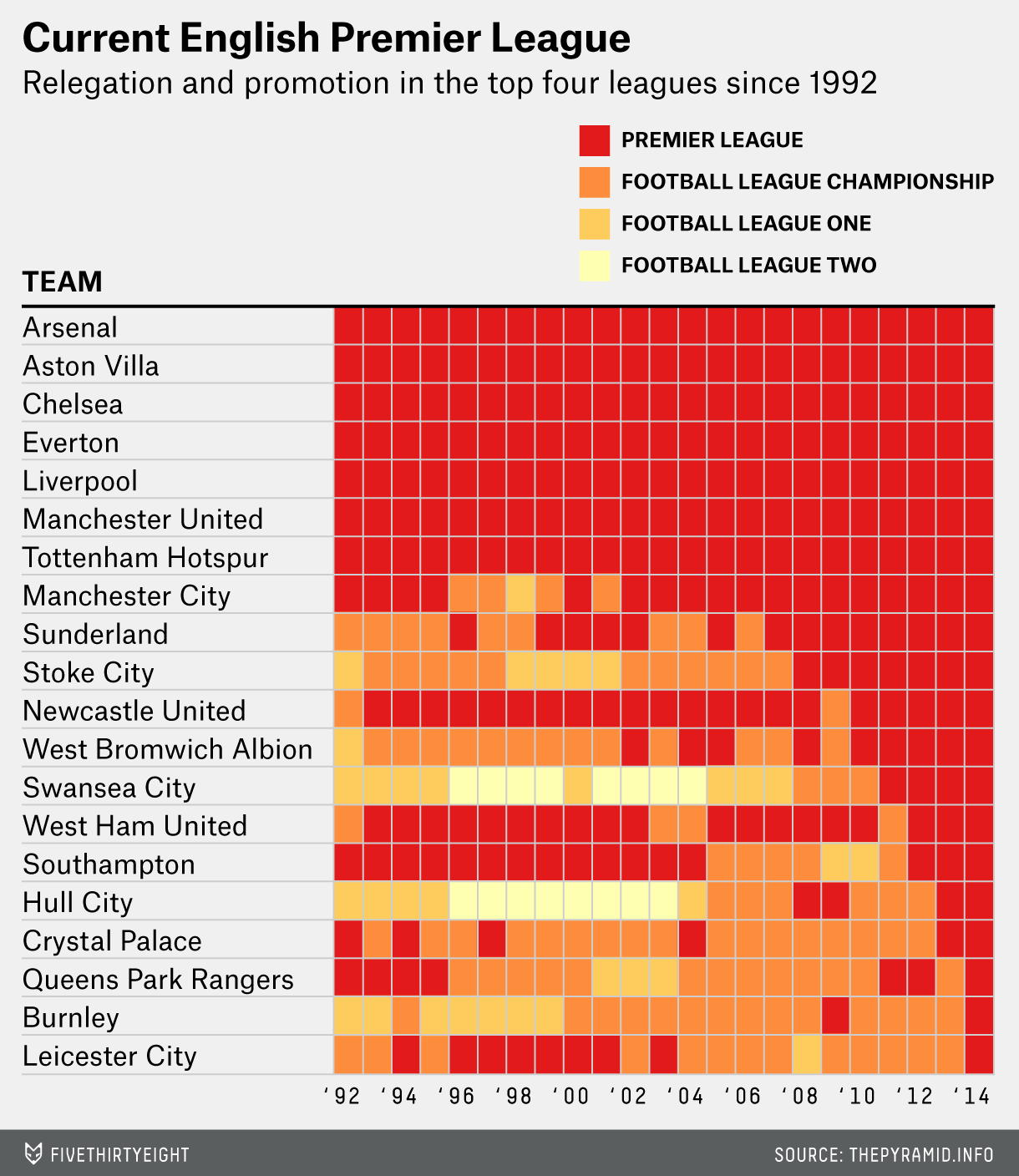 Level 2, just beneath the Premiership, is the Football League Championship. Each year, 24 teams compete here for three coveted promotions to the Premier League. The top two finishers at the end of the season earn automatic promotion. The next four, the third- to sixth-place finishers, compete in a playoff for the final promotion.

The secession of the Premier League by no means drained the Football League of its meaning. The consulting firm Deloitte has calculated that promotion to the Premier League is worth about $200 million in extra revenue for a Football League team. In some cases, the difference between promotion and relegation can come down to one game. And in some cases, in can come down to one minute.

A moment from the end of last season well exhibits the high drama that plays out in the Football League. Facing elimination, and another season in the second tier, Queens Park Rangers doggedly advance the ball up the field, with the seconds waning. After a cross and a misplayed clearance, QPR’s Bobby Zamora sends his team to the Premiership in the last minute of the last game of the season — in a decisive part of the playoff to determine the promoted team. They call it the “120 million pound goal.”

Often, the difference between a lengthy stint in the Football League and Premiership glory is money — the investment of wealthy club backers. The fascinating behind-the-scenes documentary “The Four Year Plan,” for example, explores the investment by a group of billionaires into Queens Park Rangers, an attempt to elevate the team to the Premiership. Money can secure players, players can secure wins, and wins can secure promotion. And promotion means, well, money.

These leagues are not without their storied members. Football League One is currently the home of one of the most interesting teams in the history of the English football hierarchy — Milton Keynes Dons.

Well, sort of. They weren’t always known as MK Dons.

But who owns this history has been a subject of bitter controversy. In 2003, the team relocated to a new stadium, about 60 miles away in the town of Milton Keynes, taking the town’s name but retaining Wimbledon’s “Dons” nickname — and laying a claim to Wimbledon F.C.’s history and hardware. But there is another Dons club, which objects. AFC Wimbledon, based in southwest London, was formed in 2002 by fans dissatisfied with the move of their former home team.

The National League System (Levels 5 to 11)

The next seven levels of the pyramid (Levels 5 through 11) are referred to as the National League System.

Anyone familiar with the details of, say, royal succession, might not be surprised to learn of the arcane nature of the depths of the English football pyramid. Anyone considering a certainly non-habit-forming alternative to Ambien might do well to peruse a guide to club structures of the English league system.

Teams competing in the National League System have to squint to see the Premier League above them, but membership here still matters — a lot. Teams in this section of the pyramid are the last eligible to compete in the FA Cup — a prestigious knockout tournament and the oldest football tournament played. Think March Madness — Premiership teams compete alongside teams many rungs beneath them, and a single loss sends them home. As in basketball, this creates fairy-tale possibilities — giant-killing, and Cinderella runs.3 (However, the defending champions of the FA Cup are the elite Arsenal squad.)

The NCAA basketball tournament, of course, begins with 68 teams. The 2013-14 instance of the FA Cup began with 737. (Imagine March Madness with every Division I team, every Division II team and maybe some really good high school teams.) And a low-level team need not win the Cup to see a windfall. The FA awards 18,000 pounds even for a first-round win — a potentially huge boon to a club trying to climb the ladder or stay afloat.

Teams in the lower regions of this group can also compete for other FA hardware, including the FA Trophy (open to Levels 5 through 8, with 50,000 pounds going to the winner) and the FA Vase (Levels 9 through 11, 25,000 pounds). In just these two relatively minor competitions, last year the FA awarded 1.6 million pounds, or about $2.7 million, in prize money.

Here’s a summary of the competitions open to the teams in the National League System and above (this excludes, of course, the regular-season competitions being played in the leagues themselves): 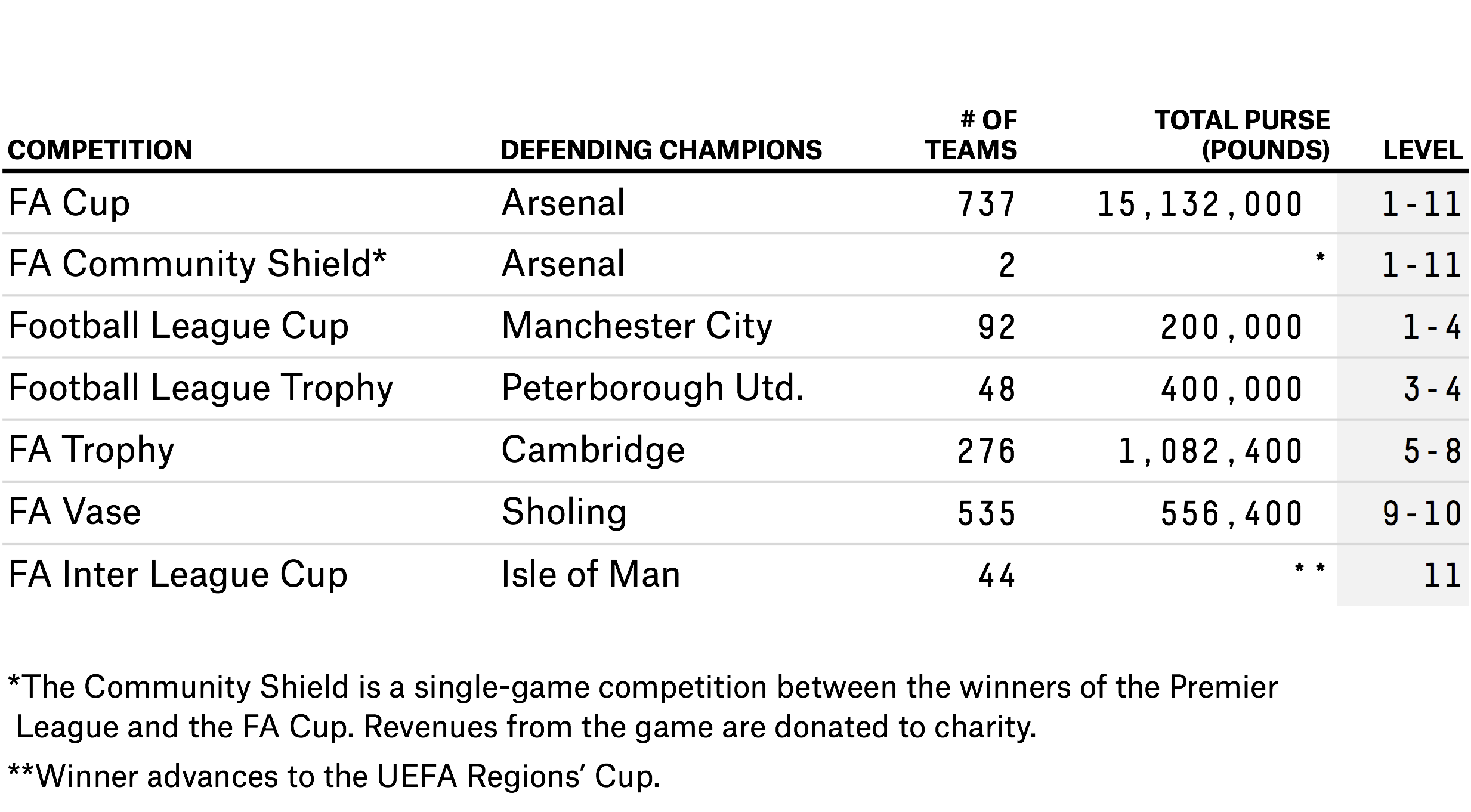 Believe it or not, we’re not through yet. Not even, like, close. Behold the “non-League” teams.

By my calculations, from the ThePyramid’s information, there are 446 separate divisions hosting competition at Level 12 and below. And there are 5,510 teams! Depending on how many players low-tier teams keep on their rosters, there is something like 100,000 soccer players on teams in the pyramid.

But the land of 32 million pound transfer fees this ain’t.

The rules of the Duchy League — in Level 15 and sponsored by J.J. Jones & Sons building contractors — state, “If … two Clubs have the same or similar colours, the away team shall make the change. Any team not having a change of colours or delaying the kick-off by not having a change shall be fined £10.00.”

The East Sussex Football League — Level 12, sponsored by ADA Turkish Barbecue & Meze Bar — charges a one pound fee for each player a team registers. Referees in this league earn 29 pounds a match. Unable, for some reason, to play in your normal team colors in this league? Sorry, that’ll be 20 pounds.

What these teams lack in salary or facilities, they make up for in character, including their names, which are fantastic and undeniably English. A sample: Uphill Castle, Viney St. Swithins, the Kidlington Old Boys, the Victoria Baptists, the Didcot Casuals, Capel Plough, Quedgeley Wanderers, Kimberley Miners Welfare, Uffington United.

To give a sense of scope, here’s a histogram of these leagues by size: 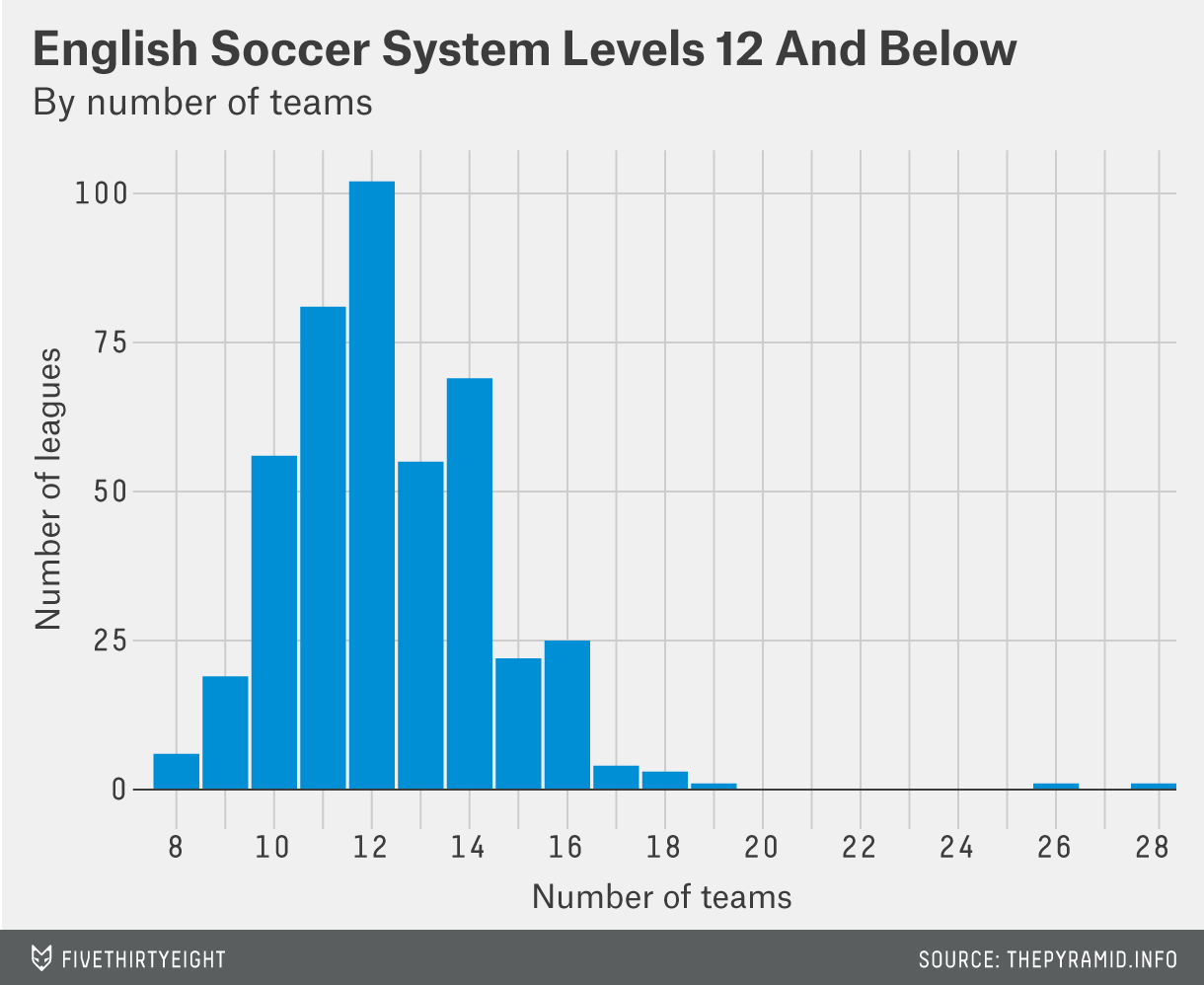 When the 20 Premier League teams do battle this weekend, millions will watch. But thousands of other English football teams will do battle, too. And, for the most part, the pyramid will not be televised.