In our quest to solve baseball riddles, we sometimes turn to our friends on Twitter for assistance for topics worth tackling. This one, from @ursus_marit, got our attention.

In the eight days since this question was posed, home teams have enjoyed some moderate success. Still, the broader point stands: Road teams are faring unusually well this year. We’re on pace to see the fourth-smallest home-field advantage in the past 20 years, with home teams winning just 52.7 percent of games. There could be any number of reasons for this happening, from random chance to the possibility that Major League Baseball’s closer supervision of umpires is curbing Eric Gregg-level home-cooking calls on balls and strikes. It’s all interesting fodder for backward-looking conversations.

What interests us more are the forward-looking implications for this statistical anomaly. Every October, we hear about the challenge of winning games on the road during the playoffs. Could the biggest outliers — the teams performing much better on the road than at home — have an advantage in the postseason?

To conduct this experiment, we looked at the entirety of the League Championship Series era (starting in 1969) and tallied home and road winning percentages for every team during the regular season. We then gathered the results of every playoff game during those four-and-a-half decades from Retrosheet.org, noting which teams played at home and which ones played on the road.

We controlled for obvious variables, such as overall record and opponents’ record. We then asked our fundamental question: Is there a significant effect that improves playoff outcome predictions, if we also include how much better or worse a team tended to play in a particular location? 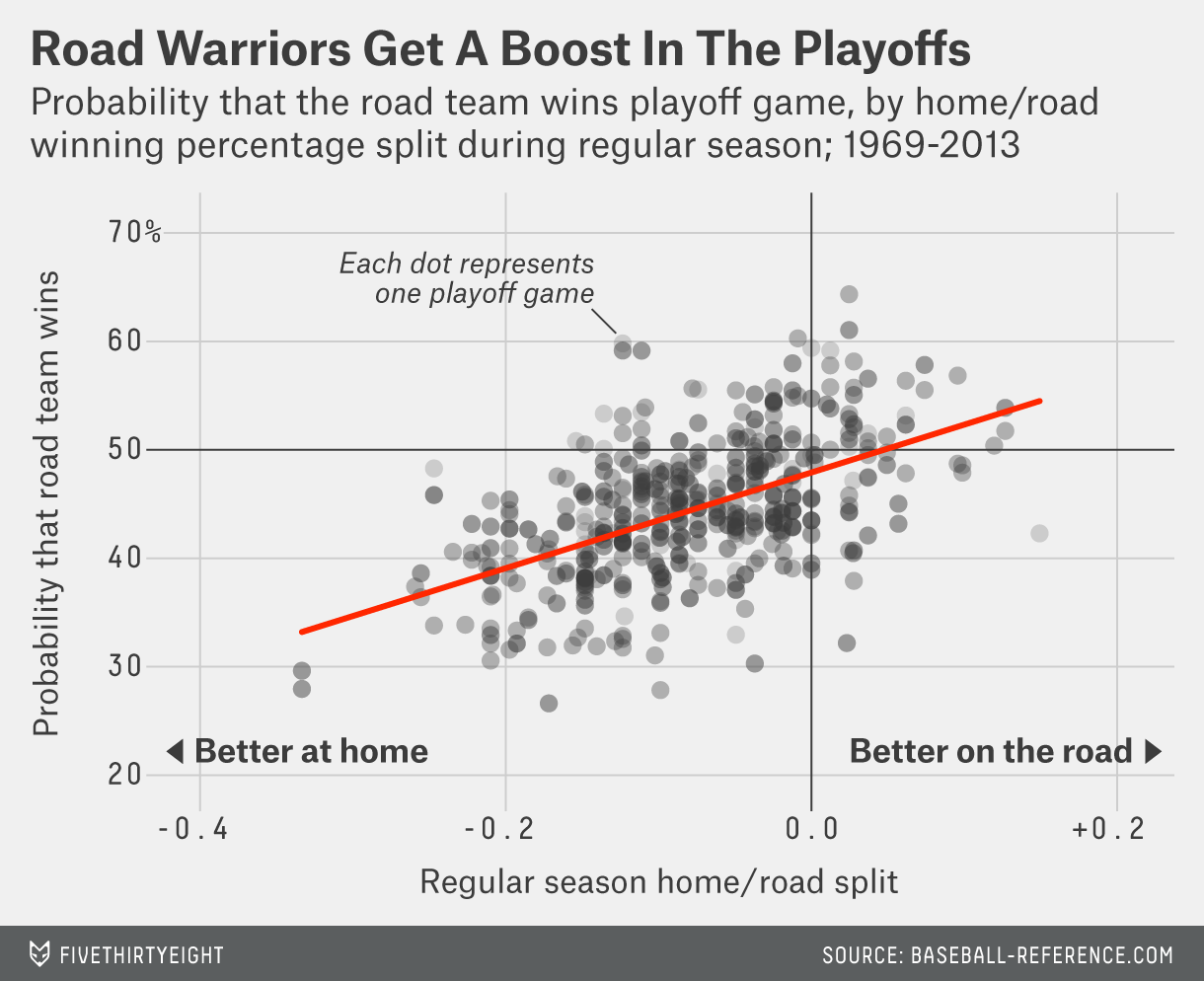 The 1969-2013 playoff team with the biggest positive gap between its regular road and home records is the 1981 Kansas City Royals. That’s a bit of a cheat, because that was a strike-shortened season that saw a couple of mediocre teams play into October, thanks to an impromptu rule that granted playoff spots to the best teams from the first and second half of that season. So the Royals cracked the postseason that year, despite posting an overall record that was three games under .500, with a terrible 19-28 home record that netted a .404 home winning percentage.

The table below shows the top 20 playoff teams since 1969, as ranked by biggest positive gap between road and home records: 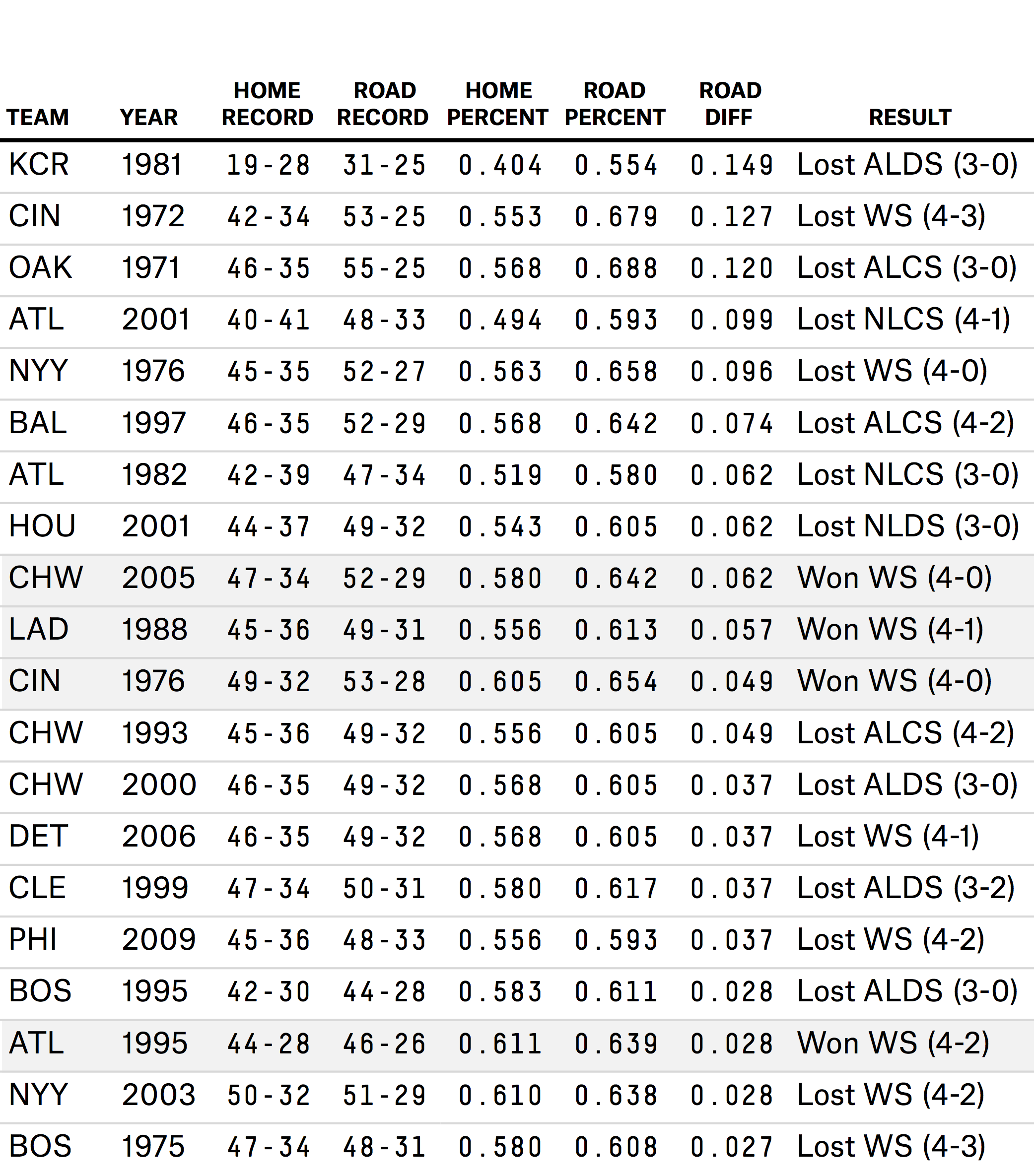 Now here’s the million-dollar question: Which potential playoff teams are playing much better on the road this year than at home?

Here again, the Royals make an appearance, this time as the playoff contender with the third-biggest positive road-to-home split. Kansas City sits at 42-32 (.568) on the road this season vs. 40-35 (.533) at home, a gap of .035. The Royals are battling for their playoff lives, holding a two-game lead in the race for the second wild-card spot — not counting a soon-to-be-completed suspended game in which they trailed 4-2 in the 10th inning before rain pushed the game’s end to Sept. 22. That means if the playoffs were to start today, Kansas City would travel to Oakland for a one-game playoff. With veteran ace James Shields potentially getting the call for that game,3 the A’s limping to the finish line, and KC being tough on the road, that could be a favorable matchup for the Royals.

Bachelor No. 2 is the Los Angeles Dodgers. They own the best road record in the National League, a stellar 46-29 (.613), but a more modest home record of 40-35 (.533) — a gap of .080. The Dodgers sit just a half-game behind the Washington Nationals for best overall record in the NL, meaning they have a chance to secure home-field advantage until the World Series. On one hand, this would lessen the importance of being world-beaters on the road. On the other, having an unusually strong road record in the regular season correlates to overall success in the playoffs, not just road playoff success.

But the most intriguing sleeper might be the Seattle Mariners. The Mariners own the best road record in the American League, a gaudy 42-29 (.592), but just a 38-40 (.487) mark at home — a huge gap of .105 that would be the fourth-largest for any playoff team in the past 45 years. The Mariners are the team on the Royals’ heels. They have a killer one-two starting pitcher combination of Felix Hernandez and Hisashi Iwakuma,4 potentially setting up Iwakuma to start a one-game playoff on the road (assuming the schedule holds and King Felix starts the final game of the regular season). They also face a remaining schedule that could bode well in their quest to crash the postseason dance: a tough four-game set in Anaheim, then three against a weak Houston Astros team, four against a Toronto Blue Jays team that will probably be eliminated by then, and three final games against the Halos — who will almost certainly have clinched the AL West, setting up a potentially easy series against second-string talent while the Angels’ stars rest. And more than any other team, Seattle won’t bat an eyelash at the severe home/road split left in these final two weeks; 10 games on the road vs. just three remaining at home could work out great for the Mariners’ playoff hopes.

So, keep an eye on these road warriors as the regular season enters its home stretch. If history is any guide, they might surprise in the playoffs … assuming they get that far.